Can a largely cash-based society become the leader in bank-issued digital currencies?

Japan is known as a land of contrasts. A country where serenity and tranquillity can be found in the middle of the hustle and bustle of large global cities, where proud traditionalism stands side-by-side with the developers and innovators of breakthrough technologies, where kimonos are often found next to the latest fashion trends.

This contradictory tendency is no different in Japan’s cryptocurrency ecosystem. It ranks as one of the top crypto-friendly nations on Earth, with favorable and forward-thinking cryptocurrency regulations. They made Bitcoin legal tender in 2017, and at one point, the Japanese yen dominated the buying and trading of Bitcoin. The Japanese Financial Services Agency (FSA) has also received 190 cryptocurrency exchange license applications. 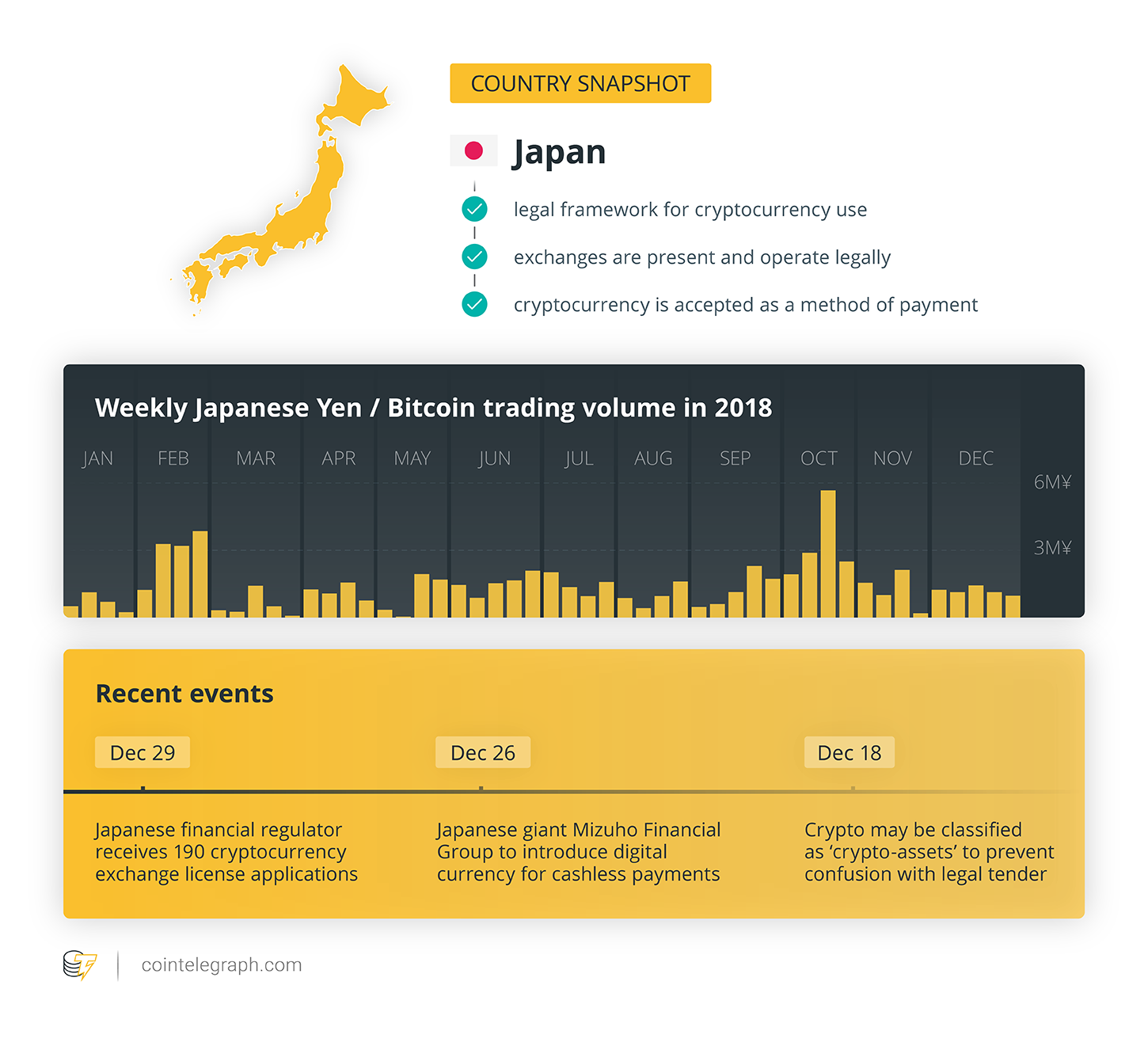 Yet, even though Japan has played host to some of the biggest crypto hacks to date (including Mt. Gox and Coincheck), they are still mostly a cash-based society where about 65 percent of transactions are done in cash (more than twice the 32 percent average among other rich economies) and, perhaps because of this, the Bank of Japan has repeatedly stated that they see no need or demand for a central bank-issued digital currency and that it is not an effective economic tool.

According to Yuko Kawai, the head of the Fintech Center at the Bank of Japan, because of the low demand, the central bank is not at the stage yet where they will consider issuing a digital currency:

“To begin with, do we really need a digital currency in the nation where cashless living isn’t making much progress?”

Despite these supposedly adverse sentiments, several banks in Japan are actually launching their own digital currencies.

The Mizuho Financial Group announced in December 2018 that they will be issuing their own digital currency in March 2019. They are one of the largest financial institutions in the world that offers financial and strategic services, with 60,000 employees and $1.9 trillion assets under management.

The digital currency will be the first to be issued by a megabank and will enable users to make cashless payments with their smartphones, as well as allowing free cash transfers between users. 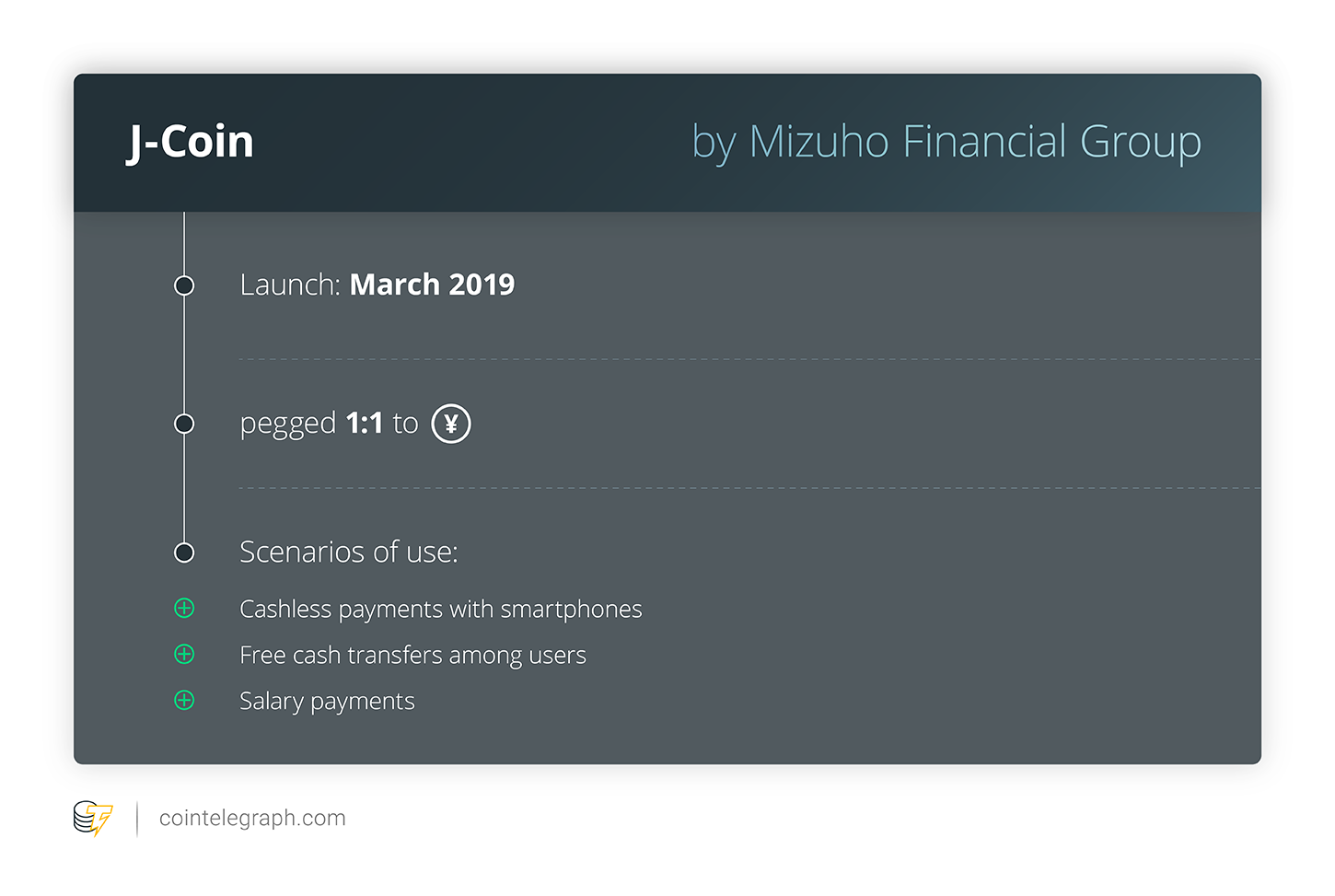 It is part of the J-Coin project, an initiative by the Mizuho Financial Group and Japan Post Bank, which further involves around 60 regional banks.

Under the J-Coin project, the digital currency will be fixed (pegged) 1:1 to the Japanese yen to reduce volatility, and the commission that shops have to pay credit card companies will be kept low.

Mizuho also hopes in the future that the J-Coin could be used for salary payments and also to team up with Alipay, an online payments platform that uses QR codes, to enable foreign visitors to easily make payments in Japan.

With the J-Coin, Mizuho has made it possible for regional banks to utilize a scheme to issue their own branded coins.

According to Mizuho Financial Group President Tatsufumi Sakai, the J-Coin scheme will allow them to take advantage of the data revolution by using the data obtained through the new payment service for its future businesses:

“The business of financial settlements has become more important and is expected to continue to grow. So we have to take a serious approach.”

MUFG is the largest financial company in Japan and the world’s fifth-largest bank, with $2.7 trillion assets under management.

They announced a trial of their own cryptocurrency in May 2018, and by September 2018, they had experimented with the MUFG coin at a convenience store for employees. The MUFG coin will be pegged 1:1 to the Japanese yen and the company aims for it to be applied to a variety of everyday financial needs, such as withdrawals and deposits to transactions and payments. 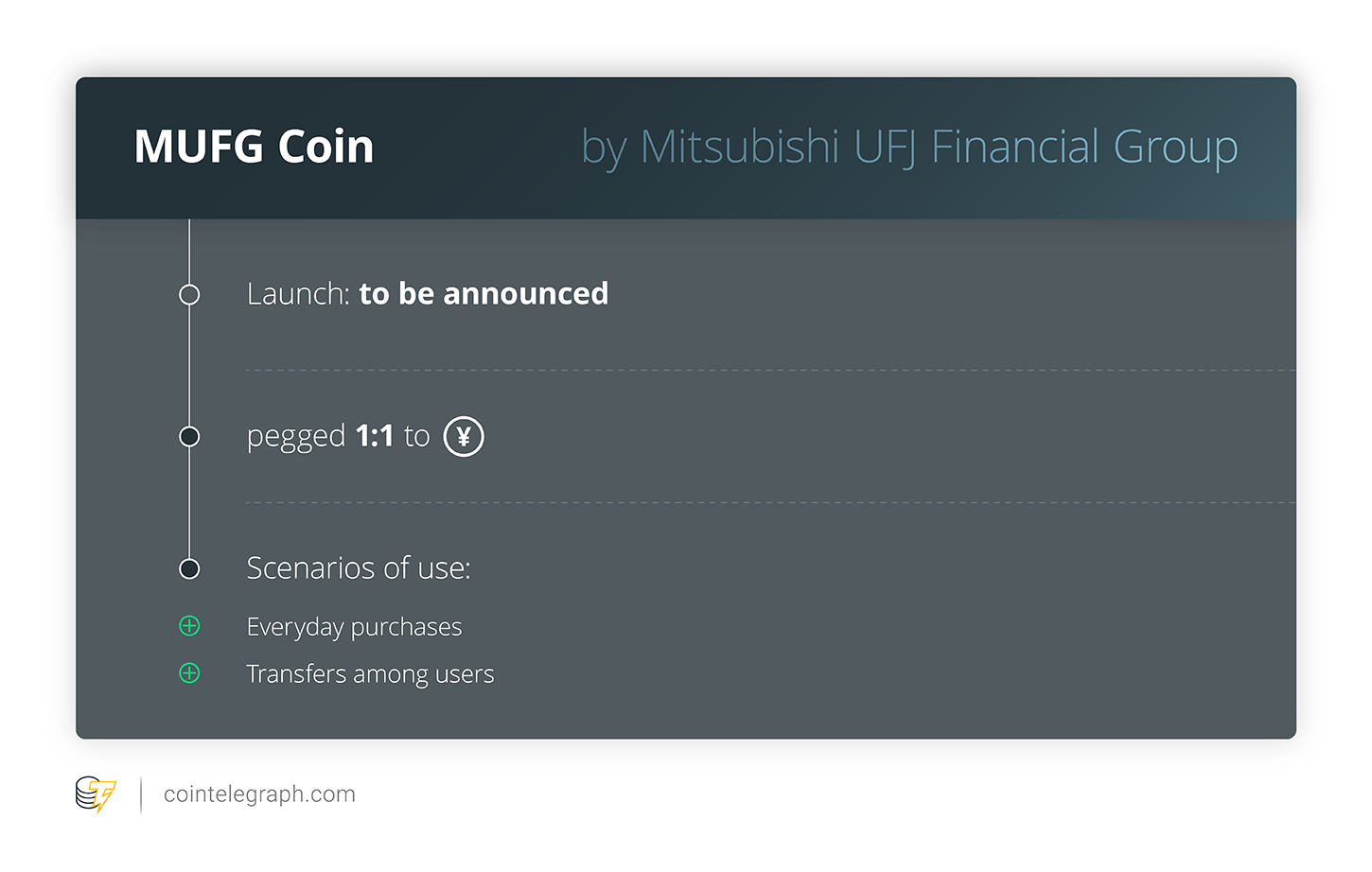 They remain optimistic about the use cases for the MUFG coin:

“Potentially this coin could have large-scale commercial potential, as well as serving small-scale retail bank customers. Other than MUFG Coin, MUFG is testing another untitled digital currency rewards for employees who reduce their overtime hours and practice a healthy lifestyle, which resonates strongly to the work style reform of Abenomics.”

In May 2018, MUFG also completed a cross-border payment pilot test using Thai bank Krungsri’s Blockchain Interledger to send money, in a matter of seconds, from a Thailand-based Mitsubishi Group subsidiary to the Standard Chartered account of a Singapore-based Mitsubishi Group subsidiary, and they announced a partnership with United States-based cloud delivery platform, Akamai Technologies, to release a global payment network based on blockchain.

Japan’s Fisco Ltd., a large financial services and financial information company, issued Bitcoin bonds in August 2017. Although not their own digital currency, they are one of the first organizations in the world to issue this type of crypto-related debt financing instrument.

The bond had a 3 percent annual interest rate and returns Bitcoin when it matures.

Dan Doney, the CEO of Securrency — a financial technology solutions provider that creates interoperability among blockchains and legacy systems with associated Decentralized Investment Banking Services (DIBS) — said that the Bitcoin bond “brings digital currencies into the world of high finance” but that it is very difficult to predict the price of Bitcoin tomorrow, let alone a year from now, and that this is what remains a major challenge.

Japan is not alone when it comes to banks launching digital currencies. The phenomenon has been observed across the globe, with several local and central banks either piloting or considering the issuance of their own digital tokens, including Russia, England, Thailand, Venezuela, Norway, Sweden, the Bahamas and Lithuania, to name a few.

But the application of bank-backed digital currencies becomes particularly interesting in a nation that is largely cash-dependent such as Japan, with the potential it has to persuade people to adopt a nontraditional, less familiar, but ultimately more cost-effective and efficient means of payment.