Libra US Congressional Hearing — Recap Before Zuckerberg Faces the House

Facebook CEO Mark Zuckerberg to testify before the House of Representatives Financial Services Committee regarding Libra for the first time.

Today, Oct. 23, Facebook CEO Mark Zuckerberg will testify before the United States House of Representatives Financial Services Committee regarding Libra — the company’s stablecoin project that has been facing major regulatory backlash since the day it was announced.

While Libra was previously represented in front of the U.S. lawmakers by the head of the coin’s native Calibra crypto wallet, David Marcus, this will be the first time Zuckerberg himself will represent the project in Congress. So, could the Facebook CEO have any tricks up his sleeve, and how beneficial will such a hearing be for Libra? 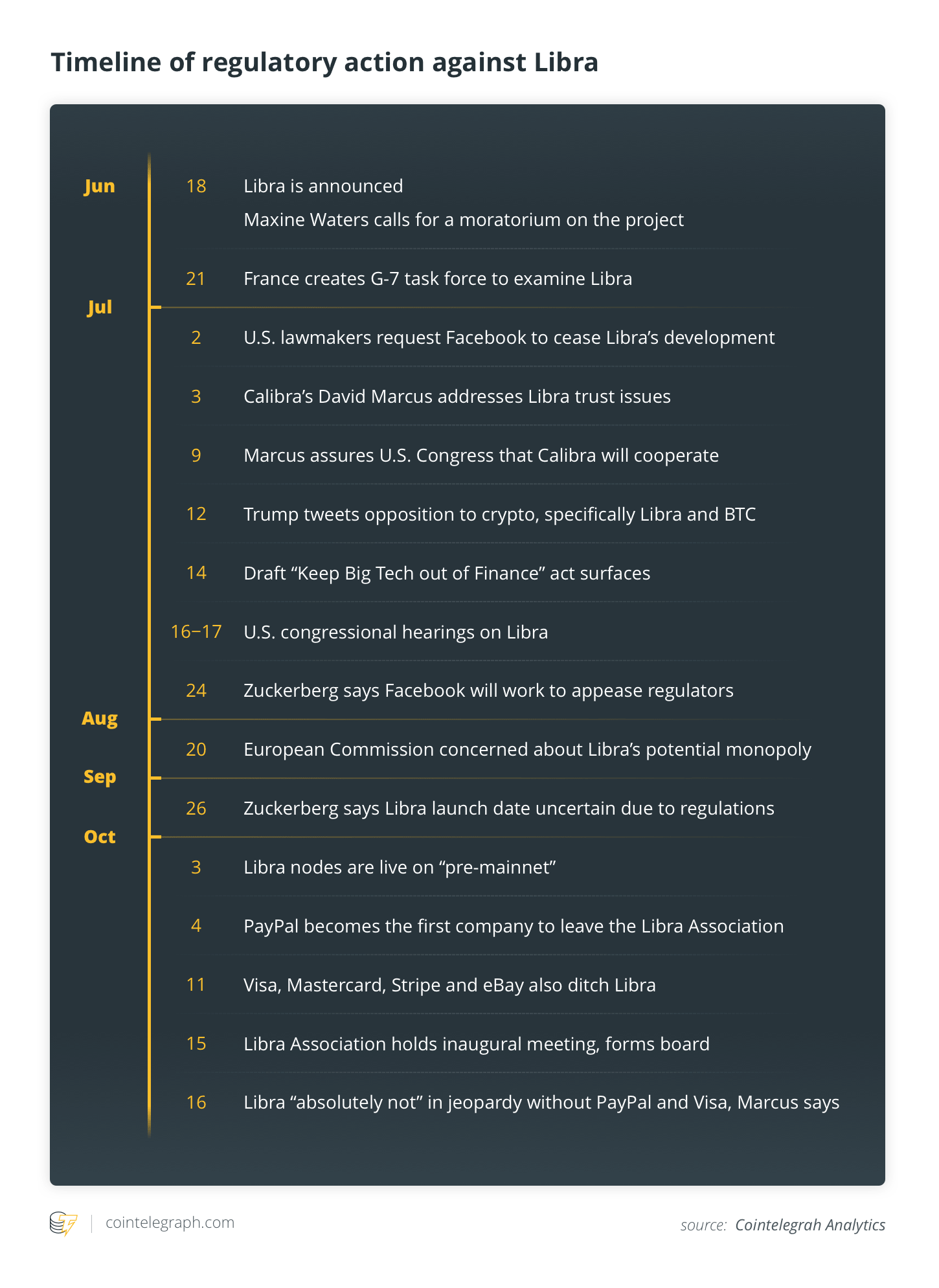 Libra — a stablecoin-like asset that will ostensibly be backed by several national currencies — was officially unveiled on June 18, when Facebook published its white paper. The project has a focus on facilitating cross-border transactions while seeking to target the unbanked population, which accounts for around 1.7 billion adults across the globe.

Specifically, the social media giant is planning to distribute Libra tokens through Calibra — a digital wallet that will be integrated into Messenger and WhatsApp, therefore exposing the cryptocurrency to a multibillion audience. Calibra is being developed by the eponymous Facebook-owned company.

Related: What Is Libra? Breaking Down Facebook’s New Digital Currency

However, the wallet’s CEO, David Marcus, has stated that his product is expected to become just “one of many competing digital wallets available to customers,” given that Libra is an open-source platform.

Further, the project will be governed by the so-called Libra Association — a not-for-profit, Switzerland-based consortium comprised of companies willing to invest a minimum of $10 million each.

The Libra announcement was met with instant regulatory backlash across the globe. On the same day the white paper was released, Rep. Maxine Waters, chair of the House Financial Services Committee, called for Facebook to halt the development “given the company’s troubled past.” Several days later, the governor of France’s central bank revealed that it was forming a G-7 task force to examine how authorities can regulate cryptocurrencies such as Libra.

On July 2, U.S. lawmakers requested a moratorium on the Libra project through a letter addressed to Zuckerberg, Marcus and Facebook’s chief operating officer, Sheryl Sandberg. The committee argued that Libra may lead “to an entirely new global financial system that is based out of Switzerland and intended to rival U.S. monetary policy and the dollar.”

The next day, Marcus penned a blog post addressing criticism surrounding Libra for the first time. The Calibra head emphasized that Libra users will not have to put their trust in Facebook because the social media giant is not the only member of the Libra Network. “Facebook will not control the network, the currency, or the reserve backing it,” he wrote.

Then, on July 9, Marcus wrote a letter addressed to Waters and members of the House Financial Services Committee in preparation for an upcoming Libra hearing, reassuring the lawmakers that Facebook is willing to cooperate, saying: “We are committed to taking the time to do this right.”

Further, a draft bill entitled “Keep Big Tech out of Finance” surfaced online just days before Congress hearings, allegedly deriving from within the U.S. House of Representatives Financial Services Committee in response to Libra. It read:

Soon, two U.S. congressional hearings on Libra took place, as Marcus testified on behalf of Libra before concerned senators. The lawmakers seemed considerably hostile. For instance, during the hearing before the Senate Banking Committee, Sen. Sherrod Brown of Ohio said Facebook is showing “breathtaking arrogance” in its attempt to launch a cryptocurrency, given its involvement in a number of high-profile privacy scandals; and Rep. Brad Sherman, a Democrat from California, called Libra “a godsend to drug dealers and tax evaders,” during a hearing before the House.

In the key takeaway from those meetings, Marcus said the governing body behind Libra has “no plans to engage in banking activities,” and reassured the lawmakers that Facebook would not launch Libra before it has addressed all regulatory concerns. A week later, Zuckerberg finally broke his silence regarding the project during Facebook’s second quarter results conference call. The social media giant’s CEO said that the company will work for as long as it takes to ease regulators’ concerns over the Libra stablecoin.

In August, Libra’s regulatory problems continued, as the European Commission launched a probe into Facebook’s stablecoin to determine whether it is an anticompetitive project. Soon, the Financial Times published a report, arguing that at least three of Libra’s early backers were considering withdrawing their support in light of the intense regulatory pushback.

In late September, Zuckerberg appeared less certain about Libra’s future. In an interview with with Tokyo-based news outlet Nikkei, he sidestepped the question about the stablecoin’s launch, originally scheduled for 2020. “Obviously we want to move forward at some point soon [and] not have this take many years to roll out,” he said. “But right now I’m really focused on making sure that we do this well.”

Still, it seems that Libra has been on track in regard to the technical side of the project. On Oct. 2, the project’s developers released a new roadmap and announced that Libra has launched its pre-mainnet for select partner nodes, who “have already deployed their nodes and have them communicating.”

Nevertheless, the regulatory pushback has taken its toll, considerably damaging the morale of Libra Association members. In early October, previous media reports about disappointed Libra backers prove true, as PayPal became the first company to withdraw from the group. Visa, eBay, Stripe and Mastercard soon followed suit, while Booking Holdings and Mercado Pago have been the latest to ditch the Libra Association.

Most companies limited their statements to saying that although they respect and support Libra’s mission, they have chosen to pursue other goals at this point. Notably, Visa, Mastercard and Stripe left after their CEOs received public letters from U.S. Sens. Brown and Brian Schatz that essentially threatened to enforce more regulatory scrutiny on all the activities of the payments companies if they continued their participation in Libra.

In the accompanying press release, the Libra Association stressed that “over 1,500 entities have indicated interest in joining the Libra project effort, and approximately 180 entities have met the preliminary membership criteria,” suggesting that there are no irreplaceable members. Indeed, on the following day, Marcus confirmed that Libra is “absolutely not” in jeopardy after seven high-profile members left the group.

Now, Zuckerberg is going to face regulators and their questions regarding Libra — which, judging by previous U.S. congressional hearings on the matter, are likely to be blunt, if not provocative. The Facebook CEO will be the sole witness at the hearing, titled, “An Examination of Facebook and Its Impact on the Financial Services and Housing Sectors.”

The House of Representatives Financial Services Committee is predominately anti-Libra.

It is chaired by Waters, one of the most vocal critics of both Libra and Facebook. During the previous hearing on the social media giant’s stablecoin project, she argued that Facebook “allowed malicious Russian state actors to purchase and target ads,” which purportedly influenced the 2016 U.S. presidential elections, while Switzerland — where Libra is headquartered — “has a history of creating a haven for criminals and shady corporations.”

Other Libra opponents on the committee include Sherman, who requested Zuckerberg’s presence at the July hearing because he earlier stated that Libra “is the biggest thing, or it tries to biggest thing, this committee will deal with this decade,” as well as Reps. Ayanna Pressley and Alexandria Ocasio-Cortez, both of whom also grilled Facebook over Libra during the previous session.

Rep. Patrick McHenry, on the other hand, seemed more open-minded, and therefore arguably more supportive of the project. “Washington must go beyond the hype to ensure that we are not the place where innovation goes to die,” he said at the time.

What will be discussed?

Zuckerberg is likely to come prepared, says John Todaro, director of research at TradeBlock, a provider of institutional trading tools for digital currencies. He explained to Cointelegraph that because Zuckerberg has previously testified before lawmakers, he is likely to appear polished and versed, but added, “That being said, if he is backed into a corner, the optics would look bad for Libra.” Todaro went on to share his expectations of the hearing:

“This hearing should be more energetic than the past hearings that David Marcus testified at. [...] I would expect that lawmakers will take aggressive stances against Zuckerberg and Facebook, at least for political gain.”

According to the Hill, the Facebook CEO met with Waters behind closed doors last week ahead of the hearing. Konstantinos Stylianou, assistant professor of competition law and regulation at the University of Leeds, told Cointelegraph that he believes Zuckerberg “waited all this time to see if his involvement would become necessary,” and went on to add:

“Zuckerberg will probably not add anything new that Marcus hasn’t already mentioned, but his testimony is aimed at showing willingness to comply and play with regulators’ rules.”

Chase Cedar, CEO at cryptocurrency consultant firm Koi Research Group, on the other hand, believes that the testimony “will serve as an excellent PR move to drum up more news regarding the project’s features, decentralized aspirations, and development environment.”

However, Cedar does not believe that it will shed any additional light on the project than what is already publicly known, he told Cointelegraph. Moreover, experts seem to agree on Zuckerberg’s potential tactic during the hearing: The Facebook CEO is likely to apply power diffusion, they told Cointelegraph. According to Todaro:

“While Senators will push him to accept responsibility for Libra, which he likely will, I would expect him to also attempt to distance Libra from Facebook. There are many avenues with which he can stress this, including the fact that more than 20 organizations are in the Libra association and that over time the association plans to decentralize the project and corresponding stablecoin even further.”

It is therefore likely that the key point of contention will be the relationship Facebook has with the Libra Association and the degree of control it can exert on it. “FB has a huge power problem, and the last thing it wants is regulators thinking that Libra will also inherit this kind of power,” Stylianou added, “Facebook wants to present Libra as systemically innocuous. Being a monopolist in other markets does not help with that case.”