The number of wallets holding between 1 and 10k bitcoin has seen a sharp increase since the market bottomed this winter.

The number of wallets holding between 1,000 and 10,000 bitcoin (BTC) has seen a sharp increase since the crypto market bottomed this winter, indicating significant accumulation during the price dip. The analysis was published in a new report from weekly crypto outlet Diar on May 28.

Diar’s analysis begins by comparing bitcoin’s distribution landscape today with data from August 2018, when the top coin was last trading in a circa $8,000 price range. The analysis focuses on so-called “Firm Size” bitcoin wallet addresses — defined as those holding between 1,000 and 10,000 BTC — and notes that such addresses now own over 26% of circulating supply, or $36 billion worth of BTC.

Back in August 2018, Firm Size addresses held under 20% of bitcoin’s circulating supply, revealing a significant accumulation of almost 7% in under a year, the report notes.

Since the crypto market’s recent bottom in December 2019 — when bitcoin traded as low as $3,200 — bitcoin accumulation to Firm Size tier wallets has tallied to $450,000 — the most rapid growth among any tier of wallet addresses, as Diar’s data indicates. 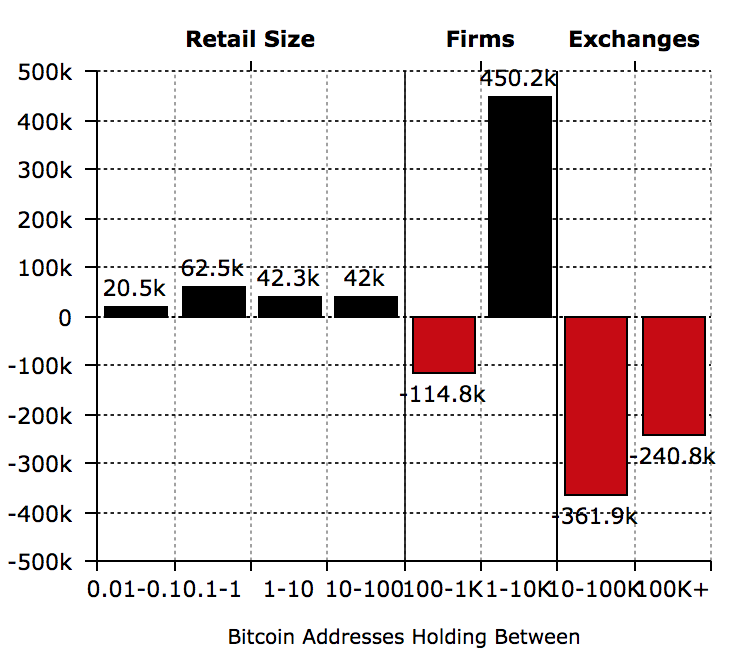 The total value of these Firm Size wallets now totals $6 billion more than in August 2018, with Diar underscoring that the bitcoin analyzed in these addresses is neither stale nor lost — i.e. the majority of it has been actively moved within the past three months.

Diar further notes that since the start of 2019, around 40% of the bitcoin that has been newly minted through inflation has been accumulated by Firm Size wallets — over 100,000 bitcoin.

Even more noteworthy, the report claims, is the long-term trend of apparent accumulation by Firm Size addresses: since the beginning of the crypto bear market in January 2018 — after which around 955,000 BTC has been newly minted through inflation — these addresses have reportedly consolidated half of the new market supply.

As reported, analysts from digital assets fund Adamant Capital predicted this April that the bear market was entering its final phase — accumulation — noting that bitcoin whales were accumulating the top coin in a pattern that echoed the 2014-2015 bear market.