Malaysia Develops Harsh Regulation Alongside With Positives Attitudes Toward Crypto

Malaysia has given cryptocurrencies the regulatory green light — but they have to adhere to securities laws and will be governed as such.

Cryptocurrency exchanges and blockchain-based companies in Malaysia face some testing times following regulatory changes in the country. As of Tuesday, Jan. 15, new regulations governing cryptocurrencies have come into effect in Malaysia.

According to reports, the new regulation has classified cryptocurrencies, tokens and crypto assets as securities, which means they are now under the jurisdiction of the Malaysian Securities Commission.

In accordance with the change, any unauthorized cryptocurrency exchanges or initial coin offering (ICO) could face a 10-year jail sentence and fines to the tune of $2.4 million. 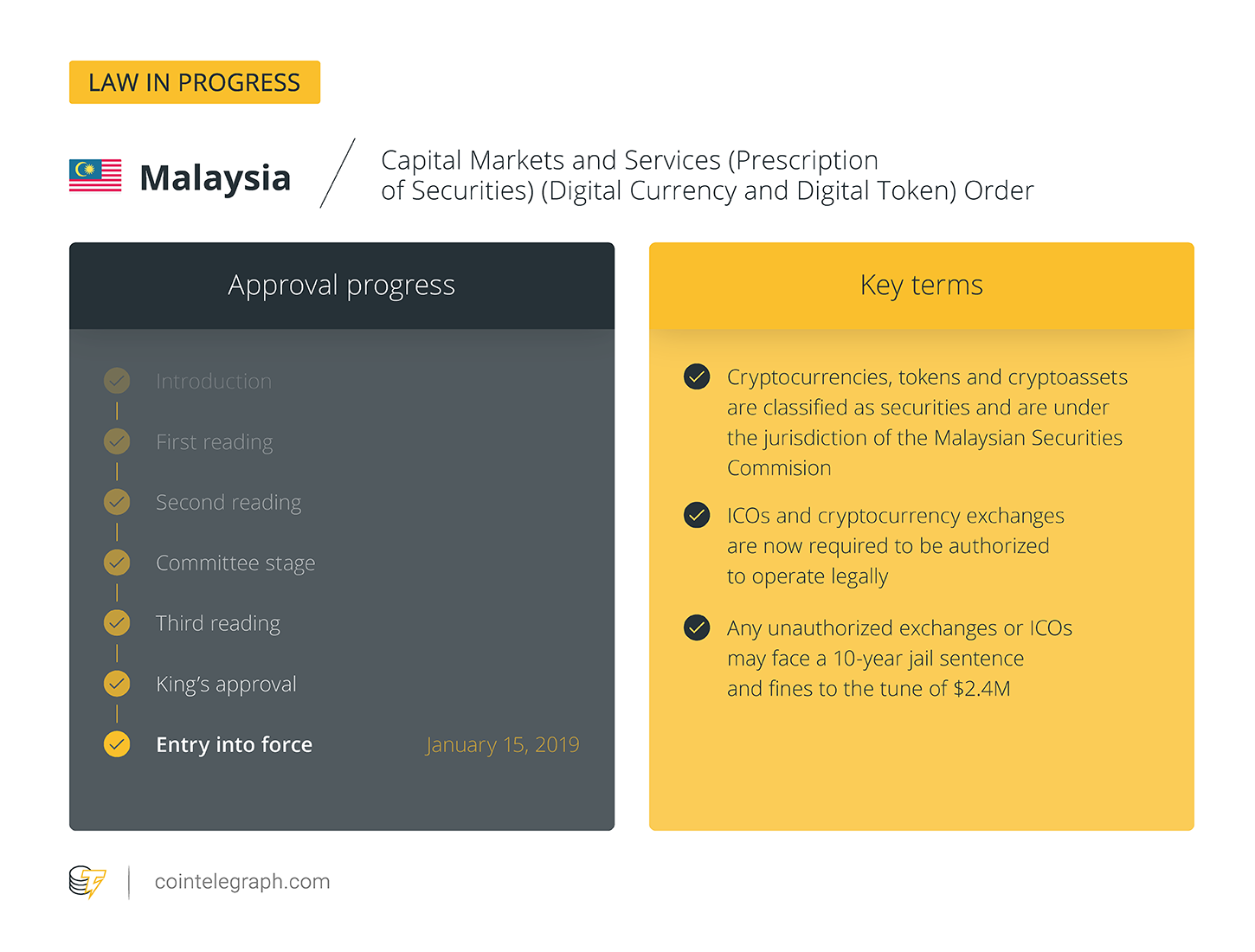 While the change may seem harsh at face value, the punishments for those not adhering to regulations are just the worst-case scenario.

According to various sources, the Malaysian government has expressed positive sentiments toward cryptocurrencies and blockchain technology, even though they’ve taken a hard line in classifying all cryptocurrencies as securities.

Malaysian news outlet The Star noted the positive attitude toward the sector, as Finance Minister Lim Guan Eng delivered the enforcement of the new regulations. According to Eng, the Malaysian government sees the potential of cryptocurrencies and blockchain technology to improve a number of sectors of its economy:

“The Ministry of Finance views digital assets, as well as its underlying blockchain technologies, as having the potential to bring about innovation in both old and new industries. In particular, we believe digital assets have a role to play as an alternative fundraising avenue for entrepreneurs and new businesses, and an alternate asset class for investors.”

This change in sentiment has come swiftly, considering that a Malaysian government minister had said the government was still undecided in its stance on cryptocurrencies last week.

Federal Territories Minister Khalid Abdul Samad made this statement on Jan. 12, according to New Strait Times:

“People have asked me if these (cryptocurrency and digital currency) currencies are legal or illegal. At the moment, the answer is neither legal nor illegal as the situation is still unclear.”

Nevertheless, the final outcome has met the timeline set out by the Malaysian government back in 2018. In December, the finance regulator and central bank had earmarked a final decision on regulation for the first quarter of 2019.

Effendy Zulkifly, who founded Crypto Valley Malaysia, told Cointelegraph that there was already a high level of awareness at a governmental level in the country, with the Central Bank of Malaysia creating a fintech sandbox and setting up a cryptocurrency unit.

Zulkifly believes the move is a positive one for businesses operating in the cryptocurrency space within Malaysia, as it removes any uncertainty around the legality of their operations:

“It is a good thing for the cryptocurrency market because we can [sic] a clear direction and are now recognised by government. There’s no need to be scared and no need to hide anymore. We can just follow the requirements by the government and do an ICO without fear anymore. For example, the Switzerland government is a model that recognised ICOs in their country. Their economy got stronger because the value of ICOs as Foreign Direct Investment.”

While the Malaysian government has been contemplating the direction to take with cryptocurrencies, there’s been plenty of controversy around a local cryptocurrency project linked to a political party.

As previously reported by Cointelegraph, the Harapan Coin came into existence in 2017 and has since been touted as a cryptocurrency used for funding a coalition of opposition political parties leading up to the country’s 2018 elections.

The Barisan Nasional had been in control of the country since its independence in 1957, but finally conceded power in 2018, when the Pakatan Harapan coalition took a majority of seats in the lower parliament.

Overcoming the lengthy stay of power was used as a major fighting point by opposing parties, and the Harapan Coin was directly linked to funding these opposition parties.

There has been some controversy surrounding this particular aspect of the project. The identities of people working on the project are obscure, and more than half of the funds raised has been allocated to system administrators and one of the political parties within the Pakatan coalition.

The Harapan Coin has been promoted by Khalid Samad, the Malaysian Minister of Federal Territories mentioned above. Overall, the project seemed to have been held at arm's length by the Malaysian financial authorities and civil society groups.

The Malaysian government and financial regulator have made a clear-cut decision to define cryptocurrencies as securities. The decision may have some interesting ramifications, but it's a decision that gives clarity to businesses operating in the country.

It is, however, a very different approach compared to a country like the United States, which has taken an extended amount of time to consider how it should regulate cryptocurrencies and virtual assets.

Regulations governing securities have been applied to cryptocurrencies around the world in order to provide some sort of guideline to a technology and medium of exchange that is still in its infancy.

With that being said, the U.S. is looking to move in a different direction from the one taken by Malaysia. In December 2018, two U.S. congressman introduced a draft bill that hopes to exclude digital assets from being defined as securities. 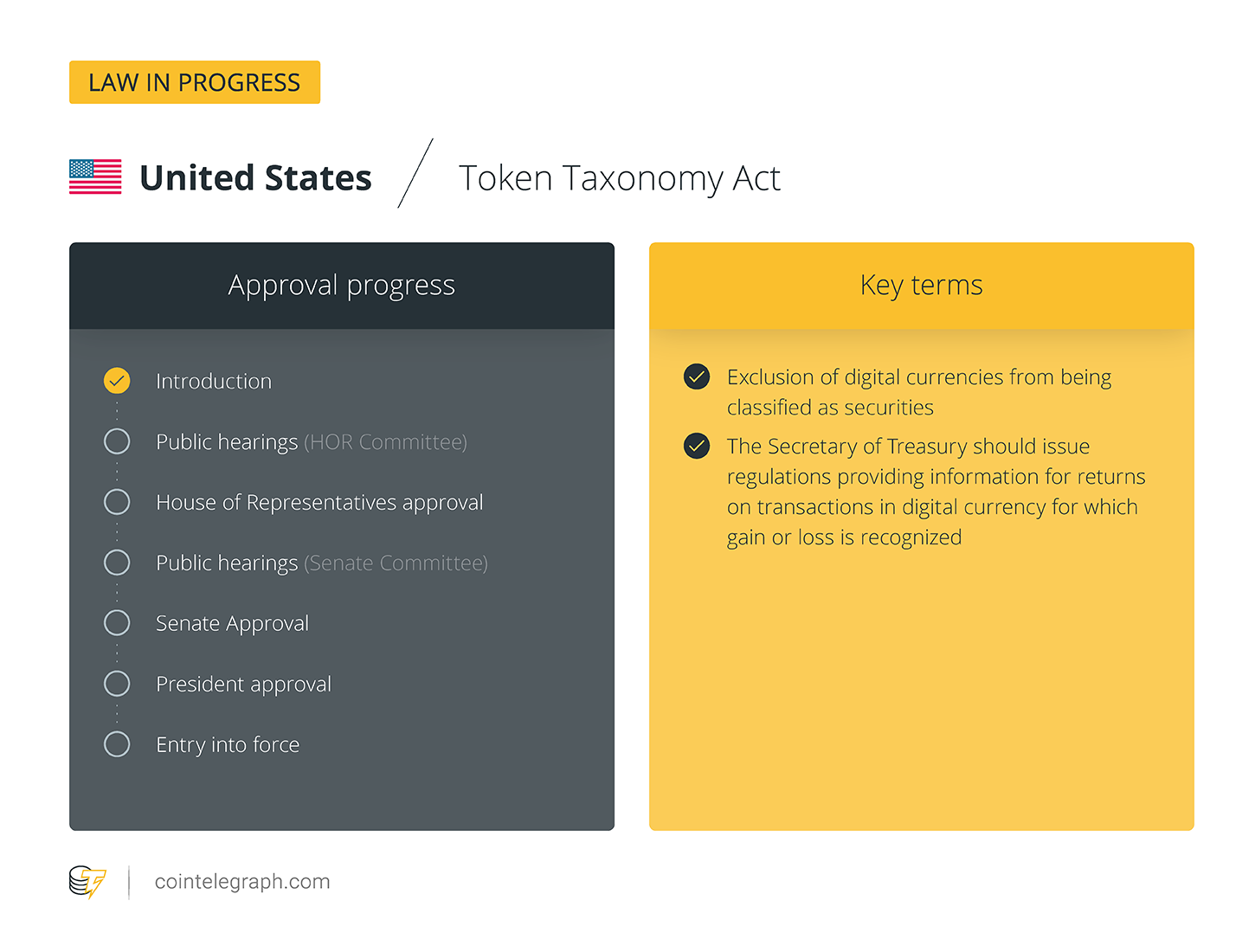 The bill wants the Securities and Exchange Commission (SEC) to adjust taxes related to virtual currencies, create a tax exemption for the exchange of different cryptocurrency tokens, as well as a change to the taxation of capital gains made on the sale and exchange of cryptocurrencies. The proposal essentially wants cryptocurrencies to be considered for what they are, and regulated in a manner that is fair to their use cases.

A prime example was the consideration of Ethereum as security, due to the nature of its token sale in 2014. American regulators looked long and hard at the situation before a final decision was taken to not consider Ethereum as a security in June 2018.

However, the simple truth is that Malaysia’s take effectively throws a blanket over all cryptocurrencies, ICO’s and their tokens.  For now, exchanges and blockchain companies will have to play by the rules or suffer the consequences laid out by Malaysian regulators this week.

While a blanket approach seems to be the route Malaysian regulators have taken, it may not be the best way to approach the situation.

Cointelegraph reached out to Dr. Mattia Rattaggi, the chair of policy and regulation at the Crypto Valley Association, who provided a holistic view of global regulatory trends toward cryptocurrencies:

As Rattaggi suggests, there seems to be no clarity on whether clear distinctions will be made between different types of securities and how cryptocurrencies and crypto assets will be individually classified.

“They seem to take the view that all cryptotokens are securities. But I do not know if they draw distinctions between payment, utility and securities tokens. Thus, in my view only cryptotokens that correspond to securities according the financial law prevailing in the country should be considered and regulated as securities.”

Nevertheless, regulation continues to be a major talking point around cryptocurrencies. Some feel this is a hindrance, but Rattaggi believes it is pertinent to ensure growth and development of the industry:

“I hold the view that the crypto economy is still in a phase where it needs more regulation rather than less. More regulation is needed to increase trust, to standardize more, and more importantly to get to the maturity level of interest to institutional money and investors.”