Bitcoin futures trading reaction, Ethereum hitting new highs and some IOTA for you.

The views and opinions expressed here are solely those of authors/contributors and do not necessarily reflect the views of Cointelegraph.com. Every investment and trading move is risky, you should conduct your own research when making a decision.

In another new milestone, Bitcoin futures trading started on Sunday and it has also turned out to be positive for Bitcoin price.

Futures trading at a premium to the cash market, showed that traders were in a hurry to own a position in the hottest asset class of the year. As a result, Bitcoin hit a new lifetime high yesterday.

The interesting point to note in the past few days has been that the altcoins have also started to make their presence felt.

One such digital currency is IOTA. It has maintained its standing among the top 5 cryptocurrencies based on market capitalization and our readers have been requesting to include it, so, we have added it to our list.

Please note that the pattern targets given in the analysis are a guideline. Many pattern targets are never met. Therefore, traders should always trail their stops higher to protect their paper profits. Please don’t wait to book profits at the designated target levels only, because the charts are dynamic and as they change, so do the targets. 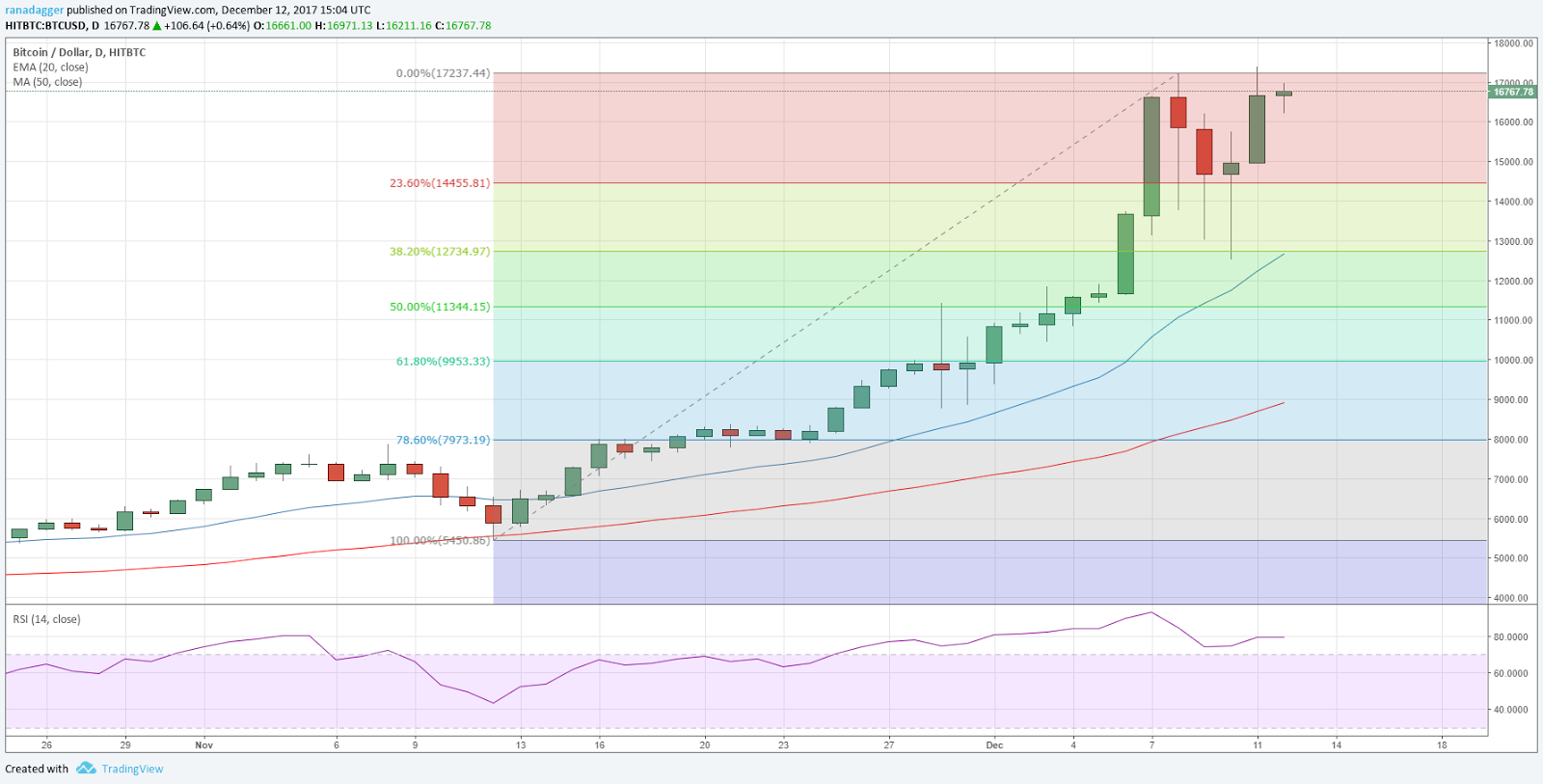 The long wick on Dec. 10, shows enough buying support at lower levels. Since early October the price has closed below the 20-day EMA only once. Therefore, the first sign of bearishness will be when the price movement breaks down below the 20-day EMA. Until then, all dips are likely to be aggressively purchased.

However, it is unlikely to be a straight dash to the above-mentioned target objective. I expect some profit booking at $18,281.68, which is a critical Fibonacci extension level. Above this, $20,000 is likely to act as another roadblock.

For the past six days, Bitcoin’s daily trading range has expanded. I expect a few small range days of trading action, if the price fails to rise and sustain above $17,000.

Initiating fresh long positions can be risky as the logical stop loss position is way lower. I would prefer to wait for a set up to present itself with an attractive risk to reward objective before recommending anything.

I had anticipated a breakout above $480 in my previous analysis and that is what happened. Ethereum broke out to new highs yesterday.

The pattern target of the breakout from the bullish ascending triangle is $652, where I expect a significant resistance. Traders, however, should trail their stops higher to protect their paper profits.

The first signs of weakness will be when Ethereum falls back below $480. Until then, all dips are likely to be purchased. The digital currency was facing resistance at the downtrend line, as drawn in the chart. Currently, Bitcoin Cash is attempting to break out of the downtrend line. Once the price sustains above this for four hours, a move to the upper end of the range is likely.

Another profitable way to trade is to buy on a breakout of the range. Traders can wait for a breakout above $1,758.4 to enter long positions, if price sustains above the level for more than four hours. The breakout from the range is likely to carry Bitcoin Cash to $2,387. Once this level is taken out, a retest of the highs is likely. 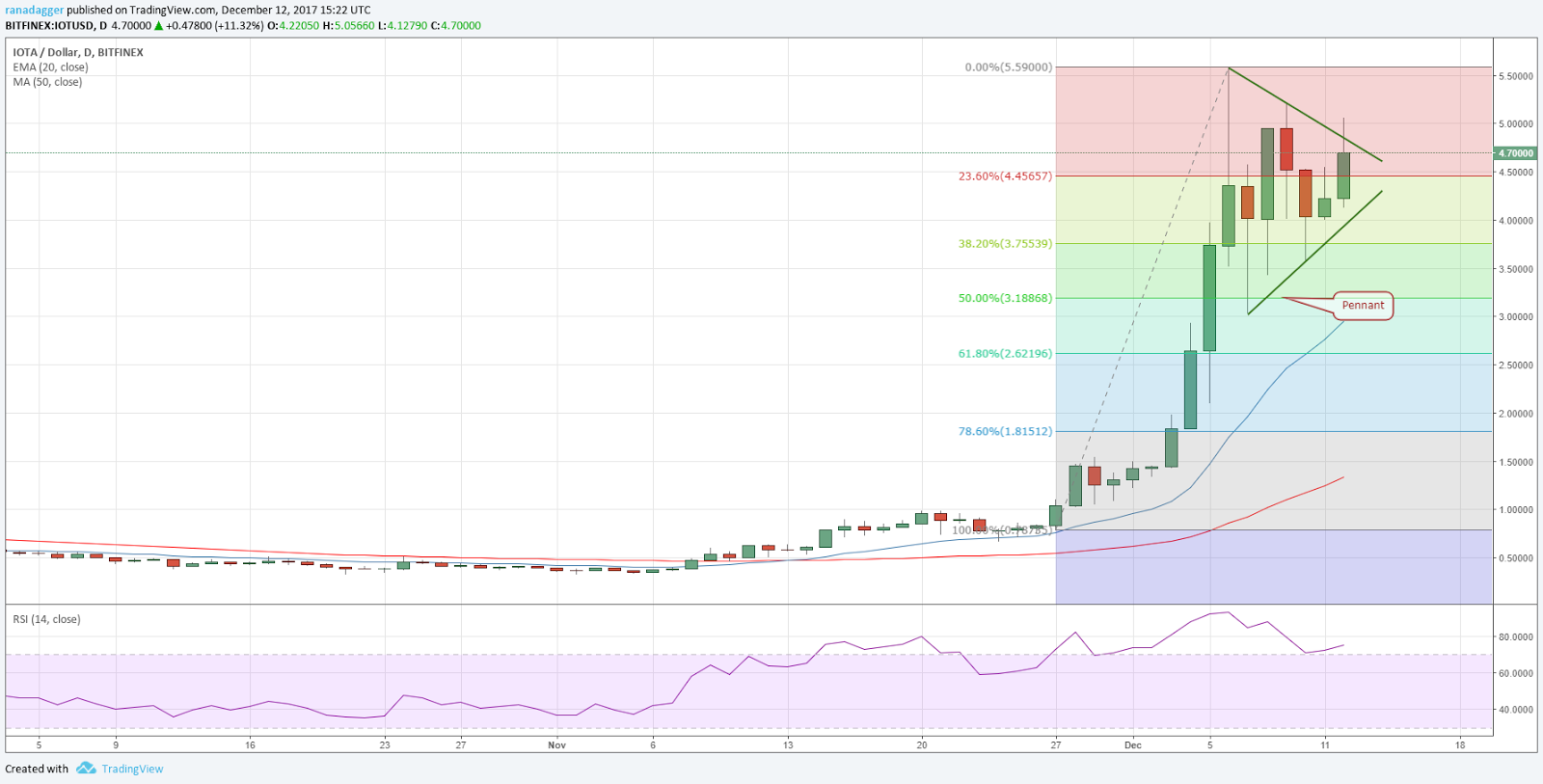 For the past few days the digital currency has been consolidating and has formed a pennant, which is a continuation pattern.

A breakout and close of this pattern is likely to resume the uptrend in IOTA. While $5.59 is likely to act as a resistance, the pattern target is $9.62.

This higher target is invalidated and the cryptocurrency will become negative if it breaks down the pennant pattern.

I expected Litecoin to consolidate after reaching $157 levels before resuming its uptrend. However, the correction lasted only for a day as the digital currency rebounded sharply from $122.193. 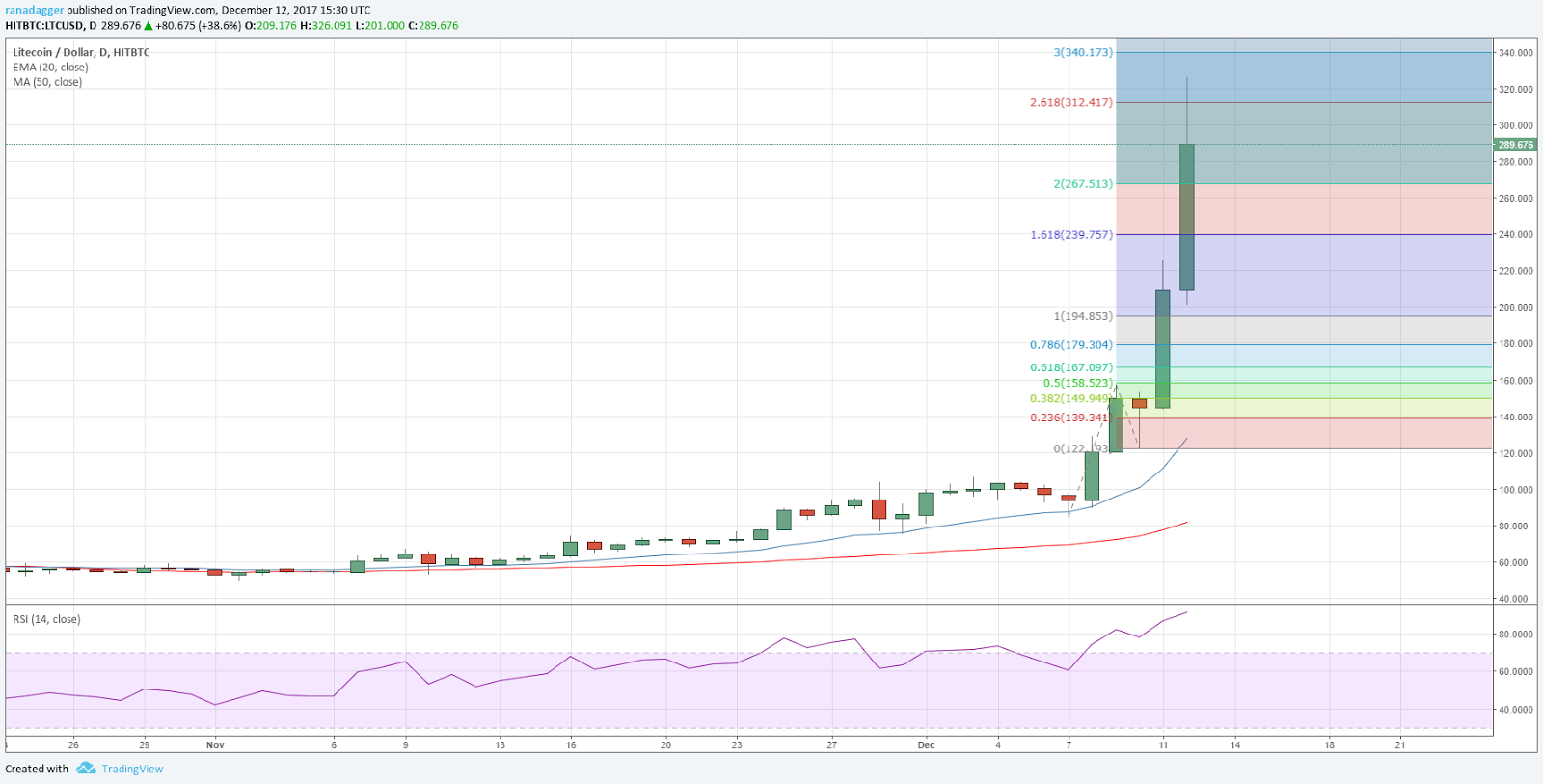 The cryptocurrency has risen 264 percent within five days. I expect it to face significant resistance between $312 and $340.

Another round of profits can be booked between the above-mentioned levels. I anticipate the digital currency to enter into a corrective phase following such a huge rally.

However, when the price is in such a strong momentum it is difficult to pinpoint a particular resistance level, therefore, book profits in batches.

On the downside, all supports are way behind. I can draw the Fibonacci retracement support levels only after the rally stalls, at least in the short-term.

Dash has become range-bound after surging from $266.99 to $815. It has taken support at the $651 levels on two occasions. Therefore, this becomes an important support on the downside. On the upside, $815 is likely to act as a stiff resistance. If the bulls manage to break out and sustain above the lifetime highs, the digital currency is likely to pick up momentum once again.

The next target on the upside is $979 and thereafter $1,199.01. These levels will be invalidated if the bears manage to break down below $651, which can then extend the fall to $540.995, which is the 50 percent Fibonacci retracement level of the rally.