Report: USDC Volume Collapsed in May Despite Market Recovery

As exchange volumes and the crypto market resumes growing by all measures in May 2020, the USDC stablecoin saw its Bitcoin trading volume plummet by 78%.

A June 5 report compiled by CryptoCompare and shared by BitMEX Research shows that a positive trend in cryptocurrency exchange volumes began in 2020, though USD Coin's (USDC) market share plummeted in May.

Volume on “top tier” exchanges, a category that seeks to exclude noise from fake volume exchanges, almost doubled in January, and continued posting growth in the subsequent months.

March saw the highest volume yet in 2020, primarily due to the extreme volatility event of Black Thursday. April saw a sharp decrease, likely spurred by the ongoing uncertainty resulting from the Coronavirus pandemic.

In May, markets resumed growth — both in terms of price and volume, with Bitcoin (BTC) touching the $10,000 mark on multiple occasions. 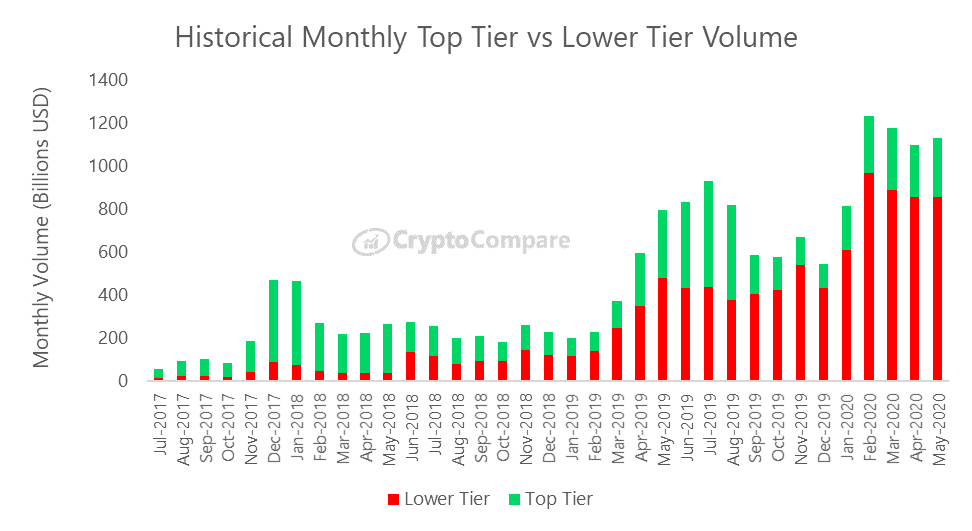 A volume comparison between top tier and lower tier exchanges shows that the latter ostensibly hold the majority of exchange volume, with their figures steadily rising since 2018.

Daily statistics show that their volume tends to follow top tier exchanges quite well, with major liquidity spikes being reflected in both types of exchanges.

While some of that may result from true activity, this could also be due to more sophisticated tactics employed following the May 2019 Bitwise report, which highlighted that fake volume exchanges tended to show much more uniform trading patterns.

While the market as a whole is recovering, USD Coin’s trading volumes with Bitcoin plummeted after hitting a peak in February. 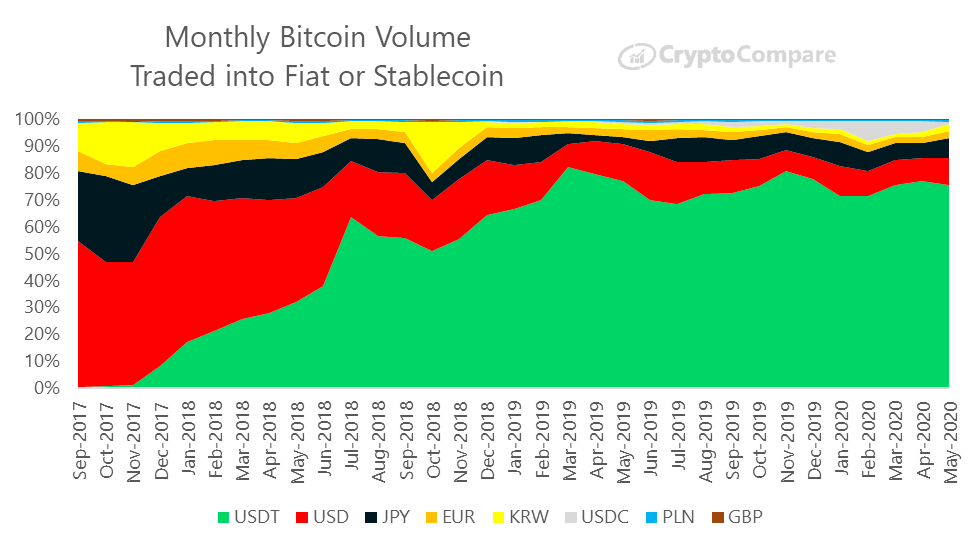 As highlighted by CryptoCompare, both USDC and Paxos (PAX) suffered a spectacular collapse in BTC volume in just a single month:

For Paxos, the loss is partially compensated by its shift toward providing a white-label stablecoin solution, which is employed by, among others, Binance USD.

USDC, the second biggest stablecoin by market capitalization, is a joint project of Coinbase and Circle.

While it is one of the most used stablecoins in Ethereum decentralized finance, data from CoinMarketCap shows that most of its volume still comes from Bitcoin trading pairs.

This market share loss could help explain the recent slashing of USDC Rewards interest on Coinbase, from 1.25% to 0.15%. While Coinbase did not explain the reason behind this 88% drop, it is possible that the exchange wanted to stimulate its holders to trade the coin, or alternatively, that plummeting volume made the reward scheme unsustainable.