Data from CB Insights suggests this year’s total for the space will be $1.6 billion, compared to $4.1 billion in 2018.

Blockchain investment could drop by as much as 60% this year as attention continues to focus on Bitcoin (BTC), new data suggests.

According to a report from fintech research bureau, CB Insights, reported by Bloomberg on July 18, companies in the blockchain space are drawing in a lot less support in 2019.

To date, 227 investment deals have netted the space $784 million in funding. By December, should that momentum continue, the figure will total $1.6 billion.

By contrast, in 2018, companies received $4.1 billion, meaning this year’s number may represent a 61% reduction.

“It took a little bit for the enthusiasm to wear off,” CB Insights’ CEO, Nicholas Pappageorge, commented to Bloomberg about the state of the blockchain investment market.

The data further revealed that for the five years to July 2019, 40% of blockchain investment focused on the United States. China was the second-biggest single country, with 15% of the total. 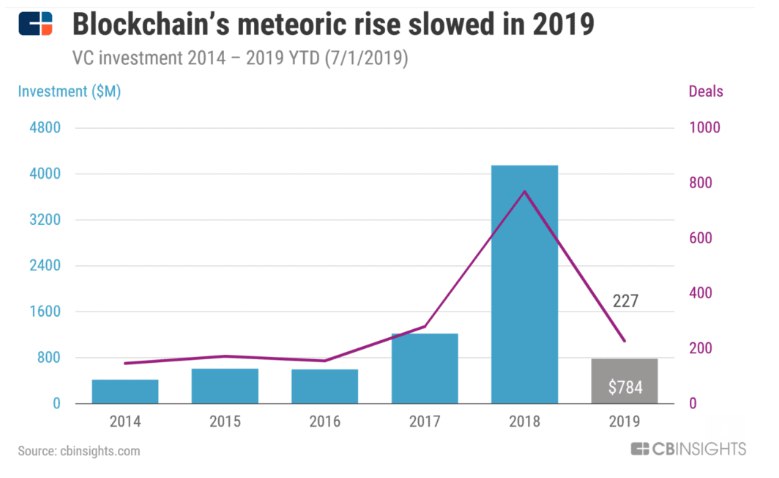 Another aspect, this time highlighted by Reuters, showed that even project which had gained funding, for example those spearheaded by banks, had less than optimal success rates.

Out of 33 such projects, only 12 had made significant progress since their inception. Overall, these are “bad signs for the blockchains not Bitcoin crowd,” according to NY Times reporter Nathaniel Popper.

For Bloomberg, the results constitute a definitive shift in investor interest away from blockchain and towards Bitcoin itself as a source of returns for smart money.

As Cointelegraph reported, the largest cryptocurrency has all but regained its losses from the 2018 bear market, while analysts nonetheless remain split about its next move.