SEC and CFTC Hearing: More Legitimate ICOs or “If There Was No Bitcoin, There Would Be No Blockchain”

This is what happened during the SEC and CFTC meeting.

The Commodity Futures Trading Commision (CFTC) and US Securities and Exchange Commision (SEC) met the morning of February 6 2018 to discuss their roles in Blockchain, virtual currencies, and ICOs. Set in Washington D.C. at the Dirksen Senate Building, the Committee on Banking, Housing, and Urban Affairs met in open session for about 2 hours. Before the hearing began, testimonies were released on behalf of both witnesses.

(these testimonies were released on February 5 2018)

J. Christopher Giancarlo, chairman and witness of the CFTC, expressed optimism in his testimony towards Blockchain/DLT, dedicating a page and a half (VI. Potential Benefits) to the numerous ways financial institutions, charities, social services, agriculture, and logistics can all benefit from it. Giancarlo seemed very bullish on allowing more freedoms for DLT, even comparing it to the internet:

“This simple approach is well-recognized as the enlightened regulatory underpinning of the Internet that brought about such profound changes to human society. During the almost 20 years of “do no harm” regulation, a massive amount of investment was made in the Internet’s infrastructure. It yielded a rapid expansion in access that supported swift deployment and mass adoption of Internet-based technologies. Internet-based innovations have revolutionized nearly every aspect of American life, from telecommunications to commerce, transportation and research and development. [“Do] no harm” was unquestionably the right approach to development of the Internet. Similarly, I believe that “do no harm” is the right overarching approach for distributed ledger technology. “

Despite his optimism, the chairman still stated that digital currencies will “likely require more attentive regulatory oversight” in regards to “fraud and manipulation.” But in his conclusion, he addressed that the SEC and CFTC should do their best to leave room for growth:

“As we saw with the development of the Internet, we cannot put the technology genie back in the bottle. Virtual currencies mark a paradigm shift in how we think about payments, traditional financial processes, and engaging in economic activity. Ignoring these developments will not make them go away, nor is it a responsible regulatory response.”

Jay Clayton, the chairman of the SEC, was a little less excited about virtual currencies - but he also wasn’t denying their role in a modern financial ecosystem.

“To be clear, I am very optimistic that developments in financial technology will help facilitate capital formation, providing promising investment opportunities for institutional and Main Street investors alike. From a financial regulatory perspective, these developments may enable us to better monitor transactions, holdings and obligations (including credit exposures) and other activities and characteristics of our markets, thereby facilitating our regulatory mission, including, importantly, investor protection.”

But he also admitted that there still lay many traps:

“At the same time, regardless of the promise of this technology, those who invest their hard-earned money in opportunities that fall within the scope of the federal securities laws deserve the full protections afforded under those laws. This ever-present need comes into focus when enthusiasm for obtaining a profitable piece of a new technology “before it’s too late” is strong and broad. Fraudsters and other bad actors prey on this enthusiasm.” 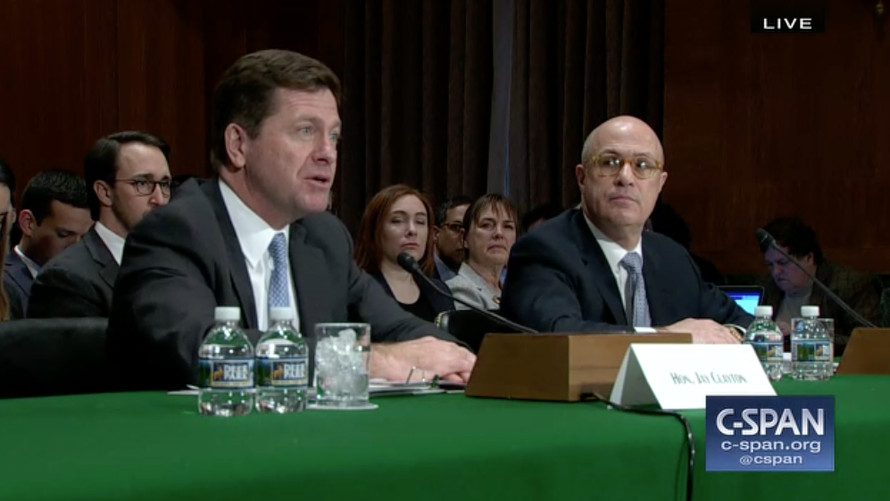 While Giancarlo mentions the word “ICO” once in his testimony, Clayton mentions it 132 times.

A recent study has found that 10% of all ICO proceeds have been lost to hacks and fraud, and Clayton’s fear is that many uneducated investors are losing lots of money. He even went on to promote Facebook’s recent ICO advertising ban:

“I do want to recognize that recently social media platforms have restricted the ability of users to promote ICOs and cryptocurrencies on their platforms. I appreciate the responsible step.”

Clayton goes on to praise the innovations of DLT (Distributed Ledger Technology), better known as “Blockchain”, but hopeful to create some boundaries for ICOs.

“Simply said, we should embrace the pursuit of technological advancement, as well as new and innovative techniques for capital raising, but not at the expense of the principles undermining our well-founded and proven approach to protecting investors and markets.”

Clayton has mentioned that he and Giancarlo have “built a strong relationship.” They are willing to work together to come up with a robust regulatory framework. In the simplest of terms, there seems to be a gradient that starts at ICOs, to virtual currencies, and then to DLT. DLT needs the least regulation, and in fact both the SEC and CTFC seem to encourage anyone willing to expand on it. ICOs are on the other side, requiring the most regulation, and virtual currencies are in the middle, needing protection against fraud and market manipulation.

Today’s hearing was refreshing in the sense that both Chairman Giancarlo and Chairman Clayton remained excited about the potential of decentralized technology and cryptocurrencies throughout the hearing.

Clayton broke it down into 3 categories: DLT (distributed ledger technology), cryptocurrencies, and ICOs. As stated in the pre-testimonies, the CTFC was interested in allowing growth for DLT and cryptocurrencies, while keeping a watchful eye on fraudsters in ICOs.

Giancarlo was very bullish in his sentiments towards cryptocurrency. In his opening statement he said that “we owe it to this generation to respect this generation's interest in cryptocurrencies, and punish those who persecute.” He talked about how interested his children were in the Bitcoin world and it was exciting to see them so interested in finance.

CFTC Chairman Giancarlo opens with a story of his 3 college-aged kids who are enthusiastic about #Crypto as most #millenials are. He advocated that we embrace #CryptoCurrency. Great stuff! We can thank his kids for that one. #PayWithLitecoin

He also mentioned Lab CFC: the CFTC’s organization to educate Main Street on cryptocurrencies. Giancarlo stressed that education was the most important route to take when overseeing cryptocurrencies; the CFTC has never conducted as much educational outreach as they have in this area.

Senator Crapo mentioned that neither agencies have complete jurisdiction over cryptocurrencies and ICOs. Giancarlo and Clayton both agreed that they “may need additional authorities to regulate,” but before they can agree to that they must learn more about the crypto space. Clayton also briefly touched on the issue that the SEC does not have enough money to hire more people.

When Senator Cotton asked Giancarlo about the value of Bitcoin, Giancarlo replied with “If there was no Bitcoin, there would be no DLT.” Both Clayton and Giancarlo know that cryptocurrencies are important for the development of DLT, and want to see the technology grow without getting anyone hurt in the process. Giancarlo also said that Bitcoin’s floor could not be zero. This is because Bitcoin’s value is “tied to mining.”

There wasn’t much talk at all about tax regulation. Clayton and Giancarlo also admitted that they have no jurisdiction over nation states, such as Venezuela, using cryptocurrencies to avoid sanctions.

Clayton did mention that while ETFs in Bitcoin are currently not ready, but that “there will be room in the future.”

Lastly, Senator Warren asked Clayton how they can make ICOs safer. Clayton responded that many ICOs are, in fact, violating existing laws and that ICOs “should pay more attention” because the SEC is going to be investigating these violations further.

The best solution, according to both Giancarlo and Clayton, would be to:

In summary, cryptocurrencies will allow growth for the United States the same way that the internet did. The United States should be a leader in this aspect, and make sure that nobody gets hurt in the process. Crypto HODL’ers alike all agree that the news was very bullish.

On a side note, Giancarlo thinks “HODL” is an acronym for “Hold On for Dear Life.”

Did Giancarlo just say HODL to a group of senators