The S&P 500 sees a TD9 sell signal confirmed on multiple time frames but traders remain optimistic about the price of Bitcoin.

The TD9 sell indicator emerged on the S&P 500 chart across various time frames. Considering the heightened level of correlation between Bitcoin and stocks, it might hint at a short-term Bitcoin (BTC) price pullback.

But cryptocurrency traders seemingly remain unfazed by the vulnerability of stocks. Several traders anticipate Bitcoin to rally toward the mid-$9,000s despite the TD9 signaling for a correction.

What is the TD9 system, and why could it hint at a BTC pullback?

A TD9 sell signal is an indicator part of the widely-cited TD Sequential system. It spots a potential trend reversal by identifying overextended corrections or rallies.

A TD9 buy or sell signal appears when nine consecutive candles are higher than the four candles prior. As an example, let’s assume the price of Bitcoin opened at $10,000 on a daily chart at the start of a month. If BTC closes above $10,000 for the next 13 days, a TD9 sell signal would confirm.

Typically, a 13-day rally with barely any pullback leads to the confirmation of a TD9 sell signal across many time frames. This week, a pseudonymous trader known as Fomocap said that the signal emerged on the daily, 12-hour and 6-hour S&P 500 charts. The trader said: 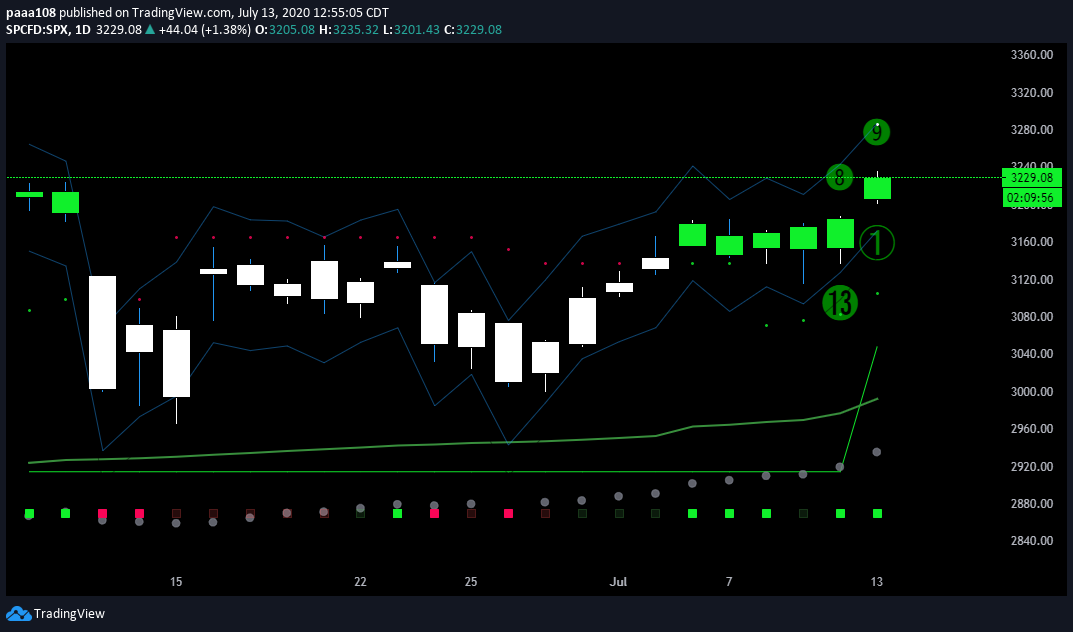 Data from Skew meanwhile shows that the price of Bitcoin has demonstrated a relatively high level of correlation with stocks since March. As such, if the stock market falls in the near-term, it could affect the sentiment around Bitcoin.

However, the trader emphasized that the accuracy of the TD9 signal is debated because it can give false signals. In a bull market, for instance, the price of Bitcoin or U.S. stocks can continuously see uptrends without major pullbacks. In that case, the TD Sequential system could become less effective. The trader said:

“It’s one of many PA patterns. Yes, basically momentum. TD9 gives lots of false signals too. Better to collect all data, angles, views then stuck in own imagination paradigm. Just to keep on radar, no blindly following.”

At the same time, according to market analyst Michael van de Poppe, the uptrend of Bitcoin remains intact due to resilience at a strong support area.

Bitcoin has remained above $9,200 for the majority of the past two months. BTC saw brief drops below $9,000, but the top cryptocurrency recovered quickly.

Bitcoin trader Zoran Kole also suggested that the chances of the Bitcoin uptrend continuing to the mid-$9,000s remain high.