In December 2017, the firm rebranded itself to focus on blockchain development and enjoyed a 289 percent boost in its stock. Since then, it has been delisted from Nasdaq, hit with a subpoena by the Securities and Exchange Commission (SEC), made (and then cancelled) mining-related plans, and limited its blockchain endeavors to one minor investment.

According to its LinkedIn page, the firm has achieved solid distribution growth in the Northeast region of the United States “with plans for aggressive expansion nationwide.” In July 2016, Long Island Iced Tea Corp’s shares began trading on the Nasdaq Capital Market (one of three tiers of the Nasdaq Stock Market related specifically to small-capitalization companies) under the ticker LTEA, as the tea maker had raised $6.9 million in a stock offering. Prior to that, the company’s stock had been trading over-the-counter (OTC).

Despite getting listed on Nasdaq, the soft drinks company was off to a rough start. First, according to Newsday, its earlier filings with the SEC showed that Long Island Iced Tea Corp. planned to collect more than $10 million from the stock offering, while it had only received $6.9 million. Further, LTEA shares reportedly fell 13 percent to close at $5.95 on the first trading day. The company’s CEO, Philip Thomas, explained that the decline in stock price had been expected, as LTEA shares were being sold for $5.50 on OTC markets.

“You can expect that would put some downward pressure on it,” he told Newsday at the time.

Further, in October 2017, Long Island Iced Tea Corp. received its first delisting warning from Nasdaq, as per the firm’s report submitted to the SEC. Nasdaq’s complaint was that the tea maker’s market value stayed below $35 million for 30 straight working days, violating Nasdaq Listing Rule 5550(b). The stock exchange had given the company until April 2018 to fix the situation.

Blockchain frenzy: skyrocketing stocks and the power of hype

In December 2017, the company found a solution that would allow it to remain Nasdaq-listed. After capitalizing on the ongoing crypto euphoria and rebranding itself as Long Blockchain Corp., the company saw its shares skyrocket by 289 percent. As Techcrunch noted, as of Dec. 20, the firm had a market value of just $23.8 million — but, at one point in premarket trading, had 9.76 million outstanding shares, giving Long Blockchain Corp. a market value of close to $138 million.

Thus, according to the company’s new plan, it was going to continue selling nonalcoholic beverages through a subsidiary called Long Island Brand Beverages, LLC, but also work toward "the exploration of and investment in opportunities that leverage the benefits of blockchain technology."

The move wasn’t particularly innovative, and the firm was not the only one seeing its shares soar due to blockchain-oriented rebranding. As the Guardian pointed out at the time, Long Island Iced Tea was “not even the first soft drinks company to also do so,” adding that
a firm formerly known as SkyPeople Fruit Juice jumped by more than 200 percent after changing its name to Future FinTech and making pro-Bitcoin (BTC) statements. Other companies achieved similar results as early as in October 2017, when, for instance, a British investment firm, On-line Plc, added the word “blockchain” to its name and saw a 394 percent increase of its shares. 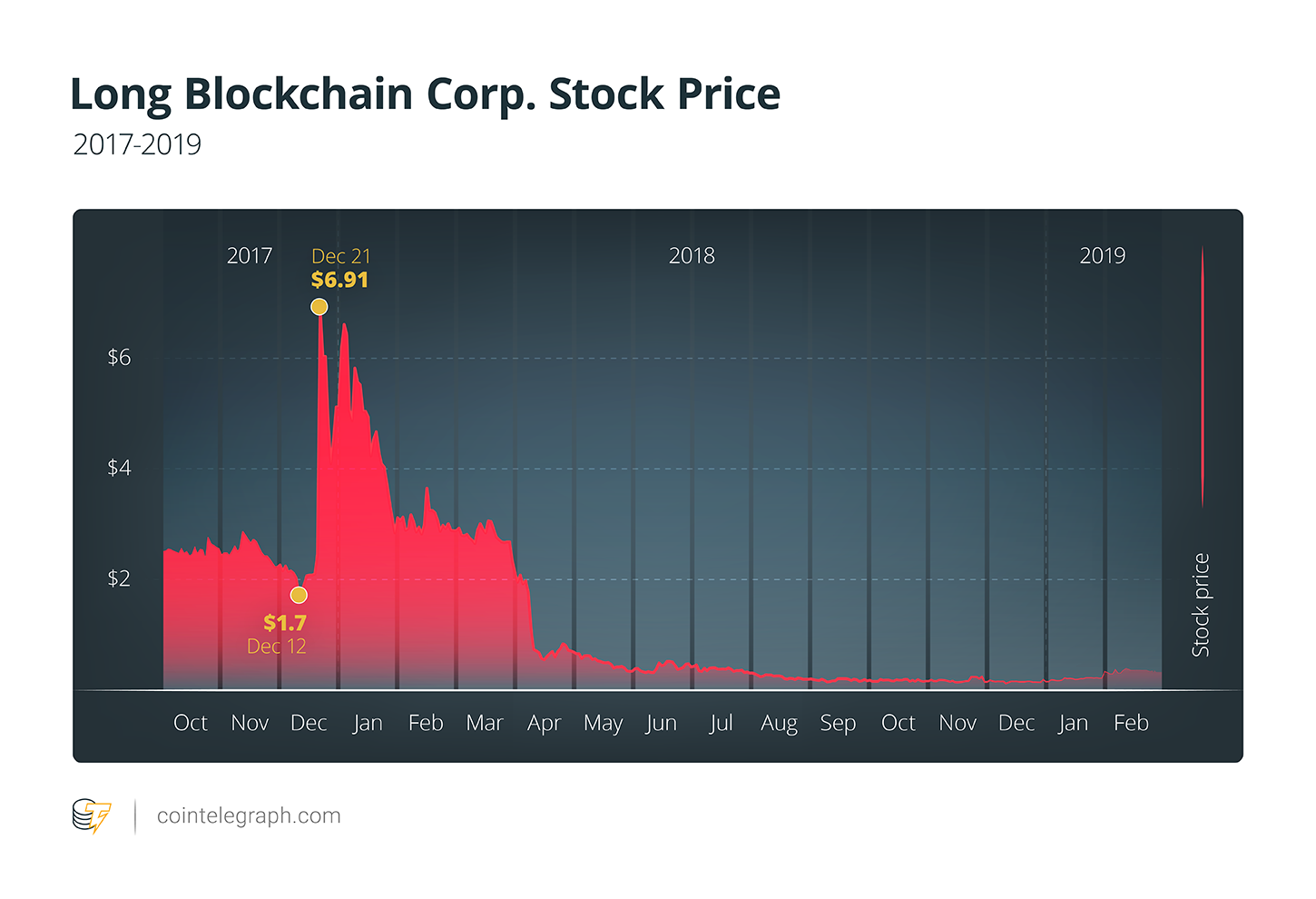 In January 2018, SEC Chairman Jay Clayton addressed the growing phenomenon of companies adding the word “blockchain” to their names, warning that they could soon face increased scrutiny from regulators:

“I doubt anyone in this audience thinks it would be acceptable for a public company with no meaningful track record in pursuing the commercialization of distributed ledger or blockchain technology to (1) start to dabble in blockchain activities, (2) change its name to something like "Blockchain-R-Us," and (3) immediately offer securities, without providing adequate disclosure to Main Street investors about those changes and the risks involved.”

Nevertheless, Long Blockchain Corp. CEO Philip Thomas insisted that his company was serious about the technology. He said:

“We view advances in blockchain technology as a once-in-a-generation opportunity, and have made the decision to pivot our business strategy in order to pursue opportunities in this evolving industry. [...] We will, in the coming weeks and months, be taking a series of steps related to our efforts to assemble a world-class team of industry professionals to help us realize this vision.”

Long Blockchain had a lot of blockchain-related plans, but none of them went through

According to reports at the time, as part of its shift in focus, the company was considering a number of investments and acquisitions, including an unspecified software developer who worked with blockchain within financial services industry, a London-based provider of foreign exchange services who was allegedly developing “multiple blockchain and digital cryptocurrency technology solutions for the financial markets,” and a smart contract platform for creating decentralized applications (DApps). It also asked Nasdaq to change its ticker to LBCC, which the stock exchange operator eventually did.

On Jan. 4, 2018, Long Blockchain Corp. revealed its plans to purchase 1,000 Antminer S9 mining rigs for $4,2 million, which were to be shipped to “a secure data centre in the Nordic region to immediately commence mining operations.”

“We view this transaction as an important and validating initial step in the company’s progression into blockchain technology,” Thomas said.

“The commencement of our mining operations places us on a path to generating blockchain-related revenue through the accumulation of bitcoin.”

Soon after, on Jan. 16, Long Blockchain Corp. announced its intent to form a wholly owned subsidiary that would merge with a United Kingdom-based tech company Stater Blockchain, which was developing “globally scalable blockchain technology solutions in the financial markets.” Thomas described the plan as a “potential milestone.”

However, soon the beverage-firm-turned-blockchain-enterprise’s plans started to tumble. First, on Feb. 2, Long Blockchain Corp. stated it would not buy the mining rigs after all.

“After thoughtful consideration and in consultation with outside technology advisors, the Company will instead focus its efforts on seeking to enter into and ultimately consummate its previously announced proposed merger with Stater Blockchain Limited,” Thomas explained in a press release.

Further, the Stater deal fell through as well — although, to an extent: After nearly two months of negotiations, Long Blockchain Corp. made a minor investment by purchasing a 9.9 percent share of Stater Blockchain, but never fully acquired the U.K. firm.

“As the expiration date of the letter of intent approached, both parties agreed that a minority investment with dual board representation would allow us to immediately formalize our partnership while maintaining our respective autonomy,” said Shamyl Malik, who became the new CEO of Long Blockchain after Thomas “terminated his employment agreement” with the company for “good reason.”

By that time, Long Blockchain Corp.’s market value had fallen below $30 million, and Nasdaq had accused the company of misleading investors. On Feb. 15, the former iced tea maker received a letter from the exchange’s operator, who “believed that the company made a series of public statements designed to mislead investors and to take advantage of general investor interest in Bitcoin and blockchain technology, thereby raising concerns about the company’s suitability for exchange listing,” as per the Long Blockchain Corp. filing with the SEC.

In the same filing, Long Blockchain Corp. said it “strongly disagrees” with Nasdaq’s decision. It has filed an appeal, meaning it could continue trading on the market until a hearing takes place.

On March 22, the Nasdaq Hearings Panel ruled against Long Blockchain. Its shares were suspended from the Nasdaq Capital Market starting on April 12. After the delisting, the firm remained a public company with its shares trading publicly, following all required filings and regulations:

“LBCC will remain a public company following the delisting and its shares will continue to trade publicly. [...] The Company will continue to maintain an independent Board of Directors with an independent Audit Committee and provide annual financial statements audited by a Public Company Accounting Oversight Board (PCAOB) auditor and unaudited interim financial reports, prepared in accordance with U.S. generally accepted accounting principles (GAAP).”

Long Blockchain might still enter the technology field at last, but the chances are slim

Hence, Long Blockchain Corp. was back on the OTC market. Nevertheless, the company had not given up on its goal of becoming a leader in blockchain. A week prior to being delisted, it announced that it had entered into a definitive agreement to acquire Hashcove, a U.K.-based technology startup developing blockchain products and applications, in exchange for LBCC common stock. Curiously, Stater Blockchain was supposed to obtain Hashcove in January 2018.

Then, the once-beverage company underwent yet another rebranding. On Aug. 31, Long Blockchain formed a new subsidiary called Stran Loyalty Group to focus on loyalty, incentive, reward and gift cards for corporate brands.

In a statement, Andy Shape — who now replaced Malik as the new CEO — confirmed that his company had not, in fact, offered any blockchain-related services to date:

“At this time [...] the company has not taken any steps toward developing any such technology and does not employ personnel with the relevant technology expertise.”

At the time, the company’s worth was less than $5 million.

The next day, Bloomberg reported that the SEC had slapped Long Blockchain with a subpoena. In a comment, the company reportedly said that the subpoena, originally dated July 10, requested certain documents from Long Blockchain Corp. The firm declined to provide further details, saying:

In September 2018, Long Blockchain terminated its agreement with Hashcove, meaning its only remaining blockchain-related deal was cancelled.

Now, the company has reached an agreement to sell its ready-to-drink tea business to Canadian investment firm ECC Ventures 2 Corp. The deal is documented in a SEC filing dated March 6.

According to a Newsday report, the company would get 500,000 Canadian dollars (equivalent to over $372,000) and 9.2 million shares of ECC Ventures 2 Corp after that company completes a share consolidation. Shares of the newly established Canadian company are expected to trade on a tier of the Toronto Stock Exchange, replacing ECC's listing.

The Long Island Iced Tea’s social media accounts have been inactive since December 2017.

It might be an attempt for the company to go full-blockchain yet again, as in December 2018, Long Blockchain executed an agreement for a joint venture with EHCo LLC, a holding company and the parent of Entrex Capital Market, “to scale Entrex’s industry leading blockchain-enabled alternative trading market.” It is unclear whether this agreement will allow Long Blockchain to actually enter the blockchain field for the first time.

According to MarketWatch data, the current market cap of Long Blockchain is at $5.38 million. A Forrester Research report published in November 2018 argued that companies are stopping to use the term “blockchain” because they think it is overhyped — all of which seems to indicate that Long Blockchain is running out of hype-induced steam.