The never ending tragedy known as the Eurozone is flirting with disaster and the unknown consequences of what would happen if Greece is ejected by brute force or leaves by sheer will from the EU.

The never ending tragedy known as the Eurozone is flirting with disaster and the unknown consequences of what would happen if Greece is ejected by brute force or leaves by sheer will from the EU. Interestingly enough, the first Bitcoin ATM has arrived in Athens just in time.

The clear lesson being learned is the recipe of political and social integration before economic integration makes a terrible meal.  A lot of noise and overcomplicated explanations have been put forth as to what will happen.

In reality, there are four options left as to how this can play out:

The latest news from Athens is that Prime Minister Alex Tsipiras has announced a referendum to be held on July 5 to accept the bailout proposal  given by Greece’s foreign creditors.

This directly contradicts the weekend deadline that is needed to make a viable deal happen and is just more of the same from Greece to buy extra time. Expect fireworks this weekend.

Below is a key timeline of events for Greece over the next month: 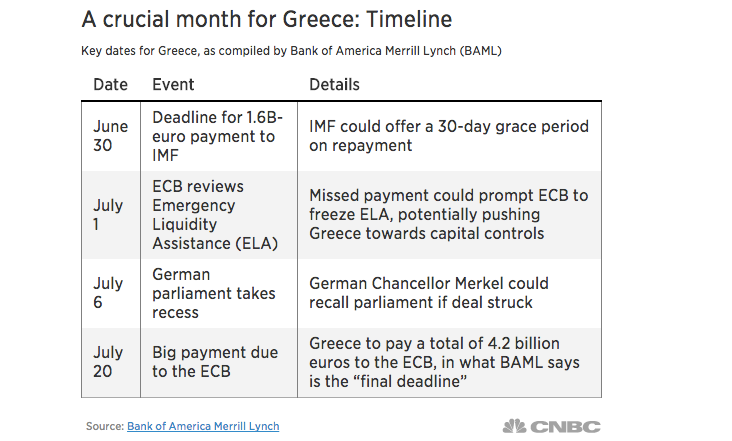 As the chart above shows, Greece needs to make a EUR1.6 billion debt repayment to the IMF. Creditors have offered to release EUR15.5 billion of funding, EUR1.8 billion would be available immediately conditional on Greece carrying out more reforms.

To receive this money, the EU is asking Greece to take on more cost cutting and austerity measures, which include the following:

Meanwhile, Athens wants a concrete commitment to debt relief, which creditors are not offering.

This is a hard pill for Greece to swallow, as Tsipiras ran on a platform of avoiding more cuts and higher taxes at all costs. Accepting this proposal will leave Greece a zombie country not able to control its own economic and financial destiny. However, in reality, it gave this up when it joined a flawed Monetary Union.

Greece could refuse to accept the terms being offered and ask for a different set of reforms that are less stringent and don’t choke off the entire populace.

Alternatively, they can flat out refuse to accept a deal and hope the EU caves in since it certainly fears the implications of a Greek default i.e. contagion. According to many pundits, a Greek default will be “contained.”

The Guardian has reported that “eurozone finance ministers and Greece’s creditors are to draw up plans for emergency measures to ring-fence the country’s financial system unless the Greek prime minister, Alexis Tsipras, accepts the creditors’ terms for a five-month extension of Athens’s bailout on Saturday.”

Imagining a Greek exit (Grexit) can be contained is a pipedream. This is not about Greece at all but about the other countries that will follow suit if Greece leaves (Spain, Italy, & Portugal). Not too far in the future (September) is an upcoming Spanish election, in which the far left party, Podemos, has a commanding lead.

Spain has suffered a similar fate to Greece since entering the EU and is still in the midst of a deep recession. It would be highly likely that other countries would follow suit so this could play into Greece’s hand in negotiations.

In anticipation of the real possibility of default, people have been rushing to withdraw money from Greek Banks.

As the chart below shows, this has been going on for quite a while and not due to the most recent events in Greece. Deposits have fallen to their lowest level in 11 years, dropping by 3.7 billion pounds to 135.7 billion pounds, according to data from the European Central Bank. 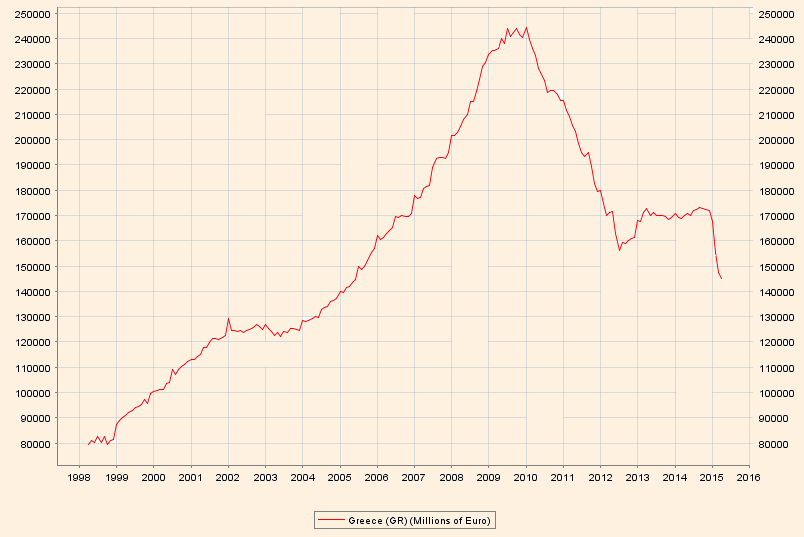 Default will have its obvious implications: a complete collapse in economic output, a run on banks, Greek commercial banks being weened from the EU, capital controls being placed on Greece’s citizens as the banks have to deal with implications of default, unemployment rising even higher (see chart below), and complete social chaos.

Inflation will rise dramatically and could potentially spiral into hyperinflation as Greek Central Bank will need to begin printing its own currency, since it will have to drop the Euro. Note: Those figures imply 1.4 million unemployed (according to official records) out of a population of ~10 million. Unemployment Levels are at their highest levels since 2006, and will increase exponentially in a default.

Greece may choose to swallow this bitter pill as Iceland did, which led to a lot of short term pain, followed by eventual growth and a return to some kind of economic normalcy.

Meanwhile, a run on the banks is already being reported. According to a CNBC article written by Holly Ellyatt and Everett Rosenfeld:

“Hours after the call for a referendum, reports about long lines for cash machines started appearing on social media.”

Friend in north Athens tells me his wife dashed out to ATM and line was already 30-40 long. #Greece t.co/c9V6JIRUDw

It will be interesting to see the numbers around of how many Greeks are using the first bitcoin ATM to launch in Athens this past week.

While using bitcoin as a national currency may be a bad idea for Greece, using bitcoin as an alternative to the Euro and the Dollar in fears of a default, might be something some Greeks decide is a reasonable strategy as they panic to access their money and try and decipher what exactly capital controls might mean. The world will find out soon enough what unfolds. What might not be clear, despite the result, is the aftermath of the decision and its impact on the entire global macro economy. Interesting days ahead.