Several major cryptocurrencies have seen strong buying at lower levels, suggesting that the uptrend is likely to resume once Bitcoin finds support.

Bitcoin (BTC) rallied above $10,000 on May 7 and just when everyone was getting ready for the long-anticipated halving surge the top-ranked cryptocurrency on CoinMarketCap plunged over 15% to hit a low of $8,130.58.

However, the sharp fall in price did not attract further selling, which suggests that traders are not panicking and dumping their positions. This indicates that the sentiment is to continue buying on the dips.

When Bitcoin plummets, it drags most cryptocurrencies along with it, but it is also important to remember that several major cryptocurrencies have been in an uptrend for the past few weeks.

Corrections in an uptrend offer a buying opportunity to the traders who had missed the bus earlier. With the Bitcoin halving less than two days away, volatility is likely to remain high. Therefore, in the next few days, traders might consider reducing their position size to keep their risk under control. 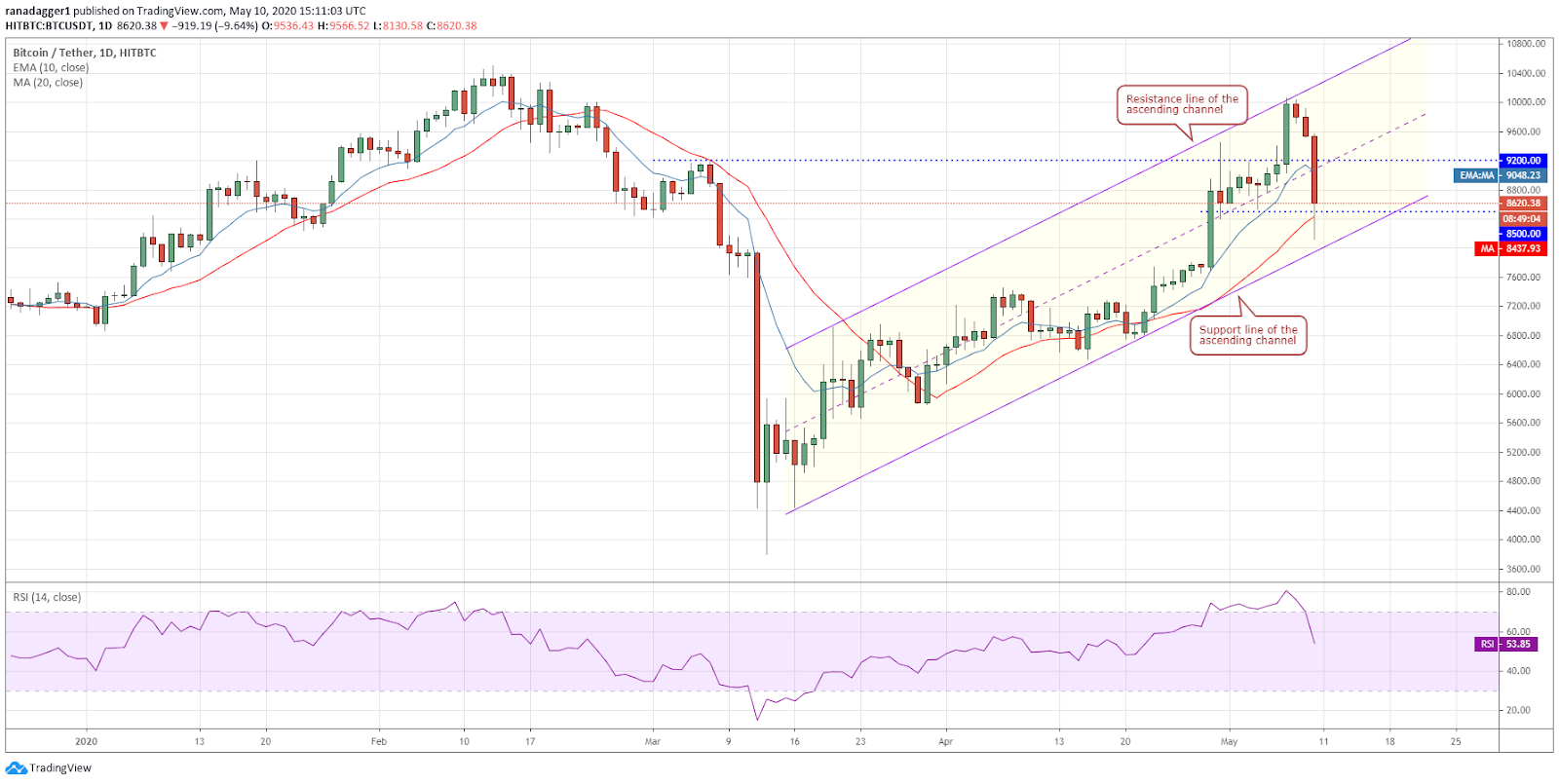 After a minor correction on May 8 and 9, the BTC/USD pair plummeted on Saturday evening. The failure of the bulls to sustain the price above the previous resistance turned support at $9,200 could have led to selling by the bulls and initiation of short positions by the bears.

The pair is currently trading inside an ascending channel where the price moves between the support line and the resistance line of the channel.

$10,000 was close to the resistance line of the channel and from there the pair fell to $8,130.58, which is just above the support line of the channel. The strong bounce off this level, as seen from a long tail on the downside, is a positive sign.

The first sign of weakness will be a drop below the channel. If that happens, long positions should be avoided until a new buy setup forms once again. 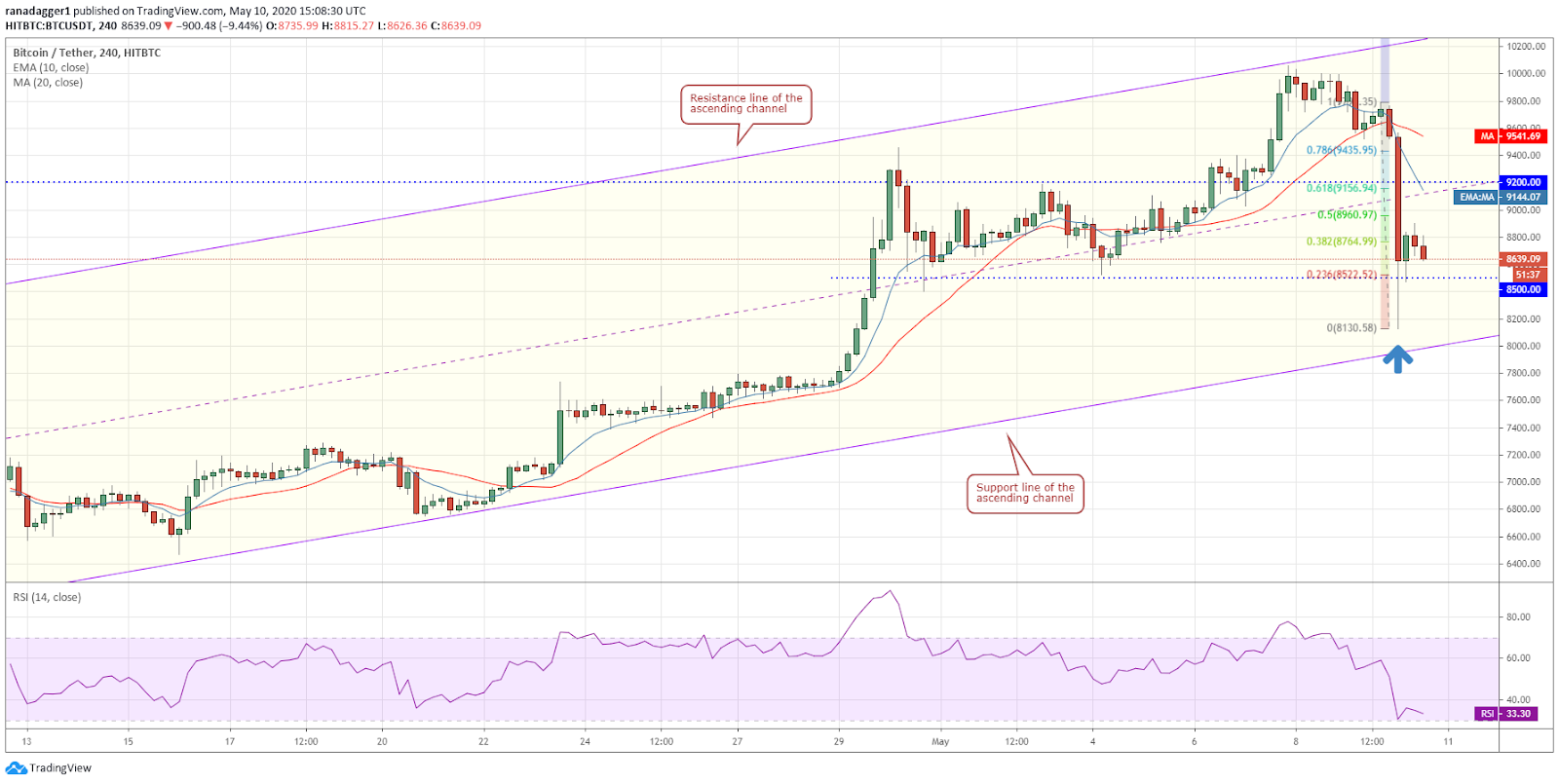 The 4-hour chart shows that the price dropped sharply within a short time frame (shown via the blue arrow on the chart). If the traders watch the 30-minute chart, they can see that the pair dropped from $9,566.52 to $8,130.58 within 30 minutes. Such a fall usually suggests liquidation by a large player.

Conversely, if the next drop breaks below $8,500, traders can wait for the price to bounce off the support line of the channel, which can offer another buying opportunity with stops placed just below the channel.

If the bears sink the price below the channel, it will be a huge negative as it will signal a possible change in trend. Therefore, bottom fishing should be avoided if the pair sustains below the channel.

Although Ether (ETH) broke above the resistance line of the ascending channel on April 29 and 30, the bulls failed to sustain the higher levels. That resulted in a correction, which found support at the 20-day simple moving average ($204) on May 7. 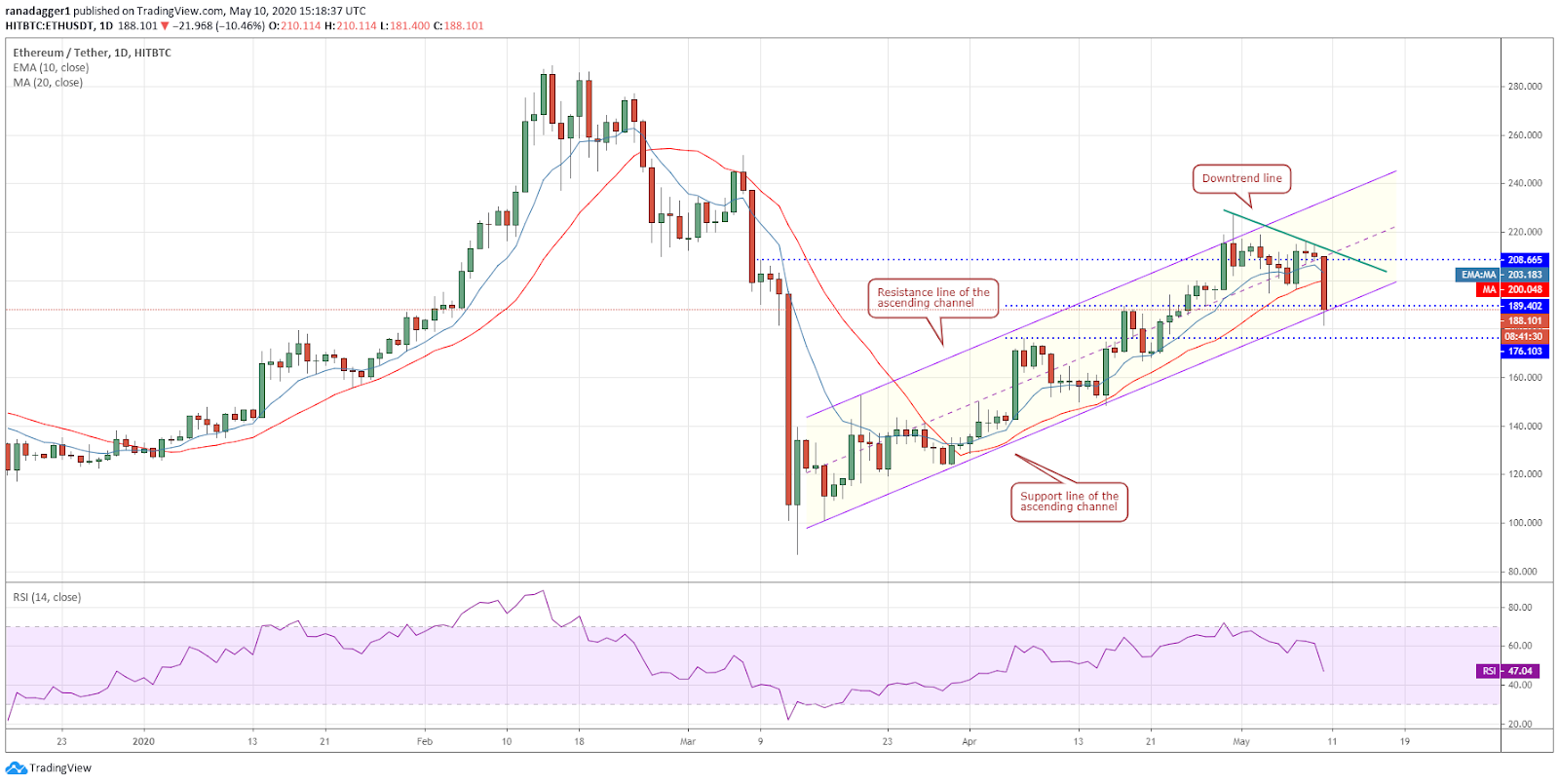 However, today, the 2nd-ranked cryptocurrency on CoinMarketCap turned down sharply and plunged below both moving averages and the support line of the ascending channel.

Due to this, the 10-day exponential moving average ($203) has turned down marginally and the relative strength index has slipped into the negative territory. This suggests that the bears are attempting to make a comeback. The price should sustain below the channel to confirm a change in trend.

Currently, the price has bounced off the support line of the ascending channel, which is a positive sign. This suggests that the bulls view the dips as a buying opportunity. The pair is likely to pick up momentum on a break above the downtrend line. 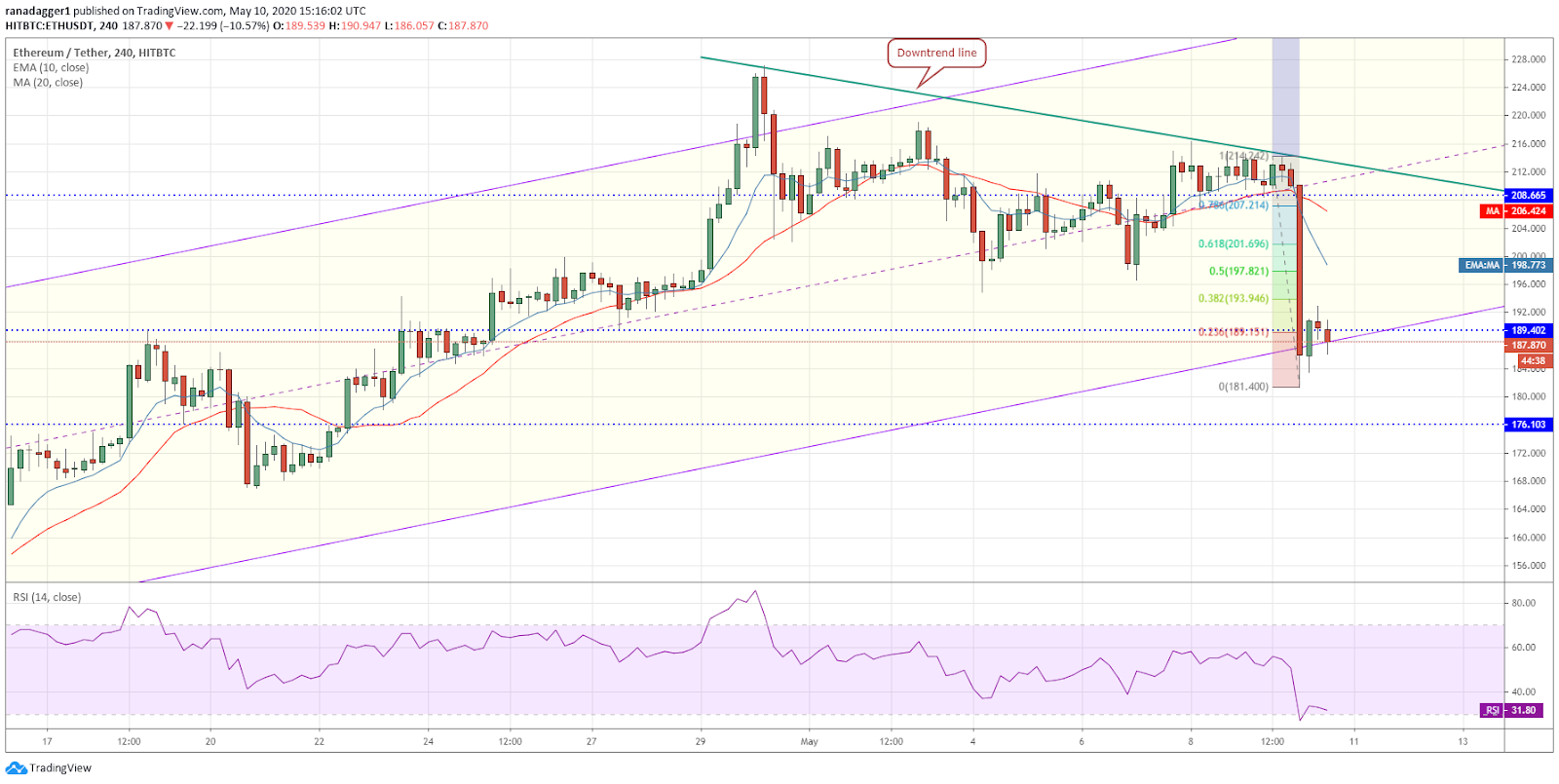 The ETH/USD pair is attempting to reverse direction from the support line of the ascending channel. However, the bears are defending the 38.2% Fibonacci retracement level of the most recent leg of the decline, which is at $193.946.

If the price turns down and plummets below $181.40, it will signal weakness and could result in a decline to $167 and below it to $150. Therefore, traders can initiate short positions below $181 with stops placed just above $194.

Conversely, if the price turns up from the support line of the channel, it will signal buying on dips. Therefore, the bulls can buy the bounce off the channel with the stops placed at $181. If the bulls push the price above $197.821-$201.696 resistance, a rally to the downtrend line is possible.

As the markets are volatile, traders should keep trailing their stops higher to reduce their risk.

Tezos (XTZ) has been trading inside an ascending channel, which shows that the trend is up. However, the bears have been aggressively defending the $3 levels for the past few days. Although the bulls broke above this level on April 29 and 30, they could not build up on the breakout. 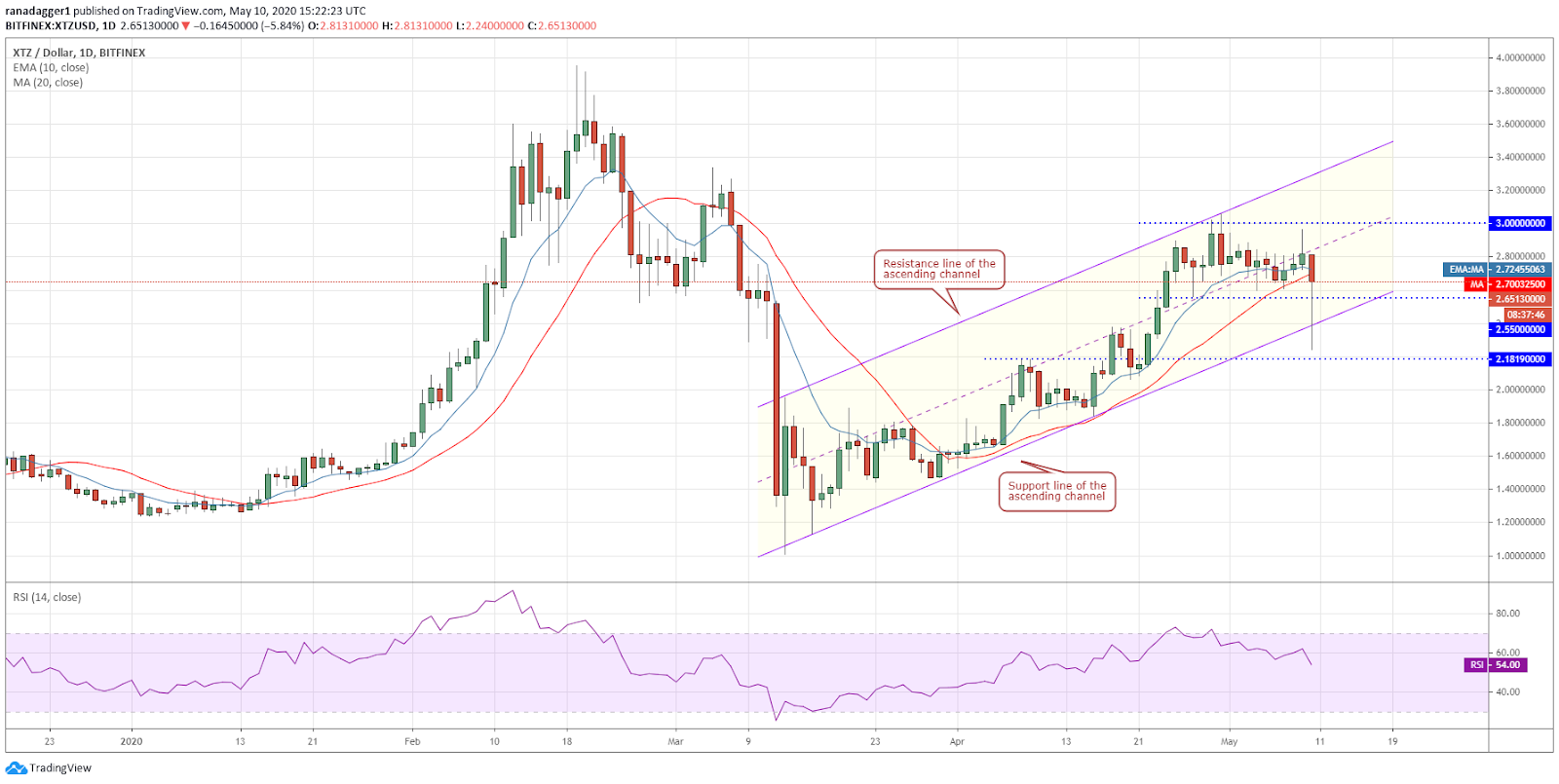 On May 9, the 10th-ranked cryptocurrency on CoinMarketCap turned around from just below $3 levels. The selling intensified today as the price slipped below the strong support of $2.55.

The 10-day EMA ($2.72) has turned flat and the RSI has dipped to just above the midpoint, which suggests a balance between the bulls and the bears. If the bulls can keep the price above $2.55, it could offer a buying opportunity. 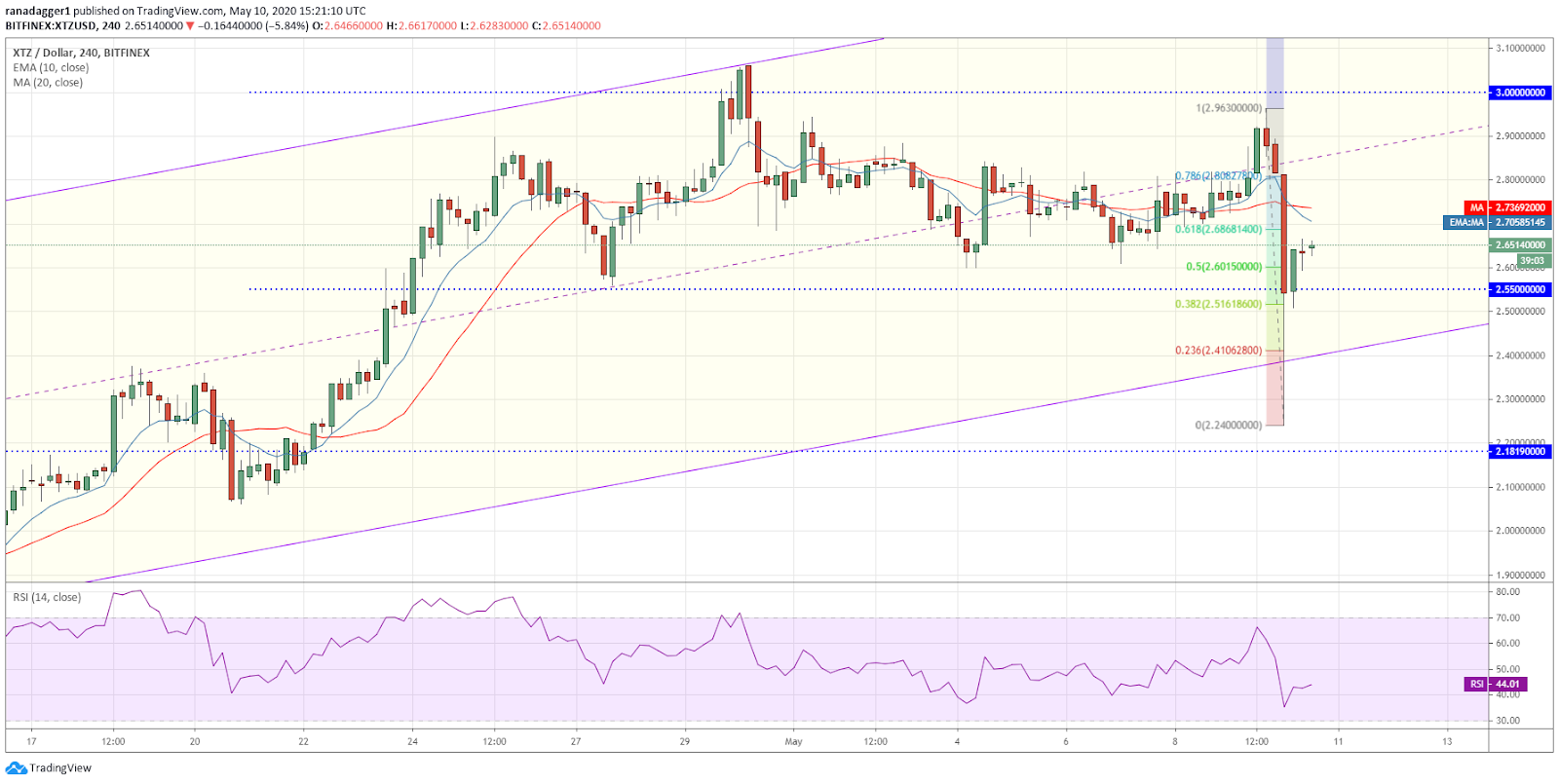 If the price turns down from this resistance zone, a fall to $2.50 and below it to the support line of the channel is possible. The bulls are likely to defend this zone aggressively. If the price bounces off the zone, it could offer a buying opportunity to the traders.

The stops for this trade can be kept just below $2.20. On the upside, a rally to $2.70 and then to $3 is possible. The traders can trail the stops higher as the price moves up.

This bullish view will be invalidated if the next dip breaks below the support line of the channel and sustains below $2.240. If this level cracks, long positions can be avoided until a new buy setup forms.

Cardano (ADA) has been facing stiff resistance at the overhead resistance at $0.0522712 while the bulls have been buying the dips to the support at $0.0468137. This tight range trading suggests a balance between buyers and sellers. 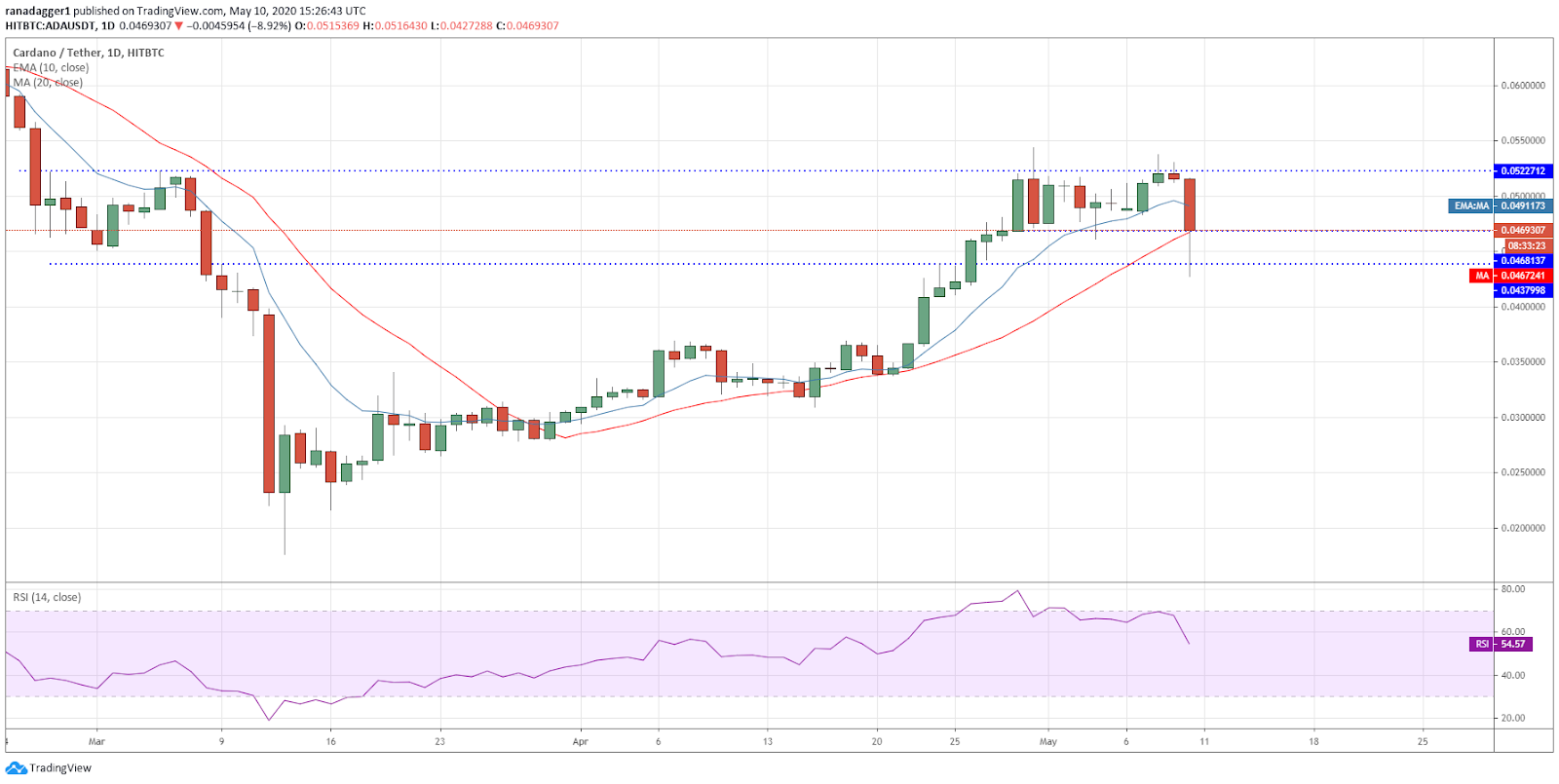 The 13th-ranked cryptocurrency on CoinMarketCap plunged to a low of $0.0427299 today but the sharp recovery from the lows shows aggressive buying by the bulls. If the bulls can sustain the price above $0.0468137, it could offer a buying opportunity.

Conversely, if the price again slips back below $0.0468137, it will signal weakness. Below this level, a retest of $0.0427299 is possible. If this support also cracks, a deeper correction will be on the cards. 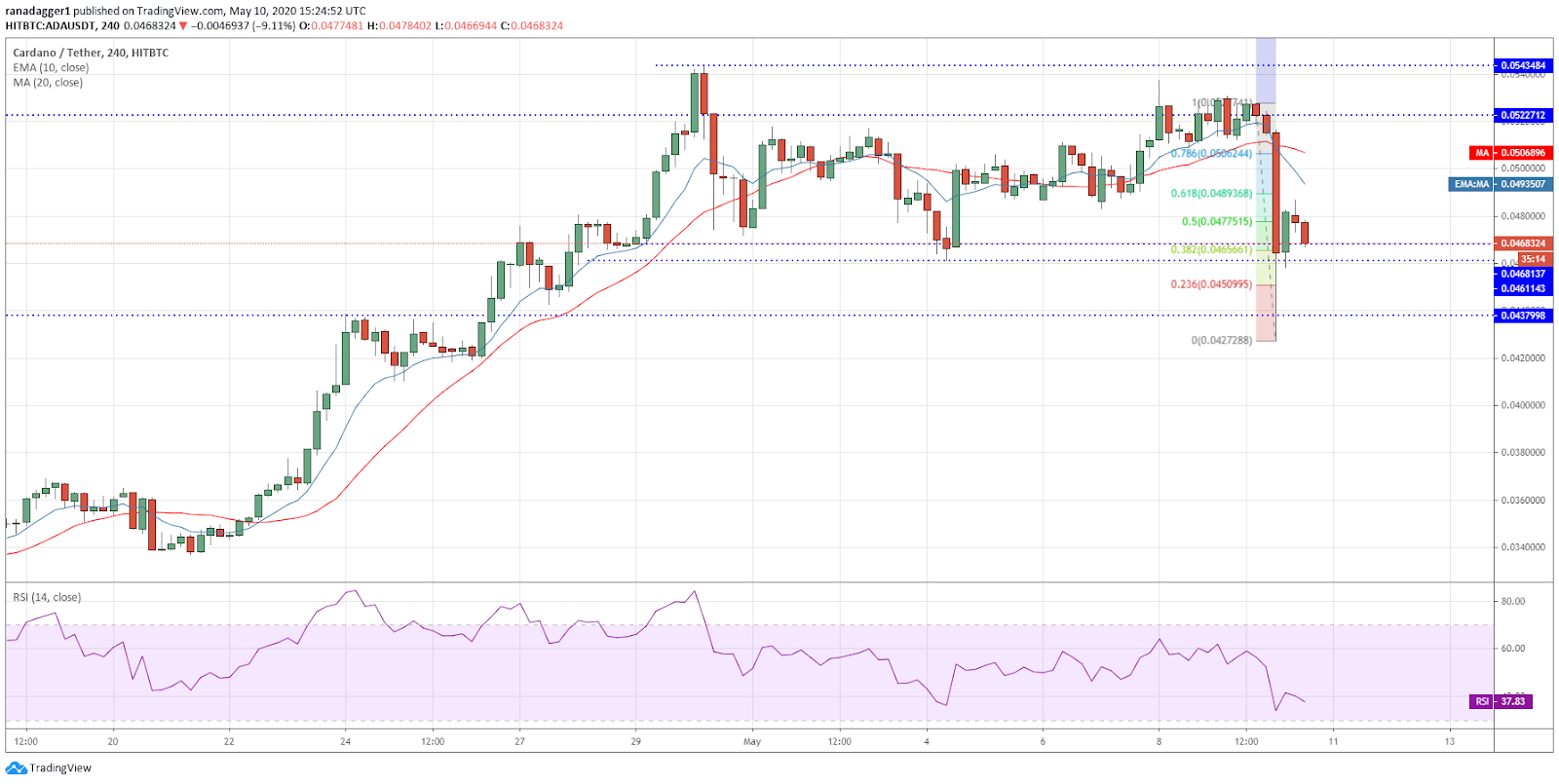 The 4-hour of the ADA/USD pair shows that the price is stuck in a $0.0543484-$0.0461143 range. Though the price dipped below this range, the bulls could not sustain the lower levels. This resulted in a sharp pullback, which shows strong buying on dips.

This bullish view will be invalidated if the bears sink and sustain the price below $0.0461143. If that happens, a deeper fall is likely, hence, traders can avoid bottom fishing below this level until a new buy setup forms.

NEO has been trading inside the ascending channel for the past few weeks. Though the bulls broke above the resistance line of the channel on May 8, they could not sustain the breakout. 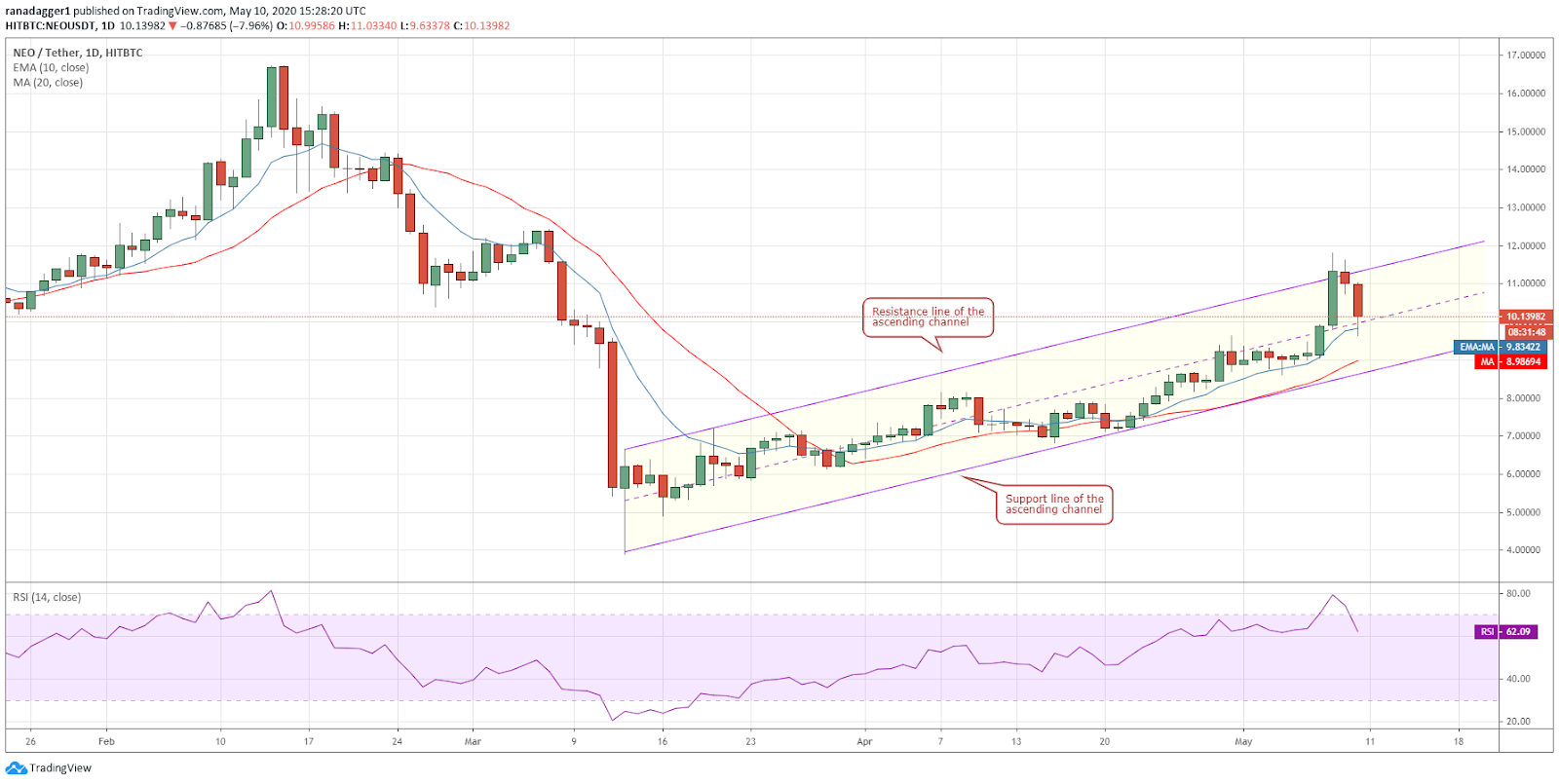 As a result, the 20th-ranked cryptocurrency on CoinMarketCap again dipped back into the channel. However, with both moving averages sloping up and the RSI in the positive territory, the advantage is with the bulls.

Today, the bulls purchased the dip to the 10-day EMA ($9.8), which is a positive sign. This shows that the bulls are not waiting for a deeper fall to enter long positions. The trend will remain positive as long as the price remains inside the channel.

The first sign of weakness will be if the bears sink the price into the bottom half of the channel. A break below the support line of the channel will signal a change in trend. 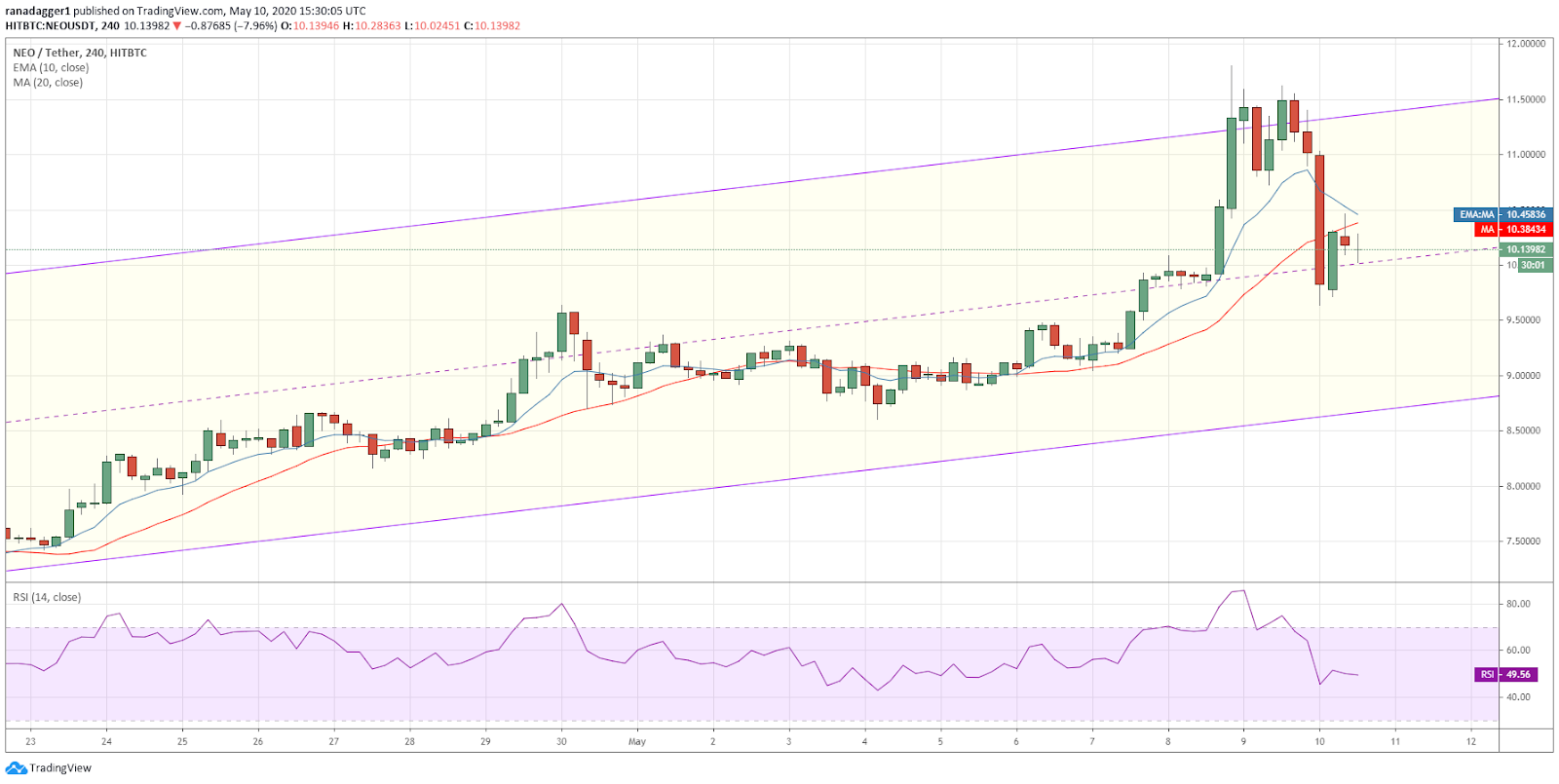 However, strong buying close to $9.64 levels has pushed the NEO/USD pair back into the top half of the channel. This is a positive sign. If the bulls can scale the price above $10.50, a rally to the resistance line of the channel at $11.30 is possible Therefore, traders can buy at $10.50 with a stop-loss below $9.60.

On the other hand, if the pair dips below $9.63378, a drop to the support line of the channel is possible. A bounce of this level can also offer a low-risk buying opportunity.