If Bitcoin remains in an uptrend, these altcoins are likely to outperform the other major cryptocurrencies this week.

The institutional interest in Bitcoin (BTC) has increased in the past few months, according to data from Grayscale Bitcoin Trust. If the trend continues at the same pace, by March 2021, GBTC would have purchased 75% of the newly mined Bitcoin during the period. By that time, its total holding of the top-ranked cryptocurrency on CoinMarketCap would increase to 3% of the total circulating supply. If this happens, it could be a huge sentiment booster for investors who believe institutional investment is the key for mass adoption.

Reddit co-founder Alexis Ohanian has said that he holds a percentage of his wealth in crypto and he does not want to change it. Ohanian believes that Bitcoin is a hedge due to the fact that several “OGs of Wall Street” have now entered the crypto space.

Bitcoin (BTC) has been trading inside an ascending channel, which shows that the medium-term trend is up. However, the short-term has stalled as the price has dipped below both moving averages. 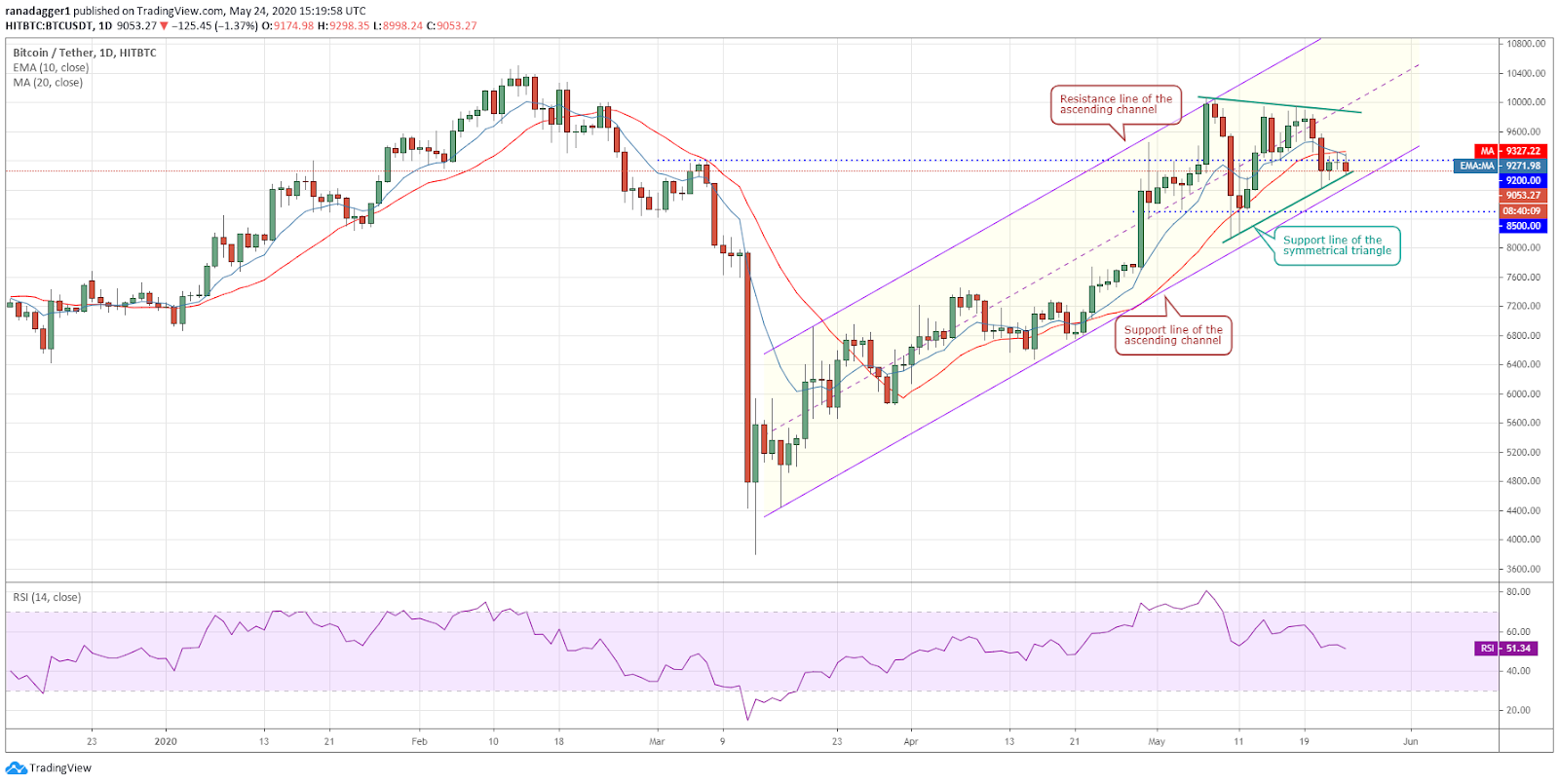 The BTC/USD pair has formed a symmetrical triangle, which usually acts as a continuation pattern. The 10-day exponential moving average is sloping gradually and the relative strength index is just above the 50 levels, which suggests a balance between supply and demand.

While the best way to trade a symmetrical triangle is to wait for the price to breakout or breakdown from it, another possible strategy is to buy close to the support line of the triangle as this helps in keeping a close stop-loss.

If the bears sink the price below the support line of the triangle, it will be a first sign that the uptrend might be in danger. A break below the channel will confirm a change in trend. However, the end of an uptrend does not mean a downtrend has started as the prices might remain range-bound. The downtrend might start on a break below $8,130.58. 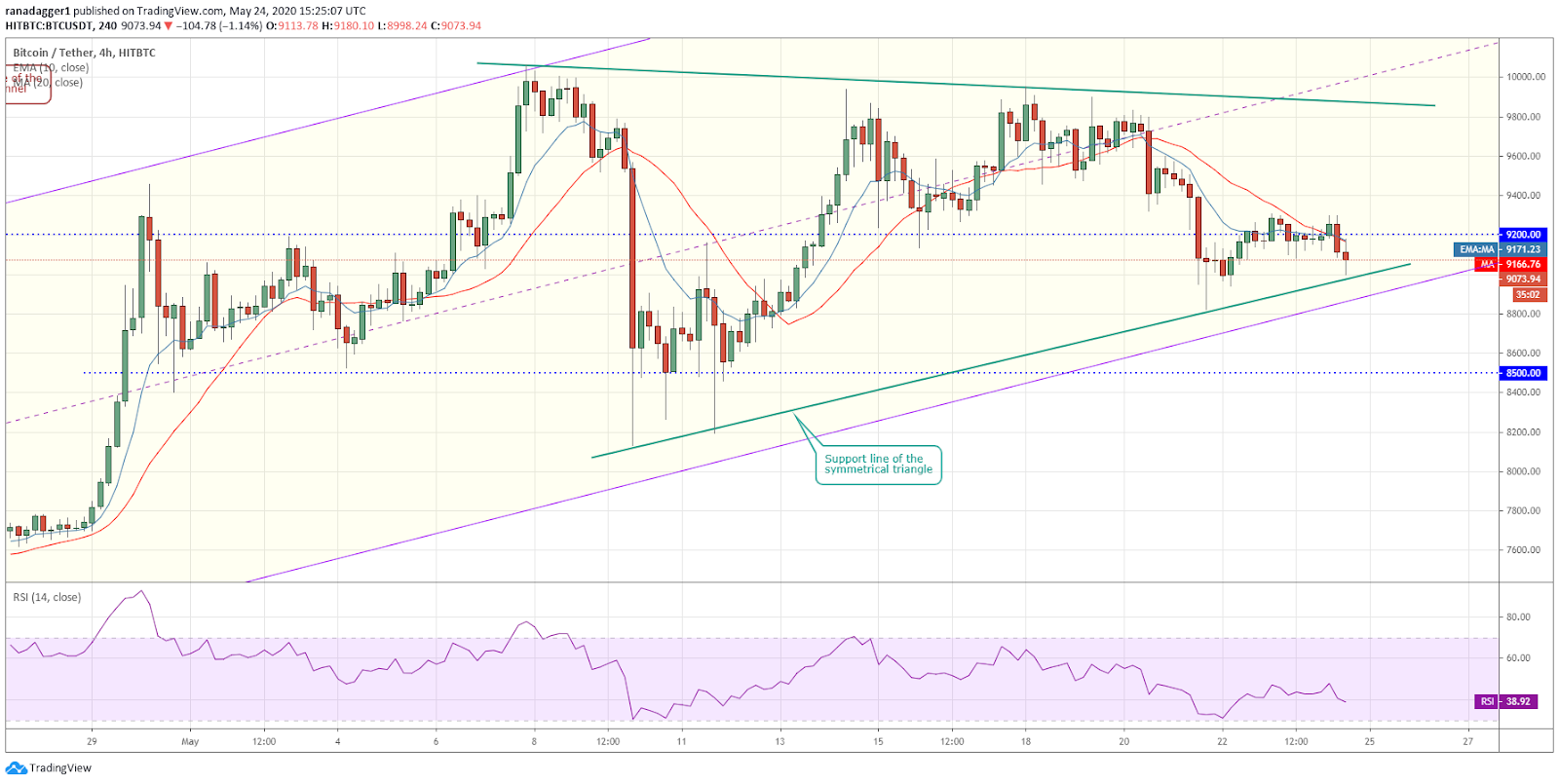 The 4-hour chart shows that the bulls are aggressively buying the dip to the support line of the symmetrical triangle. This is a positive sign as it confirms demand at lower levels. The bulls might now attempt to carry the price to the resistance line of the triangle, which is close to $9,850. This is the first target objective.

A break above $9,350 could indicate the resumption of the up move. This can offer a buying opportunity to the traders with a stop-loss of $8,950, which is just below the support line of the triangle.

As the pair moves up, the stops can be trailed higher. Traders can book partial profits close to $9,850 and give some wiggle room to the remaining position because a breakout of the triangle will give it a pattern target of $11,778.

Tezos (XTZ) has been trading inside an ascending channel, which shows the path of least resistance to the upside. However, the bulls have been facing stiff resistance at the downtrend line. 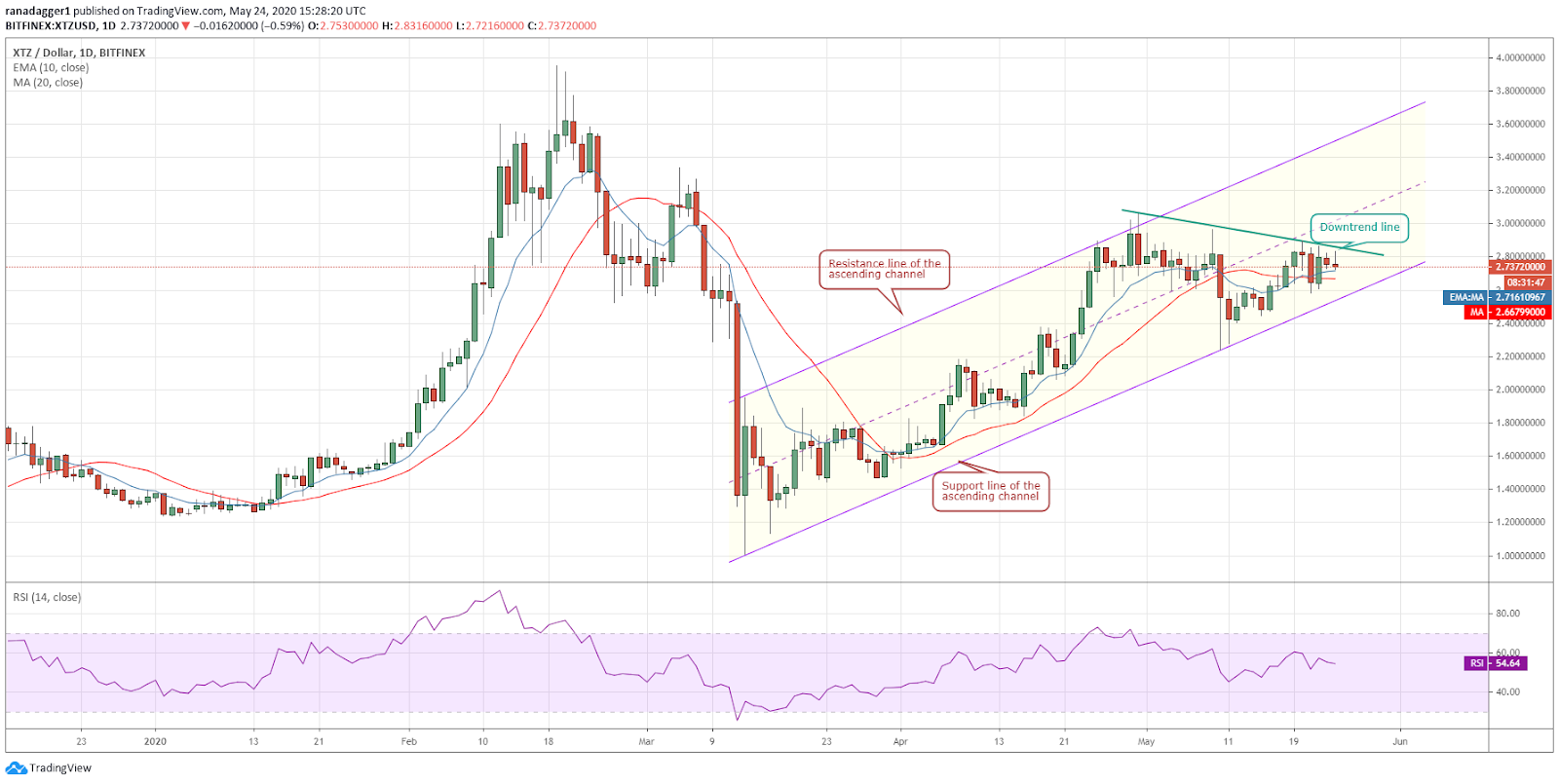 This suggests that the bears are attempting to change the trend. If the 10th-ranked cryptocurrency on CoinMarketCap turns down from the current levels and plunges below the support line of the channel, it will signal a change in trend.

Conversely, if the bulls can push the price above the downtrend line, it could signal the resumption of the uptrend. The 10-day EMA has been gradually sloping up and the RSI is just above the midpoint, which suggests that bulls have a slight advantage.

Above the downtrend line, a rally to $3.0603 is likely. If the momentum can carry the price above this level, the uptrend can reach the resistance line of the channel, close to $3.60 in the medium-term. 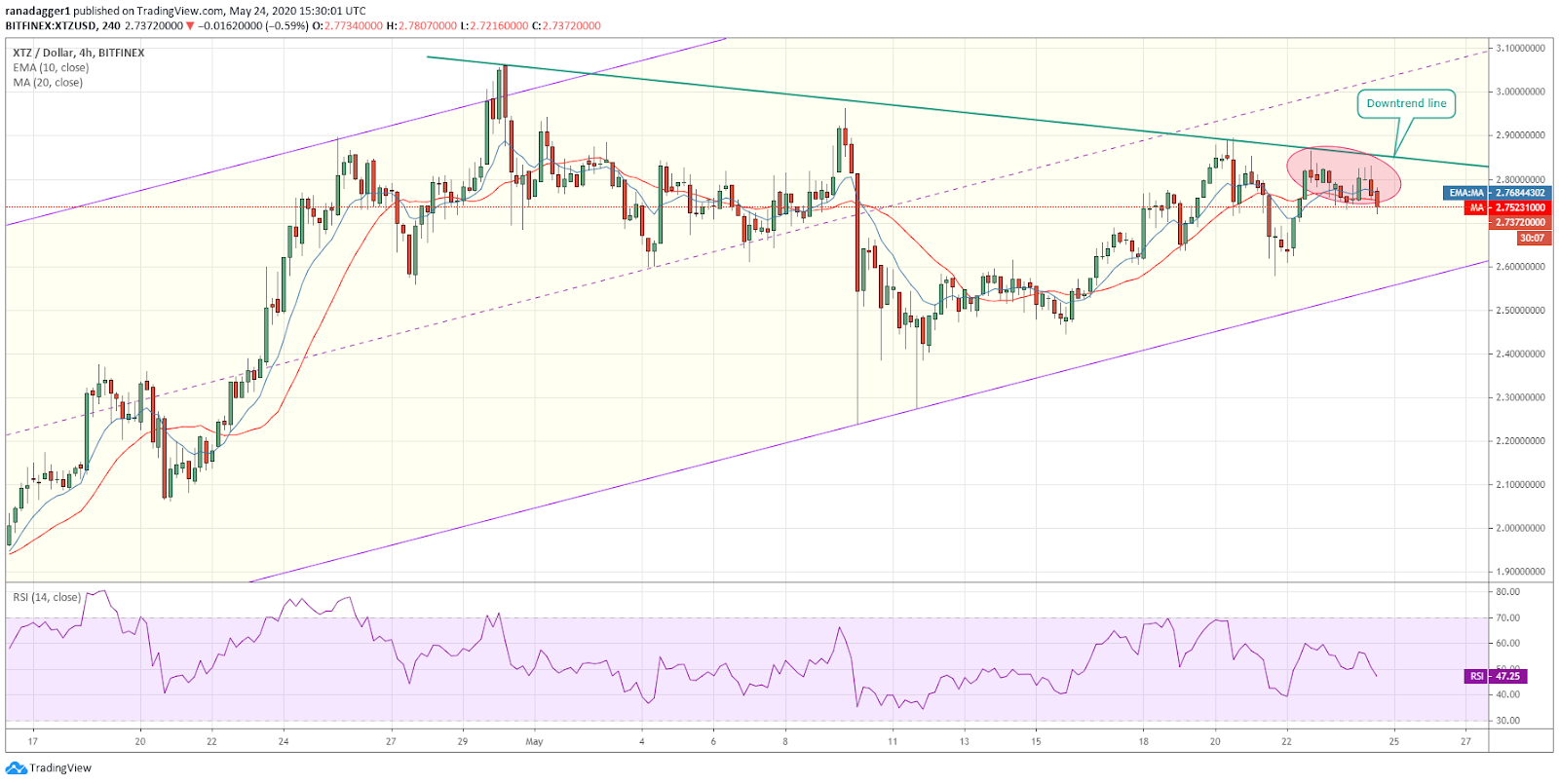 The 4-hour chart suggests that the bears are aggressively defending the downtrend line. However a minor positive is that the bulls have not given up much ground in the past two days (marked via ellipse on the chart).

Cardano (ADA) continues to be in an uptrend. The altcoin resumed its up move following a breakout of the recent highs at $0.0543484 on May 19. However, the sharp drop on May 21 dragged the price back below the breakout level. 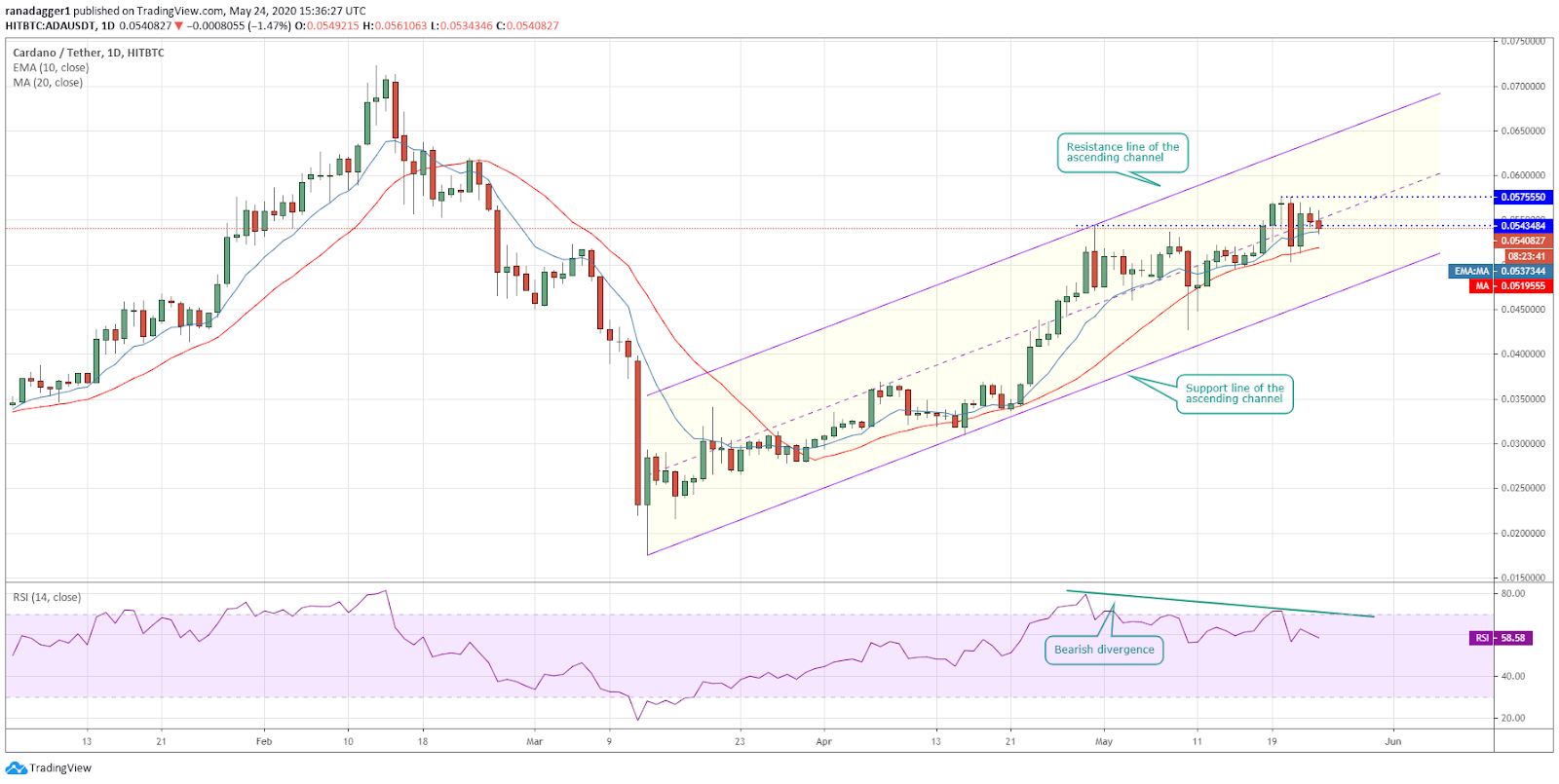 The bulls aggressively purchased the dip to the 20-day simple moving average on May 22 and pushed the price back above $0.0543484. This move suggested strong demand at lower levels.

Currently, the 11th-ranked cryptocurrency on CoinMarketCap has again dropped below the critical level at $0.0543484. However, the positive sign is that the bulls are attempting to defend the 10-day EMA.

If the price bounces off the current levels, the bulls are likely to make one more attempt to scale the price above $0.057555. If successful, the uptrend is likely to continue. The first target on the upside is a rally to the resistance line of the channel.

On the other hand, if the bears sink the price back below $0.050, a drop to the support line of the channel is possible. A break below the channel will indicate a change in trend. The bearish divergence on the RSI suggests that the bulls might be losing momentum. 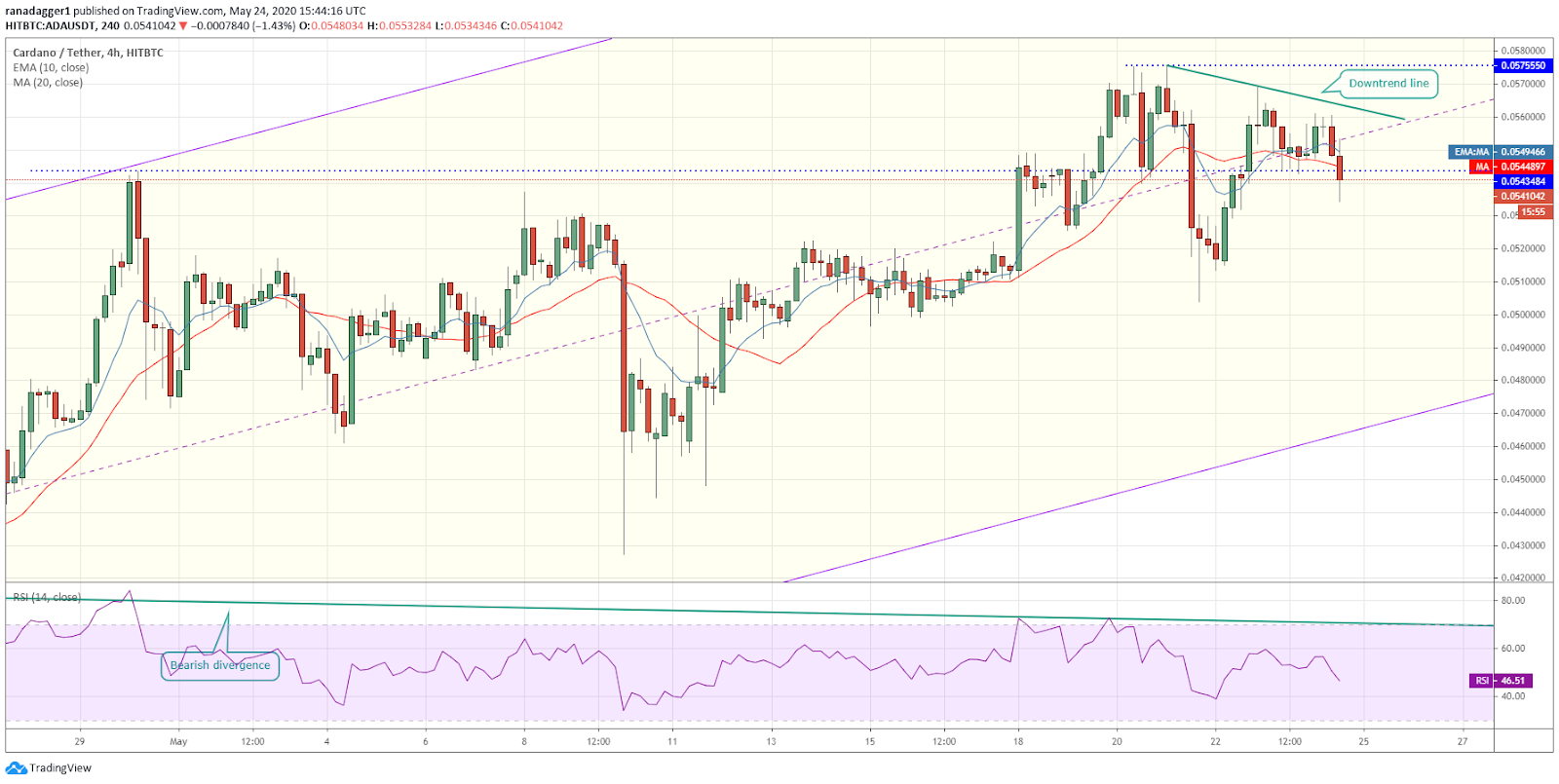 The failure of the bulls to carry the price higher has attracted profit booking. As a result, the ADA/USD pair has again broken below $0.0543484. If the price sustains below this level, a drop to $0.0504050 is likely.

Conversely, if the pair turns around from the current levels and climbs back above $0.0543484, the bulls will again try to scale the price above $0.057555. Aggressive traders can buy 50% of the desired position above the downtrend line and the rest above $0.057555.

The target objective of this trade is a rally to the $0.0615-$0.063 resistance zone. This trade can be protected on the downside by keeping the stop-loss below $0.053.

Chainlink (LINK) has largely been range-bound for the past few days. Both the moving averages have flattened out and the RSI is just above the midpoint, which suggests a balance between demand and supply. 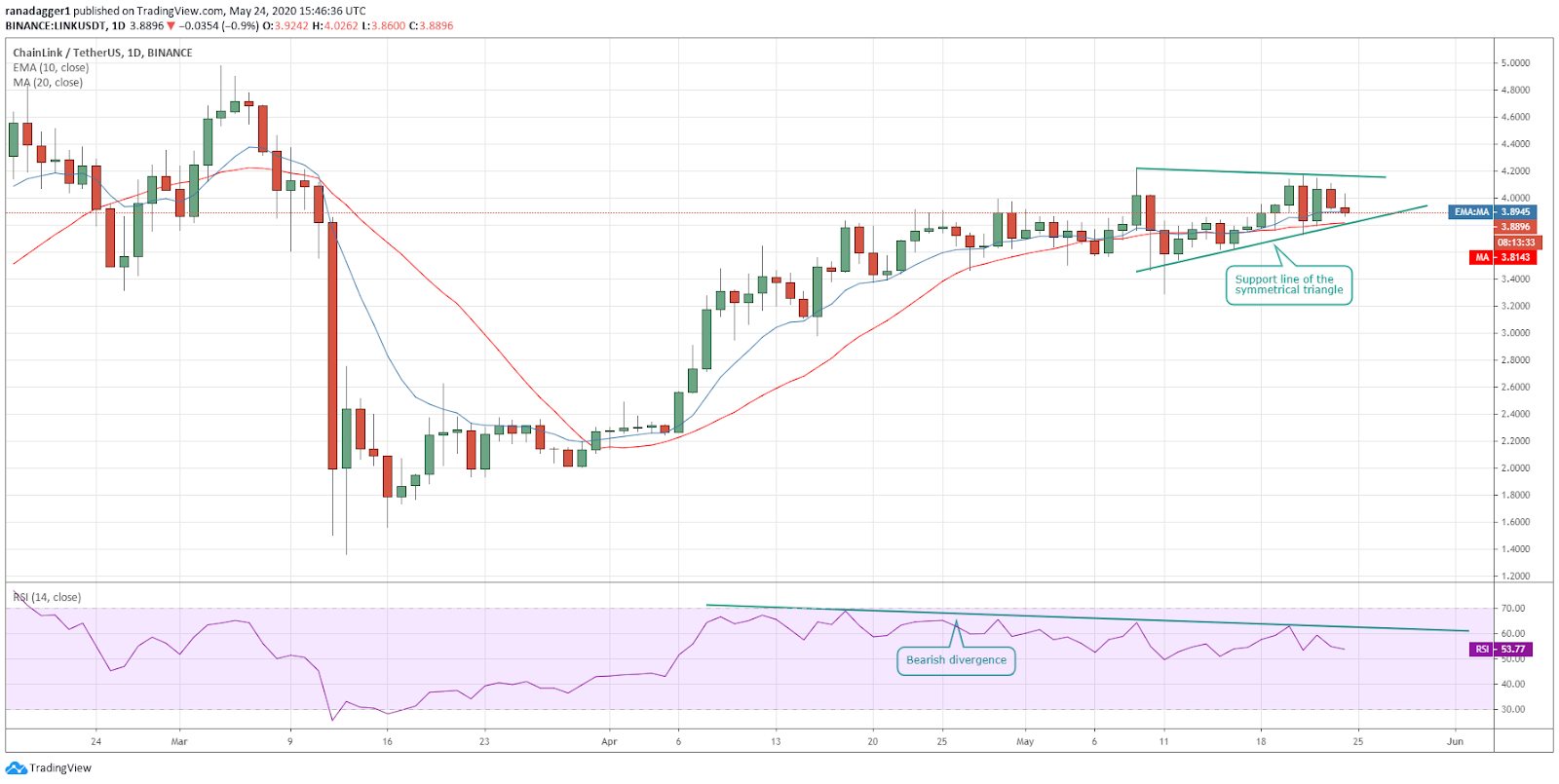 On May 21, the bulls attempted to resume the uptrend but they could not scale the price above the critical resistance at $4.2129. The bears again aggressively defended this resistance on May 22.

Currently, the 12th-ranked cryptocurrency on CoinMarketCap has formed a symmetrical triangle. A breakout and close (UTC time) above the triangle will resume the up move that has a target objective of $4.9127.

On the other hand, if the bears sink the price below the triangle, a drop to $3.4602-$3.2865 support zone is possible. A break below the zone could result in a drop to $3.0473 which is the pattern target of the breakdown from the triangle. 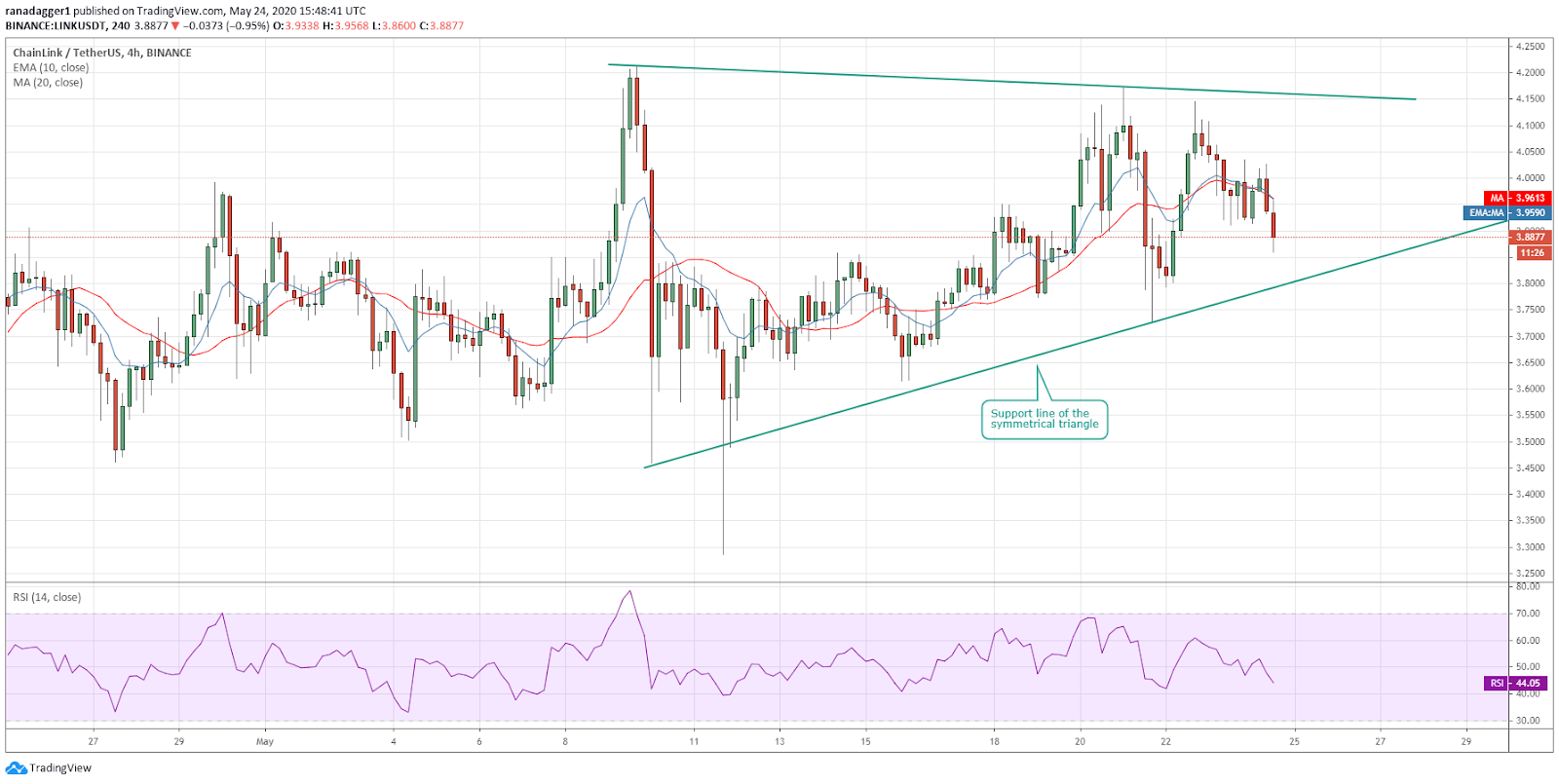 The 4-hour chart shows a symmetrical triangle formation. Although this setup largely works as a continuation pattern, it sometimes can also act as a reversal pattern. Therefore, it is best to wait for a breakout of the triangle before buying.

A breakout and close (UTC time) above the triangle will be the first sign that the bulls have overpowered the bears. Traders can wait for the LINK/USD pair to breakout above $4.2129 before initiating long positions.

The stop-loss for the trade can be kept below $3.7292 because if the bears sink the price below this level, a drop to $3.4602 is possible. Traders can avoid buying if the pair sustains below the triangle.

Ethereum Classic (ETC) is currently consolidating inside a symmetrical triangle. Both moving averages are flat and the RSI is just above the 50 level, which suggests a balance between buyers and sellers. 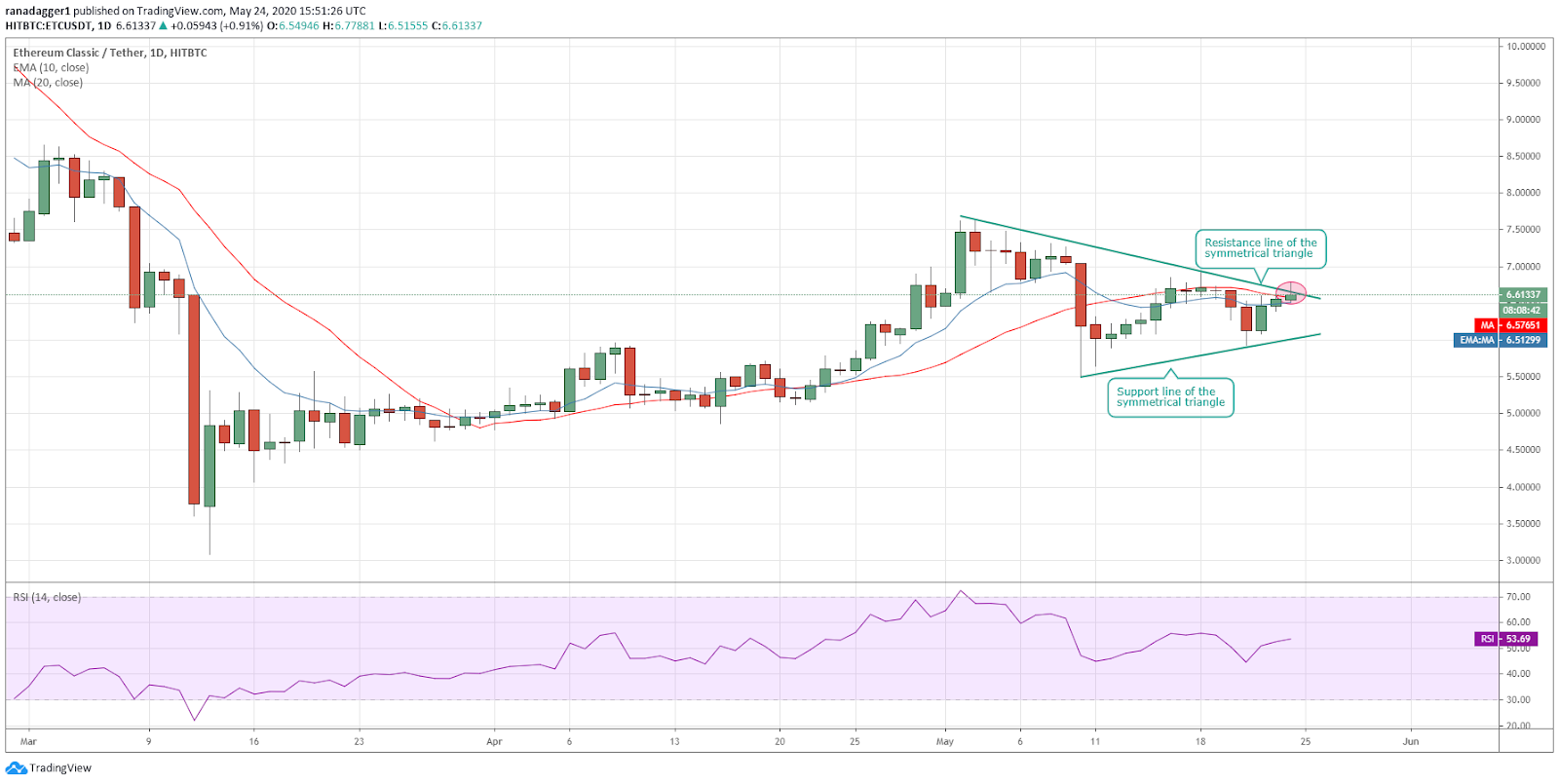 However, the balance will shift in favor of the bulls if they can push and close (UTC time) the price above the resistance line of the triangle. Above the triangle, the first target to watch out for is $7.62717 and then $8.4117.

Conversely, if the 19th-ranked cryptocurrency on CoinMarketCap turns down from the current levels, a drop to the support line of the triangle is likely. A breakdown of this support will signal the start of a new downtrend. 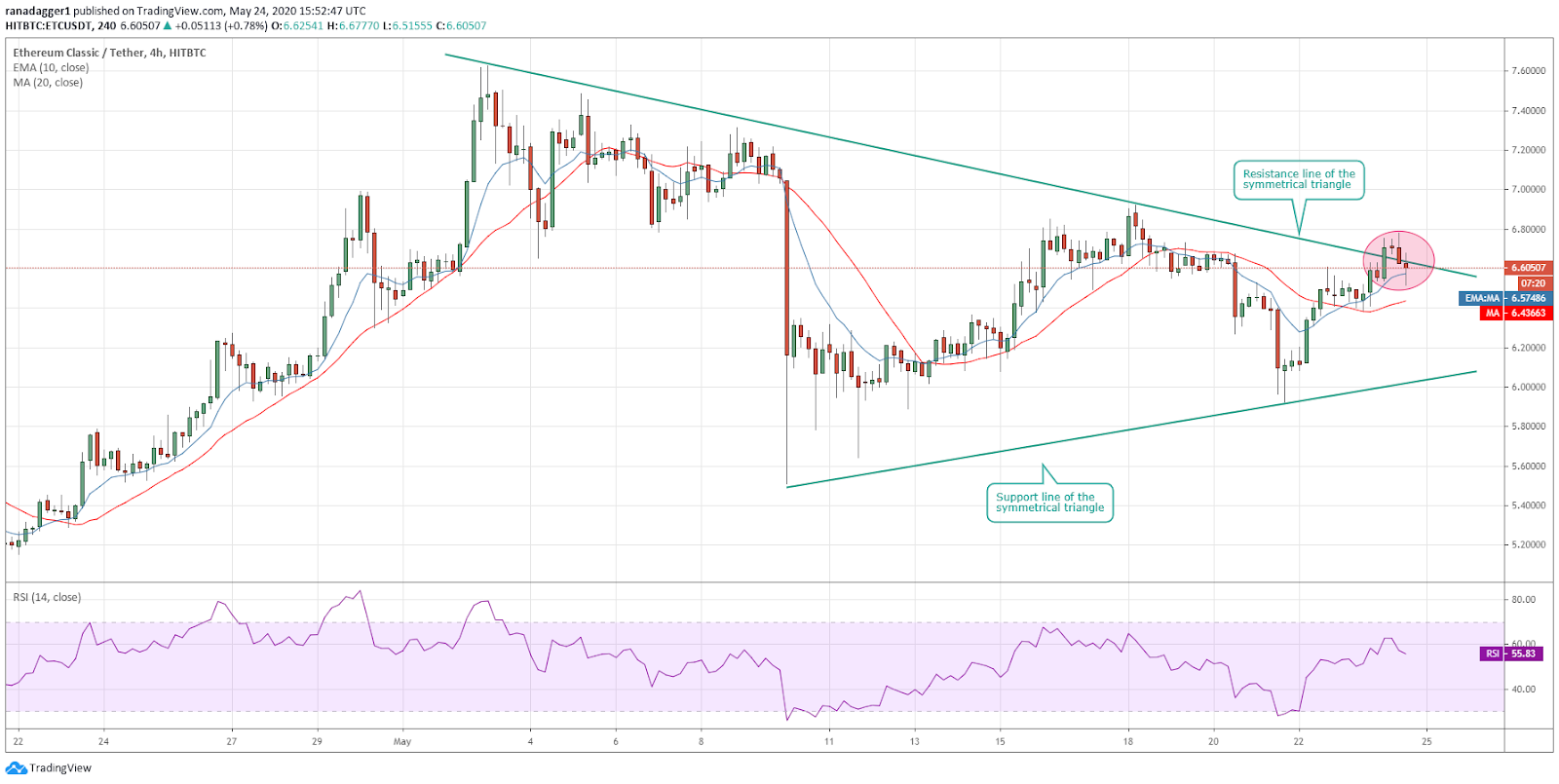 Currently, the ETC/USD pair has again dipped back into the triangle but the 10-EMA is acting as a support. If the pair turns around from the current levels and rallies above $6.80, the up move is likely to resume.

Therefore, traders can buy above $6.80 and keep a stop-loss at $6.38. If the bears sink the pair below $6.38, a drop to the support line of the triangle is likely. A break below the triangle could start a new downtrend.