7769 Total views
130 Total shares
Listen to article
0:00
News
Own this piece of history

As of July, D-E rated low-quality exchanges represented 64% of trading volume — a staggering $316 billion — whereas top-rated AA platforms accounted for just 5% or $31 billion.

Lower quality crypto trading volume looms large over the sector: yet, there is a silver lining, according to CryptoCompare.

In July, volume from the highest-rated trading platforms (AA and A) increased by 29% and 10% respectively, while E-rated exchanges — representing $142 billion — saw a 20% decrease in volume as compared with June. 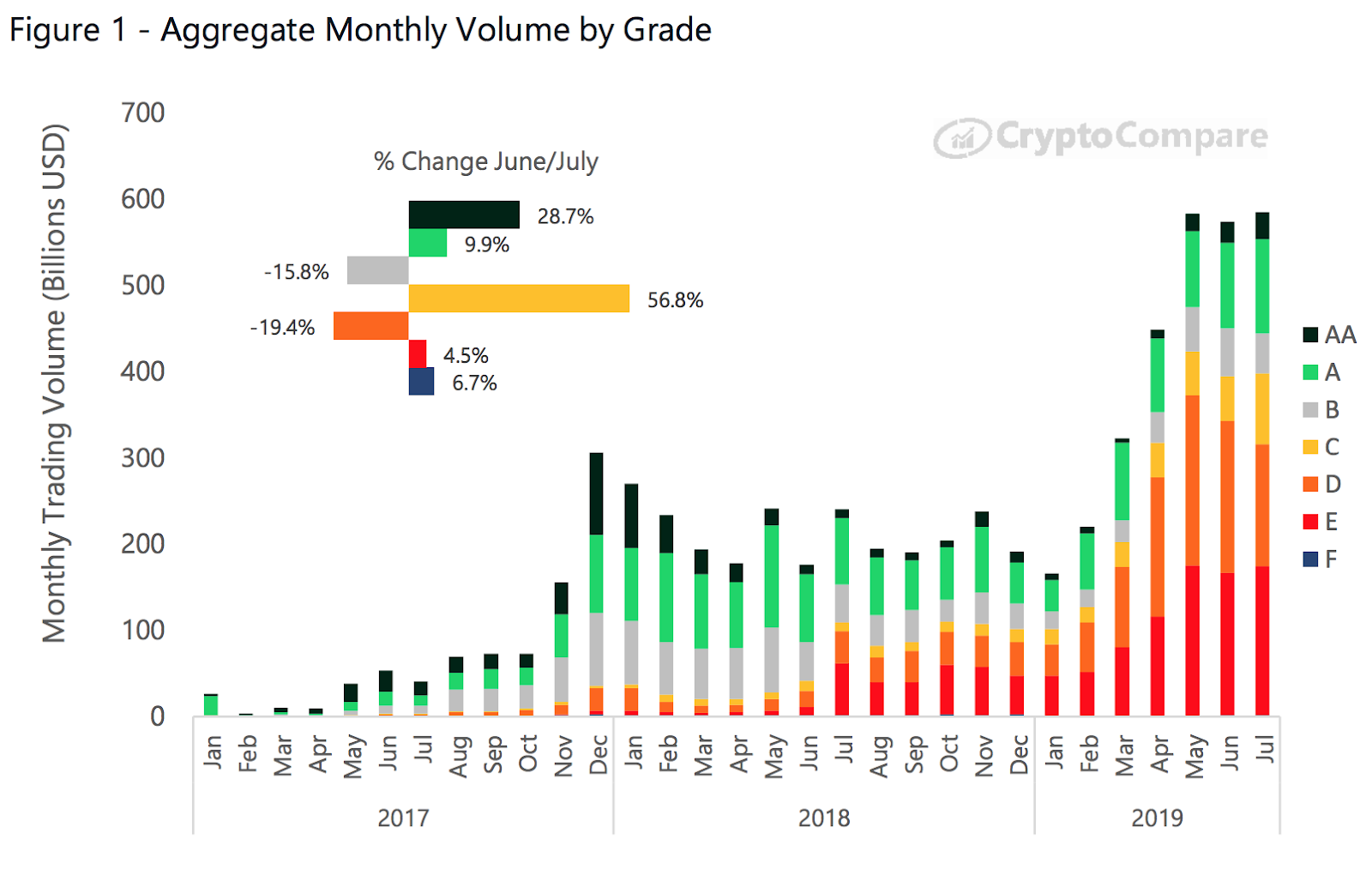 On aggregate, Cryptcompare’s data shows that volume from exchanges rated AA-B increased by 4.4% — as compared with a fractional 0.7% increase for low-grade (C-F) platforms.

Untrusted exchanges — all of them graded C-F — reported the largest average trade sizes in the market: LBank, Coinsbit and CoinBene saw average trades of  3.7, 1.6 and 1.1 BTC respectively.

Compared with AA-rated Coinbase, LBank’s average trade was approximately 15 times larger. Yet whereas Coinbase reported over 100,000 trades per day, LBank hosted an average of 25,000 trades daily.

The report reveals that four well-regarded platforms (AA-B) — Liquid, Binance, OKEx and BitFlyer — topped the chart for average daily trade count, with Liquid seeing well over 400,000 daily trades on average and Binance over 300,000.

As reported, there is an increasing awareness in the industry of the prevalence of unreliable trading platforms, faked trading volumes and market manipulation, which encompasses strategies such as wash trading and spoofing.

In mid-March, Bitwise Asset Management issued a damning report on Bitcoin (BTC) trading figures, claiming that up 95% of Bitcoin trading volume as seen on data aggregator CoinMarketCap (CMC) was fabricated by wash trading.

This June, CMC delivered an ultimatum to all exchanges in the global exchange market to disclose accurate data, saying that they would be delisted from the site if they failed to report trading data, volume and other relevant information with integrity.