All eyes are on Tesla stock price today as Bitcoin pulled back under $9,200 and appears to be entering a brief period of consolidation.

Bitcoin’s price (BTC) action has been relatively uneventful, especially when compared against the explosive price action of last week when the digital asset stomped through the $9K barrier and rallied all the way $9,530 for a strong monthly close.

This week all of the attention seems to be oriented towards Tesla, who’s stock traded around $250 in late October and today topped $940, representing an incredible 310% rally over the past 3 months. 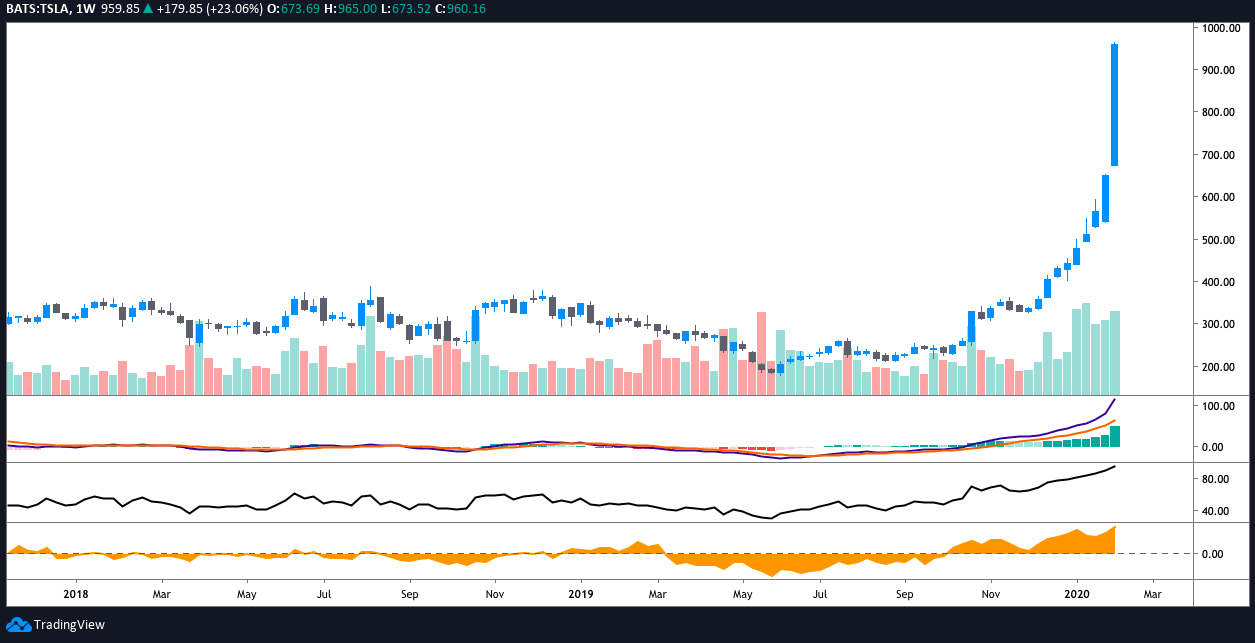 From a technical perspective, the stock is now overbought as the weekly relative strength index (RSI) currently sits at 94. Traders will recall that during Bitcoin’s parabolic rally in 2017 the weekly RSI topped out at 89.5 and was followed by a severe reversal after the cryptocurrency reached its peak at $19,800.

Today’s 19% surge could be the result of Argus Research boosting its price target for Tesla stock from $556 to $808, or possibly a long-term valuation update from Ark Investment Management who believe the stock could reach $7,000 to $15,000 per share by 2024.

FOMO could be another factor influencing the price as investors that continue to see Tesla rise significantly higher with the passing of each a day decide to pile into the stock to catch some quick gains.

Regardless of the reason, the rally has been nothing short of amazing and continues to dominate media headlines.

Despite the sideways price action, Bitcoin continues to rack up the small victories and on Feb. 3, the asset’s estimated U.S. dollar transaction value reached $3.5 billion, a high not seen since the metric reached $4.1 billion on July 28, 2019. 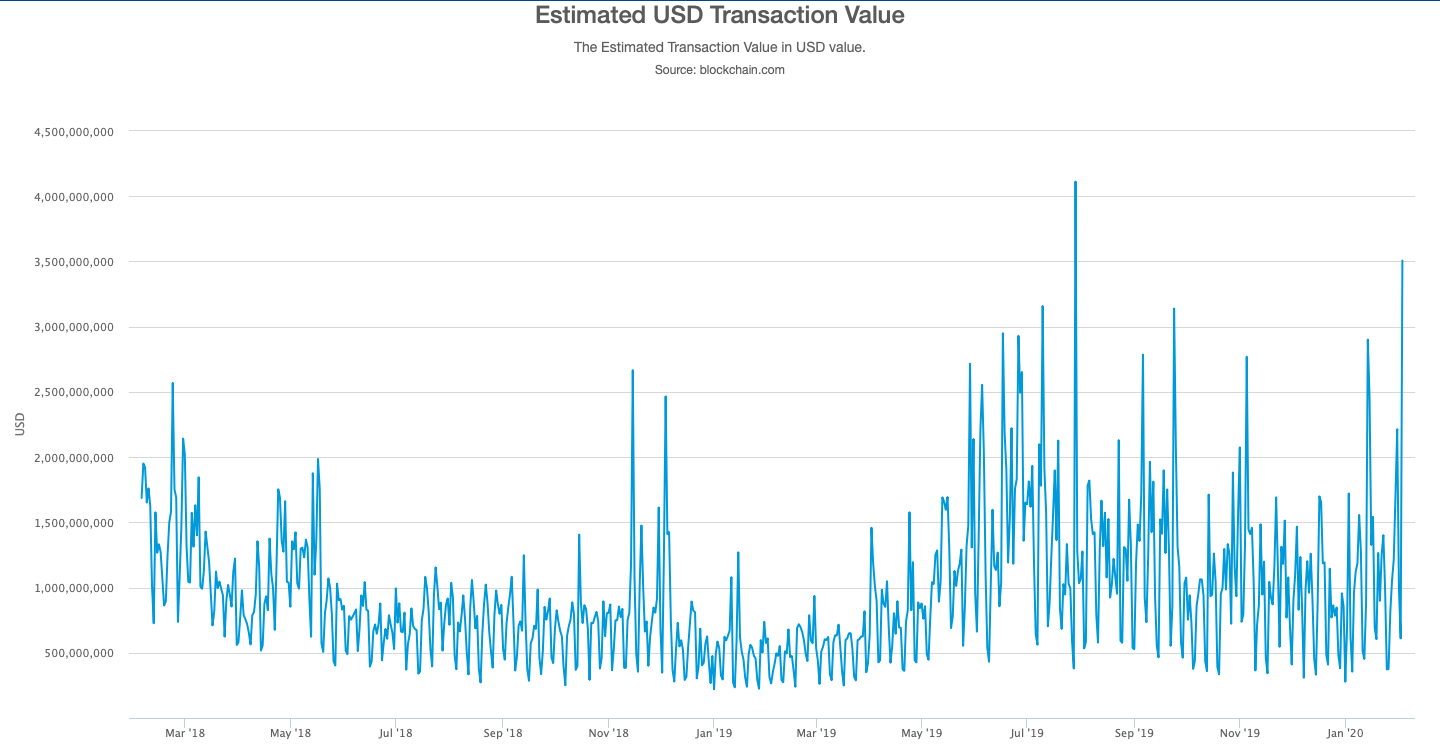 The impressive figure occurred as the price reached $9,622 on Monday but since then Bitcoin has pulled back 5.3% to trade at $9,200. After last week’s 16% rally a period of consolidation is warranted.

Cointelegraph Markets’ contributor Michaël van de Poppe recently tweeted the above chart and explained that the current price action, “Looks like some natural and healthy consolidation. Even if we reach $8,550-$8,600, that would be healthy too.”

At the time of writing, Bitcoin price has recovered to the $9,200 support, a point where the price bounced 5 times over the past week. On the daily timeframe the RSI has pulled back from overbought territory, there is a bear cross on the moving average convergence divergence (MACD) and the MACD histogram has printed a red bar as buying slows down and the asset shows a decrease in momentum.

If the $9,200 support gives way, traders will look for the price to drop to the 200-day moving average which is also aligned with the ascending trendline at $8,866 and strong support at $8,775. 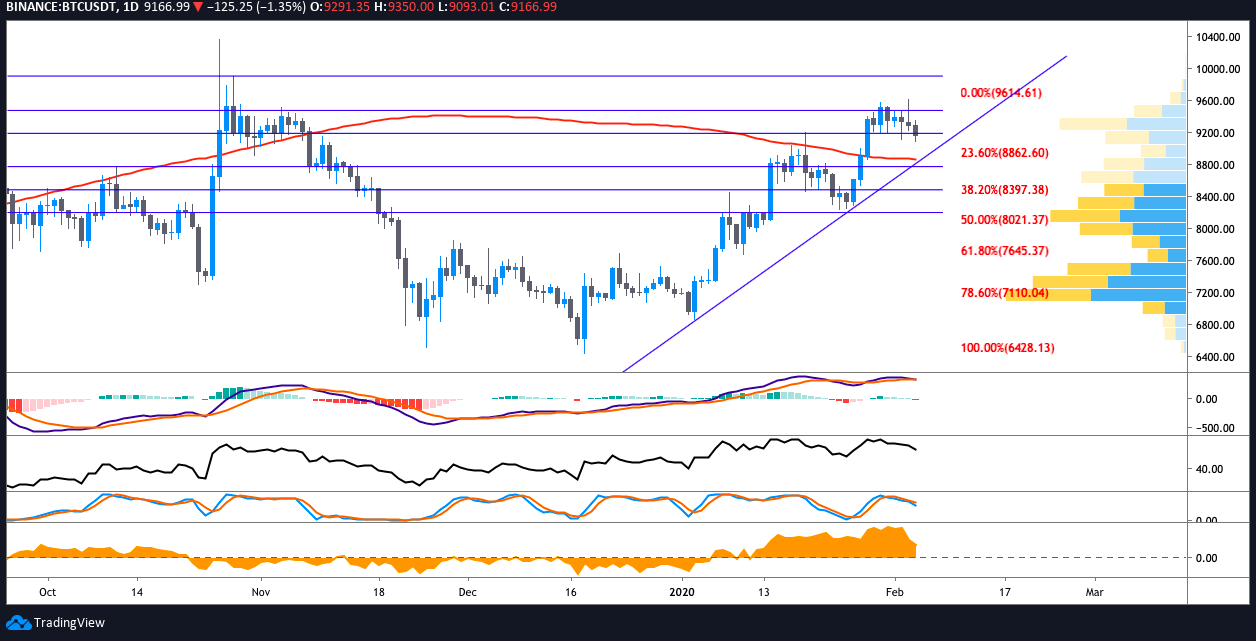 A drop below $8,775 would place the price below the ascending trendline and possibly bring the price to the $8,500 support. Below this, $8,200 would be the next point of interest and traders will note the high volume node of the volume profile visible range (VPVR) at this level.

The Bollinger Band indicator moving average is also positioned at $8,939, which is relatively close to the 200-DMA and the ascending channel trendline. Thus, traders’ first line of action may be to look for a bounce in the $8,950 to $8,800 zone, then play the underlying supports if the price breaks below the 200-DMA. 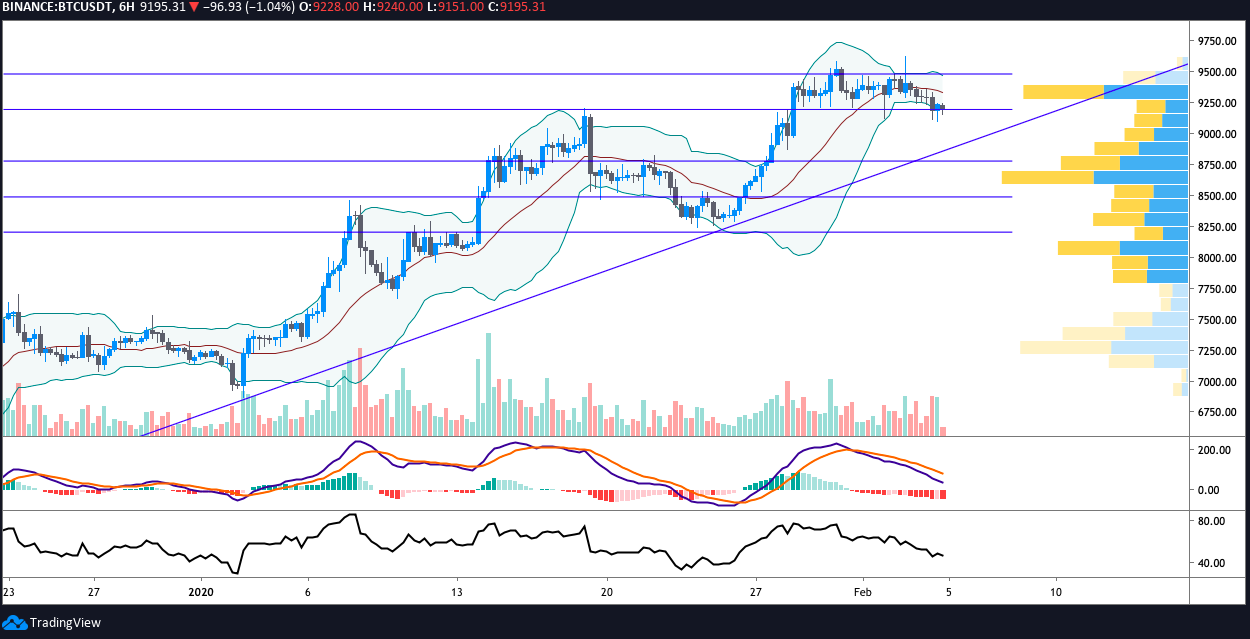 On the shorter timeframe, it’s clear that bulls are fighting to hold the $9,200 support but the RSI and MACD are both continuing their downward path. The price is riding along the bottom Bollinger Band arm, making lower highs and we can see a high volume VPVR node at $8,800 and $8,700.

It seems the most probable scenario would be to see the RSI continue to drop as bull volume dries up and traders look to exploit an oversold bounce in the zones listed above.