Tesla Stock Now Looks Exactly Like Bitcoin at $20K in 2017

Despite outperforming Bitcoin in January, $TSLA may be in line for a fall similar to what BTC/USD saw in late 2017.

Bitcoin (BTC) hit all-time highs of $20,000 in December 2017 before retracing — but another stock is now echoing its journey to an almost identical degree.

Placing BTC/USD from that year over Tesla stocks from 2019, the extent of the two assets’ correlation becomes immediately clear. Bitcoin took almost exactly as long to go from $1,000 to $20,000 as Tesla did to reach its current peak of $780. 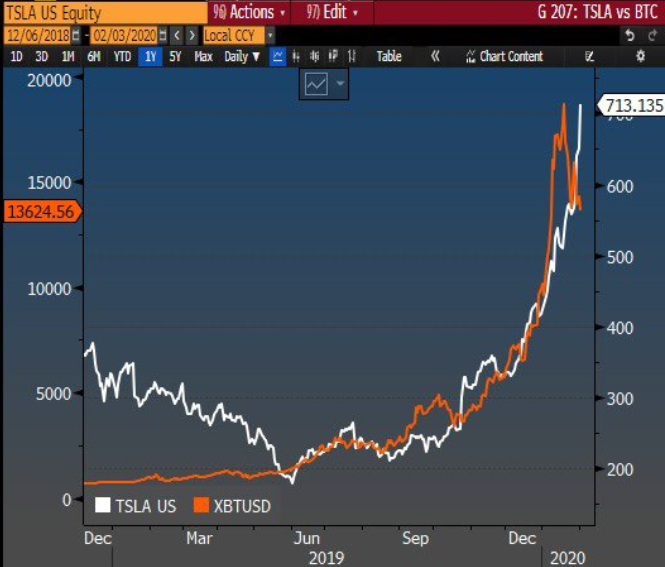 Tesla stock in 2019 versus Bitcoin in 2017. Source: Mike Novogratz/ Twitter

As Cointelegraph reported, the company managed to outdo Bitcoin’s impressive 35% gains in January, topping 40% in an unanticipated wave of enthusiasm.

Nonetheless, some commentators are already wary that the good times for $TSLA are coming to an end.

Purchasing the stock at current levels reminded Cointelegraph Markets analyst Scott Melker of buying into Bitcoin at the top.

“It is incredible to see this visually on a chart,” he wrote on Twitter reposting Novogratz’s findings.

“Tesla at its current price is effectively the same as Bitcoin at its all-time high in 2017.”

Since then, gains have been more measured and sustained, BTC/USD conforming to long-term predictions which nonetheless call for a giant $100,000 per coin by 2022.