Data provided exclusively to Cointelegraph by blockchain and crypto analytics firm Flipside Crypto shows that Binance and OKEx paid large fees for Ether (ETH) withdrawals when the Bitcoin price crashed to $3,600 on March 13, a day dubbed as “Black Thursday” among investors in the cryptocurrency market.

At the time, the Bitcoin (BTC) price dropped by around 50 percent in a single day, causing the price of Ether to plunge to as low as $85 across major exchanges.

As an unprecedented cascade of liquidations pushed the entire market downward in a short period of time, requests for withdrawals on exchanges also surged as investors began to demonstrate a high level of fear.

Amidst all the panic, Binance and OKEx, two of the largest crypto exchanges paid, higher than the average price of "gas"—a term used to describe fees paid on the Ethereum blockchain network to transfer data or payments—to seamlessly process user withdrawals.

As shown in the Flipside Crypto chart exclusively shared with Cointelegrah, the amount of gas paid on the Ethereum network by Binance, Coinbase, OKEx, Kucoin, and Kraken indicates that Binance and OKEx paid up to 400 percent higher fees to ensure withdrawal transactions are included in the following block. 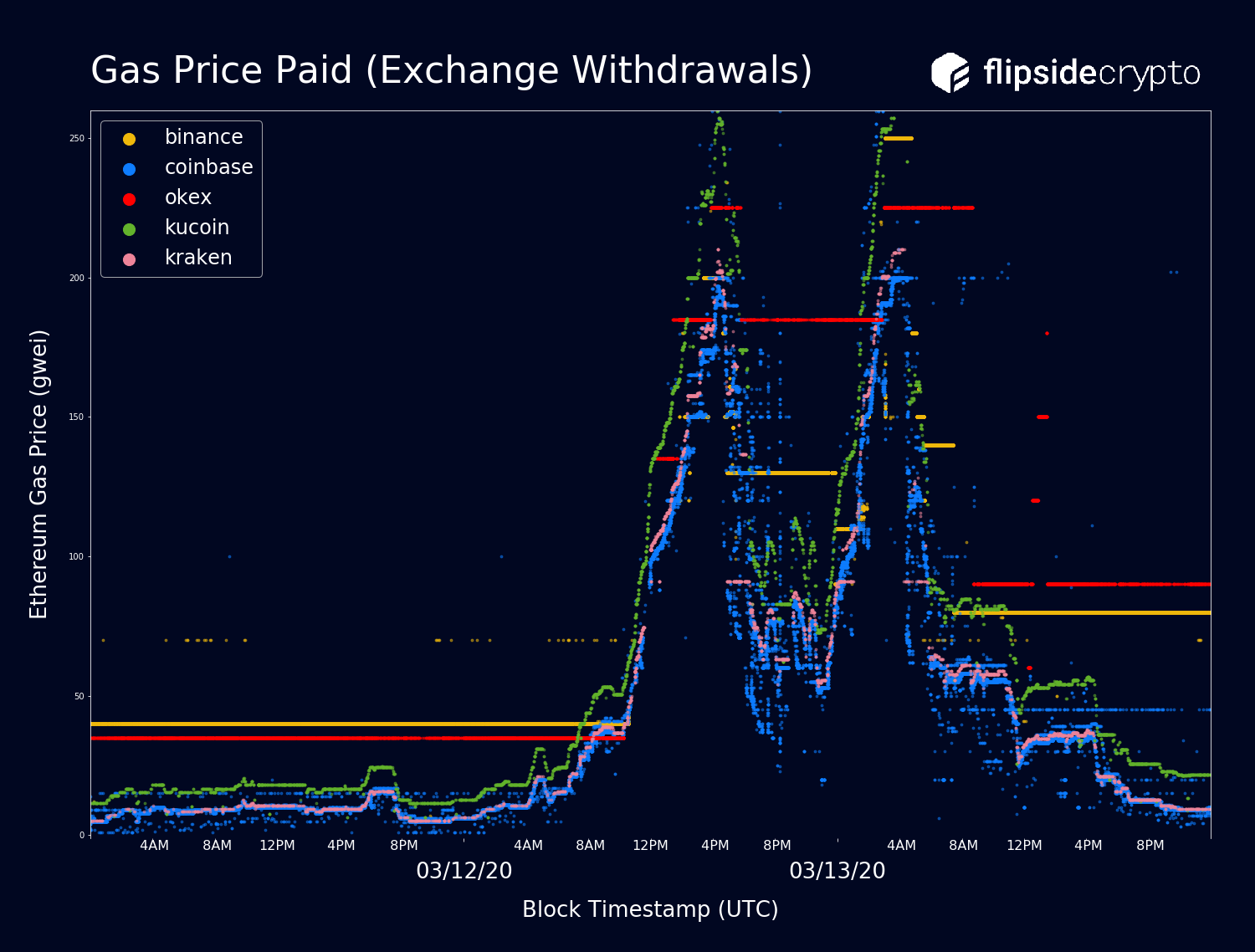 “Binance and OKEx appear to be paying a constant rate significantly above the prevailing market price, as evidenced by the yellow and red parallel lines on the graph. This ensures that their transactions have the best chance of being included in the next block. When the price of gas spiked, around 8AM UTC on March 12th, they both had to compute a new threshold for their transactions to go through.”

Most exchanges have a fixed fee rate for trading, deposits, and withdrawals. Since a significant spike in on-chain activity on major blockchain networks like Ethereum and Bitcoin rarely occurs, exchanges typically maintain a stable withdrawal cost over a prolonged period of time.

As an example, on Binance, the standard fee for Ether withdrawals is 0.003 ETH, which is equivalent to around $0.57.

Apart from blockchain network fees, withdrawal fees on exchanges also cover a variety of operations on the exchange side such as costs involved in security, maintenance, and automated audits.

When an exchange pays an unusually high fee to process a withdrawal, it decreases the amount of revenue the exchange obtains from it to finance all of its other operations that are needed to settle withdrawal requests.

Not every crypto exchange paid the way for users

Coinbase and Kraken, however, appeared to be actively predicting gas costs in real time and adjusting fees based on changes of user activity on the Ethereum network.

According to Flipside Crypto data scientist Will Price, this may have led users to wait a few blocks until their withdrawals were fully processed, potentially causing some delay. Price said:

"Coinbase and Kraken appear to be continuously monitoring the network and updating their gas prices accordingly, as seen in the blue and pink lines on our graph. If these predictions turn out to be inaccurate, then users may have to wait a few extra blocks for their transactions to be processed. These few extra seconds could make a big difference for users attempting to arbitrage prices across exchanges."

Whether exchanges would have to pay high fees following the launch of ETH 2.0 and the anticipated transition from the proof-of-work (PoW) to proof-of-stake (PoS) consensus algorithm remains to be seen.

Upon the shift, fees on the Ethereum network are expected to drop substantially from current levels. This means the next time congestion builds up on the network, exchanges may not have to cover the fees on behalf of their users.