All Inflation? In Bitcoin Terms, Stocks Never Recovered From COVID-19

Bitcoin and gold denominated stock market performance wipes out almost any hint of recovery since March.

Charts showing stocks denominated in gold and Bitcoin in 2020 show that far from having their best quarter in ten years, markets had no “recovery” at all.

The perspective is starkly different to the message coming from governments and mainstream media about the health of the economy.

Central bank intervention, they claim, helped boost stocks to clinch their strongest quarterly growth since 2011 in Q2. But when viewed in BTC, however, Q2 gains from the March crash are simply a modest bounce against a much longer, more serious downtrend.

In January, the S&P 500 traded at around 0.45 BTC, with this decreasing until mid-March when a sudden spike to 0.5 BTC occurred. Thereafter, a drop below 0.3 BTC in May spelled the end of any real U-turn, with current levels circling 0.33 BTC. 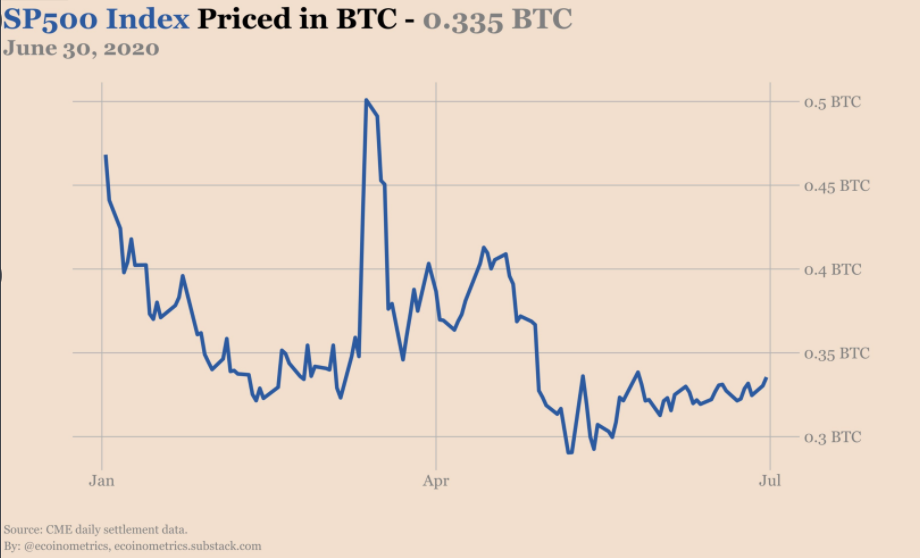 The same is true for crude oil. Denominated in BTC, its recovery to 433,000 satoshis at press time from lows of 150,000 satoshis in April pales in comparison to its January price of 900,000 satoshis.

Commenting on stocks denominated in gold, meanwhile, Tuur Demeester, founding partner of Bitcoin alpha fund Adamant Capital, cast doubt on macro having seen any form of rescue at all.

“(In my opinion) there is no stock market recovery - it's all inflation,” he summarized.

It should be noted that, as Cointelegraph reported, the S&P 500 and Bitcoin remain closely correlated, and movements on the former noticeably impact the latter.

Demeester touches on a theme that has become increasingly pertinent in Bitcoin circles since Covid-19 responses took hold.

As noted this week, central banks’ economic policies worldwide have resulted in interest rate cuts and much cheaper money. At the same time, particularly in the case of the United States, central banks have commandeered macro markets.

The result has been a curiously strong performance against a backdrop of a huge spike in unemployment and more global debt than ever before.

As incorruptible hard money, Bitcoin represents an ever more appealing alternative, many argue.

This week, RT host Max Keiser gave perhaps the most vocal warning about the impact of rising inflation.

He told views of his Keiser Report show:

“The truth is if you want individual sovereignty, if you want justice, if you want uncensorable, unconfiscatable, indestructible wealth, there’s only one way to go — and that’s Bitcoin.”