Bill Gates, a world-famous businessman and philanthropist and Microsoft corporation principal founder stated in an AMA session on Reddit yesterday, Feb. 27, that cryptocurrencies led to deaths “in a fairly direct way.” And even though crypto investors have become victims of kidnapping and robbery, this still should not overshadow the true potential cryptocurrencies and the blockchain technology can bring to the society.

As our readers might have seen over the past few months, cryptocurrencies should be traded cautiously. If one makes the right decision and trades using the chart patterns, trades can be profitable with a calculated risk.

In our previous analysis, we had forecast Bitcoin to reach the resistance line of the descending channel at $11,500, after breaking out of the 50-day SMA. Today, the cryptocurrency reached an intraday high of $11,147.99. 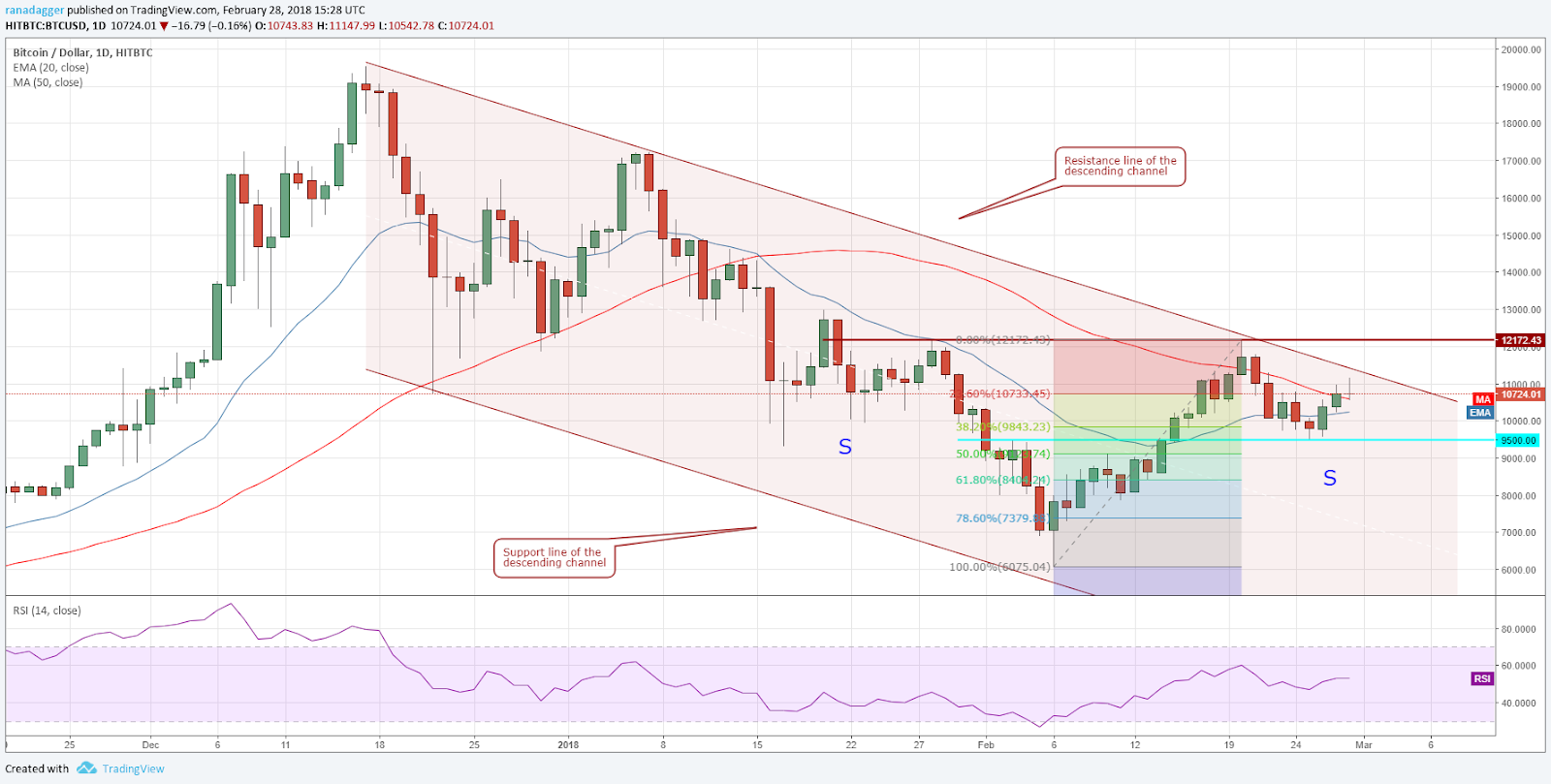 We believe that the zone between $11,400 and $12,200 will act as stiff resistance. Therefore, the aggressive traders should book profits on 50 percent of their positions at the current levels and hold the rest with a trailing stop loss.

A breakout of the $12,200 levels will complete an inverted head and shoulders pattern, which can propel the BTC/USD pair back towards the $18,000 levels.

The bears will gain strength once the digital currency breaks down of $9,400 levels. Until then, it is bulls advantage.

We had expected Ethereum to break out of the 20-day EMA and rally towards the resistance line of the descending channel. However, for the past two days, the bulls have failed to break out and settle at the moving average. If the ETH/USD pair turns down from the 20-day EMA and breaks below the trendline of the ascending triangle formation, it will be a bearish development. On the downside, $770 to $780 is likely to act as strong support.

Therefore, traders can raise their stops to breakeven on half position and keep the stops at $780 on the other half position. Let’s reduce our risk.

We still don’t find signs of a recovery for Bitcoin Cash. For the past six days, the price has been stuck in a tight range of $1,150 to $1,355. Both the 20-day EMA and the 50-day SMA are turning down, which shows that the bears have an upper hand. 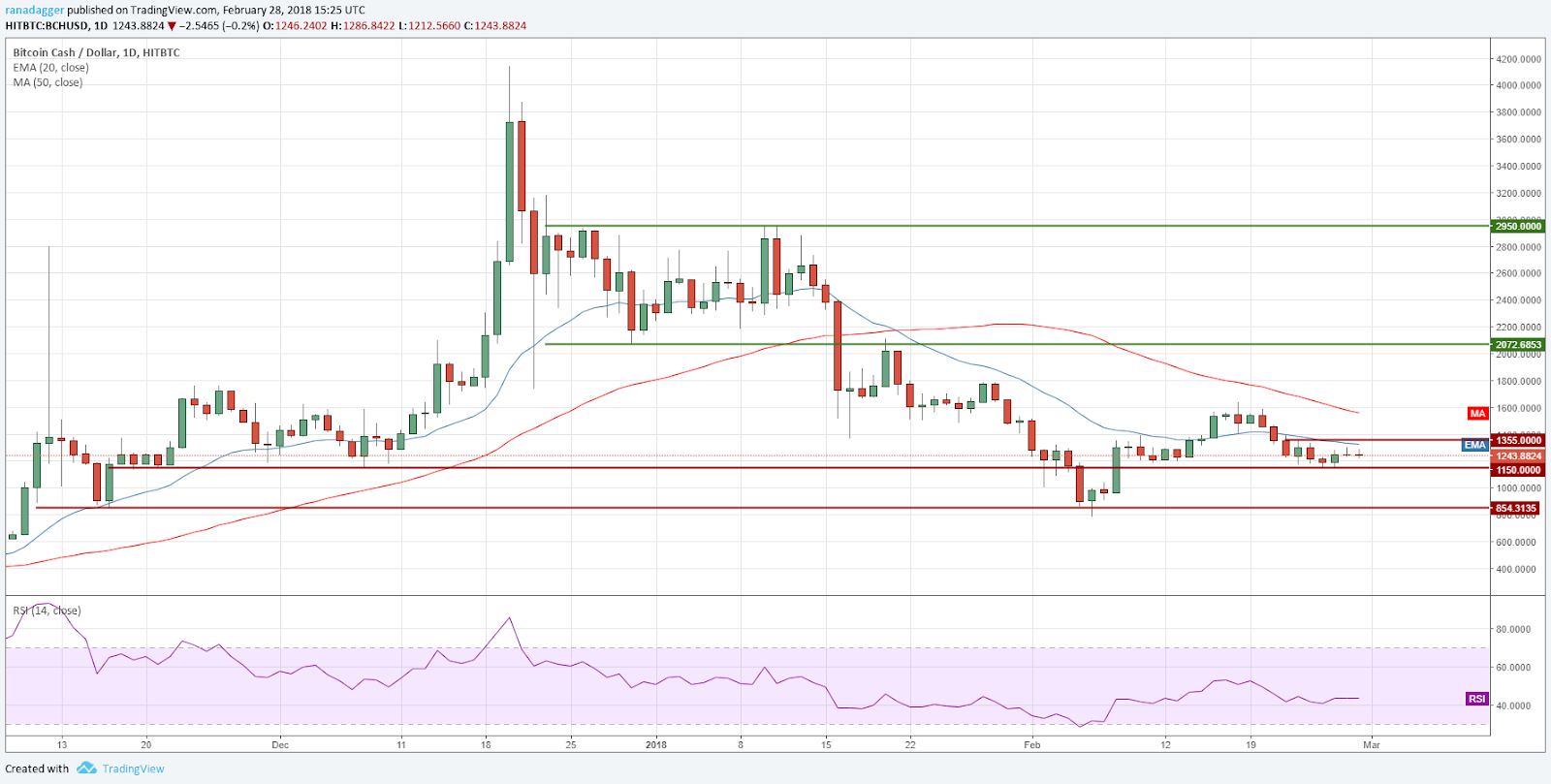 We are not sure whether the next move will be up or down. Therefore, we have provided both possibilities, and we do not recommend any trade on the BCH/USD pair at the moment.

We had forecast a range bound trading action in Ripple in our previous analysis and the price action supports our view. However, instead of trading in a large range, the cryptocurrency is stuck inside a very tight range, with resistance on the upside at $0.98669 and support on the downside at $0.85. If the bears break below this tight range, a fall to $0.72 is likely. If the bulls break out of the range, a move towards the 50-day SMA is likely. Until then, the XRP/USD pair is likely to remain range bound.

Stellar is struggling to move up. This shows lack of buying even at the current levels. When the price fails to bounce off strong support levels, it is a sign of weakness. 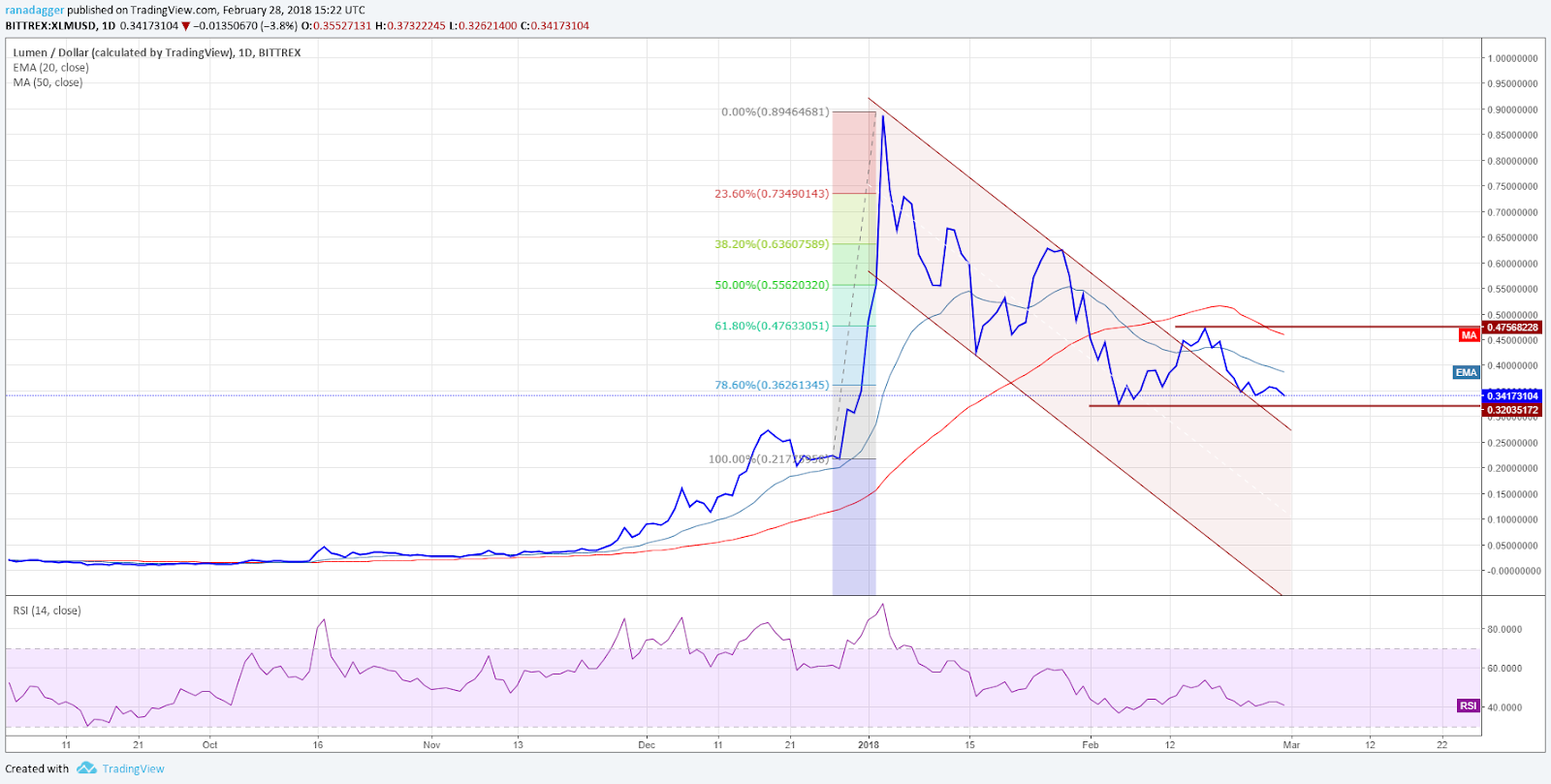 Both the moving averages have also turned down, which shows that the bears are in command. If the XLM/USD pair breaks down of the $0.32 support, a fall towards the $0.22 levels is likely.

On the upside, the bulls will face resistance at the 20-day EMA and the 50-day SMA. We remain neutral to bearish on the cryptocurrency as long as it trades below $0.48.

Litecoin went down from the overhead resistance of $240 on Feb. 26. Currently, it is trading close to the 20-day EMA, which should provide support. 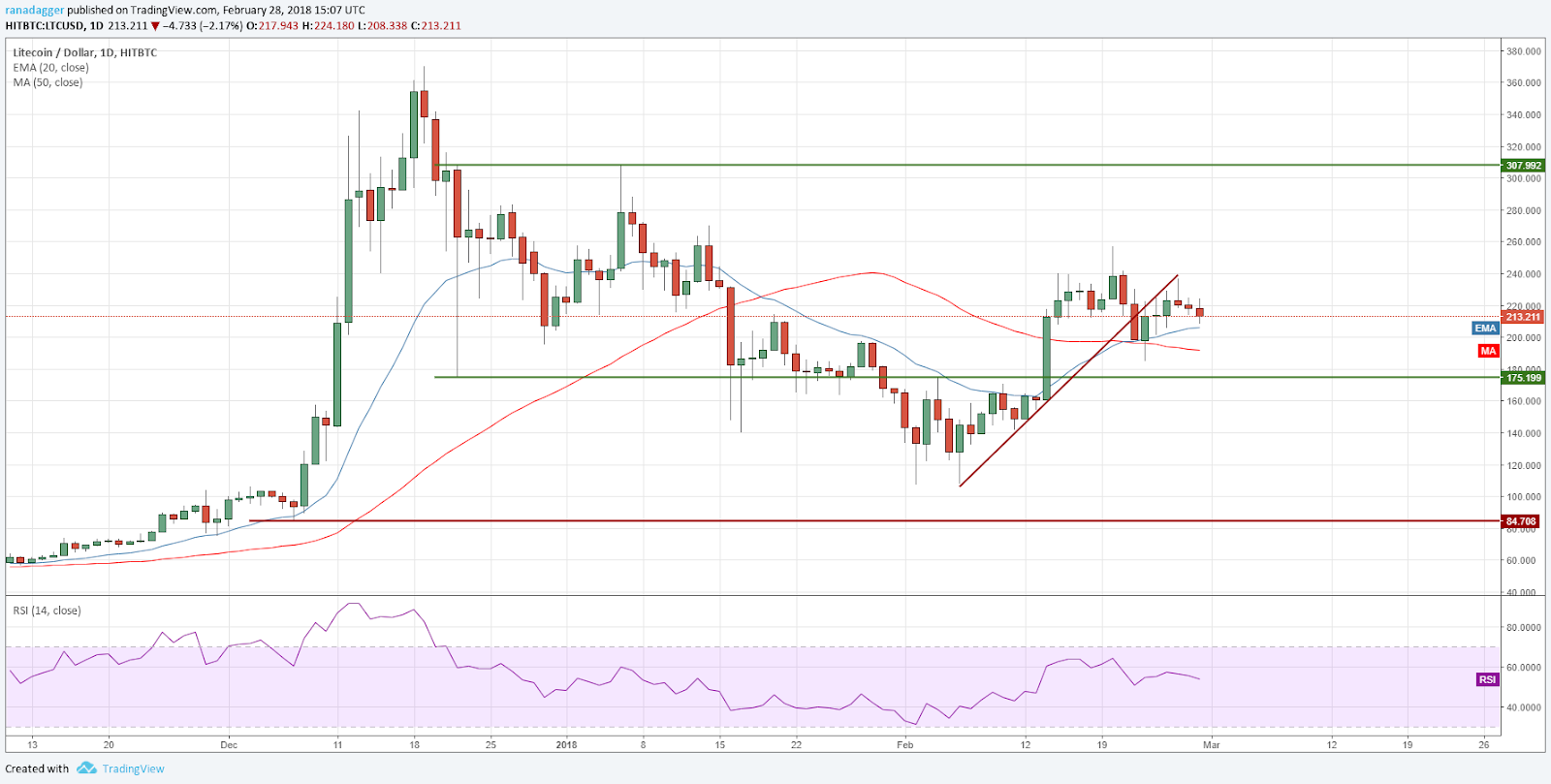 We like the LTC/USD pair because the moving averages have completed a bullish crossover and the 20-day EMA is above the 50-day SMA, which is a positive sign.

But if the cryptocurrency breaks down of the 20-day EMA, it can fall to the 50-day SMA. We shall retain our stop loss at breakeven because we don’t want to carry a risk when the overall sentiment is bearish.

We had suggested closing our aggressive long positions for Cardano in our previous analysis, and it turned out to be the right decision. 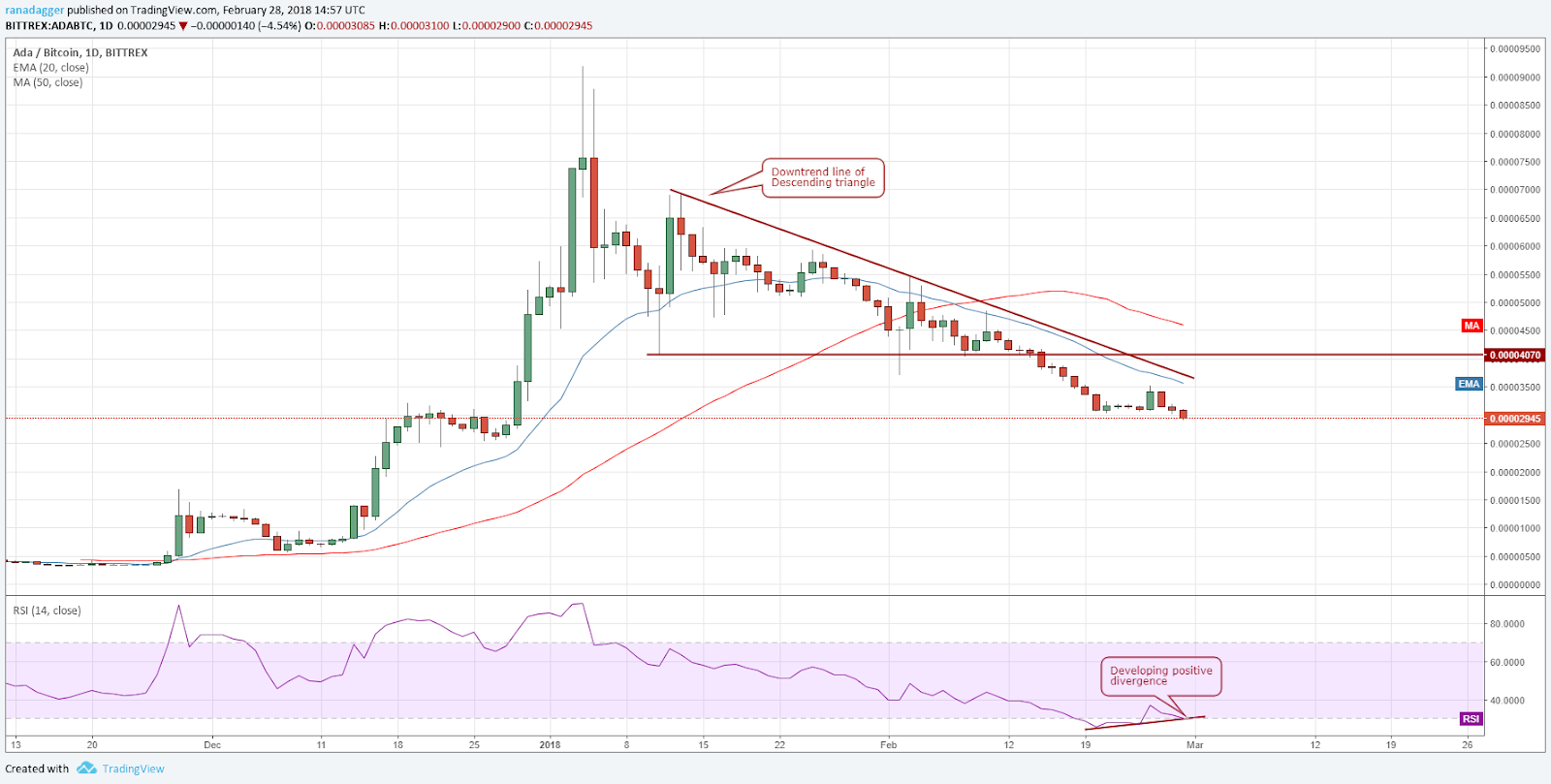 The only silver lining is that the RSI is showing signs of positive divergence. However, we shall not venture to buy it until the price climbs above the 20-day EMA and the downtrend line.

Traders who follow us are long on NEO at $126 levels, as recommended. Yesterday, Feb.27, the currency broke out of the critical overhead resistance at $140, but it did not sustain the breakout. We continue to put our trust in the NEO/USD pair because it has broken out of a bearish pattern and is sustaining above both the 20-day EMA and the 50-day SMA.

Our target objective on the upside remains a rally to $170. The stop loss can be retained at $105 for now. Traders can raise the stop loss to breakeven as soon as the cryptocurrency climbs above $150.

EOS broke out of the downtrend line yesterday, Feb. 27, but could not climb above the 20-day EMA. It has formed a symmetrical triangle. The next leg of the uptrend or downtrend will start once the price breaks out or breaks down of the triangle. On the other hand, a breakout of the symmetrical triangle will push the price towards $10.119 levels. We only should turn bullish on it after it sustains above the 50-day SMA.