An overnight push to nearly $8K means Bitcoin is adhering to the bullish comeback features pioneered in the Wyckoff Method, suggests a prominent analyst.

Bitcoin (BTC) may have just signaled its return to a bull market, according to fresh analysis using a century-old price prediction method.

In a tweet on Jan. 7, ex-Goldman Sachs analyst Murad Mahmudov channeled the work of Richard Wyckoff to suggest Bitcoin was in the process of a major recovery.

BTC/USD cracked resistance at $7,600 on Monday, surprising punters who considered the levels too difficult to pass under current conditions. At press time, the pair traded at $7,875, having reached $7,980 and gaining 5% on the day.

Wyckoff was the father of a whole new method of analyzing price performance, dubbed the Wyckoff Method. According to Mahmudov, who uploaded a chart to demonstrate Bitcoin’s position, the largest cryptocurrency has already put in a bottom.

Tuesday’s spike to near $8,000, for example, was an “SOS” point for BTC/USD in Wyckoff terms. SOS stands for “sign of strength,” and typically follows a so-called “spring” event which sees a price low point.

After the SOS, a slight retracement called a “back-up” should precede further gains, according to the model. 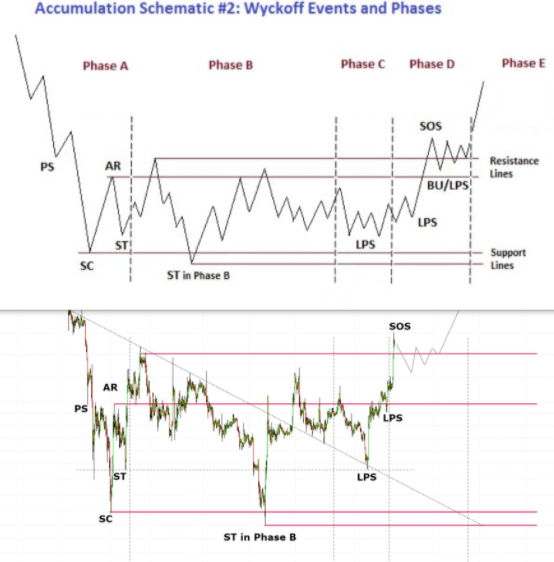 Mahmudov did not comment on the extent to which he personally believed in the validity of the bull scenario, which would reverse a general downtrend for Bitcoin that began in June after reaching nearly $14,000.

Following a late October bounce to $9,500, BTC/USD appeared to bottom out at $6,400 in mid-December, but not everyone is convinced that the floor has come and gone.

In the run-up to Bitcoin’s block reward halving in May, another historically accurate price model, Stock-to-Flow, calls for a price of around $8,300.

Mahmudov is well known for his highly optimistic views on where the Bitcoin price is heading. In August, he said accumulation — also the overarching term for Bitcoin’s current Wyckoff phase — was already happening.

“Don't try to outsmart yourself on short timeframes, zoom out & think big. In my view, BTC is going to $100K per orangecoin,” he summarized at the time.