Schiff, Rogers and Mark Cuban will end up “going all in” on Bitcoin, Keiser claims, while calling John McAfee the “king of scammers.”

Bitcoin (BTC) skeptics such as Peter Schiff and Mark Cuban will all buy “huge” amounts of the cryptocurrency, Max Keiser promises.

In a tweet on June 26, the famously outspoken RT host said that he “100% guarantees” that some of Bitcoin’s biggest naysayers will ultimately flip bullish.

Gold bug Schiff, Cuban, and investor Jim Rogers will at some point fly the flag for Bitcoin instead of any alternative.

“When they finally understand it, they’ll go all-in with huge buys. I 100% guarantee this to be the case.”

A further tweet and survey predicted that for Schiff to come on board, BTC/USD would need to trade at $50,000 at the most. Keiser wrote:

“The longer @PeterSchiff waits to buy #Bitcoin, the bigger the panic-buy. My guess, $50,000 triggers him. What price do you think triggers Schiff to panic-buy Bitcoin?” 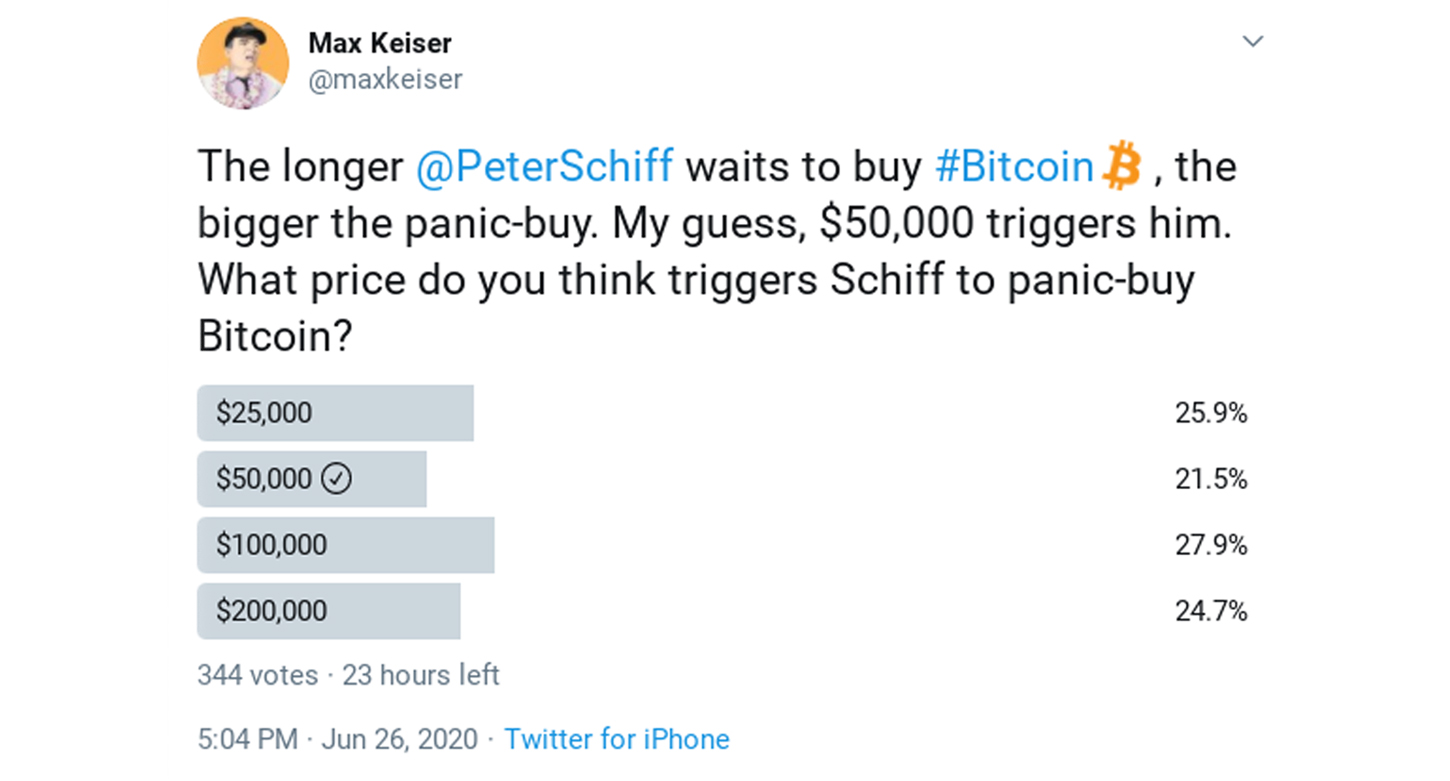 The curious prediction comes days after Rogers told the mainstream media that governments will have to destroy Bitcoin.

“I believe that the virtual currency represented by bitcoin will decline and eventually become zero,” he told Japanese outlet Aera Dot.

Keiser, McAfee and the “King of Scammers”

Despite his pledge, meanwhile, Keiser may not be wholly sincere. Friday’s Twitter activity saw him label John McAfee the “king of scammers” and call McAfee’s wife a “Karen.”

“Example of someone who’s *not* a #Bitcoin influencer: John McAfee,” part of another post reads.

“He came to BTC late (was already past $2,000) And after initial, splashy outrageousness - proceeded to wipe out Bitcoiners globally with his extremely dodgy ‘coin of the day’ scam.”

Both McAfees retaliated, with Keiser remaining silent at press time. In an interview with Cointelegraph last week, however, he was as vocal as ever, forecasting that fellow investment magnate Paul Tudor Jones would own more Bitcoin than anyone else by 2022.

Later, on a recent episode of his Keiser Report TV show, he appealed to Americans to buy Bitcoin instead of protesting to effect social change. Protesting, Keiser argued, “does nothing.”