Even $AMZN performance in the 2010s keeps it firmly in line with traditional investments, while Bitcoin outperforms by an order of magnitude.

Bitcoin’s (BTC) risk-return is a “different beast” compared to even the darling of the stock market of the 2000s, Amazon.

That was the conclusion drawn by one of the cryptocurrency industry’s best-known analysts and the creator of a uniquely accurate Bitcoin price model.

Amazon’s significant losses in the year 2000, combined with its revered recovery ever since still keeps it far below Bitcoin’s risk-reward ratio.

“Bitcoin… is a different beast!” PlanB summarized, describing Amazon’s position on the chart as “much closer to normal.”

Amazon’s share price appeared to shake off revelations involving Saudi Arabia allegedly hacking CEO Jeff Bezos this week. Both $AMZN and BTC nonetheless fell over the past seven days, with the latter potentially reacting to uncertainty stemming from China. 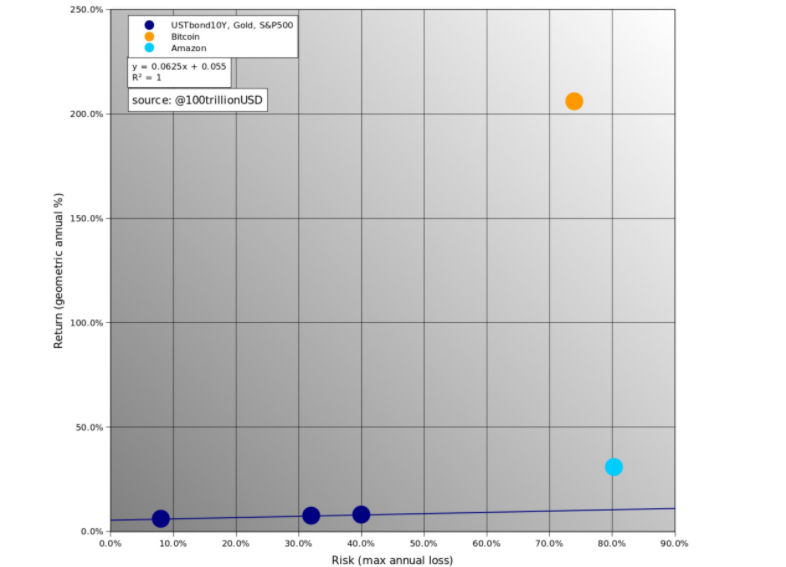 The impressive contrast comes days after Cointelegraph reported on Bitcoin’s risk-adjusted returns outperforming every major investment offering based on a four-year investment.

Then, PlanB appeared to hint that four-year periods — the time between each reduction in the new Bitcoin supply — could continue to boost performance.

Further, cryptographer Nick Szabo added, the susceptibility of traditional instruments to react to government and central bank meddling in currency markets meant Bitcoin was a natural fit for long-term, or low-time preference, investors.

PlanB’s price model, stock-to-flow, has correctly called much of Bitcoin’s historical behavior and continues to forecast a level of $100,000 for BTC/USD in 2021.

At current levels, markets continue to conform to stock-to-flow, at $8,300 trading just below its suggested range. Before the next halving in May, $8,300 is, in fact, the average price the model says Bitcoin will trade at before moving significantly higher.