Bitfinex gains praise from whales, while a volatility warning hits BitMEX after its futures market produced a one-minute surge of $450 on April 4.

Bitcoin (BTC) saw a “flippening” during its price crash to $3,700 last month — something that could reveal a new uncomfortable truth about exchanges.

On March 12, as Bitcoin prices collapsed in a matter of hours, it was notably one platform in particular which provided more volume, and hence liquidity, for traders.

“Despite Binance and OKEx trading the most volume across all markets in broad terms, during the exact moment of the BTC crash (approx. 10:30 am GMT) which began on the 12th, it was Bitfinex that represented the majority of Top-Tier exchange trading volume (across BTC/USD and BTC/USDT markets),” the review states.

“This was followed by Coinbase, OKEx and Bitstamp who also maintained high volumes during this time.” 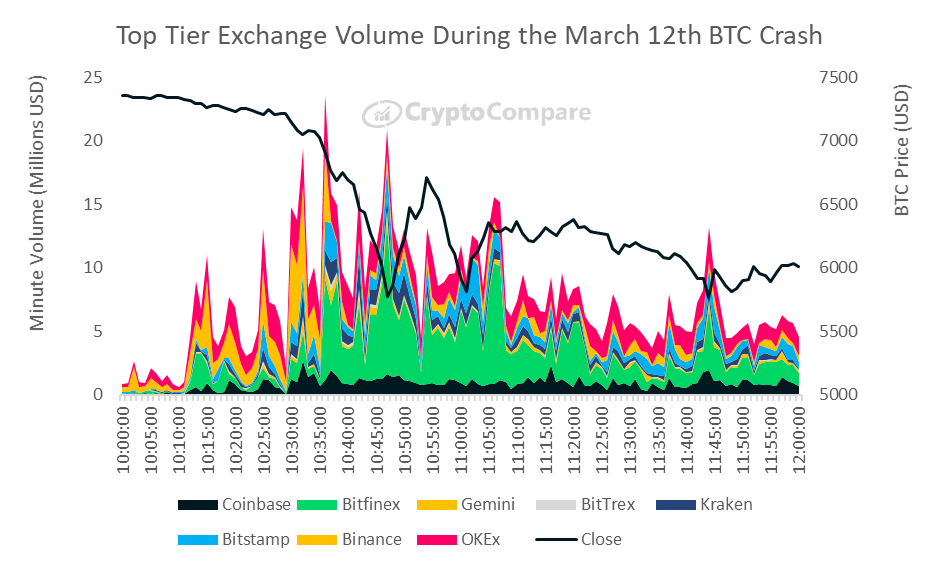 According to CryptoCompare, the first hour of the precipitous crash saw Bitfinex provide the most volume.

Among top-tier exchanges excluding Coinbase, OKEx and Bitstamp, “between 10:40 am and 11 am, it represented 40% of volume on average among these exchanges,” the report continued.

During the brief period, Bitfinex was handling up to $11.8 million worth of trades per minute.

Reacting to the findings, online commentators were quick to point out that more “mainstream” exchanges with ubiquitous branding were unable to compete with the more modest Bitfinex in terms of liquidity.

Among them was the Twitter user J0e007, a notorious high-volume Bitcoin trader who regularly tops the list of highest-grossing Bitfinex accounts.

“When shit hits the fan, you know where you can get real liquidity,” he wrote in a post on Saturday.

“It's definitely not on those faketown exchanges with such great marketing headed by popular figureheads.”

CryptoCompare also noted that March 13 saw the highest volumes in history on cryptocurrency markets, with $75.9 billion in a single day.

Derivatives giant BitMEX continues to field criticism over its potential role in the crash, despite executives denying that the platform’s technical problems were to blame.

On Saturday, fellow high-volume trader Hsaka warned of unpredictable volatility on BitMEX’s futures markets, after a spike of $450 during trading, which lasted just one minute.