Blockchain and the City: New York State as a “Tough” Model of Crypto Regulation

The financial capital of the world can afford to be picky — but does it stifle fintech innovation?

Recently the New York Department of Financial Services (NYDFS) granted statewide virtual currency licenses to two applicants: stock trading service Robinhood and cryptocurrency ATM operator LibertyX. The state’s regulatory regime, commonly known as BitLicense, imposes a set of strict disclosure and consumer-protection requirements on any business that offers cryptocurrency-related services to New York residents. Since the framework was introduced in 2015, only a handful of companies had their applications approved by the NYDFS: The elite club of BitLicense holders now counts just 16 entities, the two newcomers included.

The state has also demonstrated that it keeps close tabs on those who might be in violation of the compliance procedures: In September last year, the New York state attorney general's office published a report that raised concerns over price manipulations that were possibly taking place on cryptocurrency exchanges, and referred three of them to the state’s financial regulator.

While many American states strive to appeal to crypto businesses by implementing lenient policies and easing red-tape pressures on industry startups, New York has championed a regulatory approach more rigorous than that of most nation-states. Many influential figures in crypto community are cross with what they perceive as a vast governmental overreach, yet there seems to be no shortage of firms still ready to take on the pains of obtaining the license. But in the big picture, is this type of regulatory climate that exists in the world’s financial capital beneficial for the crypto industry, mainstream adoption and the Empire State itself? 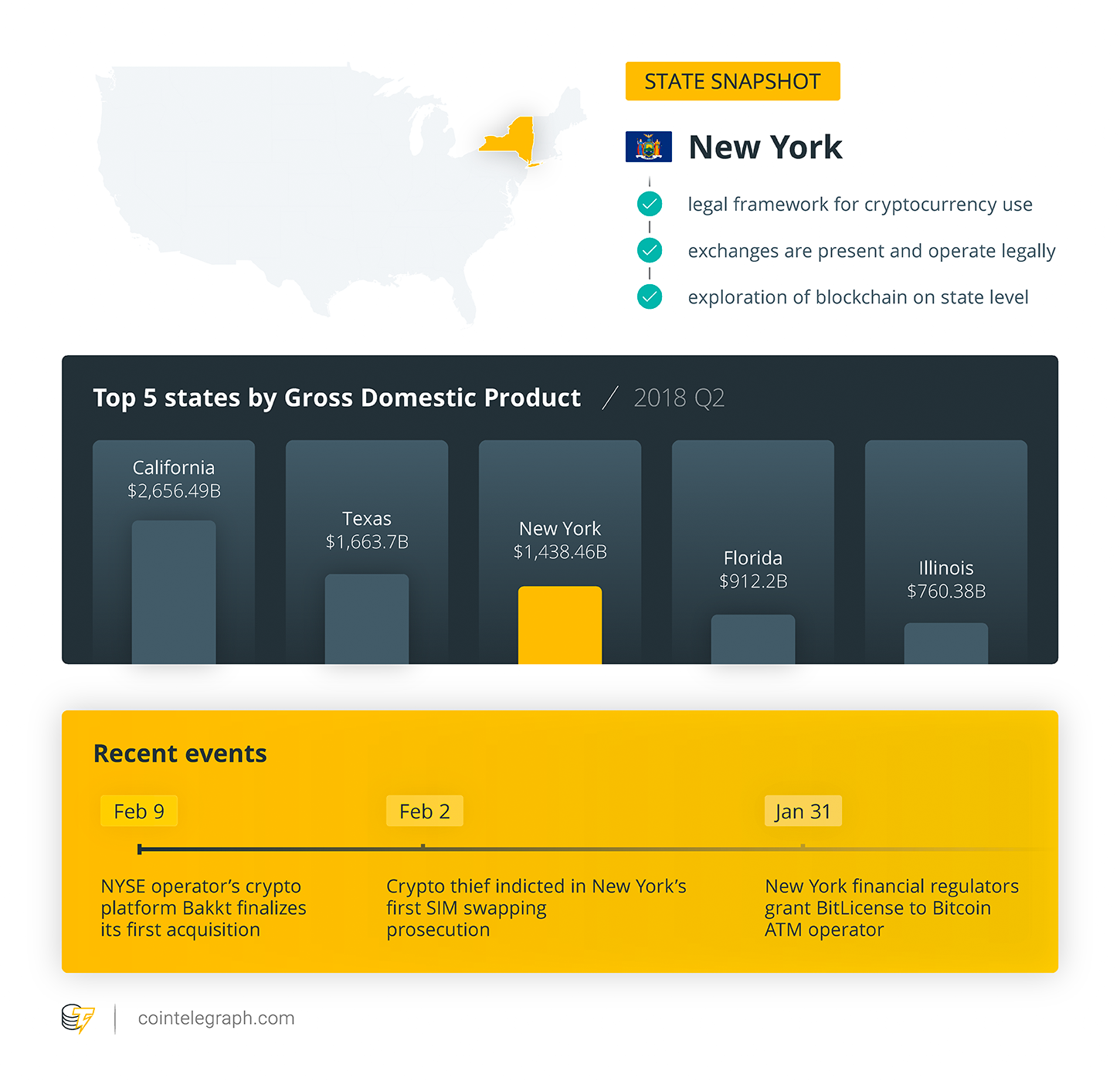 For any company somehow related to finance, the benefits of doing business in New York and with New York residents are obvious. The number of powerful financial institutions per square foot is staggering, the Wall Street money is just a glance away, and a consumer market of almost 20 million people is no small deal, either. This is especially true if you are a prominent player in the nascent fintech industry longing for mainstream adoption.

New York legislators in Albany are well aware of their jurisdiction’s unique position as a major financial hub, and have been long acting accordingly. Martin Weiss, founder of Weiss Research and Weiss Cryptocurrency Ratings, explained that the tendency for strict state-level regulation has a long history:

“Traditionally, Albany has been tougher than many other states in regulating — insurance, for example. They are the toughest state in regulating financial markets, too. They see themselves responsible for keeping the financial center.”

In the case of crypto, Weiss argued, New York’s centrality to the world’s financial system is a powerful enough factor to overcome the logic of crypto regulation applicable to almost any other territory:

“Cryptocurrencies are, in essence, borderless. Regulation, in order to catch up, would also have to be borderless, crossing not only state boundaries but also national boundaries. New York is in a unique situation because it regulates a major financial center, the largest in the world. So as long as all those corporations want to remain domiciled in New York, legislators in Albany do have a jurisdictional reach that sticks. In most places in the world, if you try to regulate cryptocurrencies, they’ll just move to another jurisdiction. That is bound to happen with most of cryptocurrency institutions. But that’s not the case with New York.”

Vigilant New York state authorities became concerned with Bitcoin regulation fairly early: Ben Lawsky, the state’s Superintendent of Financial Services, first sketched the contours of what would become BitLicense in July 2014. Regulations came into full effect almost a year after, forcing both existing and incoming players to either comply or quit.

Hardly surprisingly, not everyone took the news well. During the summer of 2015, big names such as BitFinex and ShapeShift pulled out of the New York market; crypto exchange Kraken announced cessation of services to New York residents in a blog post that called BitLicense “a creature so foul, so cruel that not even Kraken possesses the courage or strength to face its nasty, big, pointy teeth.” Erik Voorhees and Jesse Powell, the bosses of ShapeShift and Kraken, respectively, remained BitLicense’s staunch critics, calling for the regulation’s repeal ever since.

Aside from decrying the redundancy of regulation, opponents often point out how the pace at which licenses get approved is dismally slow — it is not uncommon for a company to wait for three years to be approved, as it happened with Genesis Global Trading. This part of the process alone can put smaller companies at a disadvantage. As Kevin Hobbs, CEO of the blockchain consultancy Vanbex Group, told Cointelegraph:

“We believe that these strict regulations hinders cryptocurrency innovation in the Empire State. BitLicense is particularly restrictive for small companies to bear. Since only the largest companies possessing ample resources able to comply with the strict regulations. The BitLicense became effective in New York on June 24, 2015 but in the three years since then, only five crypto-related companies have been approved for a BitLicense in the state. Indeed, these one-size-fits-all regulations ultimately stifles innovation.”

Pushback from the more regulation-averse flank of crypto community has also received some political support: Larry Sharpe, a Libertarian Party candidate in the 2018 New York gubernatorial election, argued that the BitLicense regime serves to entrench the incumbent’s dominance in the market, and proposed to eliminate the licensing process. His bid in the November 2018 election, however, was unsuccessful.

Maybe it’s not that bad?

Those who are on board with the New York authorities’ rigorous policies toward cryptocurrency usually speak in the language of benefits to institutional and mainstream adoption. The idea is that the robust, large-scale crypto enterprises that prove capable of complying with the licensing requirements could draw the whole ecosystem closer to the core of the incumbent financial system that New York embodies. Robinhood, the recent addition to the pool of BitLicense holders, could definitely play this role. As Sky Guo, CEO of smart contract platform Cypherium, put it:

“A great part of Robinhood’s value to our space will be as a leader in quasi-institutional compliance. New York is the center of traditional finance, and the state's licensing process — for good reason — prioritizes the integrity of its complex systems. For these reasons, Robinhood will be a great bridge between the two communities. Because Robinhood aims to open public access to traditional finance mechanisms, the company has a natural affinity for crypto projects and the DLT space in general.”

In addition to institutional-level shifts, Robinhood is poised to help the cause by adding a share of its regular stock users to the ranks of crypto community, notes Eric Ervin, CEO of Blockforce Capital:

“Long-time cryptocurrency believers may not be migrating over to the Robinhood crypto platform anytime soon due to its lack of certain features that are available on other crypto trading platforms. However, the increased trust instilled by the issuance of the BitLicense may be enough to convince current Robinhood users who are on the fence to give the service a try. Robinhood’s significant user base in the state of New York will open the door to new crypto investors.”

Finally, there are signs that the Empire State’s regulatory framework is evolving into something more flexible and dynamic. More companies have seen their applications for a crypto license approved in the last year than in the previous three.  A seemingly lighter version of the approval process is now applied to companies seeking permission to offer crypto custody. According to reports from inside the state legislature, a task force is being assembled to focus entirely on digital currency.

“We think that New York regulators are making a genuine effort to make the state competitive for the blockchain era. BitLicenses have been approved on a more regular basis recently. NYDFS have issued several novel approvals for crypto custody. They also have put together a very clear Q&A on their website that provides a coherent framework for companies to buy, sell, hold, and transmit cryptoassets in a compliant manner.

“A lot of us think that the financial services industry will run on a blockchain. If this assumption turns out to be true then New York, being the financial capital of the world, has a vested interest in making sure it remains as such in decades to come.”

New York has gravitated toward a tight regulatory model that, at least according to the majority of state representatives, fits its status of the global financial center the best. In the years to follow, this model will enter a competition with alternative conceptions of how to do it. Martin Weiss hopes that this competition will ultimately yield a uniform, globally enforced regulation:

“What you’ll find is various jurisdictions experimenting with regulation: Malta, UK, Russia, Belarus — some taking a much more liberal attitude, some taking stricter attitudes — and over time, the model that works the best will become the predominant model globally. We’ll hopefully see a global regulatory regime enforced by supranational organizations like the IMF [International Monetary Fund] or the BIS [Bank for International Settlements] or something like that. New York is establishing a tough model.”