The International Monetary Fund claimed that the growth of blockchain in Malta has created major risks of money laundering.

Last week, the International Monetary Fund (IMF) claimed that the growth of blockchain in Malta has created major risks of money laundering and terrorism financing in the island’s economy, as per the local media.

Malta is renowned for its crypto-friendly politics, whose efforts in the field have earned it the moniker of “blockchain island.” However, its push for becoming the international crypto hub has attracted criticism from both global watchdogs and local opposition. 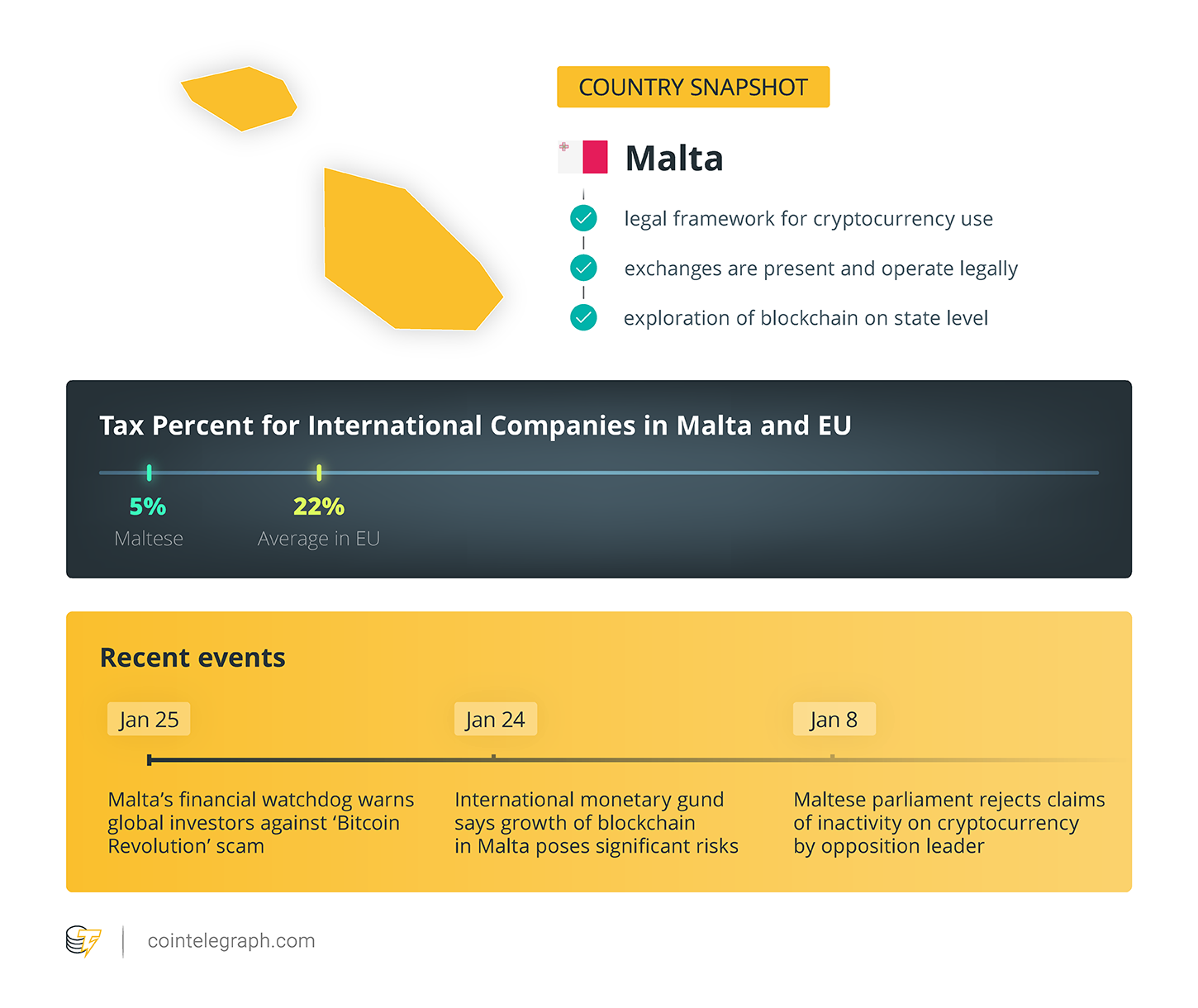 On Jan. 24, the Times of Malta reported on preliminary findings that the IMF allegedly presented after visiting the island. The international organization highlighted blockchain — alongside remote gaming sectors and the government’s citizenship-by-investment scheme — as being high on their list of concerns regarding possible Anti-Money Laundering (AML) compliance violations.

Indeed, blockchain has remained one of top priorities for the Maltese government since July 2018, when it approved three blockchain- and crypto-related bills, aiming to establish a strong and transparent crypto regulatory climate: namely, the Digital Innovation Authority Act, the Innovative Technological Arrangement and Services Act, and the Virtual Financial Asset (VFA) Act.

Announcing the changes via Twitter, Silvio Schembri, the junior minister for financial services, digital economy and innovation within the Office of the Prime Minister of Malta, claimed that the country became “the first world jurisdiction to provide legal certainty to this space.”

The 3 Bills that will regulate DLT have been approved by Parliament and enacted into law. Malta , the first world jurisdiction to provide legal certainty to this space. #blockchainisland @JosephMuscat_JM

Indeed, throughout 2018, a significant number of foreign crypto players who faced regulatory difficulties back home — including cryptocurrency exchanges OKex, Binance and BitBay — set up their operations in Malta due to the development of a friendlier crypto space. Additionally, Malta has the lowest corporate tax percent for international companies in the European Union — set at just 5 percent, comparing to the average of 22 percent — which appears to be an attractive factor for such relocation as well. Given that such legislation is scarcely present in other countries, where crypto is either not regulated or prohibited altogether, Malta indeed might seem like a logical destination.

“What we really love about Malta is it provides a balanced and robust regulatory framework.”

In September 2018, the prime minister of Malta, Joseph Muscat, highlighted the country’s crypto-friendly status globally while addressing the United Nations during a summit in New York.

“We are currently in exciting technological times. This is why in Malta, we have launched as the blockchain island by being the first jurisdiction worldwide to regulate this new technology that previously existed in a legal vacuum.”

“Rather than waiting for global guidance or just applying its existing rules to the crypto business, Malta moved forward aggressively to create a new regulatory framework for cryptocurrencies.”

On Nov. 1, the VFA Act entered into force. No licensed agents have been announced so far, as the process is still ongoing.

Despite Malta’s reputation as being a pro-blockchain country with fast-tracked bureaucracy, the process of setting up a crypto-related business on the island seems to be considerably complex.

On Oct. 18, the Times of Malta reported that almost two-thirds of those applying for Malta’s cryptocurrency agent certification have failed. Since the VFA Act came into force in July 2018, the exam as well as a training course have been mandatory for all those looking to work as “agents” in the crypto sector of Malta. The bill elaborates that “agents” are practitioners such as lawyers, accountants and auditors who may want to liaise between initial coin offering (ICO) operators — or other cryptocurrency vendors — and the island’s watchdog, the Malta Financial Services Authority (MFSA).

According to the Times of Malta, around 250 people took the exam, which contained a series of multiple choice questions. After recognizing the percentage of successful candidates was set to be “extremely low,” the examiners allegedly made a last-minute decision to revise the assessment scheme. Nonetheless, the pass rate eventually transpired to be 39 percent.

Jonathan Galea, president of BitMalta, a local nonprofit organization dedicated to the advocacy of blockchain and cryptocurrencies, who wrote his doctorate of law thesis titled “The Effect of Bitcoin on Money Laundering Law” in the past, told Cointelegraph that the domestic AML framework for crypto companies consists of several layers.

On top of AML and Know Your Customer (KYC) policies imposed by the domestic crypto regulatory framework, there is the Fifth AML Directive that was introduced across the EU in July 2018 as a response to the terrorist attacks and the offshore leaks investigated in the Panama Papers. According to Galea, crypto exchanges and wallet service providers specifically are subject to the Directive in Malta, as well as other crypto “agents” defined by the above mentioned VFA Act.

“All operators, agents, and services providers hoping to conduct business in Malta will need to stringently adhere to obligations under the AML framework in Malta, which has always been implemented a notch above what is normally required on an European level. We recognise certain risks related to such a new industry as this one [crypto], which are mostly associated with exchanges and ICOs, and therefore we are doing everything we can to address them from the get-go.”

Daniele Bernardi, CEO at financial advisory company Diaman Group, which has a physical presence in Malta, confirmed to Cointelegraph that the MFSA has split their regulatory purview into two sectors after enacting the blockchain-related bills: Now, the watchdog oversees blockchain and traditional businesses separately — however, strict KYC and AML procedures are mandatory for both sectors, Bernardi adds. According to his view, money laundering with cryptocurrencies is even less realistic in Malta:

“Historically, Malta has been challenged with respect to financial crime enforcement even in traditional sectors, and it is currently working on a detailed plan to improve and enhance its financial security framework more generally, including strengthening its financial intelligence unit and improving the supervisory framework. As such, Malta’s embrace of a new area is of some concern to global oversight bodies, including the IMF.”

Indeed, as Bloomberg writes, EU officials have largely deemed Malta’s Individual Investor Programme — a government initiative that sells Maltese passports to foreigners for 650,000 euro (~$750,000), though less for additional family members — controversial, arguing that it could lead to an influx of dirty money into Europe’s financial markets.

There are more concrete problems on the island, many of which were investigated by journalist Daphne Caruana Galizia, who studied the Panama Papers and claimed that two of Muscat’s close associates had established companies in the country. According to Caruana Galizia, they used the firms to launder money and illegally sell passports to Russian nationals. Later, she reported that Muscat’s wife had also registered her own Panamanian shell company, which allegedly engaged in suspicious activities as well. Eventually, Caruana Galizia’s blog became the most-read news source in Malta, as per Bloomberg, and she faced as many as 47 lawsuits, about 70 percent of which were purportedly filed by government representatives. In October 2017, Caruana Galizia was killed by a car bomb.

“Malta’s government published its own money laundering and terrorist financing assessment, noting the country as high risk of receiving foreign proceeds of criminal activity. This risk is especially notable with regard to cryptocurrency, as Maltese exchanges with poor customer and transaction monitoring controls would further highlight that susceptibility.”

Therefore, while the Maltese government has embraced the reputation of being the “blockchain island” and ceased the opportunity to evolve a definite regulatory framework for cryptocurrencies, which the EU has notably been struggling with, its history with the traditional financial market continues to put international officials on guard.

Meanwhile, the local opposition is also alarmed. On Jan. 26, the Nationalist Party (PN) doubted the efficiency of the government’s crypto-oriented politics. The PN highlighted the recent closure of blockchain company DQR Group, which relocated to Malta from Germany in April 2018 in a bid to find a friendlier environment for their business. Specifically, Silvio Schembri argued that the firm’s arrival would “cement Malta’s reputation as the Blockchain Island” as the firm’s arrival was announced.

According to local media outlet Lovin Malta, DQR had laid off most of its staff after one of its main investors, the German Bitcoin mining company Genesis Mining, ran into financial difficulties caused by the bear market.

Reacting to the news, PN representatives argued that the government had no sustainable strategy to “build and strengthen” the blockchain industry in the country. The party said in a statement, quoted by Malta Today:

“If the government really wants Malta to become the Blockchain Island, it should attract sound and credible investment from renowned companies and companies able to provide all the necessary expertise for Maltese workers to grow and prosper in this innovative sector. [...] The government should ensure that [...] proper due diligence is carried out before granting licenses to operators.”

In response, the government heavily criticized the PN for “gross hypocrisy”:

“The Opposition showed gross hypocrisy when it used a company’s internal situation for its own purposes and when it had not taken part in any of the six public consultation exercises on blockchain.”

The Maltese parliament had to turn to similar statements previously this month, when PN leader Adrian Delia expressed concern over an alleged lack of activity in the domestic crypto space in recent weeks.

Specifically, as per the Malta Independent, which did not quote Delia directly, he considered that “Malta was touted as Bitcoin Island by the government but the government has been completely silent over the Christmas holidays on practically everything.”

Following his comments, Malta’s Parliamentary secretariat for financial services, digital economy and innovation retaliated, claiming that the Maltese capital of Valletta “was going to be giving more peace of mind and protection for cryptocurrencies such as Bitcoin.”

Meanwhile, DQR CEO Kristian Haehndal assures that, despite the crash, his firm will not be leaving Malta.

“We didn’t expect [the market dip] to affect our partner so rapidly, but we won’t walk away from Malta as quitting isn’t part of the blockchain philosophy. We are in the process of bringing in new investors and we are very, very close to restarting our operations.”

According to data obtained by Gatt Tufigno Gauci Advocates for Cointelegraph, the Maltese government has received more than 1,000 applications for crypto licenses under the VFA Act.