Tezos and Chainlink are the top-performing cryptocurrencies as Bitcoin is consolidating with a week left before the halving.

When Bitcoin (BTC) goes down, Chainlink (LINK) and Tezos (XTZ) go down. But when Bitcoin starts to move upwards, a much bigger move can usually be expected from these two coins as well.

As Bitcoin hit a temporary bottom yesterday at $8,450, so did Chainlink and Tezos, which are ranked 12th and 10th by market capitalization, respectively.

Chainlink has been hovering between a narrow range, as the $3.85-4 level is seen to be a resistance level while the $3.40-3.50 level can be confirmed as support.

As the price of Chainlink was moving towards that support yesterday, the big question arises whether it was capable of holding that level for support one more time. The result was a 10% bounce. 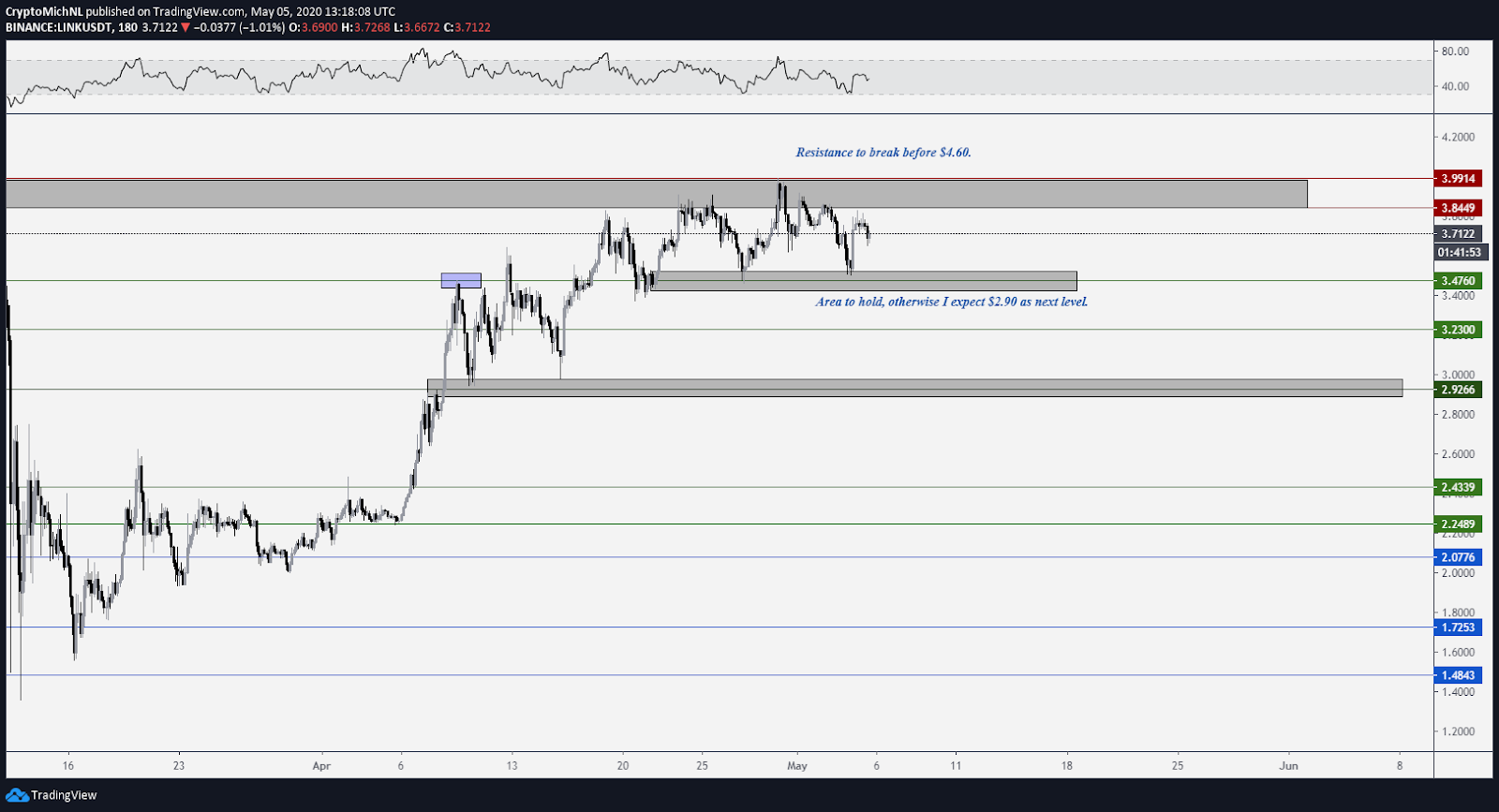 Just as Bitcoin is consolidating inside a range so is Chainlink. Support levels are clearly defined with the $3.40-3.50 area, while the resistance at $3.85-4 remains the key level to break.

As the range tightens, a volatile move can be expected to occur shortly. A breakthrough above the $3.85-4 resistance level will likely trigger continuation towards the $4.60-5 areas, while a breakdown below the $3.40 level indicates weakness and likely continuation towards $2.90 and possibly $2.25-2.40. 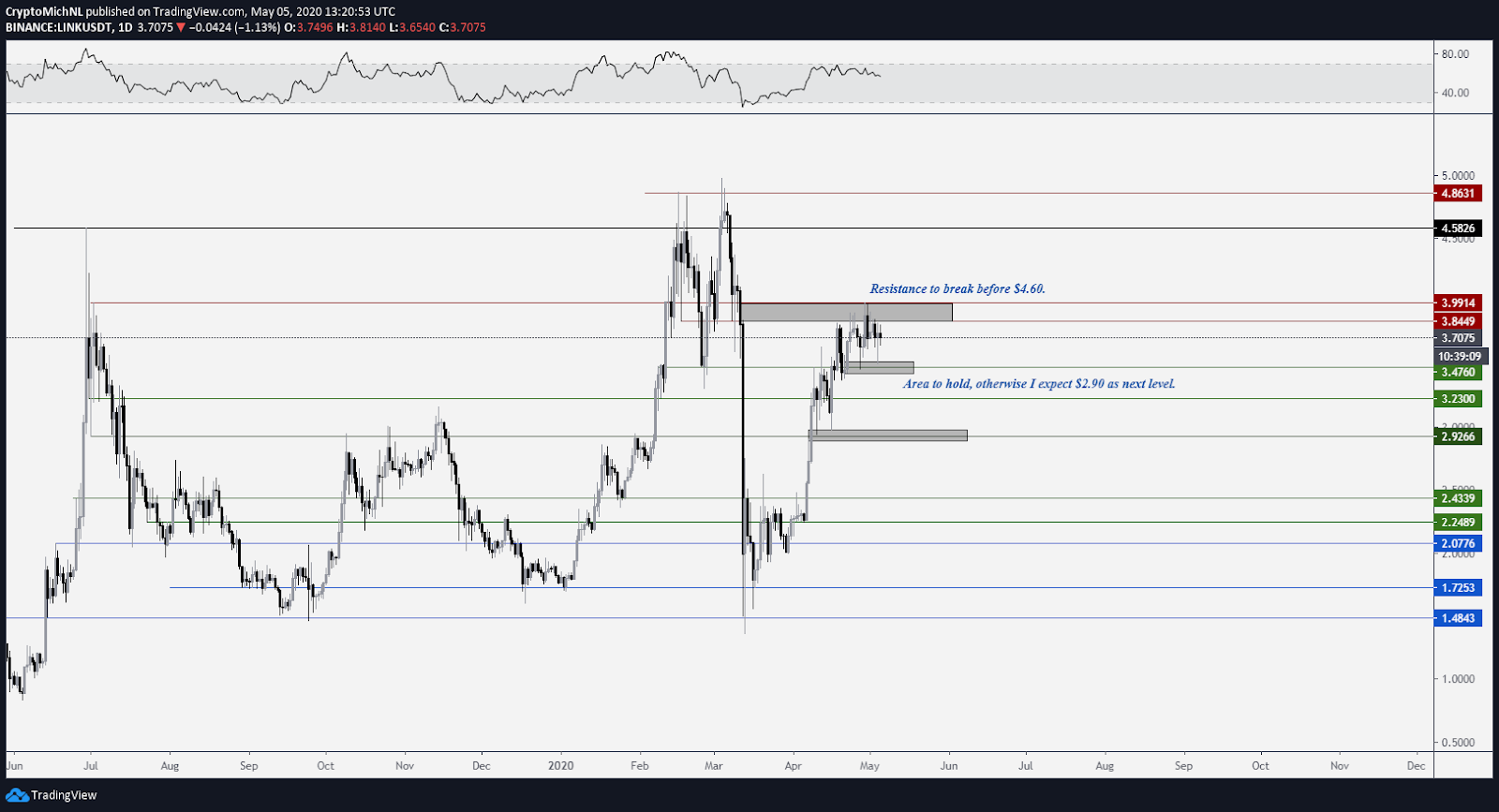 As the chart is showing, the price of Chainlink has found support at the previous high of $3.40. As long as that remains support, upwards continuation is likely. The levels are clearly stated from previous highs.

A breakthrough above $4 warrants continuation and a possible move towards $4.85-5, which is equal to a breakout of Bitcoin above $9,300 since Chainlink usually follows the movements of Bitcoin. 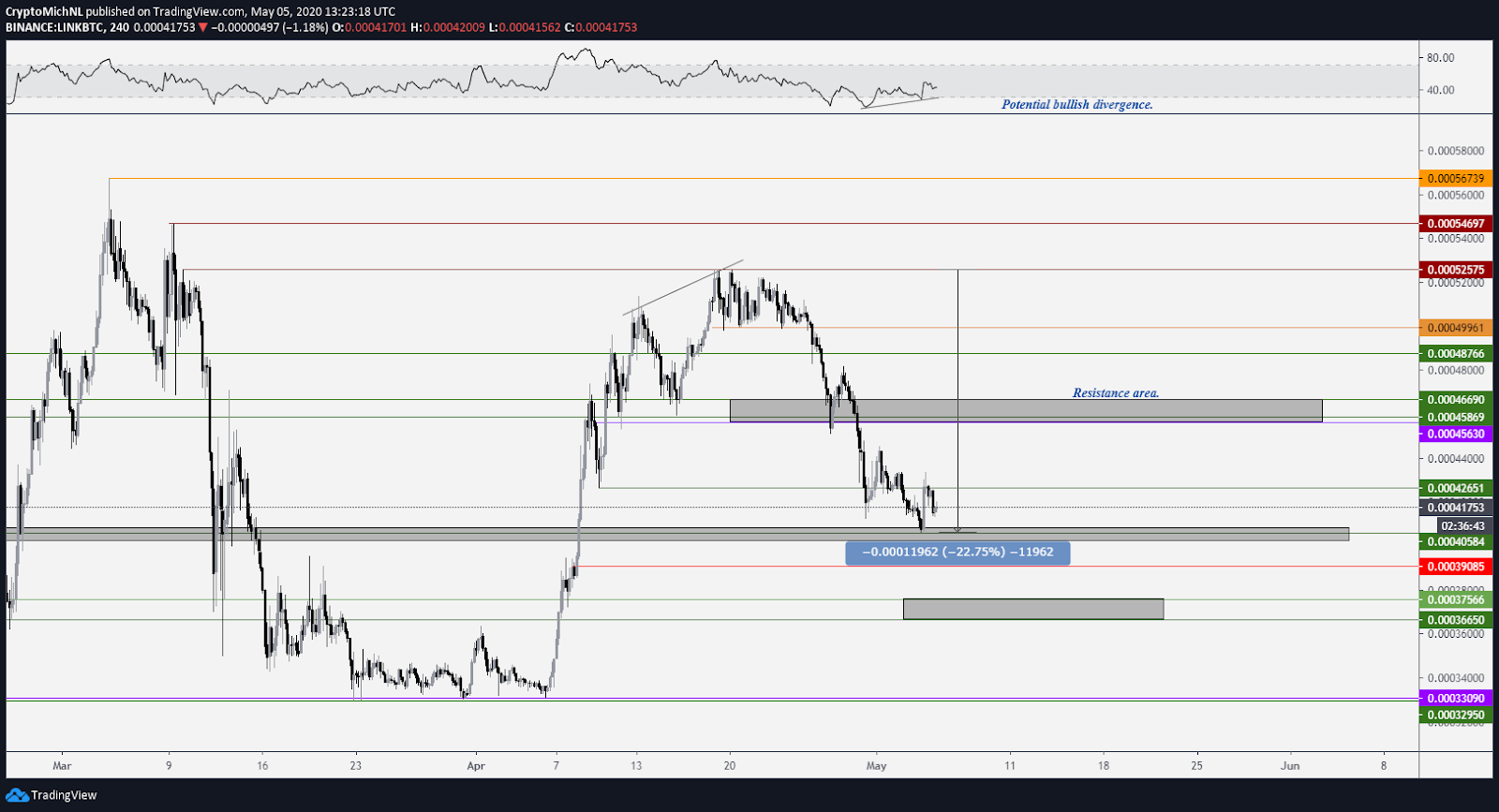 However, is Chainlink showing strength recently, or is it Bitcoin that is holding up the USD level of Chainlink? The latter seems to be the case. The BTC pair of Chainlink has been showing weakness, as it dropped more than 20% in the past two weeks.

Is that a strange occurrence? No, because the halving for Bitcoin is a week away, which makes investors more interested in Bitcoin than in altcoins. Therefore, investors are selling their altcoins to jump on the Bitcoin train.

This is perhaps why altcoins are dropping in their BTC pairs while the USD pairs remain relatively stable. Altcoins will likely catch up to Bitcoin after the halving.

The chart is showing a potential bullish divergence on the 4-hour chart, which indicates a possible trend reversal. Bullish and bearish divergences are important indicators in determining the direction of the current trend.

Confirmation for a short term trend reversal would be a double bottom structure or a breakthrough above the 0.00042600 sats resistance. Breaking that level would warrant continuation towards the previous support at 0.00045600-0.00046500 sats. 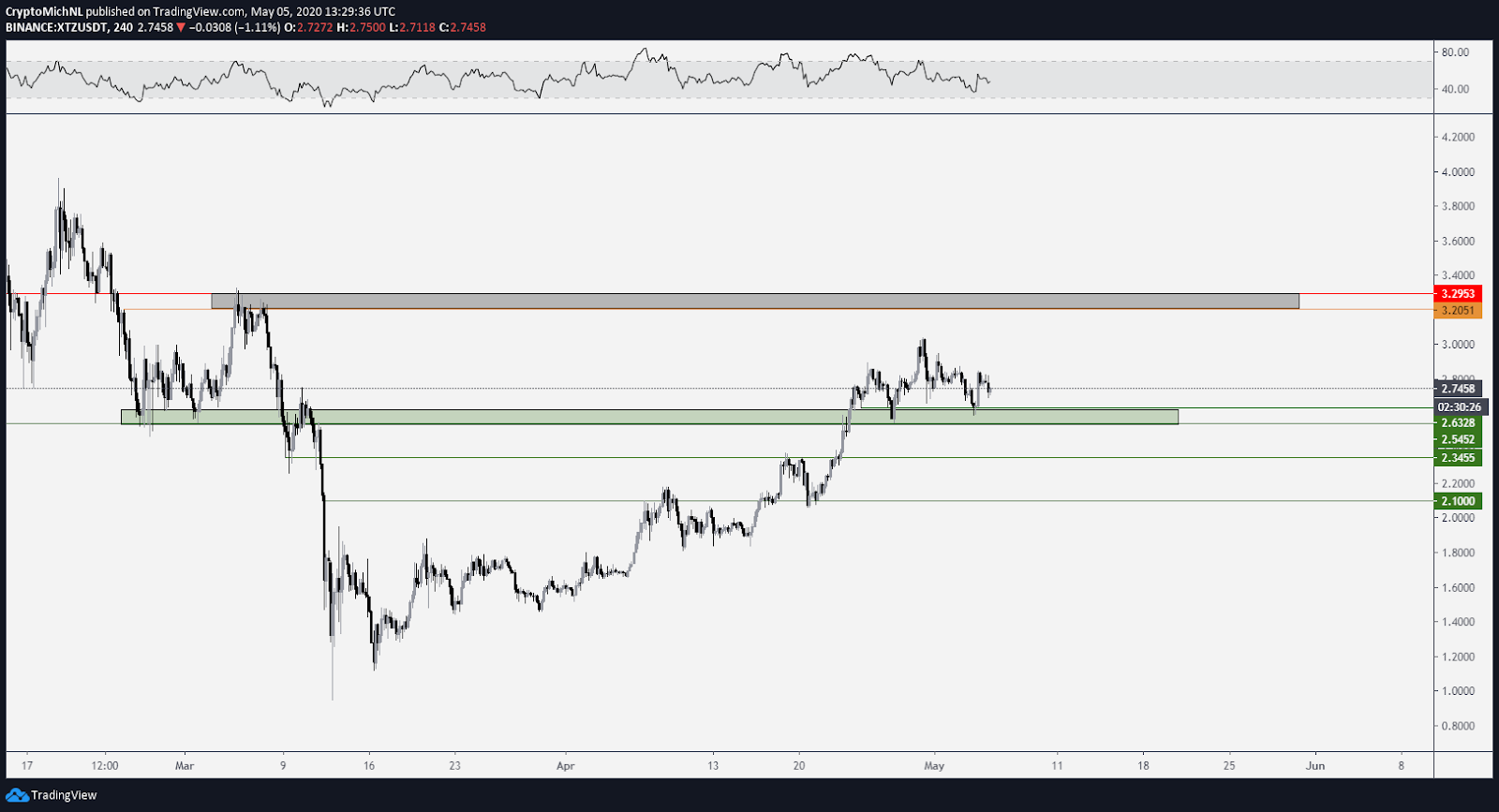 The Tezos chart is showing a similar structure as Chainlink, as the price is consolidating inside a narrow range. The support area can be defined from the $2.55-2.65 area, while the resistances are found at $2.85 and $3 (latter was a peak rally).

However, the price is continuing to make higher lows, a crucial factor for further continuation of upwards momentum. Therefore, as long as the green zone between $2.55-2.65 can remain support for Tezos, further upwards momentum is warranted. 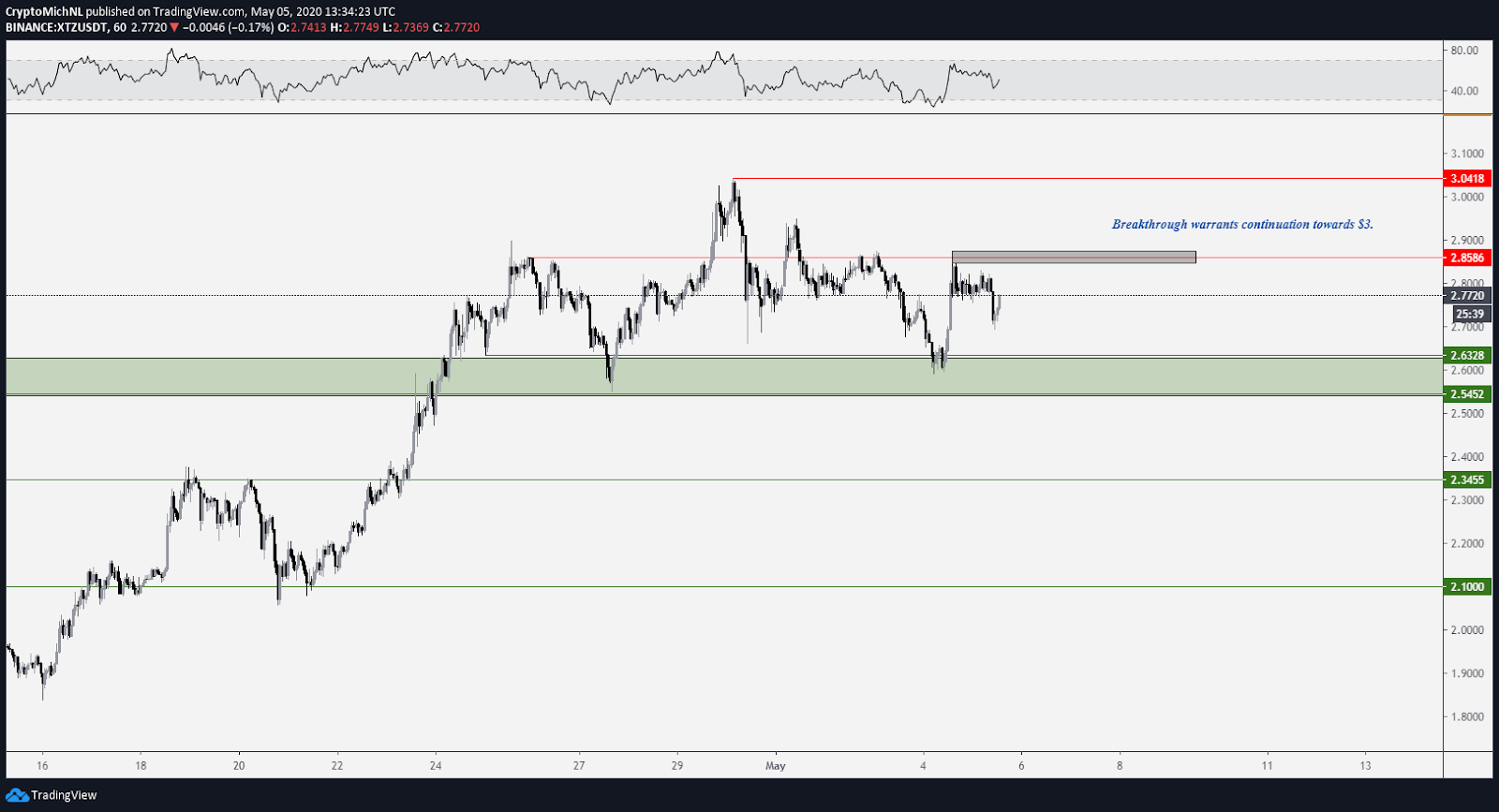 The range structure is quite identical to the Chainlink chart. A break of the $2.85 pivot would indicate further upwards momentum with a small resistance at $3.

The next major resistance for Tezos is found between $3.20-$3.30, as previously stated.

The BTC pair of Tezos shows a 21% selloff 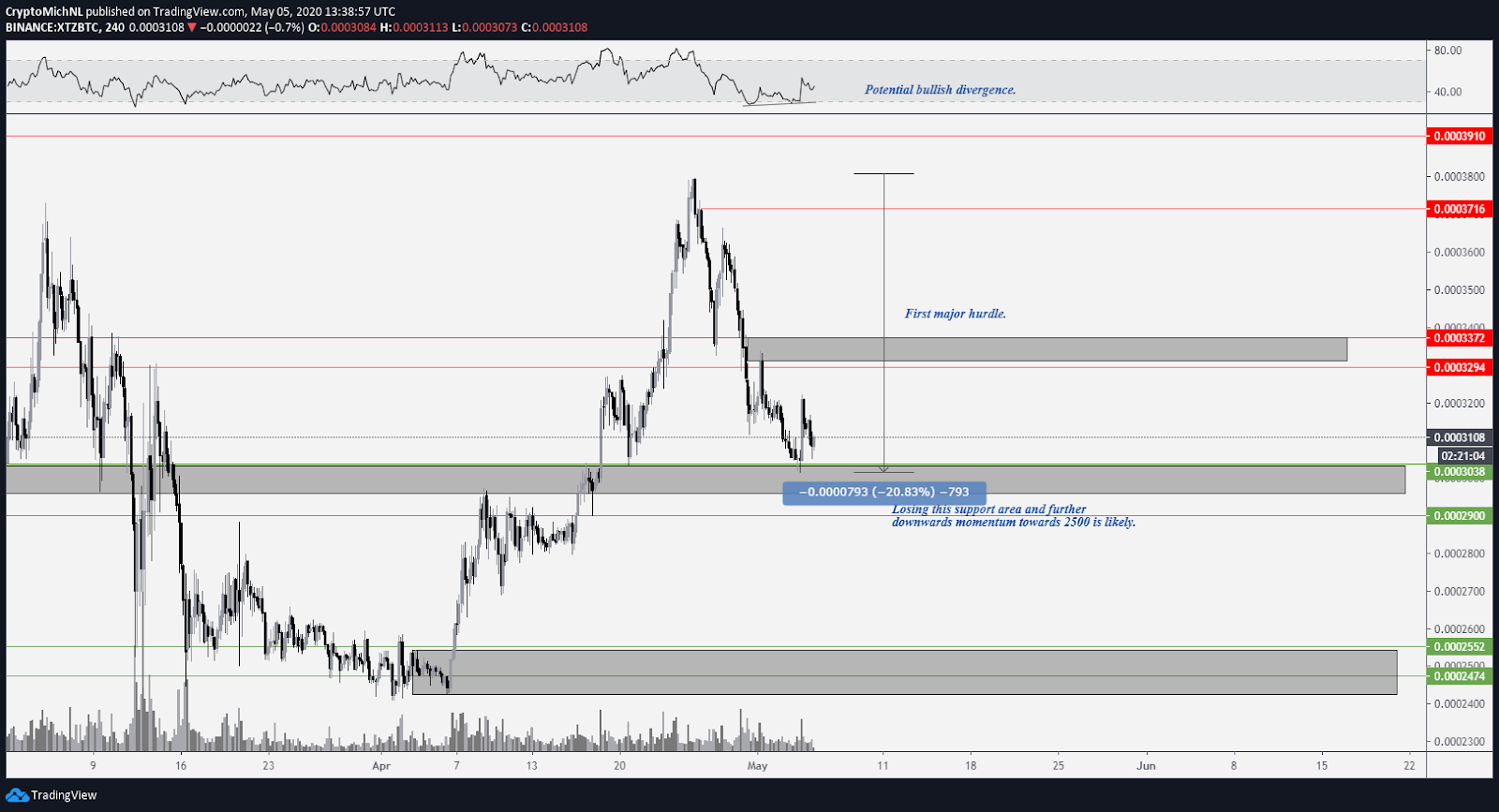 The conclusion remains the same. Investors are getting rid of their altcoins in anticipation of a further surge of Bitcoin, as the main focus and priority is currently on Bitcoin and the halving.

However, when the halving passes, altcoins should receive more attention. One of them should be Tezos, as it’s been one of the most significant performers of the past year, and the other one is Chainlink.

The BTC pair of Tezos is showing a similar bullish divergence on the 4-hour chart as Chainlink. Such a bullish divergence can indicate a short-term reversal for Tezos, where the 0.00003000 sats level should hold as support (a wick towards 0.00002900 sats could occur).