American major cryptocurrency exchange Coinbase has barred British right-wing pundit Milo Yiannopoulos from its platform, Yiannopoulos stated in a Gab post on May 3.

Yiannopoulos is a well-known political commentator and public speaker, espousing controversial far-right views and describing himself as a "cultural libertarian". Previously, Yiannopoulos used to be an editor for syndicated American news and opinion website Breitbart News.

Yiannopoulos’ account on Coinbase was reportedly closed within three minutes: 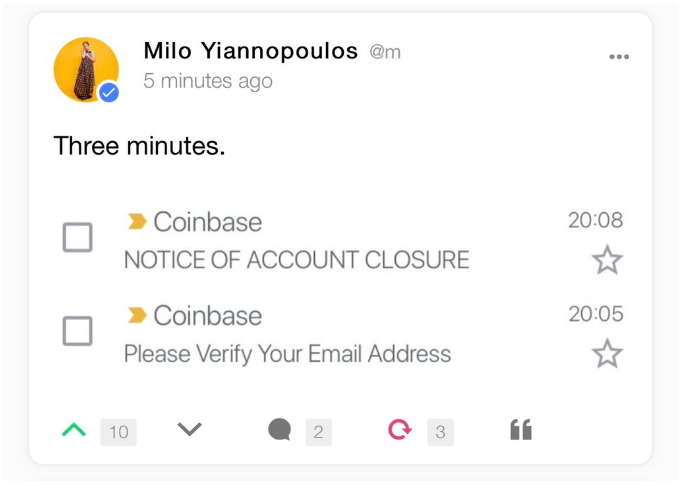 Yiannopoulos was previously banned by social media and networking platforms Facebook, as well as its subsidiary Instagram, and Twitter, according to the Guardian. A Facebook spokesperson reportedly told the Guardian that “we’ve always banned individuals or organizations that promote or engage in violence and hate, regardless of ideology. The process for evaluating potential violators is extensive and it is what led us to our decision to remove these accounts today.”

In January, Coinbase reportedly terminated the personal merchant account of Gab founder Andrew Torba. A possible reason why it is hard for Gab to obtain a payment processor is purportedly its reputation for being the social network for people banned from mainstream platforms for hate speech.

Moreover, last April Coinbase blocked the account of WikiLeaks Shop, the merchandise arm of international anonymous publishing non-profit WikiLeaks, due to terms of service violations. Last December, Julian Assange, founder of Wikileaks and international exile, urged donors to contribute to the online publication by using cryptocurrencies in order to skirt the financial ‘blockade’ by national governments.