Criminal Activity in Crypto: The Fact, the Fiction and the Context

An estimated 0.2% of all XRP transactions are used for illicit activity. How true is this figure and how does it impact the industry?

9826 Total views
155 Total shares
Listen to article
0:00
Analysis
Own this piece of history

It’s the clichéd rhetoric of choice for anyone seeking to discredit crypto. An ace in the hole for any argument against its proliferation. The go-to thesis for those who know very little about cryptocurrency but wish to appear otherwise.

The idea that cryptocurrencies are solely utilized within illicit activities has become both a tool for mass media to disparage the industry and, for many, a reason to steer well clear. But besides being a tired stereotype, it may also be true.

That’s one of the prevailing problems with stereotypes: While many derive from truth, they often represent an oversimplified — and sometimes twisted — version of it. It is true, for instance, that cryptocurrencies are used to facilitate criminal activities.

However, it is also true that any form of value will be used for illegal purposes, whether through crypto or fiat. That being said, digital coins account for just a fraction of the crimes funded with cash — which is also an undeniably more popular means of exchange.

Nevertheless, a lack of regulation and relative anonymity has granted cryptocurrencies infamy along with an air of immorality. In fact, several reports on cryptocurrency’s penchant for illegality have been published in the past two weeks alone.

On Nov. 20, cryptocurrency forensics and analysis firm Elliptic published an analysis on XRP transactions. Within their findings, the firm disclosed that $400 million worth of XRP had been used for “illicit activity.” This represents just 0.2% of total transactions, something which Elliptic suggests makes the vast majority of activity “legitimate.” Still, $400 million is no insignificant number. This is especially true for XRP, which was designed with institutional and commercial financial systems in mind. 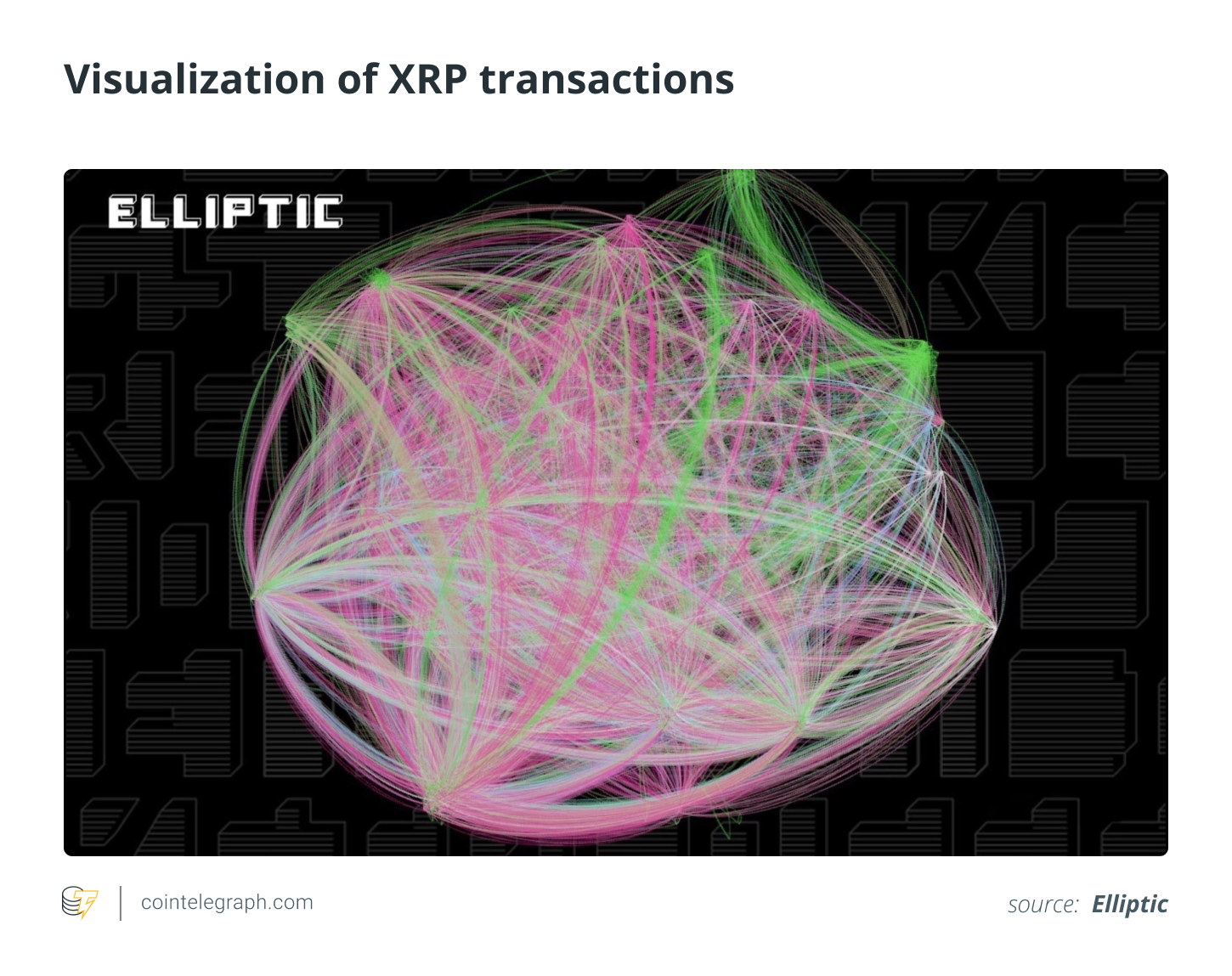 “Any payments system, and especially open ones such as XRP, will be used for some level of illicit activity. What is critical is that this activity is identified, so that it can be mitigated.”

Robinson is of the opinion that by shining a light on such illicit activity, the company is helping the regulated financial institutions to engage with crypto assets such as XRP, adding that:

“They now have access to tools that allow them to identify whether they have received the tiny fraction of XRP funds that originate from illicit activity, and fulfill their AML obligations by reporting it.”

However, the firm declares that support for XRP is still in beta — a fact that could plausibly compromise the legitimacy of the findings.

Similarly calling the efficacy of Elliptic’s analysis into question was Ripple, the company behind the XRP token. Speaking to Cointelegraph, a Ripple spokesperson questioned the accuracy of data:

“Without more information or a clear methodology shared by Elliptic, it’s impossible to comment on the validity of this report.”

The Ripple representative also stated that the analysis could be little more than a publicity grab:

“We question the motive of this announcement, considering the report and its solution are not yet available, and these activities only account for 0.2% of XRP transactions — it seems like a PR stunt to leverage a better known name.”

As for Elliptic’s modus operandi, Robinson remained fairly tight-lipped, explaining the methodological basics while refraining from too much detail, although he did mention that a number of techniques are used: “We identify crypto-asset wallets that are associated with illicit activity, ranging from dark marketplaces to ponzi schemes or exchange hacks.” When pressed on the dangers of wrongly accusing an address, Robinson urged the efficacy of Elliptic’s methods:

“This is a risk that we are very conscious of, and which we address in a number of ways. For example we will only link a crypto address to an identified actor if we have clear proof of this attribution.”

PR stunt or not, in order to glean some accord on the reported figure, it’s crucial to get an idea of statistics concerning comparable tokens. With this in mind, Cointelegraph reached out to blockchain analytics firm Chainalysis.

Maddie Kennedy, the director of communications for Chainalysis, remarked that while the firm’s own investigations into XRP are ongoing — and therefore, non-disclosable — analyses on other tokens revealed a fairly sizable chunk of criminality:

“We looked at 27 different cryptocurrencies and found that 0.4% of that transaction value is sent to an illicit entity. While that may seem like a small percent, that equals approximately $3.8B from January to October 2019.”

To clarify, that’s 0.4% of the total transaction value of 27 different cryptocurrencies. Given that 0.2% of total XRP transactions were presumed to be for illicit purposes, Eplipic’s findings are reasonably significant.

However, these figures are overshadowed by the ones the company found when conducting a similar study on Bitcoin. It suggests that dark web purchases currently account for approximately 0.5% of all BTC transactions. Robinson expanded on why he believes this figure is higher for Bitcoin than it is XRP.

“XRP is not as liquid as BTC, XRP is more centralised than other crypto-assets, and perhaps more associated with traditional finance — this might make it less attractive to illicit actors, who might prefer something more decentralised and ‘neutral,’ such as bitcoin.”

Rotting from the inside out?

While the nefarious use of crypto is still prevailing to some extent, crime within the industry seems to be boldly flourishing. According to a recent report from blockchain forensics firm CipherTrace crypto crimes have increased by 150% over the last year. Digital asset theft and fraud now total $4.4 billion, almost tripling the $1.7 billion witnessed in 2017. 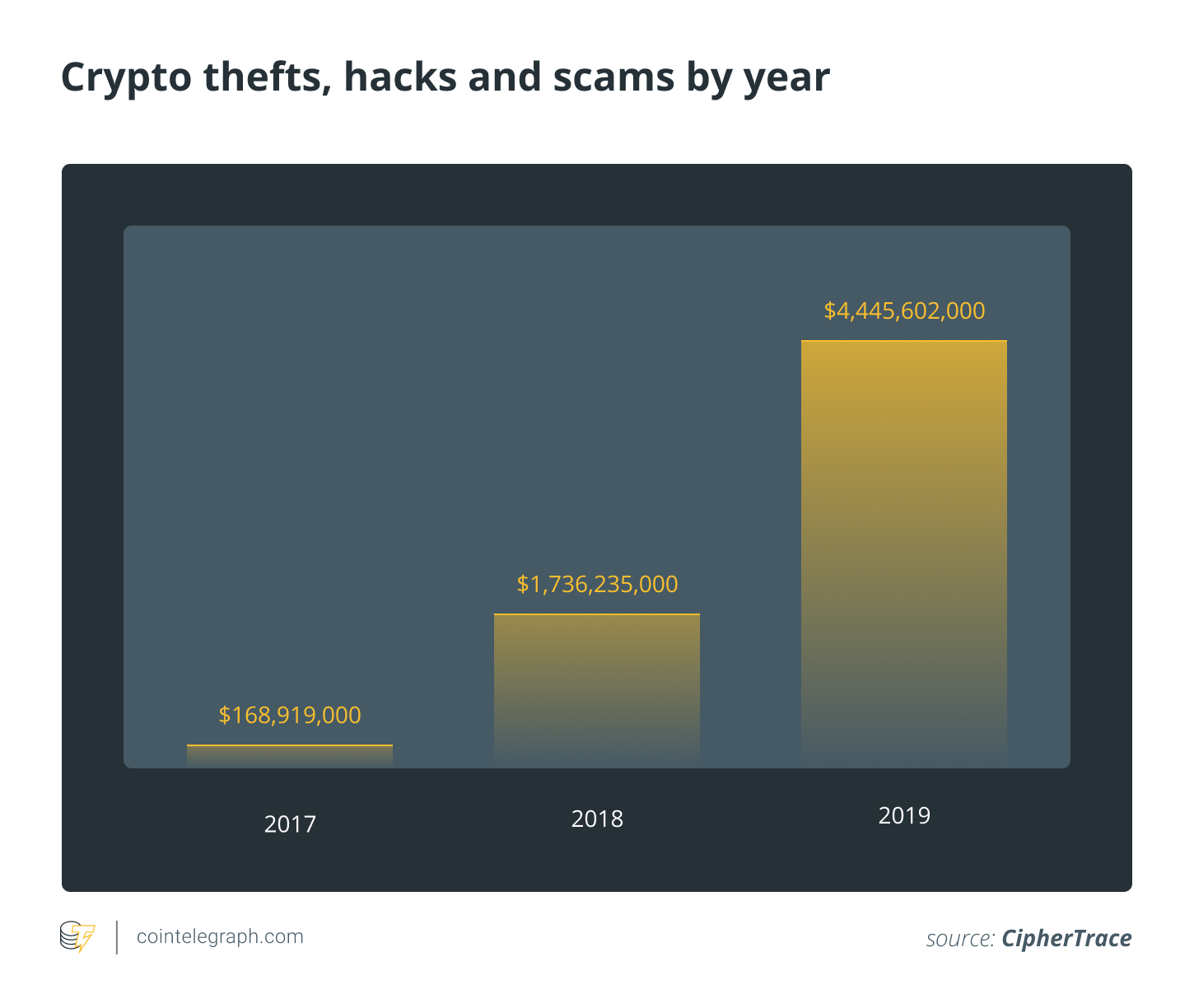 Large-scale robberies are the main reason behind such a year-on-year rise, with alleged Ponzi schemes such as PlusToken claiming the lion’s share. Billing itself as a high-yield investment program, PlusToken is the latest project being discussed as an exit scam, with the report stating that it has appropriated $2.9 billion from its investors/victims.

Another high profile fraud case cited by Ciphertrace was that of the QuadrigaCX, a Canadian-based crypto exchange. A scandal involving the mysterious — and highly contested — death of the exchange’s CEO, and a misplaced mater key. All of this amounted to a loss of $190 million in cryptocurrency.

And that only scratches the surface. According to the report, many more crypto crimes aren’t even getting air time due to their relatively insignificant size compared to bigger heists.

The latest incident took place on Nov. 27, Lee Sirgoo — the CEO of crypto exchange Upbit — confirmed a theft had taken place on the platform. Hackers allegedly succeeded in compromising the exchange’s hot wallet, gaining access to, and absconding with, 342,000 Ether ($51 million) in user funds.

Putting it all in context

Intriguingly, even amid the rising prevalence of crypto crime, the use of cryptocurrencies for illicit activities appears to be dwindling. Back in 2017, a study by the University of Oxford found that an extensive 44% of all BTC transactions were felonious in nature, associated with financing criminal activity. In contrast, in July 2019, a Chainalysis report suggested that less than 1% of Bitcoin activity involved crime.

Yet, the stigma still persists. Detractors often drum up conjecture using the (mostly baseless) argument of cryptocurrency’s more nefarious use cases. Ironically, many of these provocateurs are proponents of fiat money, the stock market, or even gold — markets that hold their own wicked transgressions.

So, while it can unquestionably be argued that there is some criminal undergrowth within crypto, what about fiat? Earlier this year, U.S. Treasury Secretary, Steven Mnuchin, slammed cryptocurrencies for their part in funding illicit activity.

A briefing on the regulation of crypto observed a hyperbolic reaction from Mnuchin, who advised that digital currencies were a threat to national security, saying “Cryptocurrencies such as Bitcoin have been exploited to support billions of dollars of illicit activity.” However, while attempting to cement the stigma around crypto criminality, Mnuchin failed to provide any clear context.

Employing data from the United Nations Office on Drugs and Crime as well as Chainalysis, researchers revealed that U.S. fiat was used an incredible 800 times more often to launder money than Bitcoin was to fund dark net activities. 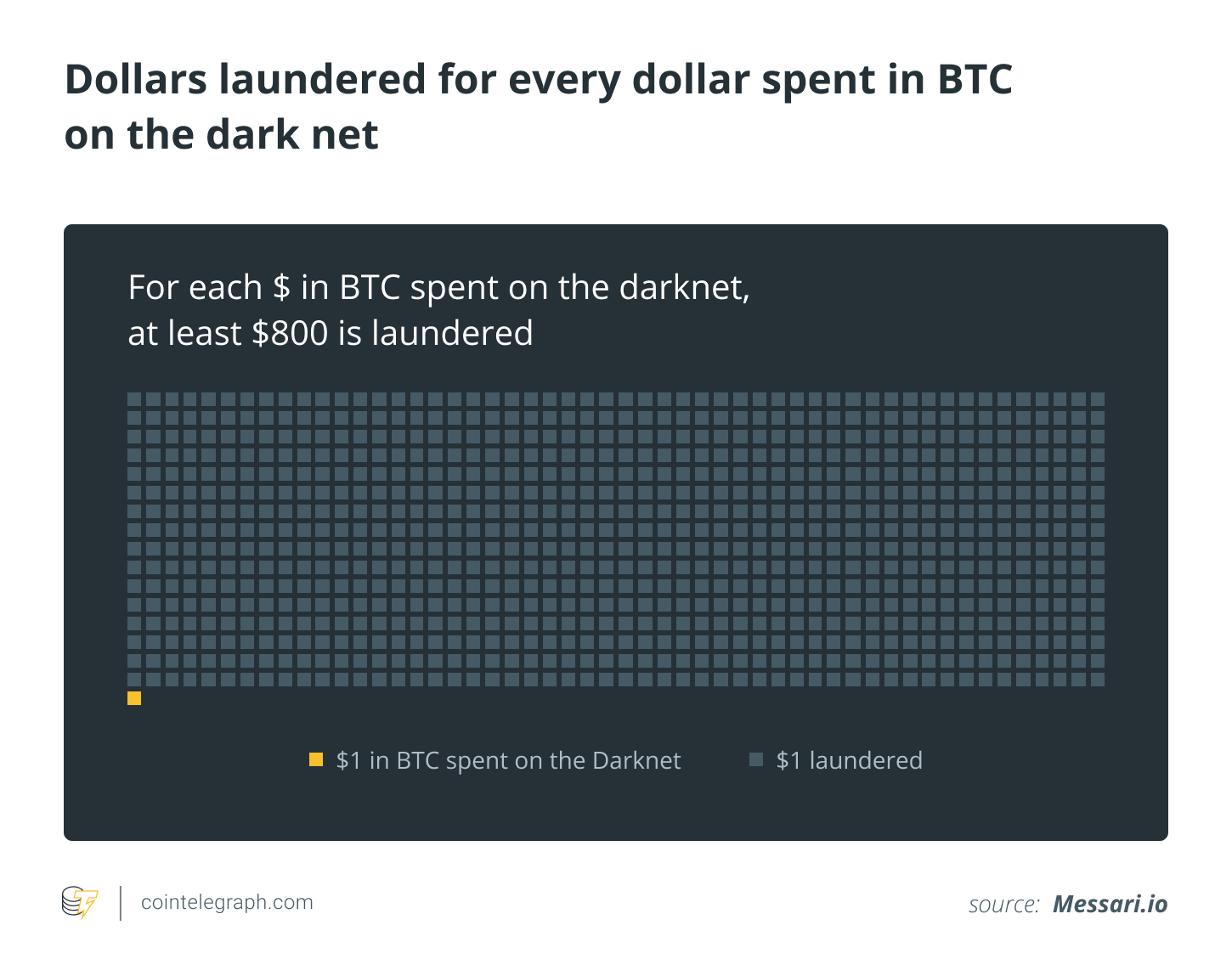 In the end, crypto — just like any other value-based asset — will continue to be used for illicit purposes. The best that can be done is to actively track, monitor and blacklist illegal transactions to ensure they don’t slip by unnoticed. Ironically, that’s much easier to do with crypto than it is with cash.