Crypto Taxation Around the Globe — What Do Regulations Look Like?

Here’s how today’s crypto taxation laws look like across the globe, from the U.S. to South Korea, Switzerland, Japan, Australia and Malta...

8388 Total views
170 Total shares
Listen to article
0:00
Crypto Map
Own this piece of crypto history
Collect this article as NFT

Upon its inception, Bitcoin was envisioned as a borderless currency that could be used by its owners without being affected by the regulatory impositions of any centralized agency or government body. And while this idea in itself is quite grand, the fact of the matter is that today's crypto owners (across the globe) are subject to varying tax restrictions on their digital holdings by local regulatory bodies.

Also, over the course of the past few months, a number of tax agencies around the globe, (such as the United States Internal Revenue Service) have been in the process of creating new guidance frameworks for overseeing their respective crypto industries. For example, Japanese tax authorities have been sifting through data obtained from various local exchanges so as to nab evaders and cheats, while the Australian Taxation Office (ATO) is currently operating a number of investigations regarding tax-avoidance ploys that involve large volumes of digital currencies.

These developments clearly point to the fact that crypto is a matter of concern for a number of tax departments around the world — primarily because they provide people with an avenue for commerce that expands beyond today's existing financial systems. So, here are  some crypto-centric economic frameworks that are being used by countries across the globe. 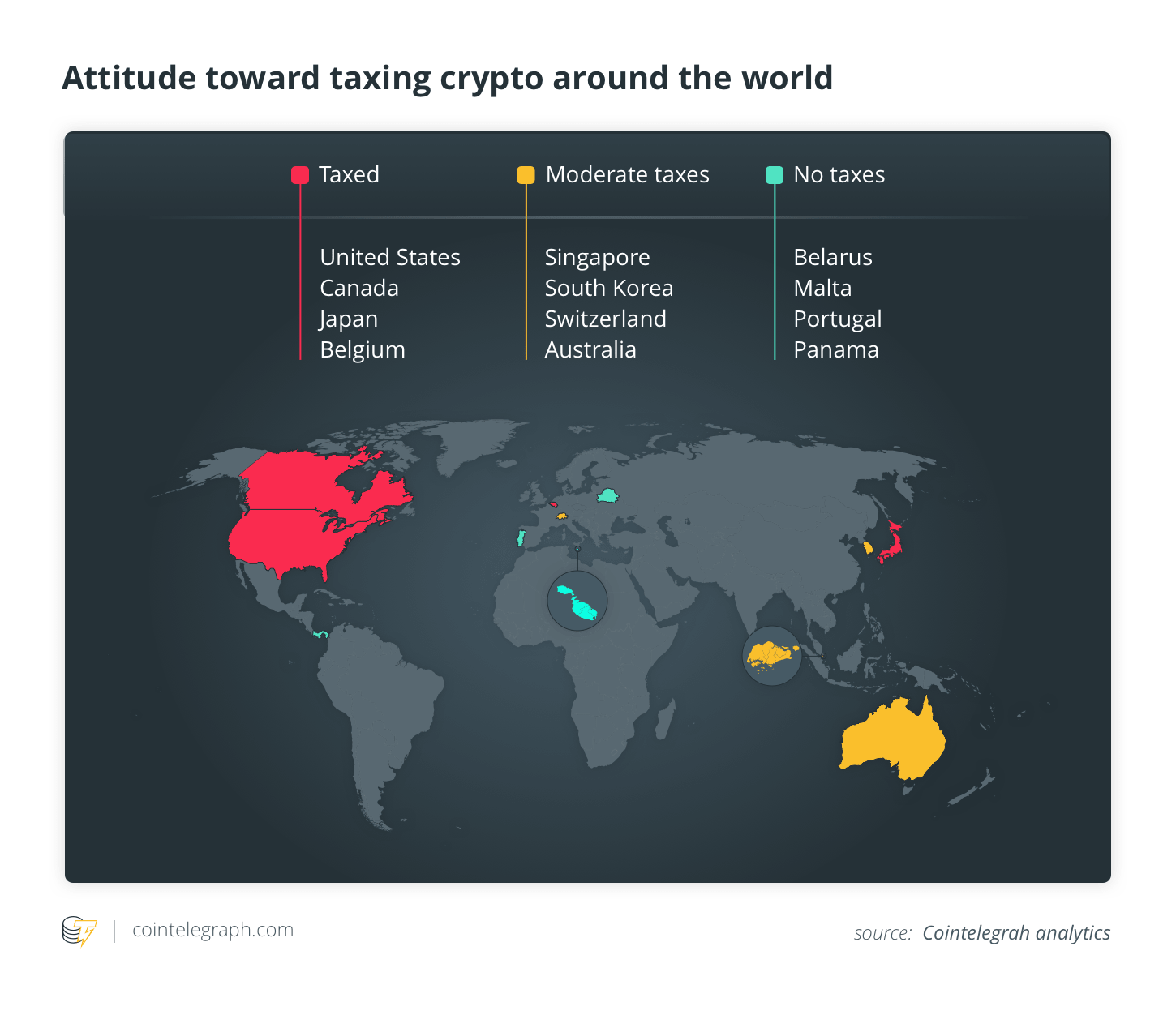 Per the IRS, digital currencies are classified as property that is liable to taxation according to its annual value appreciation or depreciation. Additionally, the U.S. government does not currently recognize crypto assets as being legitimate forms of money — thereby eliminating any provisions for currency conversion-based tax incentives.

Crypto holders within the U.S. are liable to be taxed on their digital assets that have appreciated in value over the span of a single financial year. Not only that, even cryptocurrencies acquired via mining or other trade activities are subject to tax. In regard to the matter, owners are required to declare the fair market worth of their coins (at the time of their purchase) using published exchange rates to determine their taxable value.

This taxation process is quite cumbersome and has resulted in many people making use of cryptocurrency accounting programs that are designed to automatically generate the required records with price conversions in the form of an auditable, tax-friendly report.

Most members of the European Union make use of radically different financial policies and tax codes to govern their respective crypto sectors. They can be either beneficial or harmful for local investors. For example, in Germany, Bitcoin (BTC) is not subject to any capital gains tax — thereby allowing investors to avoid paying significant levies on their holdings if the value of their BTC appreciates.

However, the kicker here is that the crypto needs to be held by the owner for a period of at least 12 months. Also, crypto business owners are required to pay a levy on any gains that are derived from their personal Bitcoin-related possessions (i.e., via corporate income taxes).

In addition, it must be acknowledged that EU citizens currently have the right to move around the region and take up residence anywhere across Germany to favor their commercial pursuits. However, tax residency in Germany is subject to a number of factors including:

Last but not least, per rule 23 EStG, German crypto enthusiasts can trade their tokens in a completely tax-free manner — provided that their capital gains do not exceed a total of 600 euros per year.

One of the world’s most crypto-friendly jurisdictions in the world, Switzerland currently houses the headquarters for the Ethereum Foundation as well as the Libra Association. When studied closely, the country’s tax treatment of cryptocurrencies is quite interesting. For starters, any income acquired through mining has to be declared as self-employment income, while income gained through professional trading is subject to business tax.

The Australian Taxation Office recently released a guidance framework that clearly expounds its stance toward the digital asset industry — especially Bitcoin and certain other premier cryptocurrencies. The ATO classifies BTC, Ether (ETH), etc. as being “forms of property” that are taxable.

On this very subject, a spokesperson for the regulatory body was quoted as saying: "Any financial gains made from the selling of bitcoin will generally be subject to capital gains tax (CGT) and must be reported to the ATO."

Additionally, the ATO views BTC-based transactions as being “barter arrangements” that are not subject to goods and services tax. However, deals involving the the flagship crypto asset are still subject to capital gains tax. The spokesperson mentioned this matter, saying:

“Our view is that bitcoin is neither money nor a foreign currency, and the supply of bitcoin is not a financial supply for goods and services tax (GST) purposes. Bitcoin is, however, an asset for capital gains tax (CGT) purposes.”

There are a number of Asian countries that have taken crypto adoption quite seriously. For example, Japan — a nation where it is legal for people to facilitate their everyday payments using crypto — digital currencies are treated as commodities that are subject to income tax, capital gains tax and corporate tax.

While the filing process is slowly becoming streamlined — with taxes ranging between 15% and 55% — many people still find the process quite cumbersome because they are required to pay levy’s on their asset/conversion gains. Also, owing to the fact that BTC/yen is one of the most popular trading pairs in the world, it seems as though Japan’s existing tax framework will allow the Asian powerhouse to draw in large streams of revenue from its crypto industry.

Lastly, the Japanese government recently announced its decision to create a new tracking system that will allow the National Tax Agency to obtain data from transaction intermediaries, such as digital currency exchanges, altcoin trading portals, etc. Not only that, new regulations will be enforced by the end of the year, making the crypto owners — who earn over 10 million yen (about $88,700) in profits — subject to certain niche taxes.

As things stand, the South Korean government is seeking to derive financial benefit by taxing both its digital currency market as well as its Initial Coin Offering industry. In this regard, Han Seung-hee — commissioner of Korea’s National Tax Service — recently told media that he was planning to tax the use of Bitcoin after the digital asset’s local trading volume skyrocketed not long ago. He also said that he is looking at a number of different ways in which to foster BTC’s relationship with the nation’s existing capital gains tax, value-added tax and gift tax structures. Han said:

“Gains and losses (gains or losses recognized on the basis of relative relationships with foreign currencies or foreign currency) arising from the use of bitcoin, as a general rule, except for cases arising in association with acts that cause various incomes such as business income, are classified as miscellaneous income.”

One of the most popular crypto havens in the world, Malta’s existing economic setup is designed in such a way that it does not tax digital assets. However, any money made through activities related to day trading is considered to be business income and is thus subject to regular taxation.

In terms of setting up one’s business, citizens of the EU, the European Economic Area or Switzerland are allowed to freely move and facilitate their commercial activities across the country. However, in order for other interested individuals to take advantage of Malta’s lax crypto regulations, they will have to either buy property worth (at least) 275,000 euros (roughly $300,000) or pay rent of up to 9,600 euros (about $10,600) per year to the local government.

Singapore has been a trailblazer when it comes to crypto taxation — with the government only taxing profits that are acquired via trading activities associated with one’s digital currency holdings. Businesses or even individuals who have been in possession of their cryptos for extended periods of time (including long-term investment) are not taxed by the local regulator.

Additionally, corporate tax residency (in Singapore) only comes into the picture if a business is actually running from within the nation’s borders. Similarly, individuals are considered tax residents, if and only if, they have spent a total of 183 days or more within the country.

During Q1 2018, the Belarusian government passed a law that was designed to legalize crypto activities across the nation as well as make digital currencies exempt from a host of existing tax schemes. Similarly, under the aforementioned law, even cryptocurrency mining and investment-related activities are exempt from taxes until the end of 2023.

Canadian laws tax cryptocurrencies in pretty much the same way as they treat any other investment commodity —  i.e., 50% of all acquired gains are tax deductible and are automatically added to an individual’s annual income (for that financial year).

Also, day traders who indulge in high transaction volume activities may be considered to be business entities by the Canadian Revenue Agency (CRA), as a result of which they might have to file their taxes using different forms. Lastly, the law requires investors to keep an accurate tab of their crypto-trading activities for purposes related to capital gains tax — and failing to do so might make them liable to certain penalties and financial impositions by the CRA.