Crypto Telegram and Tweet Numbers Are Down, But There’s Hope Yet

Membership numbers for Telegram crypto groups have dropped significantly since 2018 — but interest on Twitter is up so far this year.

Cryptocurrency-related tweet volume and membership figures for Telegram crypto groups have both taken a dive since 2018 — but there are promising signs that social media engagement is starting to turn around.

Joshua Frank, from analytics and finance management startup The Tie, told Cointelegraph nearly all cryptocurrencies saw a reduction in related Tweet volume from January 2018 to April 2020:

“In January of 2018, Bitcoin’s 30-day average tweet volume peaked at just over 80,500 tweets per day. It has fallen 66% since that all-time high. That said, the majority of the drop off in Bitcoin Twitter volume occurred in 2018 and BTC tweet volume is now hovering around the same levels that it was in October 2018.”

Frank added that things were looking up so far this year. “Q1 was actually a positive quarter for crypto in terms of interest," he said.

Cryptocurrency trader Aztec released figures on Twitter on April 15, detailing the extensive loss of members Telegram groups have experienced from June 2018 to April 2020. Crypto groups like @Decred, @CryptoAlert, and @WhaleClub saw the number of members fall 25% to 75%, with most leaving before November 2019. However, @StellarLumens saw 18% of its members leave after that date, and only 16% before. 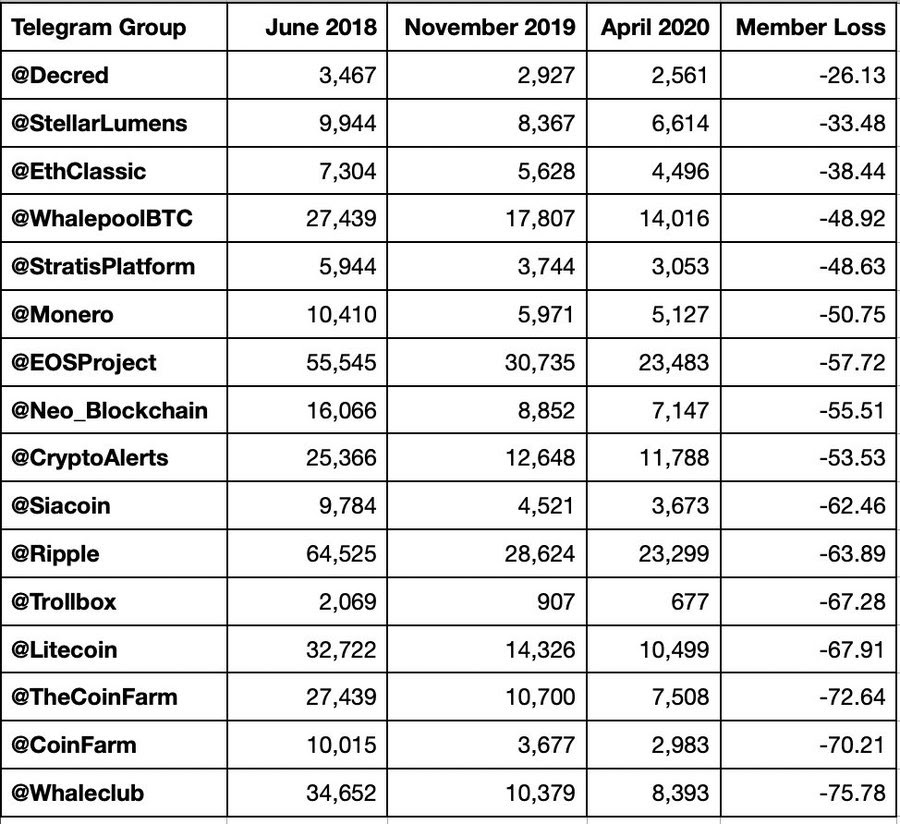 The price of Bitcoin surged 10% today, currently priced in the $7,000s as it was in early June 2018 with a comparable daily Tweet volume. However, both Ether (ETH) and XRP are worth a fraction of what they were two years ago, and both coins show a significant drop in engagement on Twitter and in Telegram activity — over 63% of members left @Ripple.

Despite the seeming correlation between crypto prices and investor engagement, Frank doesn’t think the drop in engagement suggests that digital assets are waning:

“...I don’t think we have seen anything notable among the largest digital assets. In Q1 TRON saw a 41% decrease in conversations despite Justin Sun’s lunch with Warren Buffett and his acquisition of Steemit. As conversations declined by 41%, price fell by 13%. On the other hand, DASH, which was among the best performing assets (+58%) saw a corresponding 61% increase in twitter conversations. “

If online engagement has any correlation with market price, then BTC may be looking at a more favorable Q2 than going to the bears as some have suggested. “If anything,” Frank says, “Q1 was actually a positive quarter for crypto in terms of interest.”