Cryptocurrency Market In The Green, Total Market Cap Bounces Back

Most of the top 20 coins on CoinMarketCap are in the green today, with the market recovering from lows earlier this week

Cryptocurrency markets are on the up today, Jan. 12, with almost all of the top 20 coins on CoinMarketCap in the green, and the highest gain reaching almost 37 percent at press time.

The market had been in the red as recently as Jan. 11, with almost $100 bln in losses in total market capitalization over a three day period. The dip on early on Jan. 11 brought the total market cap of all cryptocurrencies down to around $630 bln. Total market cap is now recovering, climbing to around $720 bln at press time. 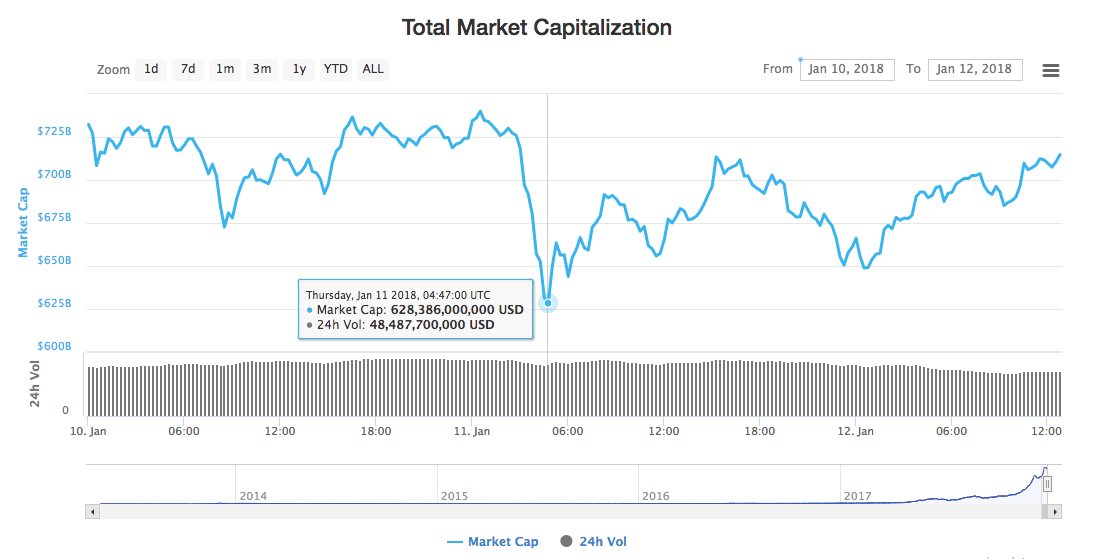 Ripple (XRP), the second most valuable altcoin on the market, is showing almost 18 percent growth over the past 24 hours to press time. The altcoin saw a price dip yesterday, in part due to false reports that South Korea banned crypto trading in the country, where Ripple is traded at high volumes.

Additionally, CoinMarketCap’s Jan. 8 decision to remove several South Korean exchanges from its price calculations -- due to “divergence in prices” --  caused the average price of Ripple in particular to appear to drop suddenly. CoinMarketCap’s delayed announcement of the decision also reportedly led to panic-selling that worsened the drop.

Since Ripple’s Jan. 11 announcement of their partnership with MoneyGram, a fiat payment transfer service, the coin is showing recovery, trading at an average of $2.07 at press time.

Altcoin Stellar, ranking 8th on CoinMarketCap, is showing 33.34 percent growth over 24 hours, and is selling for about $0.67 at press time. The price spike can likely be attributed to a Jan.11 CNBC segment, where Bitcoin investor Brian Kelly predicted that Stellar is the next coin to buy after Ripple’s Moneygram deal success.

Enjoy watching while still HOT and not taken down... ?https://t.co/TKk7FbJd6Q

Altcoin EOS, in the 10th spot on CoinMarketCap, has seen the most significant 24 hour gains of the top 20 coins, boasting almost 37 percent growth. The altcoin’s performance is apparently a response to hype from a Jan. 11 tweet hinting at a secret announcement forthcoming on Jan. 12 from Seoul, South Korea.