Russia’s Ministry of Education and Science introduced a blockchain platform for tracking diamonds.

Indeed, blockchain has been bringing transparency into the diamond industry — a complex ecosystem where corruption and irresponsible mining appear to be largely present.

The history of blockchain in the diamond industry can be traced back to May 2015, when Australian entrepreneur Leanne Kemp founded Everledger — a global digital registry for diamonds powered by the IBM Blockchain Platform. One of its main goals was to solve the “blood diamonds” issue — i.e., preventing the circulation of diamonds mined in war zones and sold to finance oppressive regimes. Everledger uses grading reports provided by Gemological Institute of America (GIA) for assessing the diamonds. Kemp told Cointelegraph in July 2018:

“We do not see ourselves as a crypto company — and, to be honest with you, we don't even see ourselves as a blockchain company. We're building a platform of provenance to help with transparency, and conflict and opaque markets. And we want to build an ethical trade platform.”

The idea of tracking gems is not new — in 2003, the Kimberley Process Certification Scheme (KPCS) regime was established by a United Nations General Assembly Resolution to increase transparency in the diamond trade and keep conflict diamonds out of the market. Essentially, the process implies that KPCS participants monitor shipments of rough diamonds and certify them as “conflict free." More specifically, they follow a series of self-regulatory principles aimed at ensuring that diamonds are bought from legitimate sources. Some of those guidelines are mentioned in the System of Warranties introduced by the World Diamond Council in 2015. 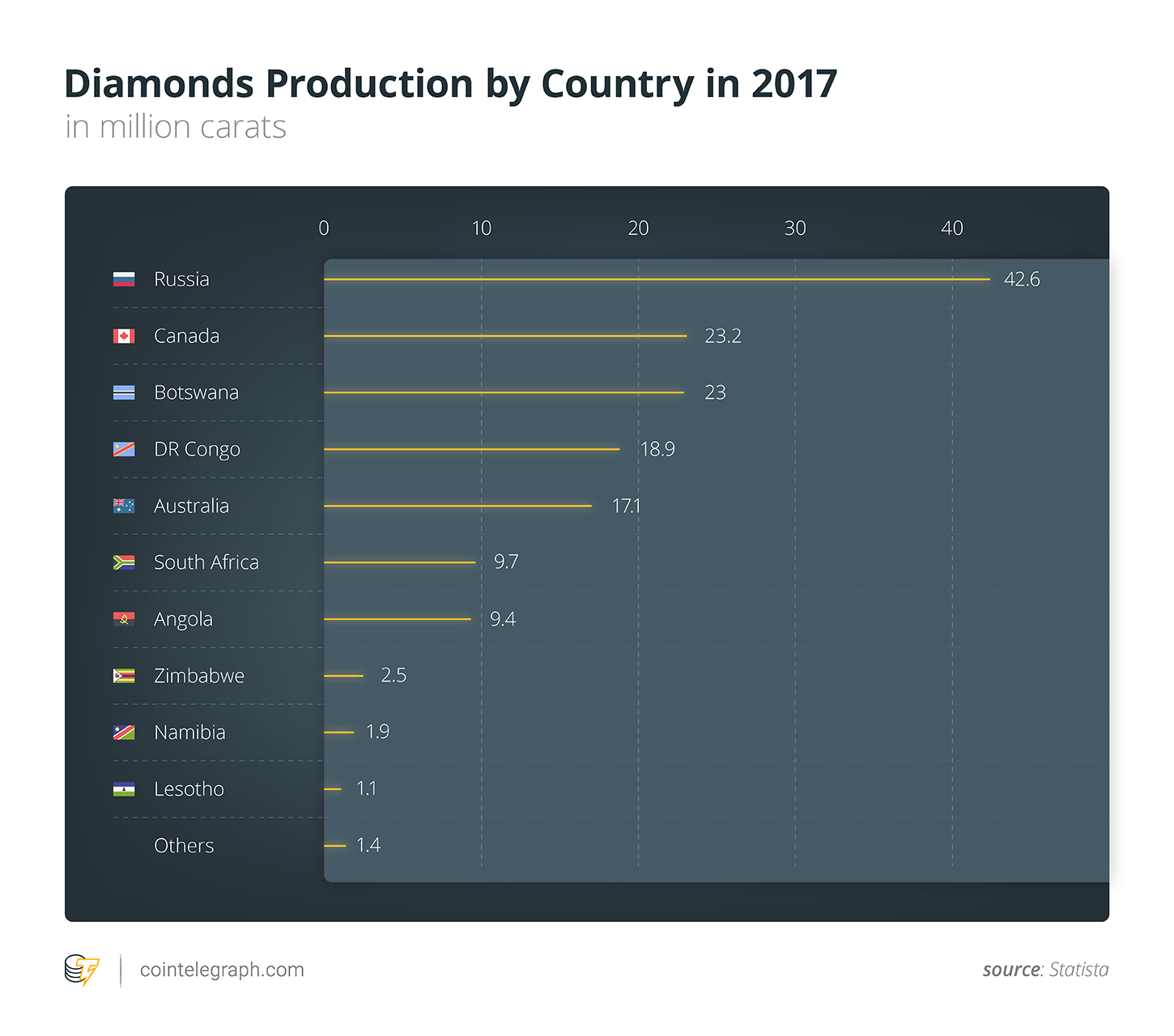 While the KPCS scheme has been adopted by more than 80 countries since then, its efficiency has been questioned. In December 2011, international nongovernmental organization (NGO) Global Witness quit the program, arguing that “most consumers still cannot be sure where their diamonds come from” and criticizing more specific KPCS members’ decisions:

“The decision to endorse unlimited diamond exports from named companies in the Marange region of Zimbabwe – the scene of mass killings by the national army – has turned an international conflict prevention mechanism into a cynical corporate accreditation scheme.”

Further, in December 2017, Canada-based NGO Impact, which monitors the management of natural resources in Africa, also pulled out of the scheme. In an accompanying statement, the NGO’s executive director argued that KPCS “did not establish a conflict-free and legal diamond supply chain,” instead giving consumers “false confidence about where their diamonds come from.”

Decentralization, on the other hand, and the transparency that it implies, might help the industry evolve further and make sure that self-regulatory precautions are followed.

An immutable ledger would allow access to the full account of a particular diamond’s history and eliminate the possibility of forging documents, as every milestone of the gem’s destination would be recorded on the blockchain, according to representatives of Alrosa, a Russian partially state-owned diamond mining company that reportedly handles around 27 percent of global diamond production by volume:

"Creating a blockchain-based tracing system is another step towards ensuring the transparency of the industry. Blockchain could allow to track each stone's history, from its extraction to the final purchase. This greatly lowers the chances of any unfair or wrongful transaction for both consumers and resellers. Such transactions may include purchase of fake or synthetic stones under the guise of natural ones, sale stones with overstated specifications or blood diamonds coming from conflict areas.”

Blood diamonds are not the only issue, as gem retailers are also trying to detect laboratory-grown diamonds, which are less valuable among customers, and sometimes are sold as natural ones. 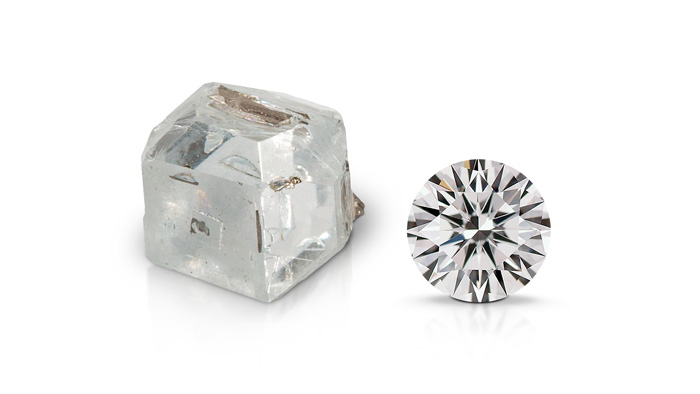 Indeed, some of the industry’s largest players — Alrosa included — have already collaborated with blockchain-based platforms to introduce DLT solutions for a conflict-free, responsible diamond trade.

In September 2018, major Hong Kong-based retailer Chow Tai Fook Jewellery Group joined the Everledger project with its GIA grading reports to boost the sales of the T MARK line, in which the diamonds are inscribed with traceable codes so that their origin can be checked.

“We announced our collaboration with GIA in May last year to use blockchain to enhance our offering and add an additional layer of trust for consumers of T MARK. The pilot service was later launched to the market in September in the same year,” Peony Sze, spokesperson for Chow Tai Fook Jewellery Group told Cointelegraph, adding:

Sze believes that blockchain’s arrival “is a natural evolution for the diamond industry,” which will eventually be picked up by other players as well:

“More and more leading companies in the gem and jewellery industry are developing or using blockchain in different facets of their products and services across the supply chain to enhance customer experience with security and traceability.”

In January 2018, De Beers Group — a large international corporation that specializes in diamond exploration, mining and retail — introduced an initiative similar to Everledger’s, although on a larger, enterprise scale. The company announced it was looking into blockchain to improve the transparency of the diamond value chain and get permanent digital records for every diamond registered on the platform.

De Beers added that an initial proof-of-concept (PoC) trial was successful and resulted in a working prototype. The company’s CEO, Bruce Cleaver, said in a press release:

“Diamonds hold enduring value and represent some of life’s most meaningful moments, so it’s essential to provide assurance that a diamond is conflict-free and natural. By leveraging blockchain technology, we will provide an additional layer of assurance to consumers and industry participants, with every diamond registered on the platform having a record as everlasting as the diamond itself.”

In May 2018, De Beers claimed that they tracked 100 high-value diamonds from the mine to the retailer using blockchain in what was presented as a first for the industry. Additionally, the company announced Tracr, the blockchain-based platform based on the previous PoC efforts and created in conjunction with five leading diamond manufacturers: Diacore, Diarough, KGK Group, Rosy Blue NV and Venus Jewel.

Tracr assigns every diamond it processes with a unique “Global Diamond ID” that records its characteristics — including carat, clarity and color. The data is then recorded onto an immutable digital ledger. Once the data is registered, Tracr verifies it at each milestone of the diamond’s journey, from the mine to the retailer.

The program will be open to the entire industry, Cleaver said, adding:

“The Tracr project team has demonstrated that it can successfully track a diamond through the value chain, providing asset-traceability assurance in a way that was not possible before. This is a significant breakthrough made achievable by the close engagement of the pilot participants who share our commitment to industry progress and innovation.”

Indeed, Tracr has attracted large participants since then. On Oct. 29, Alrosa joined the project, further escalating the project’s potential for the industry. The Russian firm is reported to be the world’s largest producer of raw diamonds in carat terms; together with De Beers, the two companies produce around half of the world’s supply.

As Alrosa CEO Sergey Ivanov told Mining Weekly at the time, the company’s move was motivated by a belief that industry collaboration is essential for the sake of “a common goal.”

In a separate comment provided for this article, Alrosa added that have been testing the new mine-to-market (M2M) system created by the GIA starting from October 2018. However, while M2M is presented as a mine-to-market tracking program and mobile app for consumers, and is also based on the institution's grading reports, there is no indication that it is powered by DLT.

Nonetheless, the number of blockchain-based platforms to track diamonds continues to rise. On Jan. 30, Russia’s Ministry of Education and Science introduced its own blockchain solution for responsible diamond trade. The technology has reportedly been developed by Russian startup Bitcarat.com, which was founded by graduates of the Russian technical university MISiS and the National Research University.

The new Russian diamond tracking technology claims to fully guarantee the authenticity of diamond products across the entire supply chain, from extraction and polishing to the final owner.

The system employs the same principle as other blockchain-powered platforms — allegedly labelling each diamond with a unique digital code and monitoring it on a distributed ledger — and aims to prevent market participants from losing their financial assets, since the diamond market has both natural and synthetic diamonds, as well as fake stones.

There is also Clara, a digital platform that purportedly utilizes both cloud and blockchain technologies to ensure “diamond provenance from mine to finger.” It has been picked up by Canadian diamond exploration and mining company Lucara Diamond, whose CEO, Eira Thomas, announced a move toward modernizing the diamond industry with blockchain in February 2018. Lukas Lundin, chairman of Lucara, announced at the time:

“We believe that Clara will not only modernise the entire diamond sales process but unlock additional value for all participants across the diamond market.”

Nevertheless, blockchain can hardly solve all the industry’s problems at once. As Everledger founder Kemp told Cointelegraph, there will always be room for fraud — for instance, she argued, diamonds could go offline and disappear from the ledger, and there’s always going to be black markets. “It's up to the governance controls to help to reduce that, not eliminate it,” Kemp added.