Does Correlation Between Bitcoin Price and Altcoins Mean Buy the Dips?

New data shows a strong correlation between Bitcoin’s price action and that of the top 30 altcoins when they are in a bullish phase.

Bitcoin (BTC) price reached a new 2020 high on Feb. 13, 2020, crossing $10,497 following a 42% gain since the start of the year. This appreciation in price has led crypto analysts to suggest that a new bull run is in its early stages and some estimate that the price will reach a new all-time high at $27,000 by summer. Other analysts believe the price will reach the coveted $100,000 mark right before the start of 2021. 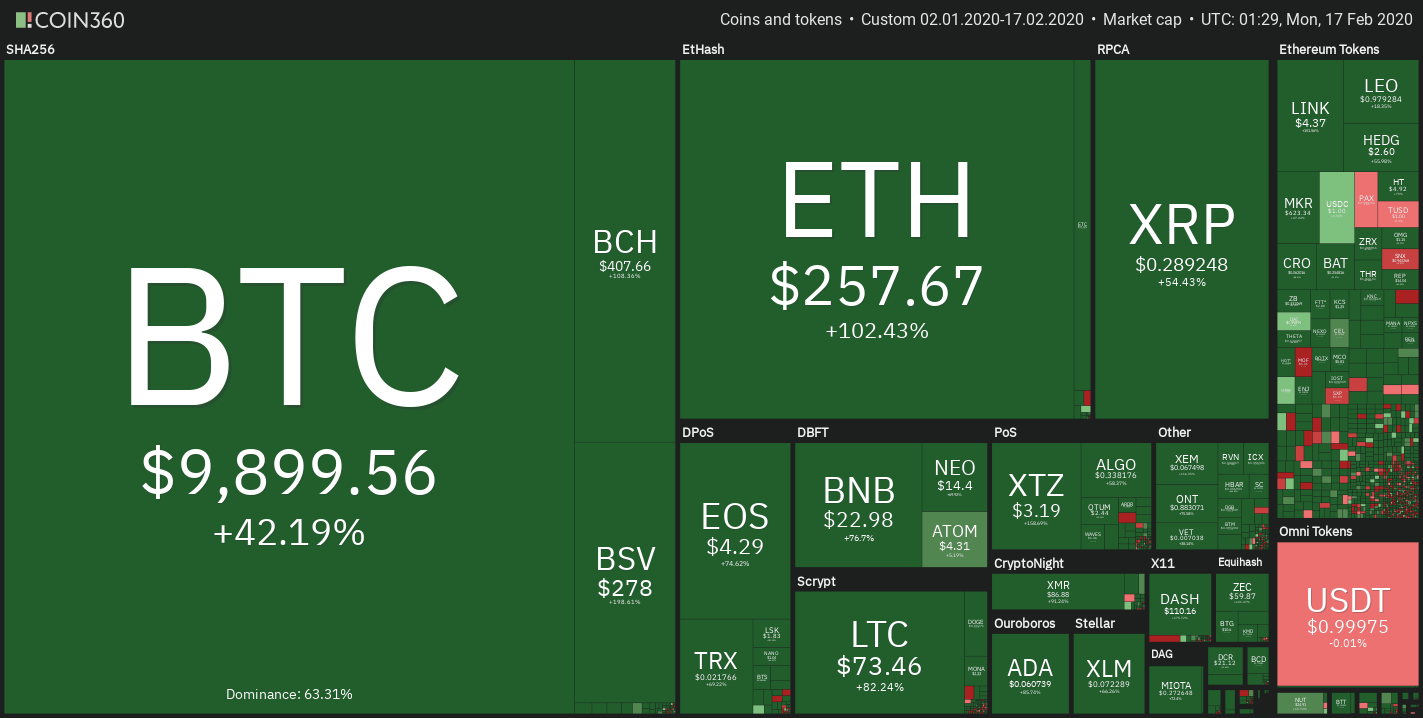 Alongside Bitcoin’s price gain, altcoins have been surging as well. Over the past week NEM and Tezos (XTZ) posted amazing double-digit gains, raising the idea that altcoins and Bitcoin bull periods may be correlated.

Let’s investigate whether this correlation exists during bullish and bearish market conditions.

Bitcoin underwent a strong bullish trend from April 2019 to June 2019, producing a more than 200% return and reaching $13,800 in June. 26, 2019. Drawing the correlations between Bitcoin and the top 30 cryptocurrencies in the market today, we find that (58% of cryptocurrencies show correlations that are higher than 60% against Bitcoin in such periods.

The most notable currencies correlated with Bitcoin are Ether (ETH), Dash, Bitcoin Cash (BCH), Monero (XMR) and EOS with correlations between 74% and 82%. On the other side, USD Coin (USDC) has the lowest correlation from all currencies, with a negative relationship (-4.3%), followed by HedgeTrade (HEDG) with a 13.3% correlation.

Currencies like Chainlink (LINK), Cosmos (ATOM), Crypto.com Chain (CRO) and Huobi Token (HT) also show a low correlation with Bitcoin – between 20% and 30% - during this period. 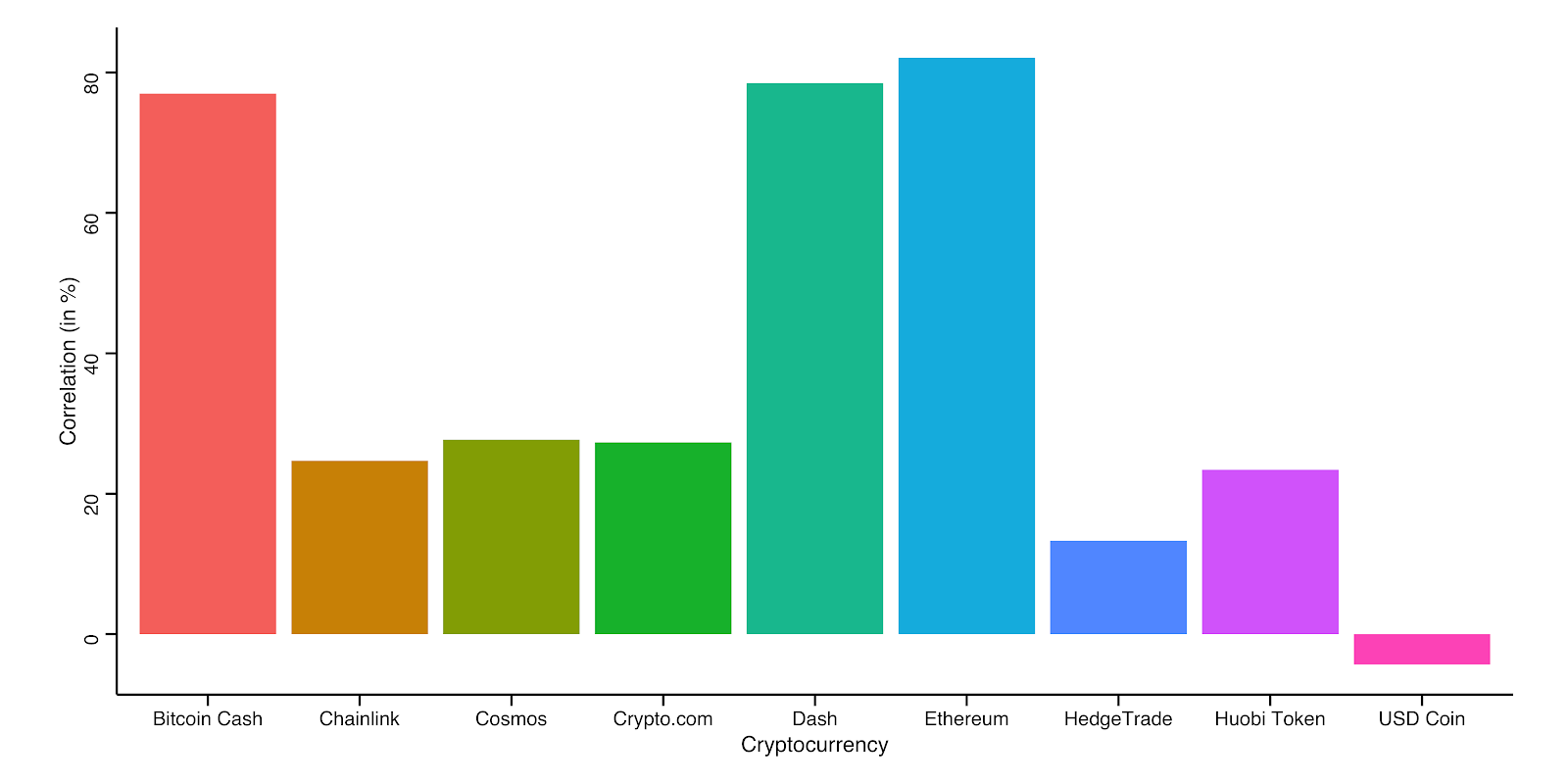 Correlation between Bitcoin and altcoins from April-June 2019.

During altcoins bullish periods like the one observed between December 2018 and March 2019, the correlations between the top currencies and Bitcoin are stronger across all cases except for USD Coin, which is slightly more negative than during Bitcoin’s bullish period (-7.8%).

However, 77% of the top currencies correlate at more than 60% with Bitcoin and Monero is the highest correlated at 92.3%. Furthermore, Dash, EOS, Ethereum, XRP and ZCash (ZEC) are all correlated with Bitcoin above 87%. 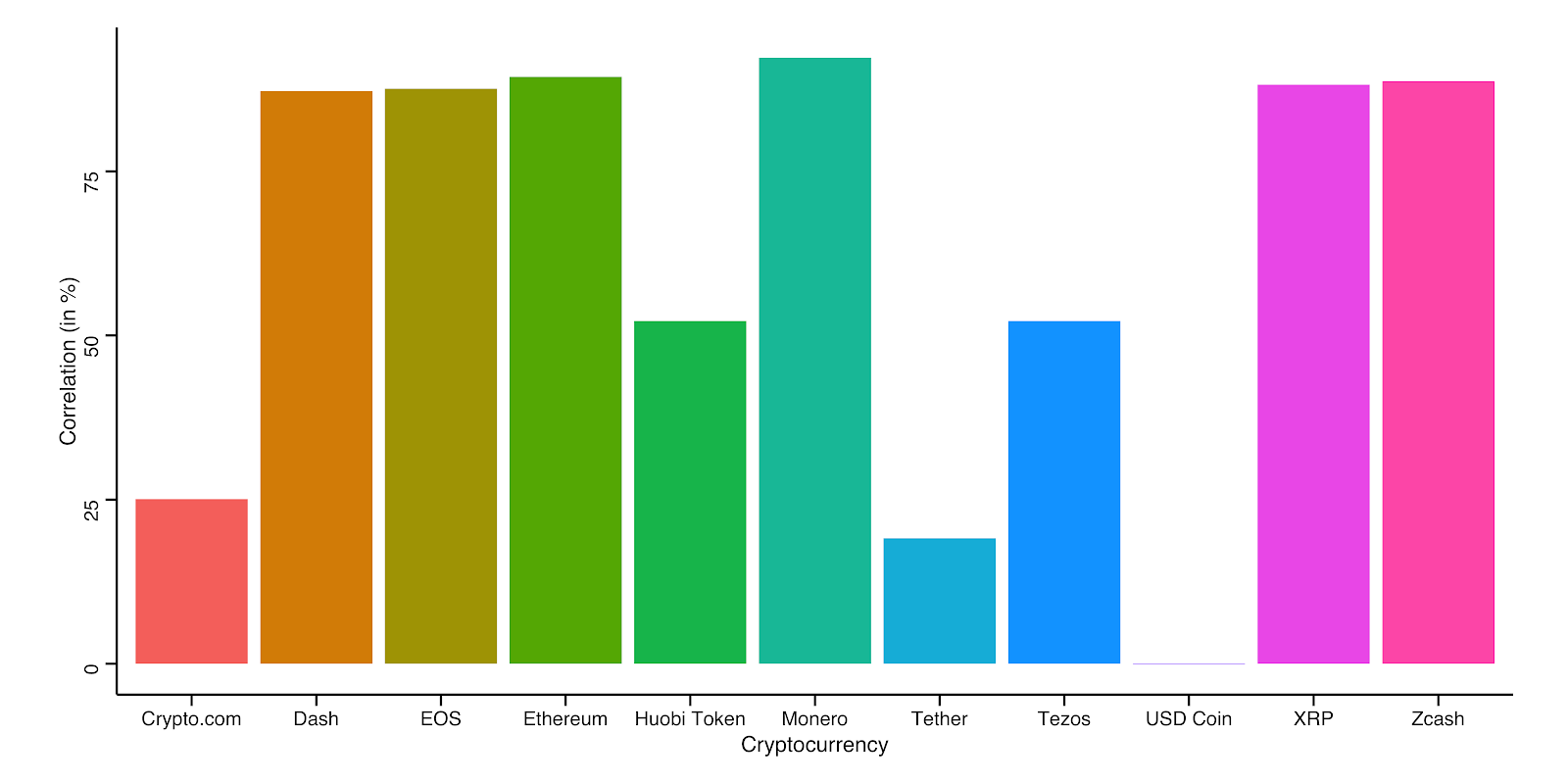 Correlation between Bitcoin and altcoins between December 2018 and March 2019.

2020 started with volatile behavior – what’s ahead?

Bitcoin has signaled that a bullish scenario could play out throughout 2020 and since the start of 2020 the digital asset has gained more than 35%. During this period, consistently high correlations are seen as was previously the case with large-cap altcoins such as Bitcoin Cash, Ethereum, Litecoin (LTC), NEO, TRON (TRX) and XRP.

On the low correlation side, both USD Coin and Cosmos show consistent results between the last bullish period and the start of 2020.

However, Chainlink, Crypto.com, HedgeTrade, Huobi Token and Dash now show conflicting correlations with Bitcoin between the last bullish period and this prevents one from concluding that there is any consistent behavior between these currencies and Bitcoin. 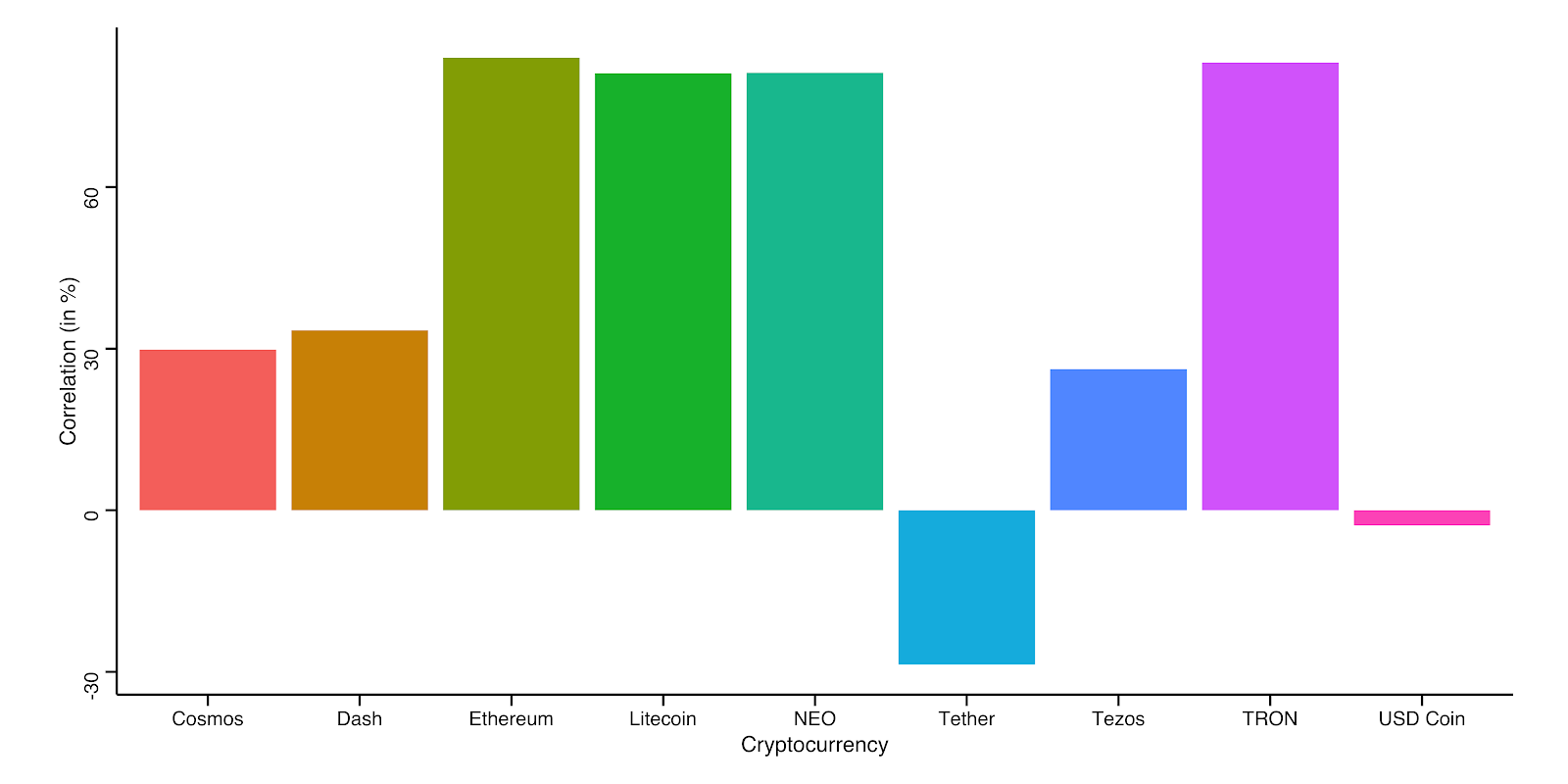 Under Bitcoin and altcoins bullish scenarios, stable coins show the lowest correlation with Bitcoin, while larger currencies such as Ethereum, Litecoin, Bitcoin Cash, NEO, Monero and XRP are always highly correlated with Bitcoin’s behavior. Nevertheless, the altcoins studied in this article are much more correlated with Bitcoin when a bullish altcoin period occurs in comparison to when Bitcoin’s price action is bullish.

Looking forward, if a new Bitcoin bullish period begins, investors may consider these altcoins as the ones to accumulate as they offer higher upside potential. Furthermore, investors who only purchase Bitcoin might adopt a more conservative approach and hedge the riskier Bitcoin investment with a larger allocation into stable coins or currencies that show a lower correlation with Bitcoin during these periods.