Ethereum co-founder and ConsenSys Inc. CEO Joseph Lubin said in an interview with Bloomberg Aug. 14, that he does not see the recent cryptocurrency price collapse as a constraint to further growth.

In а recent discussion on the state of the cryptocurrency market with Bloomberg, Lubin said that the value surges of the past year were just another bubble like the previous “six big bubbles, each more epic than the previous one, and each bubble is astonishing when they’re happening.”

He added that on close scrutiny those peaks look like “pimples on a chart.” Lubin said that each bubble, such as the current one, has brought a significant burst of activity. He stated:

“...we build more fundamental infrastructure, we see a correction, and the potential gets even more impressive… I absolutely expect that there is a strong correlation between the rise in price and the growth of fundamental infrastructure in the ecosystem and the growth of development in the ecosystem. We are probably two orders of magnitude bigger as a developer community than we were eight or 10 months ago.”

Lubin attributed volatility to “trader types,” i.e. speculative investors, saying that it is not necessarily an indicator of underlying infrastructure enhancement. When asked about how the price volatility affects him, Lubin answered:

“So we can look at the price and make growth plans and projections, and we’re still on track, basically. So this is not unexpected.”

Yesterday, Ethereum (ETH) dropped to a 9-month price low, and was trading at $288. The last time the altcoin fell below the $300 price point was in early November, 2017. This morning losses expanded to 16 percent on the day and almost 35 percent over the last week.

Currently, ETH is trading around $263, down 7 percent on the day, with a market capitalization over $26 billion. 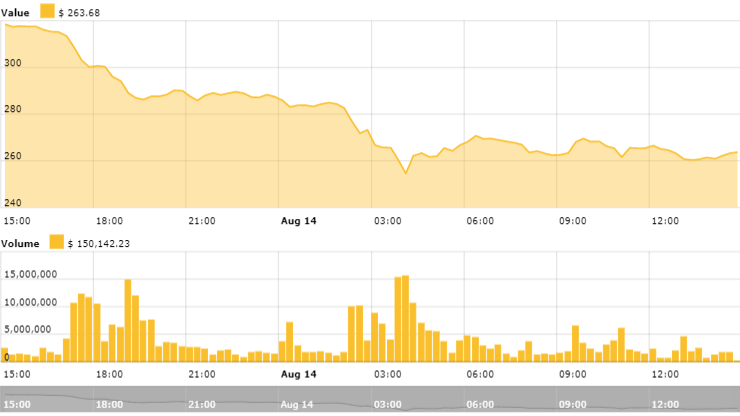