Law Enforcement Requests to Kraken Hit All-Time-High, Up 49% in 2019

Law enforcement requests to cryptocurrency exchange Kraken hit their highest ever volume in 2019, rising 49% to 710 as compared with 475 the previous year.

Law enforcement requests to cryptocurrency exchange Kraken hit their highest ever volume in 2019, rising 49% to 710 as compared with 475 the previous year.

The data was revealed in a tweet from the exchange on Jan. 6, which included a snapshot taken from the new 2019 Transparency Report from Kraken’s compliance team. 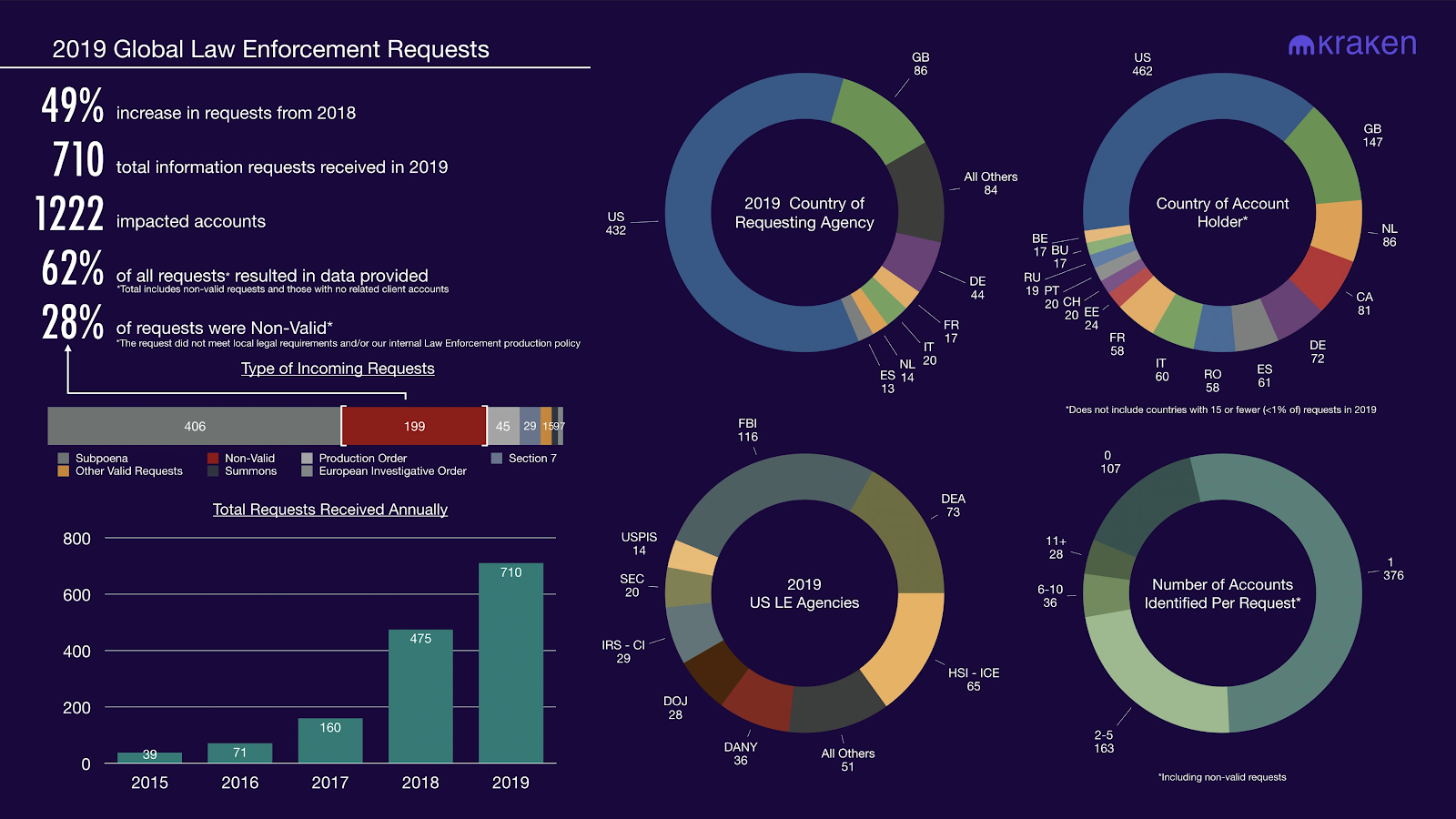 American, British and Danish agencies the most proactive

As the snapshot reveals, Kraken received a total of 710 information requests from global law enforcement agencies in 2019, marking a sharp increase as compared with both 475 in 2018 and 160 in 2017.

The lion’s share of these requests — 61% — were from United States agencies, slightly down from 66% in 2018. In its tweet, Kraken noted that even while the U.S. remains ahead of other countries, “other geos are gaining fast.”

Noting the overall uptick in requests globally, the exchange team added: “trend is obvious. [Compliance] costs are increasing [for cryptocurrency exchanges], even in a relatively flat market.”

Following the U.S., agencies from the United Kingdom and Denmark intervened to issue the most information requests from the exchange — these top three countries each significantly outstripping agencies in other global jurisdictions, as Kraken’s data visualization indicates.

Within the U.S., the FBI accounted for the highest number of requests, 116, followed by the Drug Enforcement Administration, with 73, and Homeland Security Investigations together with Immigration and Customs Enforcement, at 65.

Two agencies closely watched by members of the cryptocurrency community — the Securities and Exchange Commission and the Internal Revenue Service — issued 20 and 29 information requests in 2019 respectively.

Globally, 1,222 Kraken accounts were implicated in law enforcement’s data requests, and 62% of all requests resulted in data being handed over to the authorities. Kraken reveals that almost a third — 28% — of all law enforcement requests were deemed invalid, i.e. did not meet the exchange’s law enforcement production policy or local legal requirements.

One year ago, Cointelegraph reported on Kraken’s Transparency Report 2018, which had indicated a three-fold uptick in information requests as compared with the previous year and similarly revealed that agencies in the U.S. and the U.K. were the most interventionist globally.

A Transparency Report released by Switzerland-based cryptocurrency exchange ShapeShift in January 2019 revealed that it too saw a significant increase in requests from law enforcement, with a 175% surge in the second half of 2018.

At the time, Shapeshift outlined that it typically receives requests for data including crypto addresses (in or out of the Shapeshift system), transaction IDs, identity information (names, emails, IP addresses), and cryptocurrency or crypto-asset information.