Cryptocurrency exchange Kraken has received nearly three times more law enforcement inquiries in 2018 than in 2017, the exhange reported in a tweet Jan. 5.

According to data displayed in the weet, in 2018 the exchange received 475 law enforcement inquiries from global government agencies, while in 2017 there had been only 160. Still, 2017 numbers were already considerably higher than the previous year, when there were only 71 inquires.

The tweet further highlighted the prevalence of United States agencies among the inquiries, stating “you can see why many businesses choose to block US users.” The exchange reported that 315 of the 475 inquiries in 2018 came from U.S. government bodies. 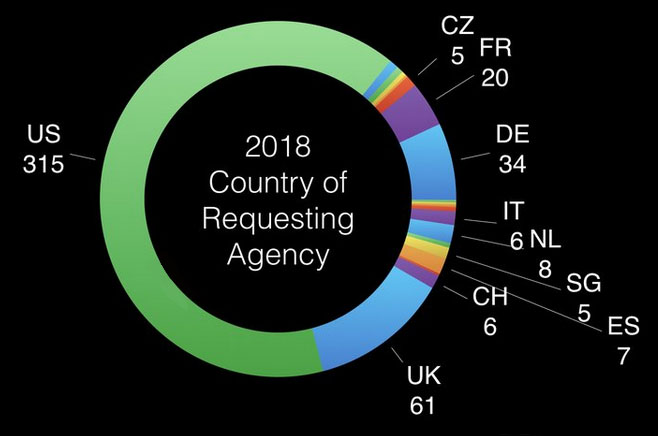 As Cointelegraph reported at the beginning of December, Florida-based United American Corp. (UnitedCorp) has purportedly filed a lawsuit against Bitmain, Bitcoin.com, Roger Ver, and Kraken.

The suit filed alleges that the defendants jointly used unfair methods and practices to manipulate the Bitcoin Cash (BCH) network for their benefit and detriment of UnitedCorp and other BCH stakeholders.

Also in December, Japanese police reported that there has been a significant uptick in reports from cryptocurrency exchanges about suspicious transactions. The increase reports occured after a bill came into force obliging the exchange to report such activity.