LocalBitcoins: Tor Browser Users at Risk of Losing Their Bitcoins

On Sept. 9, transactional compliance expert Richard Bensberg tweeted a screenshot of a LocalBitcoins banner warning Tor users about the risk of losing their Bitcoins (BTC), which stated:

“Warning to all Tor users: A Tor browser exposes you to the risk of having your bitcoins stolen.”

LocalBitcoins then responded to Bensberg, saying that while using Tor Browser is not against its terms of service, it does not recommend it for security reasons. LocalBitcoins did not specify why the browser makes users more vulnerable to theft.

Bensberg criticized the move by the exchange, arguing that Localbitcoins has “really lost the plot” by putting a banner warning against the browsing tool praised for providing privacy and anonymity. 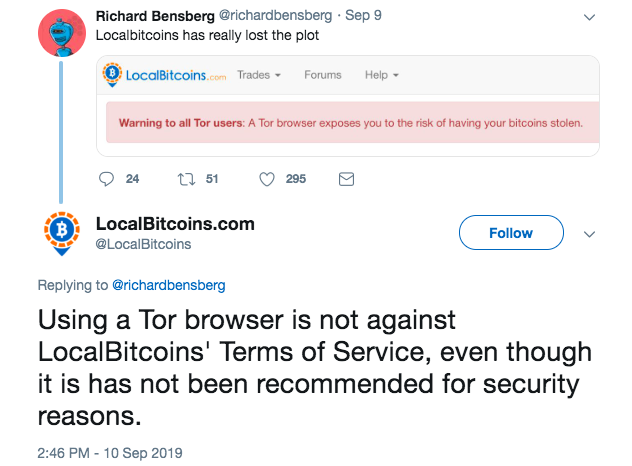 Tor Browser is the flagship product of the Tor Project, the firm behind the anonymous Tor network. In July 2019, Cointelegraph reported that the Tor Project’s crowdfunding campaign BitcoinForTor reached its $10,000 softcap just 25 hours after launch.

The two-week campaign eventually raised $18,892 in order to support its goals of privacy and freedom online. Tor has many proponents, including famous National Security Agency leaker Edward Snowden.

Meanwhile, LocalBitcoins has seen a notable drop in trading volumes after the exchange abruptly terminated the option for users to perform local cash trades in early June. On June 18, LocalBitcoins continued to tighten policies, introducing four different account tiers within its new verification system, which puts limits for selling Bitcoin and posting ads on its platform.