Bitcoin and altcoins could remain range-bound for a few days as traders search for triggers that will start the next trending move.

Crypto prices may be in a rut but that doesn’t mean product development and acquisitions cease to occur. This week Japanese financial firm SBI Holdings acquired a 100% stake in TaoTao cryptocurrency exchange.

While countries like China and South Korea have not fully embraced digital currencies, they are racing ahead in testing the feasibility of a central bank digital currency. The South Korean central bank recently announced that it will start the final build and distribution phase of the CBDC pilot scheme next year. However, the central bank has not revealed any plans to launch the CBDC yet.

In other news, the United Kingdom’s Financial Conduct Authority believes that retail traders could lose money if they trade in cryptocurrency derivatives products and exchange-traded notes. Therefore, the regulator has banned these products for retail consumers.

At the moment, it seems that negative news is dominating the crypto sector and prices, along with investor sentiment is suffering as a result. One positive is, with depressed prices at least comes the opportunity to open new long positions.

Let’s take a look at the charts to see what opportunities exist.

Bitcoin (BTC) is currently stuck in a tight range as seen from the narrowing of the Bollinger Bands. Previous instances of similar tightening resulted in strong trending moves. There was an up-move toward the end of July, and a downside break in early September. 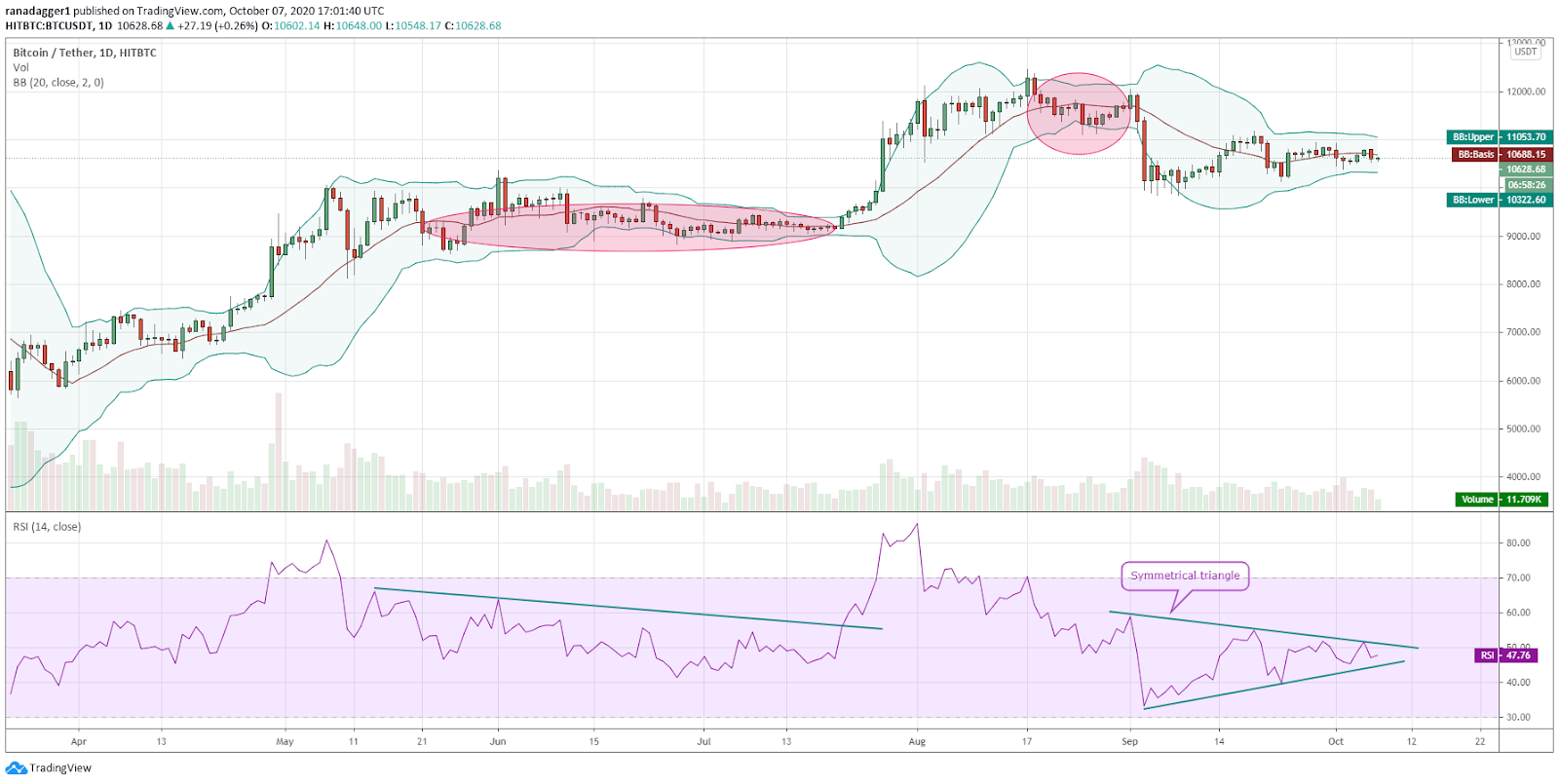 Although it is difficult to predict the direction of the breakout from the Bollinger bands, the relative strength index may provide some insight as it is considered a leading indicator for anticipating price movements.

Currently, the RSI is in a symmetrical triangle, which shows indecision among the bulls and the bears. If the RSI breaks and sustains above the triangle, it will signal a possible breakout in the price above $11,200.

Conversely, if the RSI breaks and sustains below the symmetrical triangle, it will increase the likelihood of a retest of the critical support at $9,835.

Ether (ETH) again turned down from the middle band, which is the 20-day simple moving average. This suggests that the bears are selling on relief rallies to this resistance level. 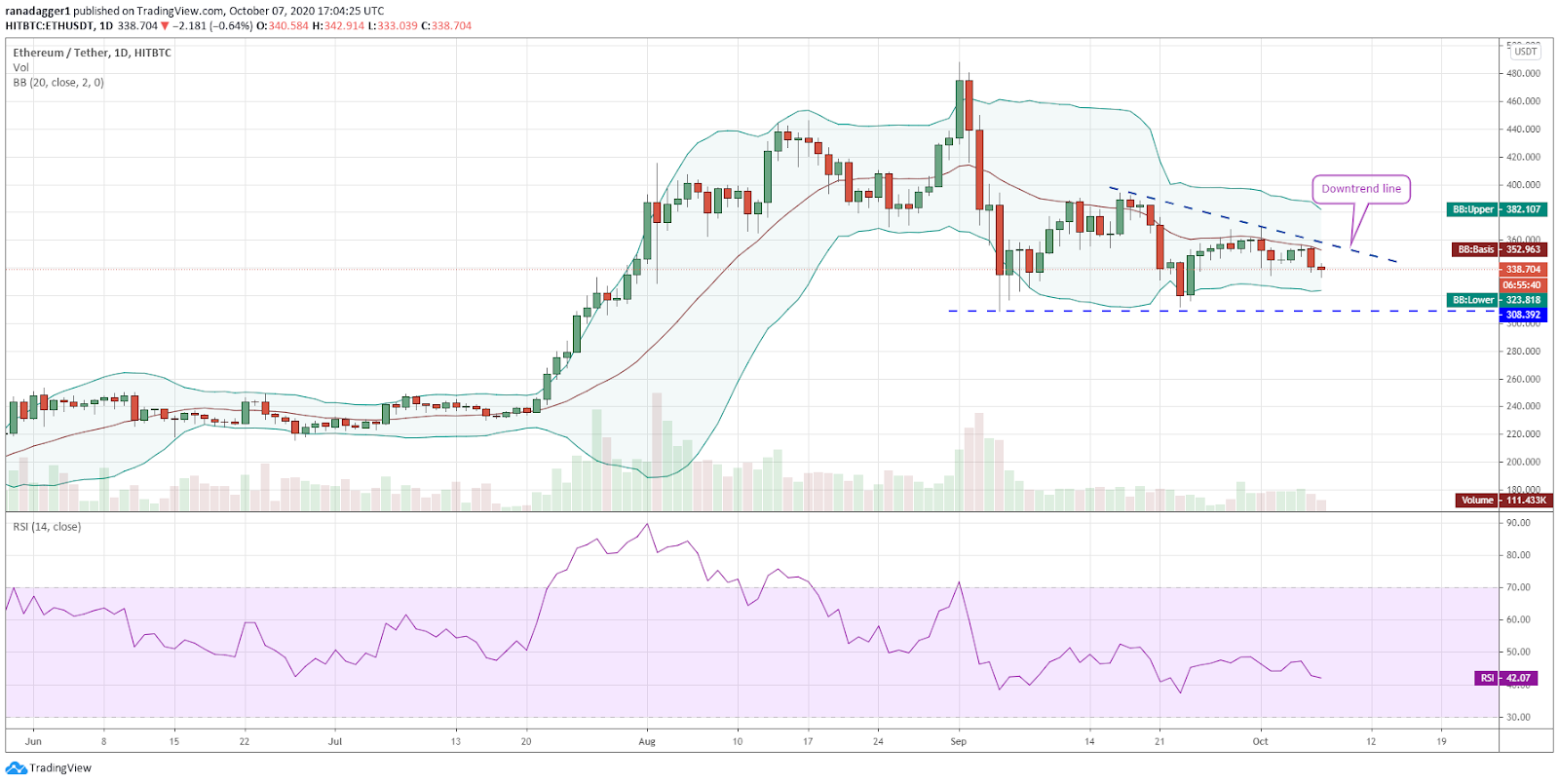 If the bears sink the price below the lower band and the critical support at $308.392, the ETH/USD pair could start a downtrend that may result in a fall to $240. The RSI has been trading below the 50 level for the past few days, which shows advantage to the bears.

However, the lower band is currently flat and the bulls are likely to buy a dip to this support. The first sign of strength will be a break and close (UTC time) above the downtrend line. A break above the upper band may signal the resumption of the uptrend. 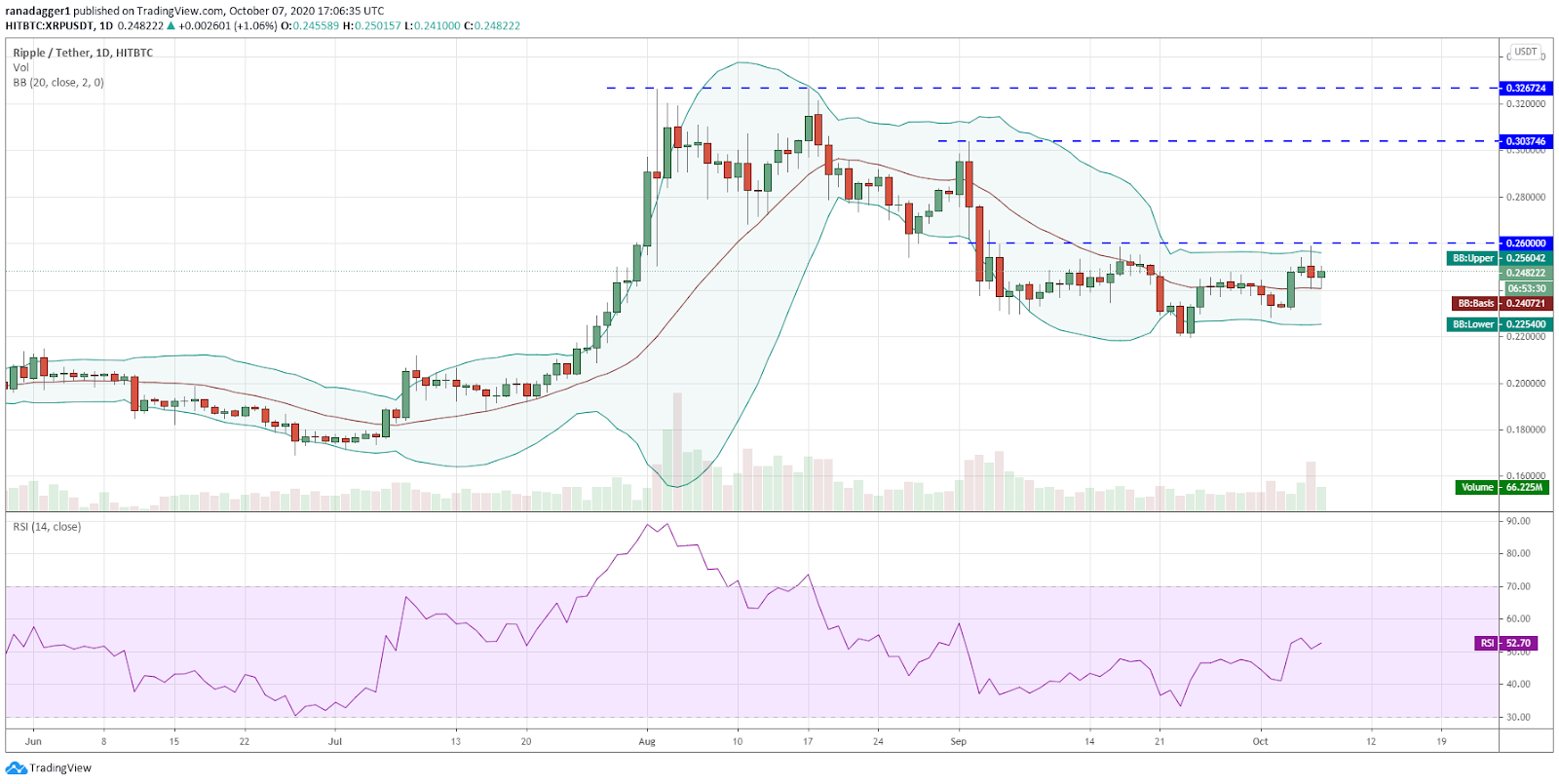 The bands are currently flat and the RSI has risen into positive territory, which suggests that selling pressure has reduced and a few days of range-bound action is likely.

Barring the period between July 25-Sep. 3, Bitcoin Cash (BCH) has largely remained range-bound since April. The narrowing Bollinger Bands suggest that the price is again stuck in a tight range. 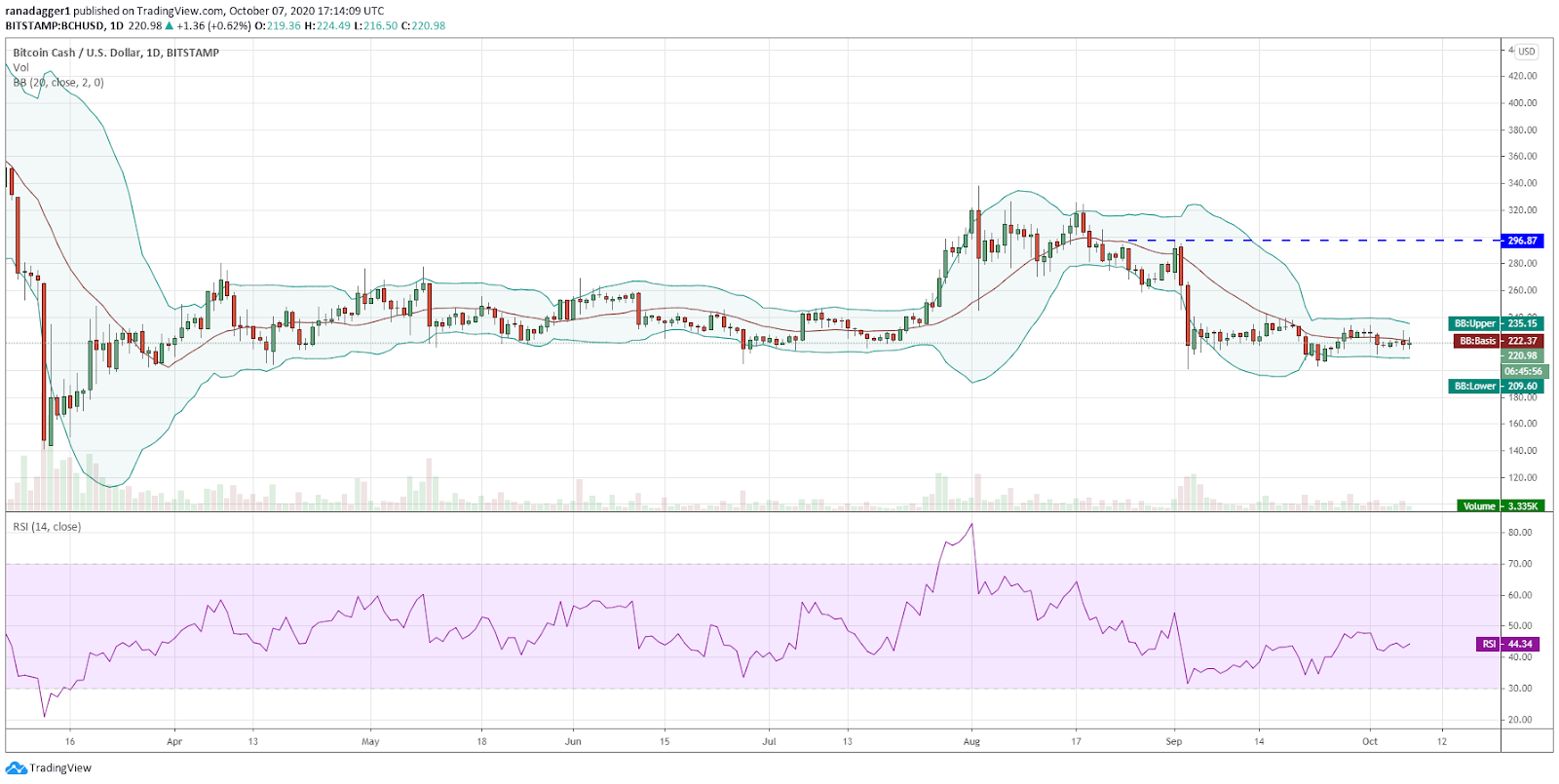 The bulls pushed the price above the middle band on Oct. 6 but they could not sustain the higher levels and the price again dipped back into the lower half of the Bollinger Bands.

The RSI has been trading below the 50 level for the past few days, which suggests that the bears have the upper hand. If the bears can sink the price below the lower band at $209 and the long-term support at $200, a downtrend to $140 is possible.

This negative view will be invalidated if the bulls can push the price above the upper band at $235 and the overhead resistance at $242. Above this level, the BCH/USD pair could rally to $296.87.

Binance Coin (BNB) turned down from just below the $29.5646 resistance on Oct. 5, which suggests that the bears are selling on rallies. However, a positive sign is that the bulls are buying the dips to the middle band at $26.68. 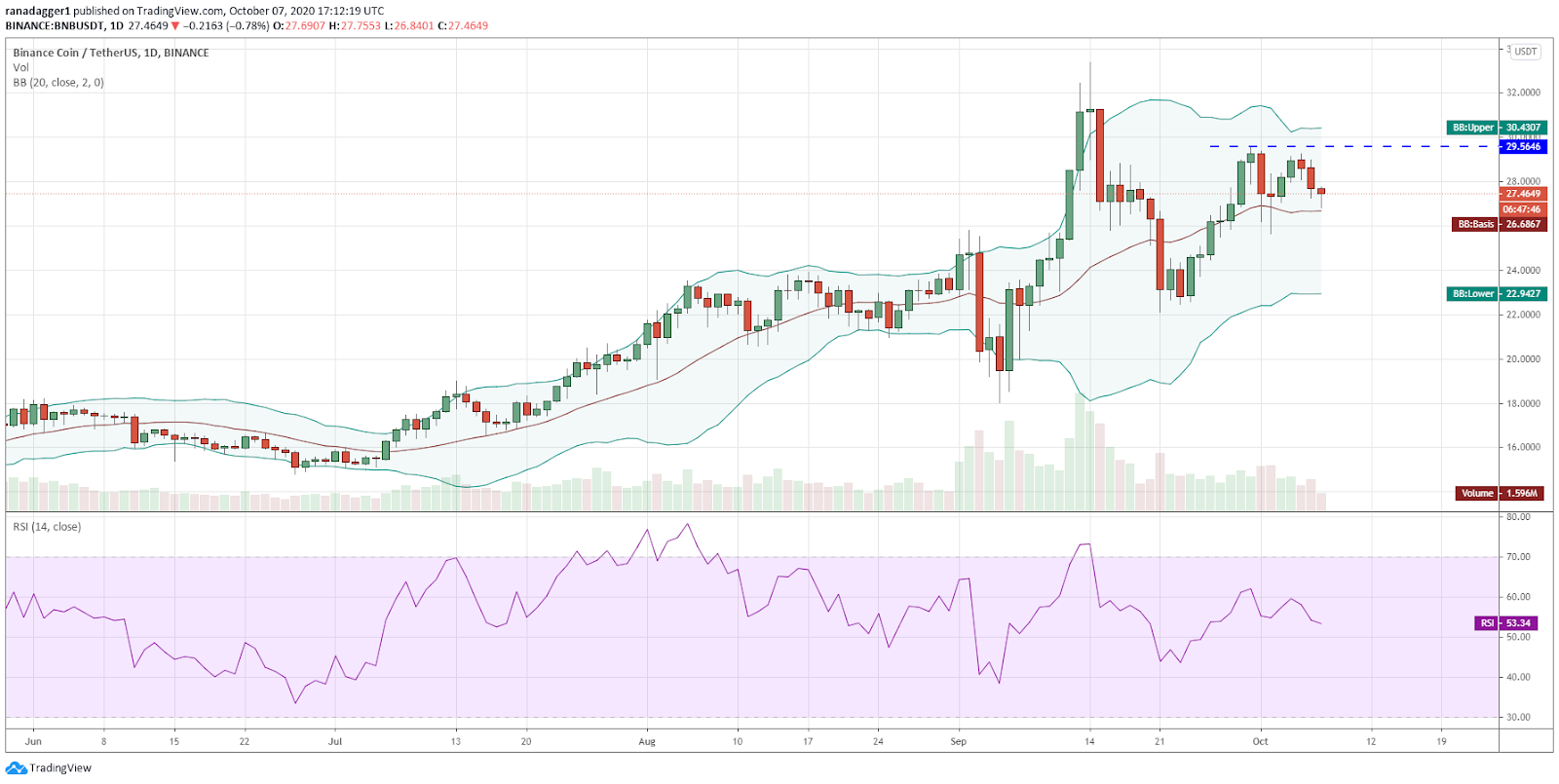 The flattening of the Bollinger Bands and the RSI near the midpoint suggests further consolidation for the next few days.

If the BNB/USD pair rebounds off the current levels, the bulls will make one more attempt to break above the $29.5646 resistance and the upper band at $30.43. If they succeed, it could suggest the resumption of the uptrend with the first target at $33.3888 and above it $39.

Contrary to this assumption, if the bears sink the price below the middle band, a drop to the lower band at $22.94 is possible.

Polkadot (DOT) turned down sharply on Oct. 7 and has dropped close to the critical support at $3.5321. The bulls are currently attempting to buy the drop to the lower band at $3.61. 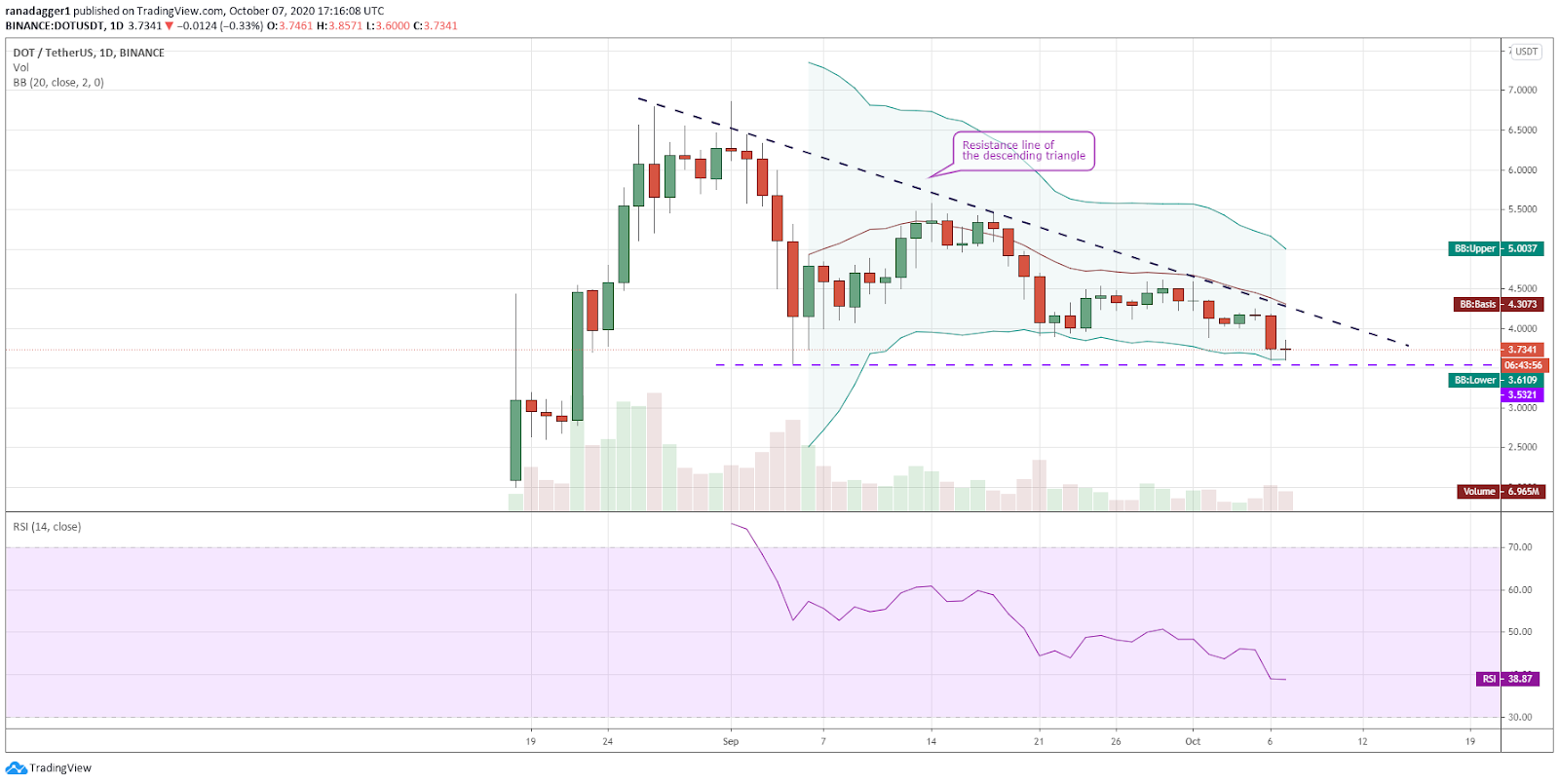 However, if the bulls fail to push the price above the resistance line within the next few days, the bears will make one more attempt to sink the DOT/USD pair below $3.5321. If they succeed, the pair will complete the descending triangle.

Although the pattern target of the bearish setup is much lower, the bulls will try to arrest the decline at $2.60 and below it at $2.

The price has been trading in the lower half of the Bollinger Bands for the past few days and the RSI has dropped close to 39, which suggests that the path of least resistance is to the downside.

This bearish view will be invalidated if the pair rises from the current levels and breaks above the resistance line.

Chainlink (LINK) turned down from the middle band on Oct. 6 and that has kept the price in the lower half of the Bollinger Bands. The RSI has been trading in the negative zone for the past few days, which suggests that the advantage is with the bears. 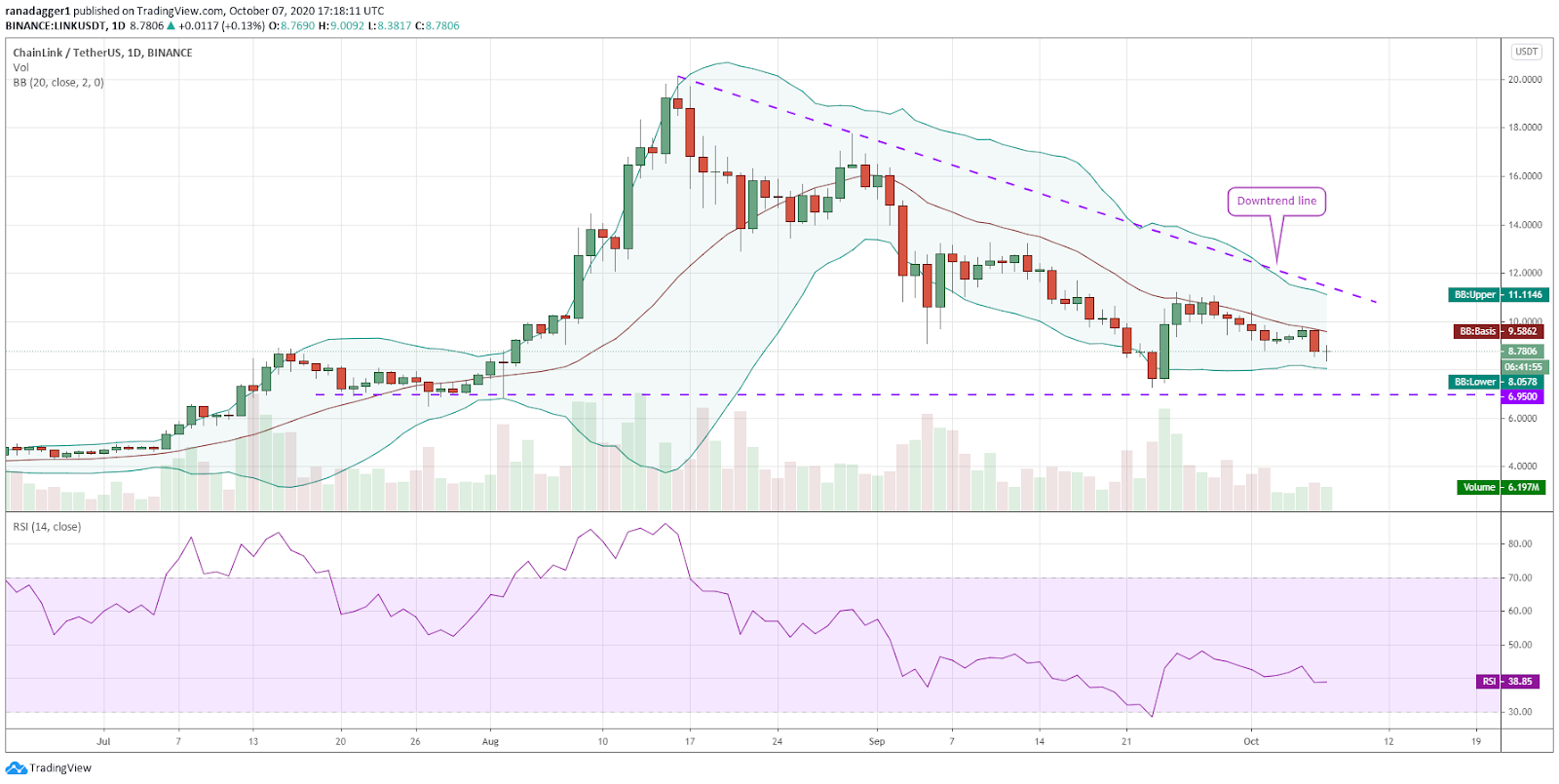 The bears will now try to sink the LINK/USD pair below the lower band at $8.05 and the critical support at $6.95. If they succeed, the downtrend could extend to the next support at $4.30.

However, the bulls are currently attempting to defend the lower band. If they can push and sustain the price above the middle band, it will suggest that the selling pressure has reduced.

The lower band is flat and the width of the bands is narrowing gradually, which suggests that the pair could enter a period of consolidation.

The Bollinger Bands are narrowing and the RSI has risen close to the center, which suggests that Litecoin (LTC) could consolidate in a tight range for a few days. The altcoin could oscillate between the upper and the lower band during this period. 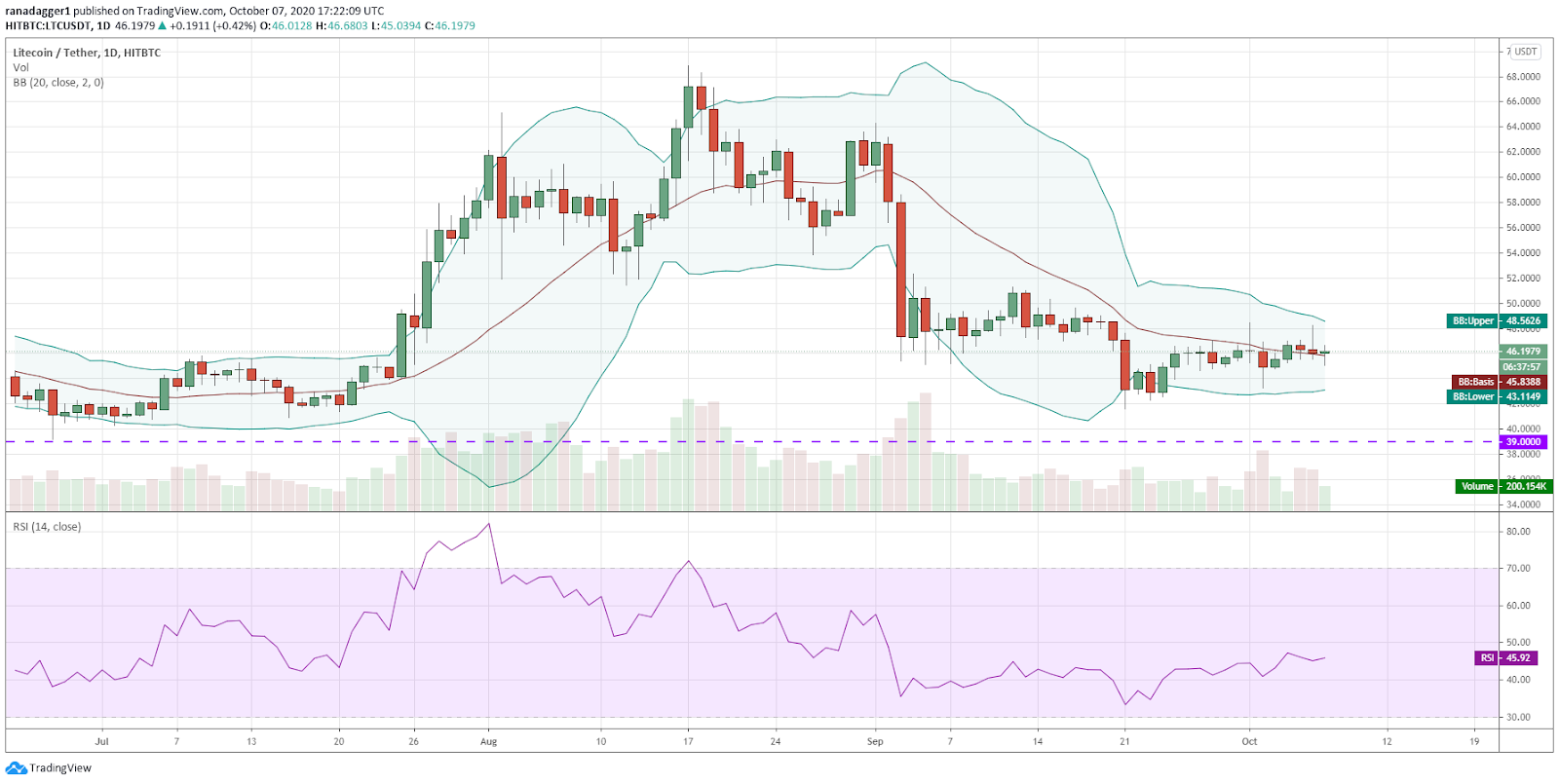 This neutral view will be invalidated if the bulls can push and sustain the price above the upper band at $48.56. Such a move could result in a move to $52.50, where the bulls are likely to face stiff resistance.

However, if the bulls can push the price above $52.50, the uptrend could pick up momentum and rally to $64.

The trend will turn in favor of the bears if they can sink the LTC/USD pair below the lower band at $43.11 and the critical support at $39.

Crypto.com Coin (CRO) rebounded off the $0.144743 support and turned down from $0.149853 on Oct. 6. This signals a lack of demand at these levels because the bulls are not confident that the correction is over. 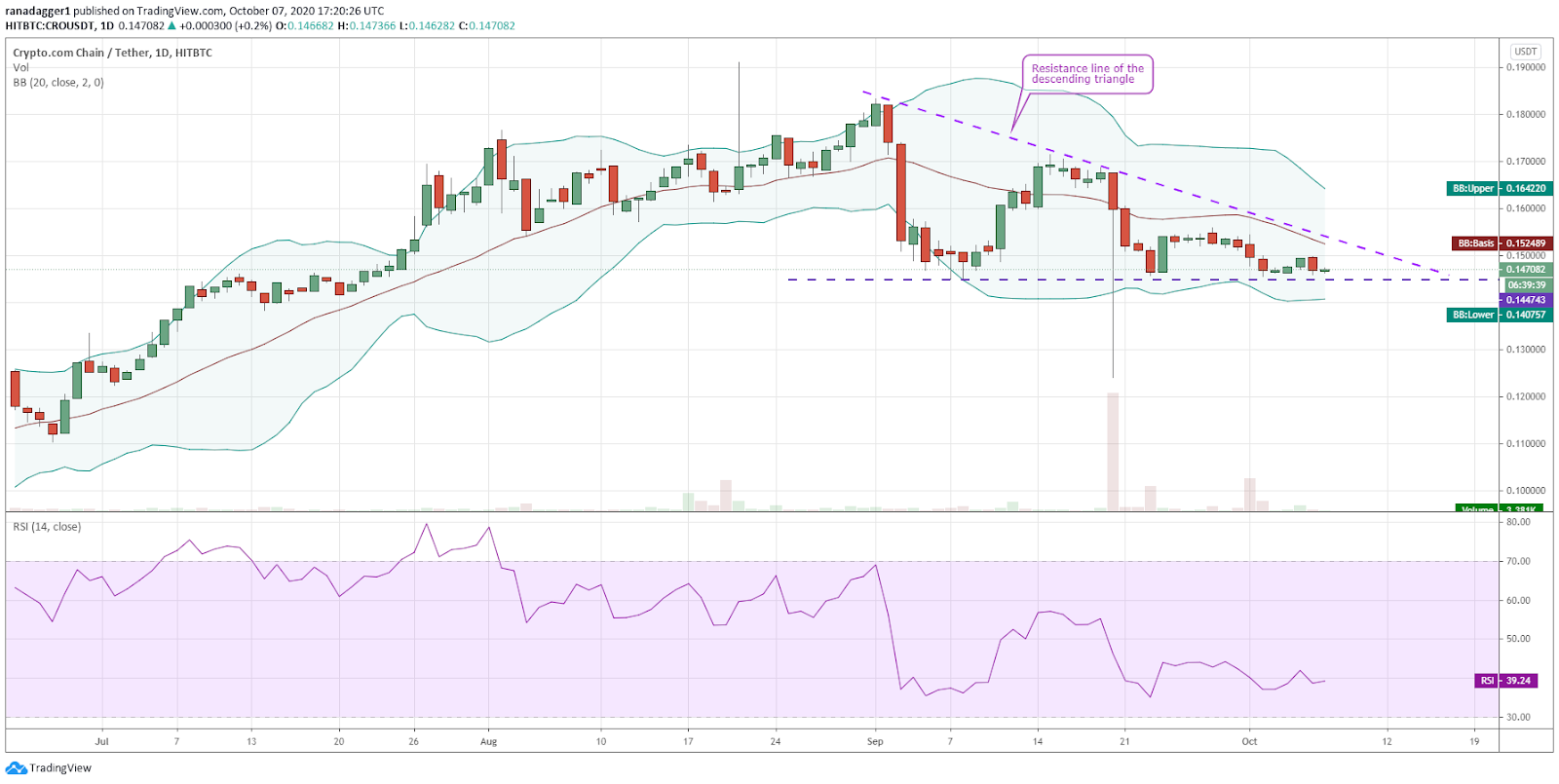 The lower band is flat and is placed just below the critical support at $0.144743. The bears will have to break below the lower band at $0.140 to intensify the selling and complete a descending triangle that has a target objective of $0.10607.

This view will be invalidated if the CRO/USD pair rises from the current levels or rebounds off the lower band and breaks above the resistance line of the descending triangle. Above this level, a move to the upper hand at $0.164 is possible.

The upper and lower bands are flat and the RSI is close to the midpoint, which shows that Bitcoin SV (BSV) is range-bound and is likely to remain so until the bulls push the price above $180 or the bears sink the price below $143. 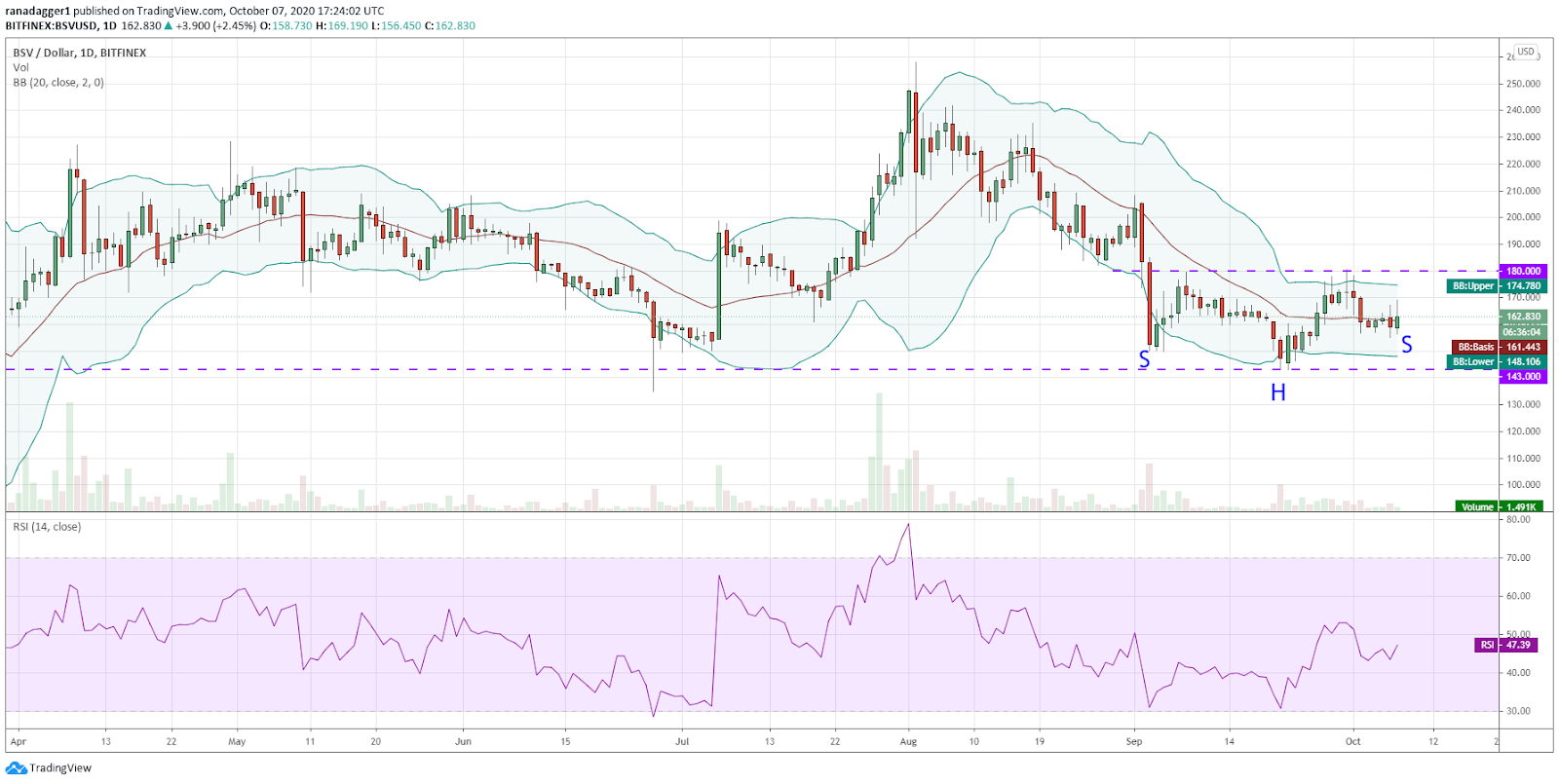 The price action of the past few days has formed an inverse head and shoulders pattern that will complete on a breakout and close (UTC time) above $180.

If that happens, the BSV/USD pair could start a move to the pattern target of $217. Above this level, the uptrend could extend to $235.

On the downside, a break below the critical support zone of $143–$135 could intensify the selling and result in a drop to $100.