Satoshi Posers — Why So Many Takers for the Bitcoin Crown?

A number of people have filed copyright claims to the Bitcoin white paper in an effort to prove they are Satoshi Nakamoto.

The real identity of Bitcoin’s founder, Satoshi Nakamoto, has been a mystery since the inception of the preeminent cryptocurrency over a decade ago.

Over the last 10 years, various people have claimed to be the mysterious Satoshi, but their assertions have always been met with skepticism and have lacked any substantial evidence to prove the point.

This has seemingly come to a head over the last couple of months, as a number of people have gone a step further than claiming to be Bitcoin’s founder by filing copyright and trademark claims to the original Bitcoin white paper and the early code that birthed the cryptocurrency.

Cointelegraph explores the latest claims to the proverbial crypto’s Iron Throne and the possible reasons why people are trying to declare ownership of the open-source, decentralized cryptocurrency. 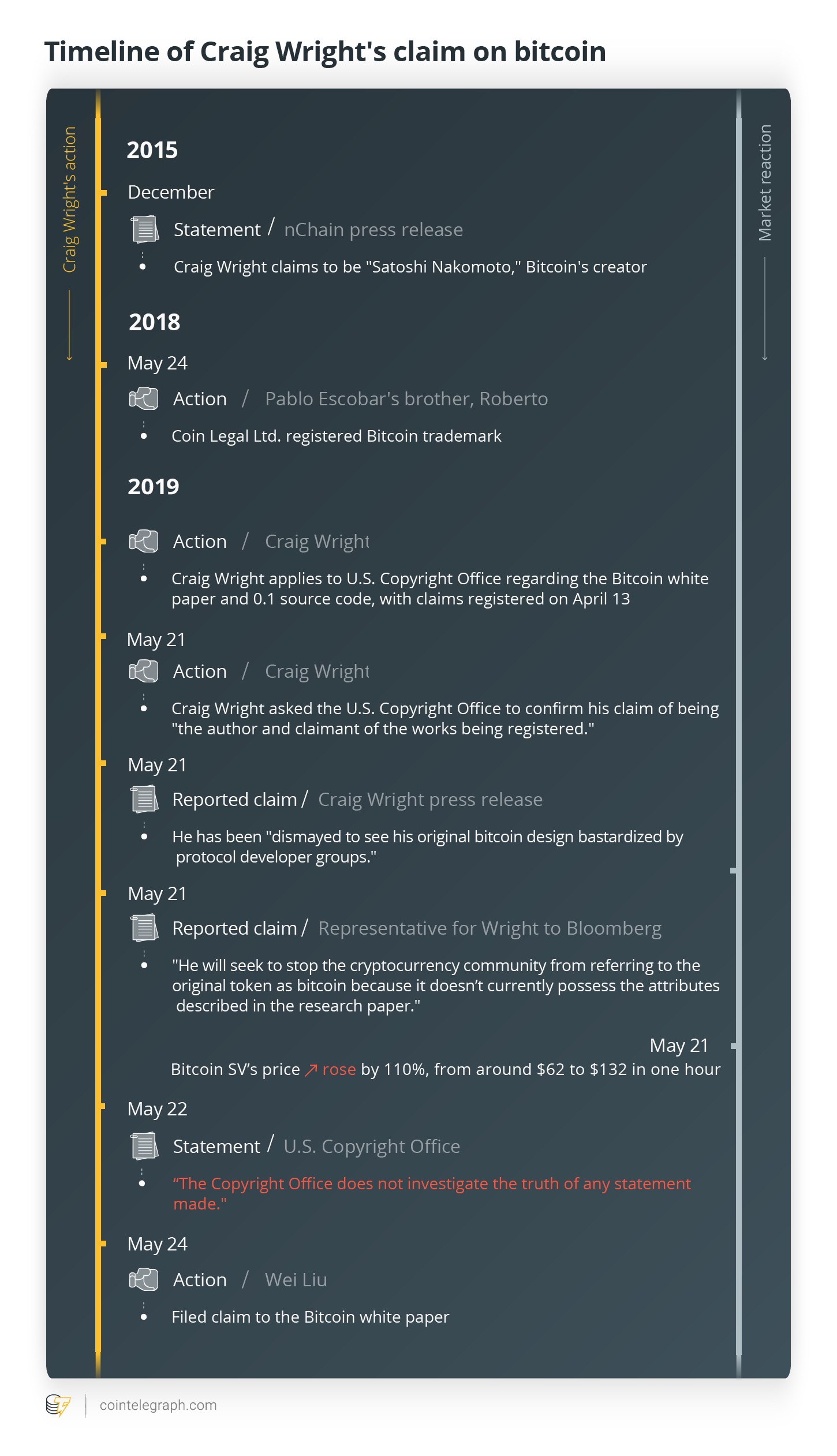 Australian businessman Craig Wright has long been a divisive figure in the cryptocurrency community, having claimed to be Satoshi Nakamoto from 2015 onward. His claims have surged in 2019, and Wright has gone to great lengths to try to prove his point, even suing the likes of bitcoin cash proponent Roger Ver and well-known crypto podcaster Peter McCormack for libel — after they’d vocally questioned his claims on social media.

Wright’s latest efforts to “prove” that he is Satoshi culminated in his legal representatives filing a copyright claim to the Bitcoin white paper as well as the early code for the protocol on May 21.

The United States Copyright Office received Wright’s registration as the author of Bitcoin’s white paper, but the news was met with heavy criticism from a variety of industry commentators and experts.

There has been plenty of speculation about the motives behind Wright’s claims. Nevertheless, there is no way of downplaying his link to Bitcoin SV (Satoshi’s Vision). Wright is the founder of nChain, the company that developed Bitcoin SV — and the cryptocurrency saw a huge price surge the week that Wright filed his copyright claims.

As cryptocurrency author David Gerard told Cointelegraph last week, Wright’s claims are nothing more than that. The U.S. Copyright Office does not check the validity of any statement or claim made to a copyright.

As per its official press release following Wright’s claim, the U.S. Copyright Office essentially admitted that it did not check any of the facts, it merely accepted the claim on the assumption of the validity of supporting documentation. The press release said:

Furthermore, the U.S. Copyright Office conceded that more than one claim to a copyright can be registered, which is currently the case:

“A registration represents a claim to an interest in a work protected by copyright law, not a determination of the truth of the claims therein. It is possible for multiple, adverse claims to be registered at the Copyright Office.”

Wei Liu puts his hand up

Just days after Wright copyright claim was registered in the U.S., a Chinese citizen named Wei Liu filed his own claim to the Bitcoin white paper on May 24.

According to various news outlets, Liu is the current CEO of cryptocurrency market research firm Coinsummer. He was quoted as saying that he filed his very own copyright claim to prove a point that anyone can claim the copyright to the Bitcoin white paper.

The news was met with relative fanfare on social media, as cryptocurrency enthusiasts celebrated the satirical nature of the second copyright registration.

Further efforts by Cointelegraph to ascertain more details about Liu’s identity and whereabouts, as well as the accuracy of other reports, have come up empty handed. This also raises questions about the accuracy of varying reports, with some publications calling Liu a man and others saying the Chinese citizen is a woman, while there are differing reports of Liu’s previous and current employment situation.

In an even stranger twist, there have been numerous reports that a company linked to the family of the late Colombian drug lord Pablo Escobar had, at one point, the trademark for Bitcoin.

According to documents from the U.S. Patent and Trademark Office, a company called Coin Legal Ltd. had registered the Bitcoin trademark in July 2018. A quick search of United Kingdom companies registered online shows the company has a sole director, Olof Kyros Gustafsson.

According to Gustafsson’s Twitter profile, the Sweidsh national is also the CEO of Escobar Incorporated. While other publications have claimed that the brother of Pablo Escobar, Roberto de Jesús Escobar Gaviria is the signatory of the trademark filing last year, investigations by Cointelegraph could not verify the veracity of those claims.

Coin Legal’s company details only list Gustafsson as the sole director of the company — there is no mention of Escobar Gaviria. However, the Escobar Incorporated website lists Roberto Escobar as the founder of Coin Legal.

The history page of the website claims that Roberto Escobar established the general holding company for assets and value protection.

It must be noted that a search of the U.S. Patent and Trademark database shows a number of filings for the Bitcoin trademark over the past two years. With so many claims to the trademark as well as the copyright to the Bitcoin white paper and code, it becomes increasingly difficult to pin down any proof of ownership. 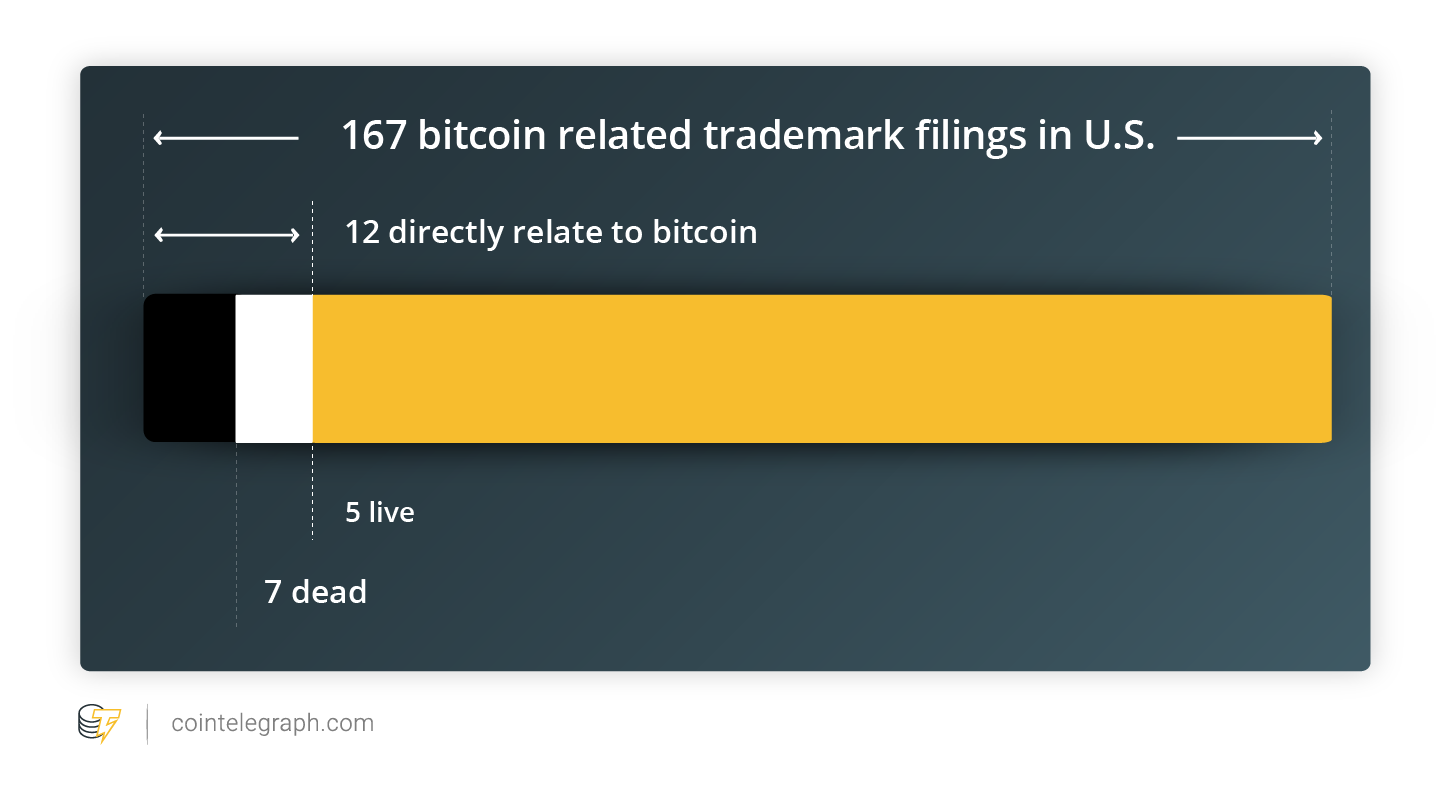 Blurred lines - What are the legalities of a copyright?

First of all, it is important to identify the jurisdiction in which a copyright claim is being made due to various treaties and conventions. Copyright, trademarks and patents in a global context are under the jurisdiction of the World Intellectual Property Organization. In the United States, copyright law is governed by the Lanham Act, also known as the Copyright Act of 1976, which provides the framework for existing copyright law in the country.

An important consideration in the ongoing debate around Bitcoin is whether a copyright registration proves that a specific person is the owner or creator of the work. The important thing here is to highlight the difference between “copyright registration and the granting of a copyright," Rossow added, pointing out that it is common for individuals to confuse the two.

Firstly, under U.S. copyright law, an individual is granted copyright protection for original works they’ve authored in any medium of expression that can be perceived, copied or communicated. Rossow also explained that copyright registration gives the holder a legal reference to use:

The case of Liu registering a second copyright claim on the Bitcoin white paper provides another interest legal scenario. A claim on the copyright could lead to a case of joint authorship if two or more people were responsible for creating a piece of intellectual property in question.

In trying to piece together the reasoning for Wright’s claim to the Bitcoin copyright, Rossow believes there are two possible reasons: Wright could be claiming to indeed be a co-author of the Bitcoin white paper, or he is claiming to be the only author and is therefore claiming infringement of the document.

So, the copyright grants its holder two types of rights: economic and moral. Economic rights allow the holder to receive financial rewards from the use of their works by others. Meanwhile moral rights give authors different means of preserving and protecting the link to their work.

Copyright Office does not validate claims of identity

Perhaps the most telling takeaway from this debacle is the fact that the U.S. Copyright Office does not check if applicants’ claims to a copyright are valid.

This is a problem facing the Copyright Office in modern times, and a scenario like this shines a light on that glaring shortcoming, as Rossow conceded: “It’s not the job for the Copyright Office to determine accuracy — that’s where the legal system and courts come in.” Nevertheless, Rossow maintains that “the value of a copyright is never taken away.”

Overall, the motives of Wright remain a bit of a mystery. Some have speculated that the copyright claim was required to carry out a number of libel lawsuits mentioned earlier in this article.

However, it is worth noting that if Wright was looking to carry out further litigious action, the original copyright needs to have happened in a country that subscribes to an international treaty.

But what makes matters even stranger are the two other trademark claims that have been launched by relatively unknown parties, whose agendas we can only speculate about.

The fact that people with wildly different backgrounds have tried to stake a claim to the Bitcoin copyright and trademark leaves so many unanswered questions.

Are these parties just doing this for personal gain? Is Satoshi really trying to prove his real identity?

Over the past decade, shady characters have been part and parcel of the cryptocurrency community. The initial coin offering rush in 2017 was a good example of how many people rushed into the space to scam unwitting investors to make a quick buck.

These latest claims could be just that. The only thing that will prove otherwise is substantial, undeniable evidence linking these various claimants to Bitcoin. Until that point, the cryptocurrency community will continue to be skeptical of such claims.