According to the research, the creation of competing altcoins is likely to place downward pressure on the prices of all cryptocurrencies.

The creation of competing altcoins is likely to place downward pressure on the prices of all cryptocurrencies, including Bitcoin (BTC). This conclusion was found by research conducted by the Federal Reserve Bank of St. Louis and published on Jan. 11.

The report cites two perspectives: Bitcoin bulls’ belief that the capped supply and increased demand will increase BTC’s price, and the bears’ belief that its price will fall to zero. The researchers state:

“We think the future price path is more likely to remain bounded between these two extremes.” 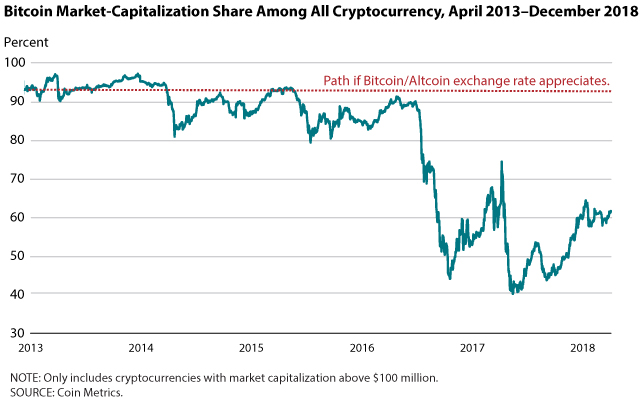 According to the researchers, the chart suggests that the increasing supply of altcoins keeps Bitcoin’s price and market cap depressed. Still, according to the report, Bitcoin has a fundamental value that will prevent its price from falling to zero that derives from demand for its permissionless access and decentralized database. The report concludes:

“While Bitcoin's price is not likely to fall to zero, the prospect of a flood of Altcoin competing with Bitcoin in the wealth portfolios of investors is likely to place significant downward pressure on the purchasing power of all cryptocurrencies, including Bitcoin.”

As Cointelegraph reported today, the number of active Bitcoin (BTC) wallets, many of which have long been dormant, has seen an uptick that could herald some major market movements.

Also recently, news broke that Vinny Lingham, CEO of blockchain identity platform Civic, has revised down his short-term Bitcoin price prediction, stating that the top coin could now fall below $3,000.