Cryptocurrencies have challenges in becoming a major force in the world’s economy, but looking at history, almost every advancement has had similar issues.

From bartering to blockchain, the world of money – and the way we transfer it – has never stood still. Indeed, even the assets we prize have changed. Although it might be nice to have some vegetables in your fridge, using it as a form of currency has probably never crossed your mind.

It’s easy to take financial systems for granted. But every advancement over the centuries has caused some major disruption and a lot of getting used to. With each new system came imperfections and pitfalls – and in some ways, this is good. Cryptocurrencies hold a lot of promise but still face teething problems and challenges. History tells us that this is to be expected, and things can be fixed with patience and a few bright sparks.

Buckle yourselves in. Together, we’re going to take a journey exploring where money transfers began, and how we got to where we are today. Surprisingly, the issues facing crypto right now have been seen throughout the centuries.

We’re going way back to start off – so imagine everything in black and white. The barter system was the one of the first known forms of trading, pioneered and relied upon by civilizations as far back as 9000 BC. Goods would be exchanged for anything from food and tea leaves to spices, weapons and even human skulls. In every sense, this system is the godfather of money as we know it today.

As you can imagine, lugging around cattle and heavy sacks of grain whenever you wanted something from someone would have been a bit of a drag. Thankfully, it only took a few thousand years for traders to get a better idea – create a small and portable replica which symbolizes the goods which are yet to come.

Around 1200 BC, merchants in China started to use cowrie shells, which were commonly found in the Indian and Pacific Oceans. They were later imitated in bronze and copper. Metal knives were also popular as a substitute for the items due to be delivered – but perhaps unsurprisingly, sharp edges were taken away to swerve any nasty accidents. Often, holes would feature in the middle so they could be linked together – and it’s from here the inspiration for coins was born. Fun fact for a dinner party? Cowrie shells were still commonly used as currency in parts of Africa until the early 1900s. Now that’s stamina.

Creating an asset which represents something else is something that hundreds of utility coins in the crypto world do today. Digital tokens are increasingly being used to represent assets in the physical world – bringing a whole new meaning to ownership.

Fast forward just 700 years (why aren’t all history lessons this fast?) and we finally get to something resembling money – the coins jingling in your pocket. Or not if you’re a diehard crypto nerd, or like the Queen, who doesn’t carry cash.

By the time we arrive at 500 BCE, coins have popped up in Persia, Turkey, Greece and Macedonia – and soon enough, the Roman Empire was getting in on the action. That said, its soldiers appeared to take the revolution with a grain of salt, as many of them appear to have been partly paid in, er, salt. A payment method that’s slow to take off and enjoy mainstream adoption – that rings a bell. 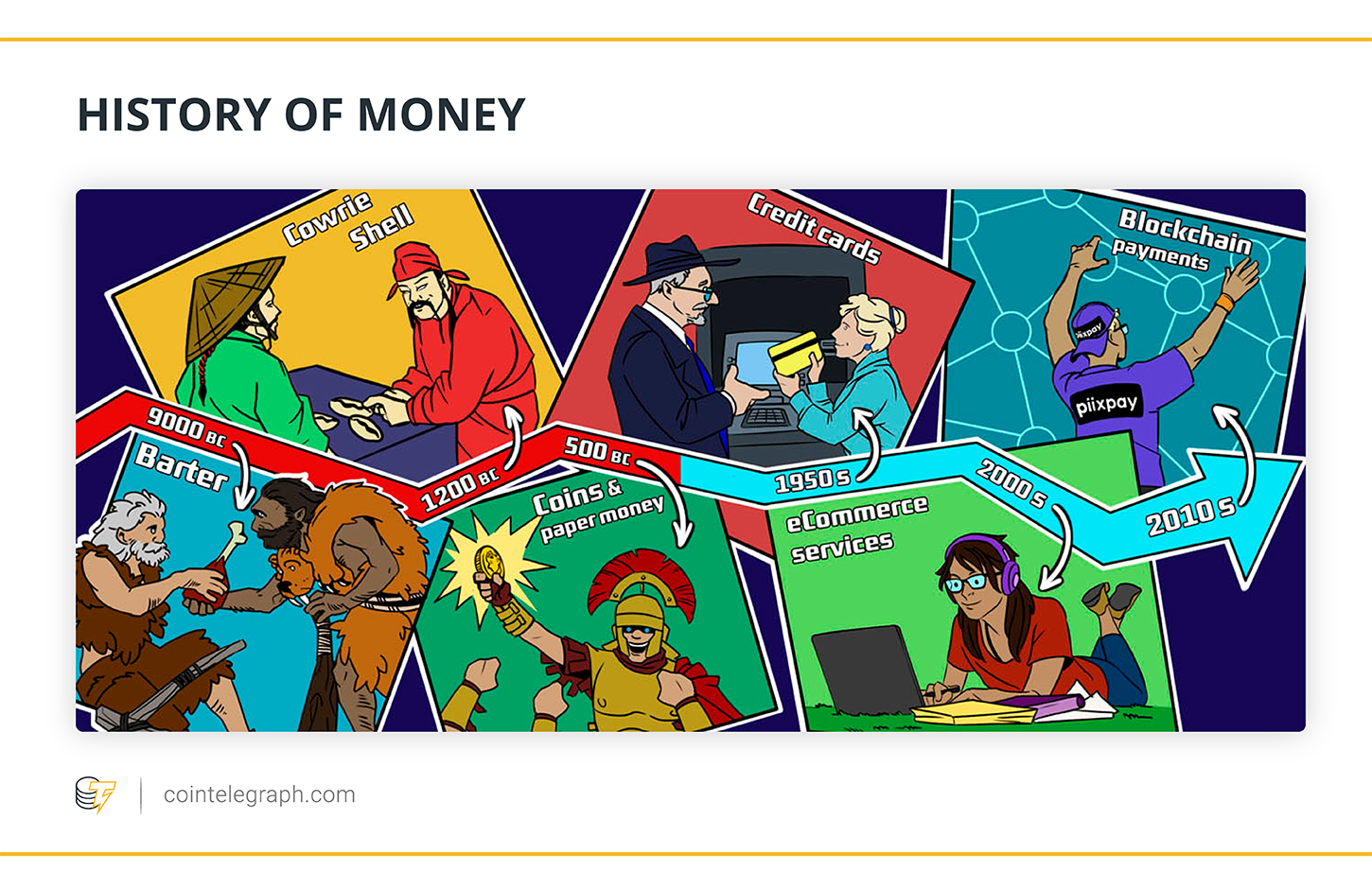 At roughly the same time, paper currency was beginning to come along in leaps and bounds, but they did cause immense amounts of price volatility. In some cases, countries created way too many of these bills – devaluing their currencies and causing rampant price inflation. The story of price volatility sounds familiar, with the price of bitcoin soaring dramatically in 2018 before crashing – sending shock waves through the entire cryptocurrency market and prompting experts to question its suitability for day-to-day use.

Returning to history, banknotes soon emerged which were tied to precious metals like gold and silver – commodities which are still regarded as safe havens today. Further inventions such as checks (16th century) and the telegraph (19th century – yes, still in black and white) helped modernize transactions and speed up transfers. Want another fun fact for that dinner party? The rollout of telegraph systems paved the way for Western Union, which launched in 1851.

With money changing hands in ever larger quantities, it became important for bank notes to be trusted and recognized internationally. This resulted in nations including England and the US moving away from gold as a value standard – and instead, they established centralized institutions like the Bank of England and the Federal Reserve. Many crypto organizations, which do not rely on central banks, are now underwriting their digital currencies with precious metals – and some banks are even making a cautious foray into the world of crypto.

Here’s where we start to leave black and white behind and live in technicolor, with the traditional financial systems we’ve all grown up with. The middle of the 20th century brought about the advent of credit cards, and the late 1960s saw the launch of ATMs. By the 1970s, banks teamed together to launch SWIFT – or to give it its longer, catchier name, the Society for Worldwide Interbank Financial Communication. This allowed financial institutions to talk to one another and facilitate transfers globally – but even today, these can still take a few business days to clear.

Transaction speeds started to rev up as we entered the new millennium thanks to eCommerce platforms such as PayPal, but indeed, these were (and are) still tied to old-fashioned banks. The huge global downturn 10 years ago, which saw several financial institutions collapse, could be regarded as the straw that broke the camel’s back – with high fees, slow speeds, a lack of transparency and the exclusion of hundreds of millions of people without a bank account leading some to realize that a new approach was needed.

Just like cowrie shells had to gain traction all those millennia ago, cryptocurrencies and blockchain are now hoping to deliver a seismic change in money transfers – and economies as we know them. Their immutable records at every stage of a transaction helps prevent fraud and money laundering – speeding up transfers while driving down costs for consumers. Sure, there are hurdles to overcome, but as we’ve seen, practically every development in the history of money has had endured struggles at one point or another.

Several platforms are working to make cryptocurrencies practical – and minimize currency losses. For example, Piixpay enables users to settle bills and transfer money to friends and family using Bitcoin, Bitcoin Cash, Litecoin, or Dash – with these payments arriving to recipients in the form of euros.

Slow adoption, price volatility, underwriting currencies with gold and banks slow to embrace new technology. To understand cryptocurrency’s challenges today, it really pays to look at the problems of yesterday (and yestercentury.)