Major cryptocurrencies have begun to display gains on a weekly basis, confirming that the recovery is picking up steam.

Major cryptos have begun to display gains on a weekly basis, confirming that the recovery is picking up steam. Let’s see which are the top five coins leading the charge 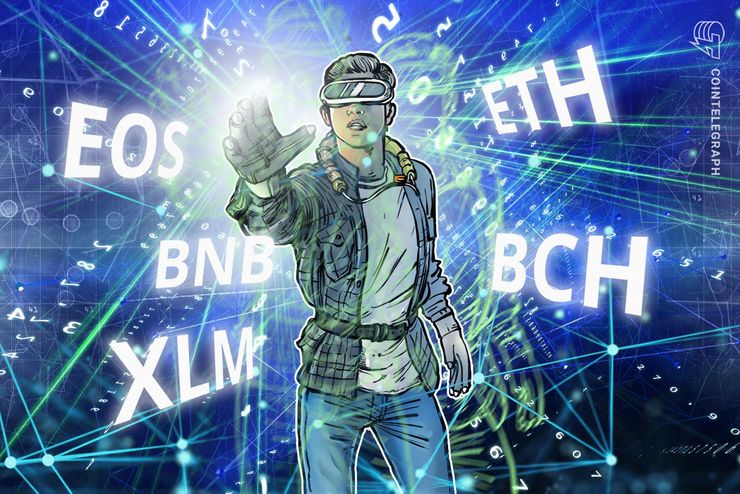 After a prolonged downward trend, most of the major cryptocurrencies are showing gains on a weekly basis. This shows that the recovery is picking up steam.

However, even after the recent rise, most tokens are still way below their lifetime highs. Cryptocurrencies will have to spend a long time forming large bases, upon which the next bull phase will be built. It is too early to call a bottom.

A bear market is a great time for the investors to pick up the best coins at a bargain. Alexis Ohanian, the co-founder of Reddit, has said that the current bear market has driven away all the speculators, leaving behind only the true crypto believers.

That is a bullish sign because the die-hard crypto enthusiasts buy for the long term and will not panic sell on the next 30 percent fall.

After a new uptrend begins, new traders will start jumping in. The entry of institutional investors and the approval of a crypto exchange-traded fund (ETF) can provide a big boost to the crypto prices. Once an ETF is approved in the United States, other nations might follow suit.

EOS has been on a roll and has emerged as the best performer among the major cryptocurrencies, rising by about 35 percent in the past seven days. The EOS community seems to have been satisfied with the assurance of block.one CEO Brendan Blumer, who has posted in the cryptocurrency’s official Telegram channel that “great things take time.”

In his message, Blumer also said that he does not want to take what he called the short-sighted approach and push half-finished products out. Is this attitude good enough to carry the cryptocurrency higher, or is the rally about to hit a roadblock? Let’s find out.

The EOS/USD pair is attempting to rise above the overhead resistance of $3.8723. If successful, it will indicate that the markets have rejected the lower levels. Therefore, the medium-term investors can buy on a weekly close (UTC time frame) above $3.8723, and keep a stop loss below the strong support of $2.1733.

Both of the moving averages are flat, and the RSI has moved up towards the midpoint. This shows that bottom formation is in progress.

Our bullish view will be invalidated if the price turns down from the current levels, or from $4.4930, and breaks below $1.55.

The United States Commodity Futures Trading Commission (CFTC) has largely received positive comments regarding the Ethereum mechanism. Will this open the door to a regulated futures contract on Ethereum? Let’s keep our fingers crossed.

The ETH/USD pair has been moving up for the past two weeks. It has risen from $103.2 to the current levels during this period. The 20-week EMA is flattening out, and the RSI is gradually climbing towards the midpoint. This shows that the bears are losing their grip.

A breakout above $167.32 will indicate strength and confirm a bottom at $83. Therefore, traders can buy on a weekly close (UTC time frame) above $167.32 and keep a stop loss of $100. If the price fails to sustain the higher levels after the breakout and dips below the breakout level again, it will denote weakness and the positions can be closed.

If the cryptocurrency sustains above $167.32, it can move up to $225, and above it to $255. Traders can trail the stop loss higher as the price moves northwards.

Coinbase will release a new wallet update over the next few weeks that will support Bitcoin Cash (BCH). Major Malta-based cryptocurrency exchange OKEx has added Bitcoin Cash support to its customer-to-customer (C2C) trading platform. Traders can now buy Bitcoin Cash with one of the five fiat currencies supported by the platform.

What do the charts forecast for the next few weeks?

In the medium term, we don’t see any major bullish signals yet. Although the bulls are attempting to form a higher low at $105, it will take some time before we can confirm the start of a new uptrend.

A breakout above $239 will be the first step that will confirm that the bottom has been formed at $73.5. The 20-week EMA is also located just above $239. Hence, this is likely to act as a major hurdle. Once crossed, the BCH/USD pair will pick up momentum. The next overhead resistance is way higher, closer to $600.

Although short-term traders can try to stay on the long side for some quick profits, the medium-term traders should wait for a confirmation of a bottom before buying.

Binance launched the testnet of its new decentralized exchange, Binance DEX, on Feb. 20. With this, the company aims to offer its customers the best features of the Binance exchange in a decentralized setting.

Binance academy has risen to the third spot on the exposure platform Product Hunt. Binance Charity Foundation (BCF) has launched a lunch-based program in Uganda, where about 200 students and school staff will be given two meals in 2019.

Binance Coin (BNB) has regularly been featured on our list of top crypto performers. Can this continue?

The BNB/USD pair is showing strength. It easily broke above the resistance at $10 and is currently facing resistance at $12. This zone had proven to be a major hurdle previously, so we anticipate a minor dip or a consolidation in the next few days.

Both of the moving averages are flat, and the RSI has risen into the positive territory, which shows that the bulls are back in the game.

Although we have been bullish on the pair for the past few weeks, we were unable to spot a reliable pattern or a good stop loss point. Because of that, we are not suggesting a trade in the coin.

Head of Blockchain Development & Digital Currencies at IBM, Jesse Lund, has hinted at a new partnership with Stellar (XLM), which has boosted the cryptocurrency’s prices.

Can this news change the fortunes of the coin? Let’s find out.

While most other cryptocurrencies are well above their recent lows, the XLM/USD pair continues to languish near its own. If the bulls push the price above $0.09285498, the recovery could extend to $0.13427050. The 20-week EMA is also located just above this level, so it might act as a major roadblock.

Both of the moving averages are sloping down, and the RSI is still in the negative zone. Also, the cryptocurrency has been a major underperformer in the current pullback. If the bulls fail to break out of $0.09285498, the bears will again attempt to resume the downtrend by breaking down to a new yearly low. Hence, we are not suggesting a trade in the pair.

Market data is provided by the HitBTC exchange. Charts for analysis are provided by TradingView.