What Powers China’s Crypto Mining Industry, and Is It Sustainable?

As the crypto mining industry continues to grow, is China able to sustain its mining boom as the industry leader?

4252 Total views
113 Total shares
Listen to article
0:00
Analysis
Own this piece of history

The cryptocurrency mining industry continues to grow daily, supported by a continuous stream of new and more efficient hardware. China is at the forefront of the industry, but as environmental concerns loom, the sustainability of their success is coming into question.

Mining chip manufacturers, the most prolific of which are based in China, work tirelessly to develop ever-more-powerful processors. With each new iteration, these high-capacity chips require more and more energy to operate. Newer mining machines render old ones obsolete, resulting in an increasing flow of electrical waste, the majority of which goes unrecycled.

Little doubt remains that proof-of-work blockchain networks, like Bitcoin, are environmentally unsustainable in their current state. Computer scientist Hal Finney — believed to be one of Bitcoin’s original developers — noted the potential problem of CO2 emissions resulting from widespread Bitcoin implementation back in 2009, but was unable to offer a solution before his death in 2014.

Nowadays, the Bitcoin network has an estimated annual electricity consumption of 73.12 TWh, equivalent to that of Austria or the amount of electricity required to power 6.7 million households in the United States. The annual carbon footprint this creates is almost 35,000 kilotonnes of CO2 — or 308 kilograms for each individual transaction.

As an illustration, 1 kg of uncompressed CO2 fills approximately two standard bathtubs, and Bitcoin completes 7 transactions per second on average — that’s over 4000 bathtubs worth of CO2 created every second by the Bitcoin network.

The 2nd Annual Cryptoasset Benchmarking Study released by Cambridge University estimates that only 28% of crypto mining energy comes from renewable sources (as of December 2018).

Since Chinese mining farms contribute to approximately 60 to 70% of this energy consumption (and resultant pollution), the country is a key talking point in any discussion regarding the sustainability of cryptocurrency mining.

What makes China so attractive for crypto mining?

Bitmain and Canaan Creative are the main mining chip manufacturers in China, with Bitmain producing 75% of all cryptocurrency mining hardware. As mining has become more expensive over time, Bitmain has launched the World Digital Mining Map to help mining firms around the world find the most affordable areas to operate. Canaan Creative recently filed for an IPO that will go ahead this month, aiming to get the company listed on Nasdaq under the ticker CAN. Similarly, Bitmain is also planning an IPO.

China’s affordable energy is the main reason the country has become a go-to destination for industrial-scale cryptocurrency mining facilities. Unfortunately, as the Cambridge report outlines, much of the country’s low-cost and affordable electricity still comes from coal power, making it one of the more environmentally unfriendly places to mine.

Improvements are being made, however, with the Chinese province of Sichuan being promoted for its cheap, environmentally friendly hydroelectric power. The heavy rainfall that the province usually receives helped it to produce 78.2 gigawatts of power last year — enough to power almost 65 million Chinese households. The excess power means Sichuan province can sell electricity for five times less than what major cities like Guangzhou and Beijing charge.

Is crypto mining in China sustainable?

In April this year, the National Development and Reform Commission of China released a draft paper listing cryptocurrency mining as one of several potential activities to phase out due to a lack of regulation and environmental concerns.

However, last week, the NDRC decided to remove crypto mining from the potential ban list following a call by Chinese President Xi Jinping for the country to embrace blockchain technology. The government made it clear that this does not indicate support for Bitcoin or other cryptocurrencies and trading in the country remains illegal.

While the news is undoubtedly a positive boost for the crypto mining industry, it alone does not promise a bright future. In order for miners to remain incentivized to keep mining, they don’t just need permission — they need profit. As the global climate crisis becomes an increasingly hot topic, pressure is being placed on China to reduce its carbon emissions and develop greener energy — energy which is often less affordable.

Professor Klaus Hubacek, of the University of Maryland’s Geographical Sciences department, told Cointelegraph that profitability and environmentally sustainable energy use are mutually exclusive:

“No, it’s nowhere near sustainable. The energy mix is highly coal-dependent although that has improved somewhat over the last couple of years and is predicted to further decline from its peak in 2007 (80% of electricity was from coal) to currently about 2/3 being coal to predicted 40% in 2040 (which is still pretty high — e.g. comparable to the energy mix of Germany today; which is also pretty bad as some countries are entirely or close to renewable electricity.)”

The cost of mining Bitcoin

In Adam Hayes’ 2015 paper, “A Cost of Production Model for Bitcoin,” the author equates Bitcoin production to a competitive market, noting that miners will (in theory) “produce until their marginal costs equal their marginal product.” Electricity costs make up almost all of these marginal costs once the initial infrastructure and equipment have been paid off. Any change to the cost of electricity necessitates a reassessment of profitability.

Considering that Bitcoin’s hash rate has increased almost every year since its creation and electricity costs have remained largely unchanged, one can surmise that mining equipment is becoming increasingly more powerful and efficient.

However, this growth correlates with a stable cost of energy, and there is little evidence to suggest it can maintain profitability if energy costs increase significantly. In the event that energy becomes unavoidably more expensive, several factors can be changed to improve profitability.

Various ways to improve efficiency by changing the core Bitcoin algorithm have been suggested in different forms over the years. If the number of transactions per second could be increased to a level closer to that of the Visa network’s 1700 TPS, then the required energy would drop considerably. On paper, if the time taken to generate a block can be reduced or the block size can be increased, then the network becomes more energy efficient.

However, despite much discussion regarding these changes and several attempts to implement an altered version of Bitcoin, nobody has managed to find an effective solution. This is mostly due to the nature of a decentralized peer-to-peer network, which takes a long time to relay new information to Bitcoin’s 10,000+ nodes around the world.

Improvements in solar and wind power

The costs associated with using renewable energy like solar and wind power have been decreasing steadily over the past decade. In early November this year, the Financial Times reported that these forms of renewable energy had “reached parity with average wholesale prices in California, China, and parts of Europe.” Furthermore, by the end of next year, renewable energy costs across most of western Europe are expected to fall below wholesale market prices. 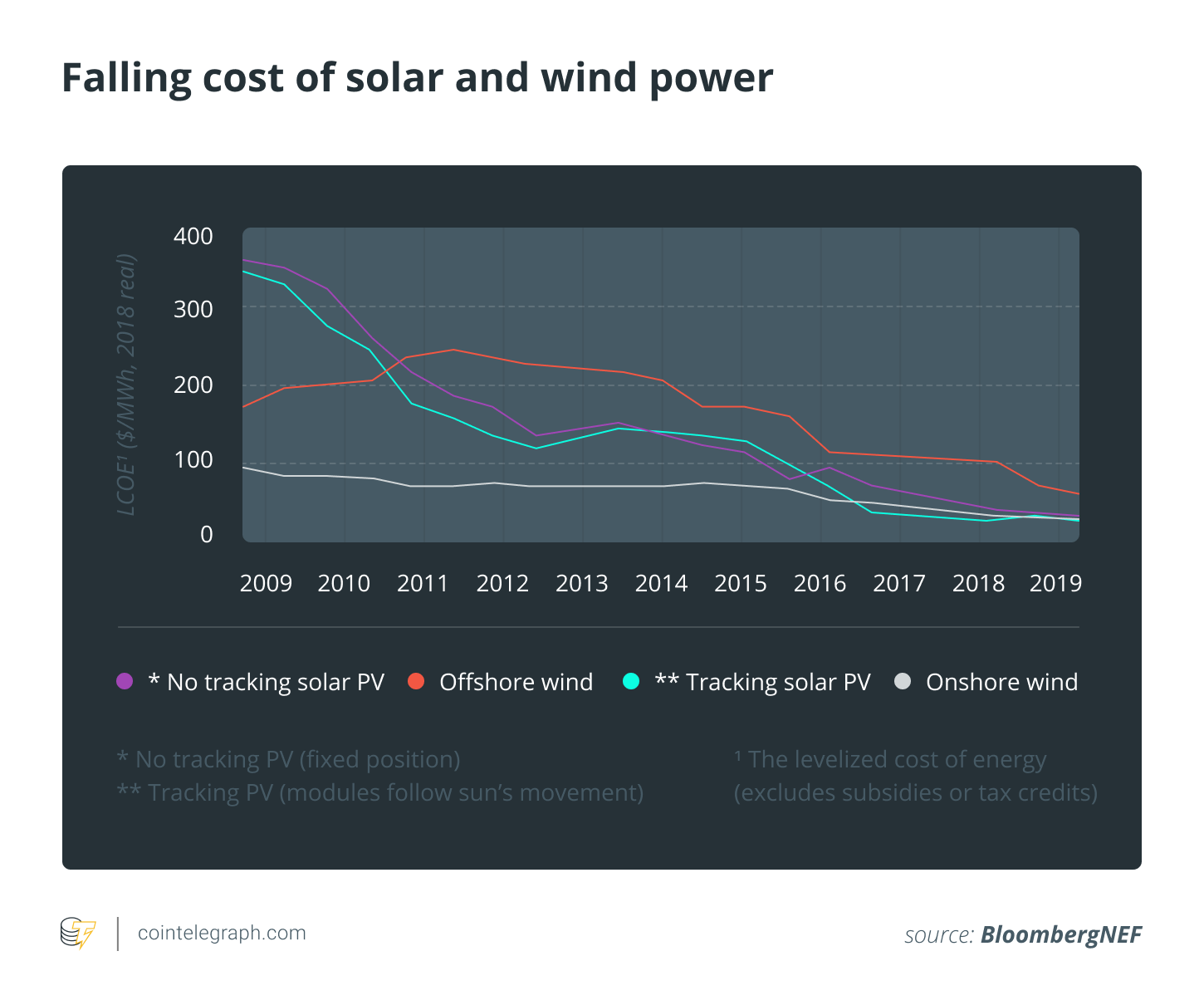 China is the world’s largest market for solar farms, known as photovoltaic (PV) power plants, but experienced an 11% reduction in capital expenditure over the past six months due to last year’s cutback on public solar subsidies.

At the beginning of 2019, in a bid to improve its solar energy parity, the NDRC, in collaboration with the National Energy Agency, unveiled plans to drive investment into subsidy-free PV projects. In many cases, land use fees have been waived to incentivize development and grid operators have been ordered to prioritize dispatch for PV projects.

Despite its efforts, China still remains the world’s largest coal user and its imports increased by almost 10% this year, partially prompted by the ongoing China–U.S. trade war, which has forced China to investigate cheaper fuel prices abroad.

However, a report from the International Energy Agency predicts that solar and wind will be almost entirely responsible for a 50% increase in global renewable energy capacity by 2024. Dr. Fatih Birol, Executive Director at the IEA, said:

“Renewables are already the world's second-largest source of electricity, but their deployment still needs to accelerate if we are to achieve long-term climate, air quality, and energy access goals.”

While significant steps are being made to reduce costs associated with solar and wind power, these cost reductions are slowing down while the cost of mining Bitcoin continues to increase. Professor Hubacek believes that, “further investment and policy support for decarbonization of the electricity sector and the overall economy” is required, including “an increase in energy efficiency and reduction of consumption (e.g. lifestyle changes).”

Mining Bitcoin could become less profitable after next year’s “halvening,” a predetermined event that occurs roughly every four years in order to manage inflation. Sometime around mid-May 2020, the block reward for mining Bitcoin will be automatically reduced from 12.5 BTC to 6.25 BTC, decreasing the profits associated with mining.

Historically, these events have resulted in a drop in hashrate as small-scale miners shut down unprofitable operations, which, in turn, results in a reduction in mining difficulty that eventually draws back old and new miners alike. The system is specifically designed to financially self-regulate in this manner, but unfortunately, was never designed to self-regulate for energy efficiency.

Is there a future for the industry?

Sustainable or not, cryptocurrency is not going anywhere — whether governments like it or not. The Bitcoin network in particular presents a problem, because not only is it unsustainable, but it is now so big that it has become difficult to control or replace. However, so long as affordable electricity is available, mining of Bitcoin will continue unabated — whether in China or elsewhere.

Over the next few years, further pressure will be placed on governments and corporations to adhere to stricter environmental regulations, which will stretch their budgets to the limit. For Bitcoin to emerge unscathed, both mining equipment and energy sources in China will need to become greener and more efficient. Fortunately, these areas are beginning to show promise.