The SEC has rejected an ETF with only a 25% BTC component before, but how about just 5%? WisdomTree may be testing the agency’s limits.

Many investment firms have launched crypto exchange-traded funds, but so far, none has found favor with the United States Securities and Exchange Commission. Firms keep trying, though, and this past week, two more tendered applications for crypto ETF-like products — if not pure-play Bitcoin ETFs have emerged.

WisdomTree, an asset manager and ETF specialist, filed an N-1A form registration statement on June 16 with the agency for an ETF that would invest up to 5% of its portfolio in cash-settled Bitcoin (BTC) futures contracts offered by Chicago Mercantile Exchange.

WisdomTree was close to applying to the SEC in January for a regulated stablecoin — something seen at the time as a possible stalking horse for a crypto ETF bid. Now it has actually gone that route, but with a BTC component so small the SEC may scarcely notice — or care. Derek Acree, a co-founder and legal counsel at DeFi Money Market — a decentralized financial ecosystem — told Cointelegraph: “This is not a new tactic but, instead, a calculated plan to explore exactly what the regulators’ thresholds are.”

“I wasn’t surprised about the WisdomTree filing yesterday,” Eric Ervin, the president and CEO of Blockforce Capital, told Cointelegraph. “We filed for a similar concept last year.” That application was for Reality Shares ETF Trust, an exchange-traded fund proposing to invest in a portfolio including both sovereign debt instruments and Bitcoin futures (up to 25% of total assets). Reality Shares subsequently pulled its application on SEC advice. Ervin told Cointelegraph:

“Bitcoin deserves a place in a diversified portfolio, and if the SEC continues to block this, they are essentially encouraging investors to seek that exposure through other, potentially less-regulated means.”

Meanwhile, on June 12, investment firm Wilshire Phoenix applied to the SEC for — not an ETF — a grantor trust, which has a different application process. However, like a crypto ETF, it allows for a publicly traded Bitcoin fund covered by the Securities Act of 1933 and the Securities Exchange Act of 1934. The SEC has already approved such a trust for Grayscale Investments.

James Angel, a professor at Georgetown University’s McDonough School of Business, told Cointelegraph that getting a trust approved by the SEC is easier than getting an ETF approval “as long as you’re disclosing everything, all the risk factors.” Wilshire Phoenix’s SEC S-1 form filing has “a totally different set of approvals” with a different set of bureaucrats casting judgment. He added: “I don’t see that the SEC has legitimate means to turn it down.”

Wilshire Phoenix, too, had earlier applied for an ETF — again, a mix of Bitcoin and short-term treasuries that used the bills to cushion against crypto volatility. Its application was officially rejected by the SEC because the Bitcoin market, in the agency’s view, was still too heavily manipulated back in February 2020.

Trading over the counter

This alternate trust route has some disadvantages. The Grayscale Bitcoin Trust — and Wilshire Phoenix’s trust, if approved — trade over the counter, not on major exchanges like the New York Stock Exchange, “meaning that it is inaccessible to retail investors as most retail investors don’t have access to OTC markets,” Lee Reiners, a lecturing fellow and the executive director of the Global Financial Markets Center at Duke Law School, told Cointelegraph, adding: “GBTC trades at a fairly significant premium to Bitcoin, which would likely not be the case with an ETF.”

Wilshire Phoenix’s product would have a premium of about 0.90% (i.e., 90 basis points) according to its filing, whereas Grayscale has a 2.00% (200 basis points) management fee.

In addition, an ETF appeals to a wider range of investors — retail and institutional — and would be more liquid than a grantor trust like Grayscale’s or Wilshire’s, according to Reiners, who further added: “Plus, investors are just more familiar and comfortable with the ETF structure.”

“Some investors still won’t touch anything on the OTC — though trading on the OTC isn’t as burdensome as it used to be,” Angel told Cointelegraph, noting that those individuals will likely wait for exchange-traded products to emerge.

Lennard Neo, the head of research at Stack Funds, told Cointelegraph that there are distinct differences between Grayscale’s and Wilshire’s trusts, including the target market — “accredited” for Grayscale, retail for Wilshire, and also the higher premium on Grayscale share price versus the underlying, adding:

Neo continued, saying that the “demand is definitely there and has been for the past two years,” which is evident from the influx of investors buying crypto on zero-fee trading apps such as Robinhood, as well as on major exchanges. He opined: “A publicly traded crypto fund would further open the flood gates towards slightly more traditional retail investors who already have brokerage accounts with existing firms that do not deal with cryptocurrency.”

Elsewhere, a recent Bitwise Asset Management survey of financial advisor attitudes toward crypto assets found that advisors “overwhelmingly [65%] would prefer to buy crypto in an ETF package compared with all other options,” as seen in the table below. 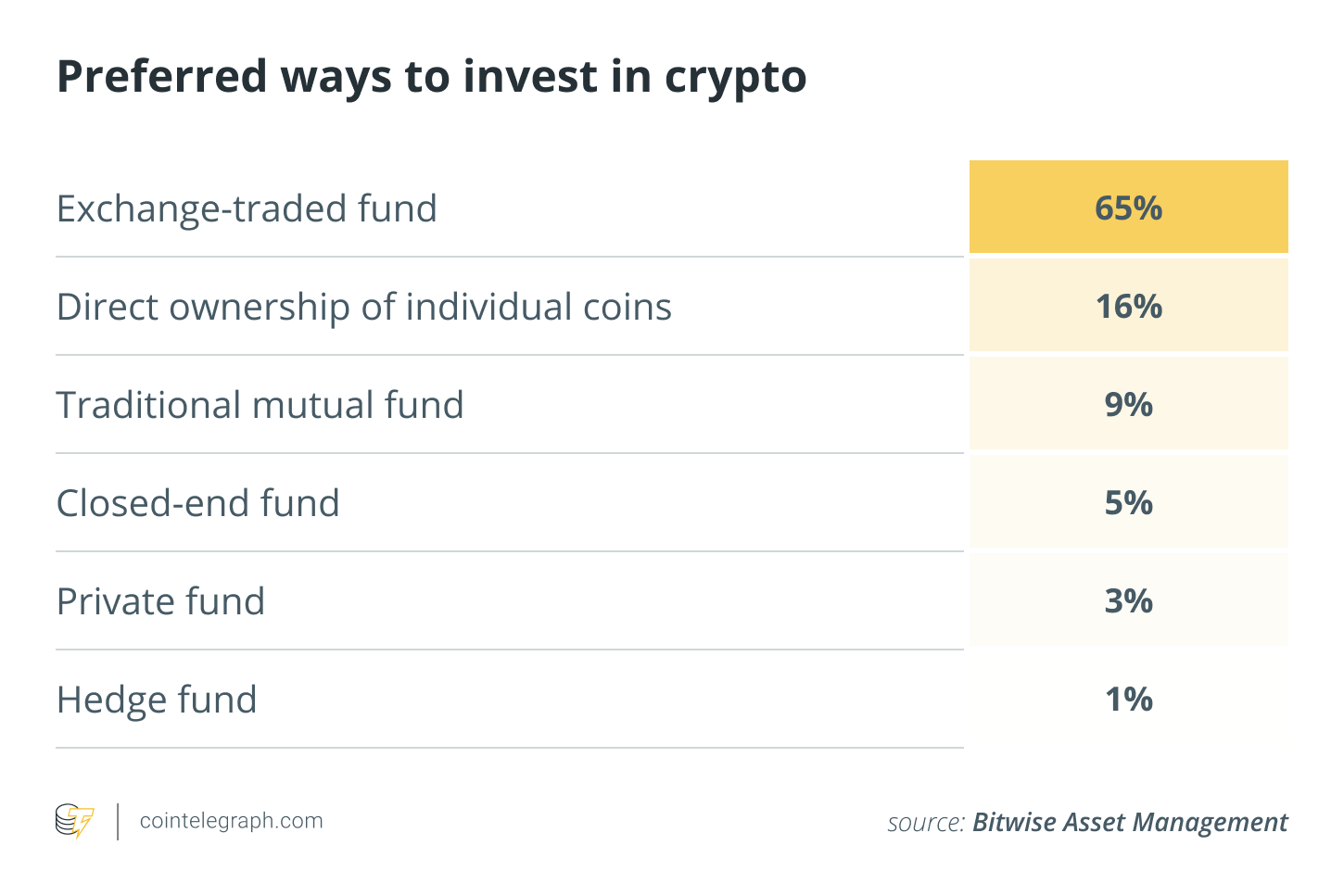 “No reason for the SEC to turn this down”

What are Wilshire’s chances of getting SEC’s approval for its trust? “I am guardedly optimistic,” said Angel, adding: “I see no reason for the SEC to turn this down,” though he wouldn’t be surprised if the agency were to sit on it for a while. “Don’t hold your breath waiting for the SEC to act” is a useful maxim. SEC staffers will be very careful reviewing such an application, probably running it past the agency’s commissioners — which is not always the norm. There could be several amended filings before a decision is reached.

Will other ETF rejectees now go the trust route as well? Most will probably wait to see what happens with Wilshire’s application, according to Angel, but if it is approved, others may try. However, the first-ever crypto ETF approval from the SEC may not be on the cards any time soon. “We won’t see it on Jay Clayton’s watch,” said Angel. Bitcoin still has a somewhat dodgy reputation among regulators, including the SEC’s chairman whose term ends in 2021. Acree agreed that some regulators just don’t like crypto:

“There is a continued grassroots trend to separate the infrastructure of power from money and this movement poses a risk to regulators who view the non-governmental controlled asset classes as becoming more mainstream.”

Once Clayton leaves the SEC, one can expect to see a crypto ETF, said Reiners. “And when it happens, it will be a BIG deal,” he added, further sharing with Cointelegraph: “Anyone with an ETrade or Robinhood account could gain exposure to Bitcoin without having to ever touch Bitcoin. It would announce that crypto has gone mainstream in a way no other product could.” However, Neo doesn’t believe that the “ETF is the end game here,” as he went on to clarify:

“An ETF will be a major on-ramp for investors getting into the digital asset space. Traditional markets alike, as investors enter the market, they become educated, aware and eventually more sophisticated, resulting in the demand for more complex structure products as they seek higher returns and opportunities.”

Overall, investment firms appear to have decided that a full-scale frontal crypto ETF assault on the SEC isn’t viable — not now, anyway — so they are looking for scaled down alternatives. One is to reduce the ETF’s Bitcoin component so much that the agency no longer views it as being risky.

Another is to form a grantor trust that allows public trading of BTC, but only over the counter, which limits exposure. Generally, the strategy for dealing with the regulatory agency seems to be to get a foot in the door and wait for better times to come.