Health care, identity management and renewable energy are some of the non-financial blockchain use-cases gaining popularity in Africa.

3277 Total views
155 Total shares
Listen to article
0:00
Analysis
Own this piece of crypto history
Collect this article as NFT

With pundits like Twitter CEO Jack Dorsey predicting that Africa “will define” the future of Bitcoin (BTC), cryptocurrency and blockchain technology continue to attract interest from both public and private establishments across the continent. Many of these adoption cases have been moving beyond finance, developing solutions targeted at issues like unemployment, identity management, health care and supply chain, among others.

Amid the growing enthusiasm for crypto and blockchain technology in Africa, industry stakeholders interviewed by Cointelegraph identify a lack of education as one of the major hurdles standing in the way of more broad-based utilization of the technology. The absence of clear-cut regulations and minimal support from various governments have also had a negative impact on the rollout of pilot projects that could provide solutions to some of the problems plaguing the continent.

According to data from the World Economic Forum, Africa has the world’s youngest population. Of the top 20 nations with the lowest median age, the only non-African nation is Afghanistan, with Niger having a median age of a little above 15 years — about half of the global average.

Such a high concentration of a young demographic presents opportunities for an increase in the adoption of emerging technologies as seen in the mobile market boom across the continent. Indeed, Africa is reportedly the fastest-growing mobile market in the world. 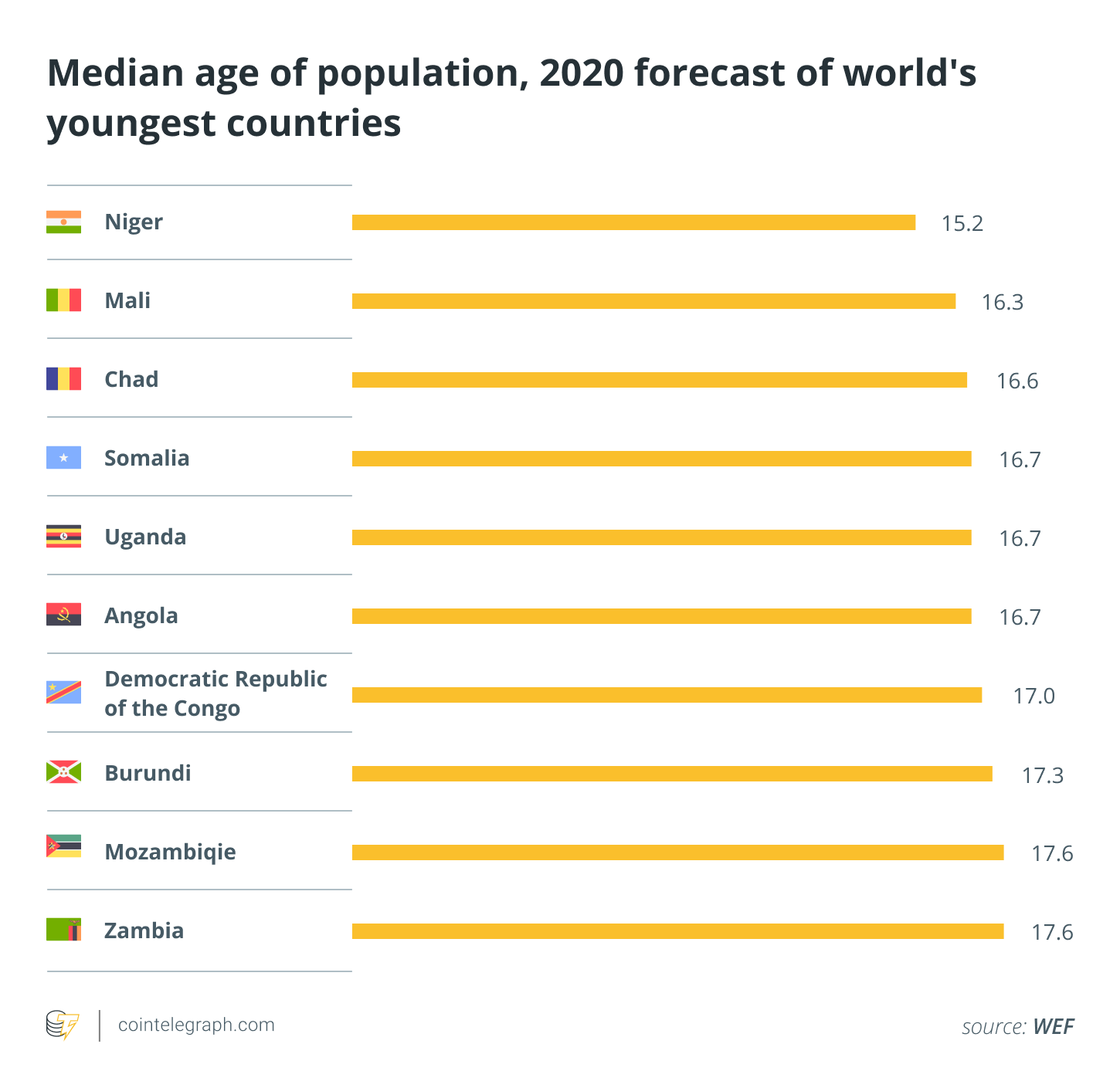 Blockchain technology has the potential to follow the trajectory already set by mobile telephones in Africa. Apart from digital currency systems being used for cross-border remittance, several projects in Africa have been exploring blockchain-based solutions to problems that have eluded solutions for decades.

All of the industry stakeholders interviewed in this article by Cointelegraph about the state of blockchain utilization in Southern Africa agree that there is an ongoing narrative shift. While the initial focus of many projects was on payments and crypto trading, several startups have started examining non-financial use cases for decentralized ledger technology-based systems.

Commenting on the pivot toward other DLT use cases, Chris Cleverly, the CEO of Kamari, a blockchain payment and gaming platform, revealed that it was a new development that only began taking shape in the last 12 months. In an email to Cointelegraph, Cleverly remarked:

“In South Africa, the majority of blockchain growth until a year ago was all focused on trading and banking and generally the financial side of the sector. Lately though, there have been a wide variety of use cases emerging that are focused on media technology.”

Cleverly also revealed that blockchain technology is being applied in the development of Africa’s renewable energy ecosystem, adding: “The Sun Exchange is another fascinating nontraditional financial use case for renewable energy.” According to Cleverly, “They created the world’s first peer-to-peer leasing platform that enabled anyone in the world to invest anywhere to create solar energy arrays, all maintained and enabled by blockchain technology.”

Launched in 2015 in South Africa, The Sun Exchange enables the monetization of sunshine — one of the continent’s most abundant resources — with an estimated 2,000 kilowatt-hour per square meter reaching the surface on an annual basis. Via DLT, The Sun Exchange is able to create a platform for P2P solar cell micro-leasing for schools and businesses in Africa.

At the intersection of blockchain technology and renewable solar energy, several startups have identified a viable channel to light up Africa, with a special focus on rural areas historically poorly served by their respective national grids. Data from the U.N. shows Africa’s electricity generation is the lowest in the world for a population of over 1.3 billion people. 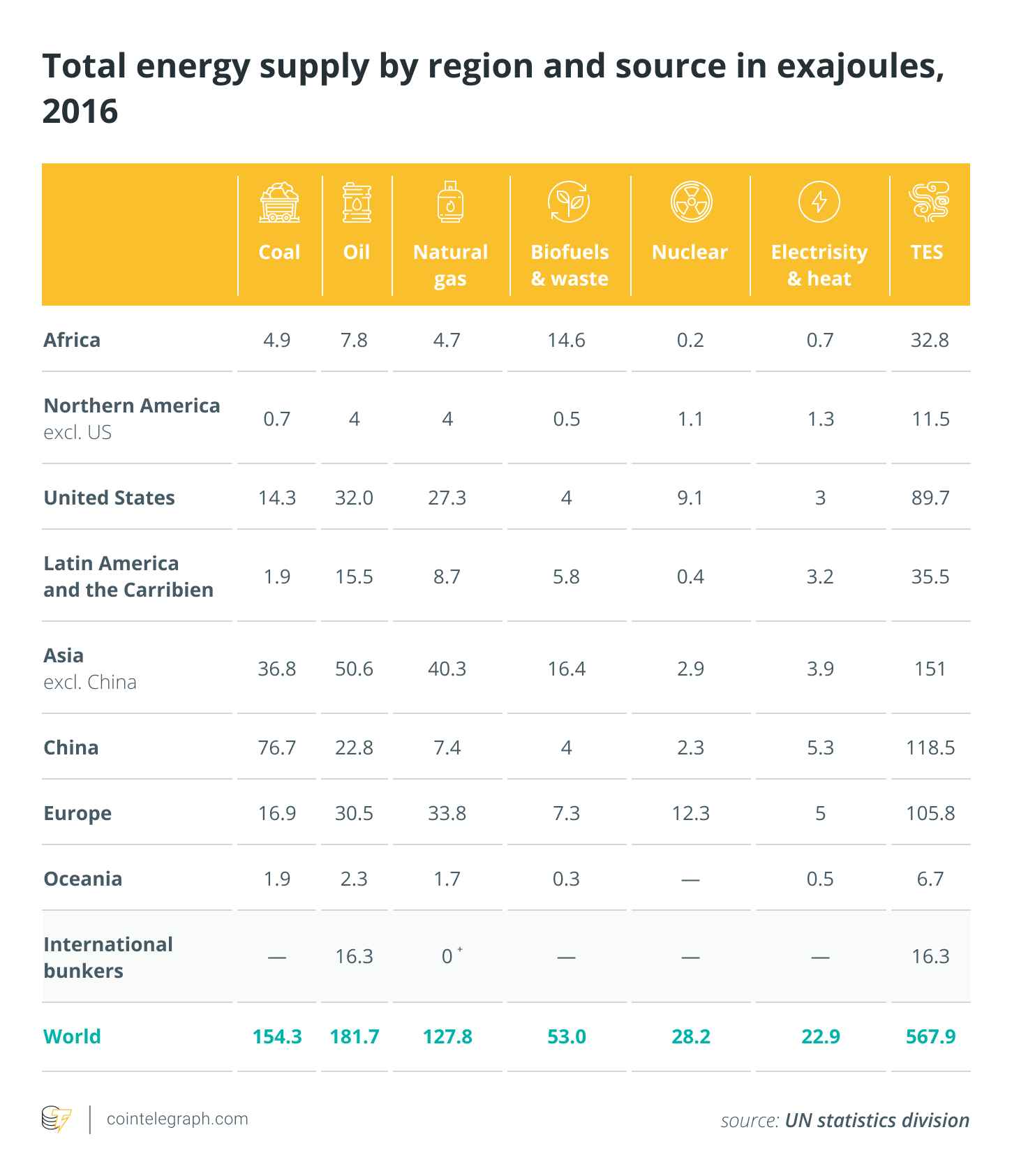 Many of these projects use similar business models that allow customers with solar panels to sell excess energy to residents. Projects like OneWattSolar even utilize tokenized assets to make payments, thus bringing digital currency adoption even closer to the masses.

The consumer-driven energy sector is taking off not only in Southern Africa but across the rest of sub-Saharan Africa with the aim of addressing the needs of approximately 58% of the population — which has little or no access to electricity. Amid the blockchain-based solar power revolution in Africa comes the potential for a significant transition toward cleaner energy sources, especially at a time when environmental scientists have been clamoring for a reduction in fossil-fuel dependence.

Part of this expanding utilization of blockchain technology appears to be coming from an improved perception of the technology by governments and private establishments in Africa. Grey Jabesi, the director of business development at the United Africa Blockchain Association, a Pan-African blockchain organization told Cointelegraph:

“Leaders and decision-makers from both government and private institutions used to negatively associate blockchain with cryptocurrency, which made them hesitant to explore the technology or work with blockchain startups. This decelerated the adoption of the technology but now, most of them have realized the potential of blockchain and are exploring ways to implement it into their business if necessary. Blockchain startups are also starting to get institutional recognition and funding.”

According to Jabesi, blockchain adoption in identity management is one of the leading real-world use cases for the technology in Southern Africa. Figures from the World Bank show that more than 1 billion people across the world do not have any official identification.

This identity management crisis is one of the reasons why a significant percentage of the global population remains unbanked. However, problems with robust identity systems are not restricted to Africa alone: case in point, the “Windrush scandal” of 2018 in the United Kingdom.

Figures from both the World Bank and UNICEF put birth registration — the most fundamental form of official national identity — in Africa at 50%. According to UNICEF, the situation is particularly worse in Eastern and Southern Africa where the birth registration of children under five years of age has dropped to 40%.

In a conversation with Cointelegraph, Nini Moru, the executive coordinator at the Africa Blockchain University of Southern Africa, revealed that startups are already leveraging DLT solutions to improve identity management in the region:

“FlexFinTx is working on self-sovereign identities for Africans who don’t have forms of identification and thus are restricted from accessing services such as health care, insurance and banking. It’s using Algorand’s blockchain to make sure that the identities are tamper-proof and self-sovereign.”

Back in February 2020, FlexFinTx became the first African company to join the Decentralized Identity Foundation — a coalition of establishments looking to leverage DLT for Self Sovereign Identity. The company has partnered with tech giants like IBM and Microsoft in the deployment of its FlexID through WhatsApp, a system that is already helping Zimbabweans get easier access to banking and health care services.

Speaking at the Blockchain Africa conference earlier this year, Victor Mapunga, the CEO and co-founder of FlexFinTx, highlighted the need for novel identity management systems not to neglect the protection for sensitive user data. During his address at the conference, Mapunga revealed that FlexID users have total control over how their information is shared.

Blockchain adoption has also been growing in the continent’s health sector. A combination of factors such as lack of political will, corruption, poor allocation of resources and maintenance culture, as well as an insufficient number of medical professionals has seen health care remain a challenge for the vast majority of people living in Africa.

While the problems are well-known, creating lasting solutions has remained unattainable for several stakeholders looking to improve the situation. However, via blockchain technology, health care companies in Africa have been working toward providing aid to those hardest hit by years of government neglect. Commenting on some of the significant blockchain-based advances in African health care service delivery, Cleverly remarked that his company seeks to develop a digital medical data marketplace, adding:

“Kamari has also been involved in programs to promote and encourage HIV testing across Africa through crypto incentives. The real promise here is through community engagement through blockchain tech.”

With lower HIV, malaria and fewer respiratory tract infections, like tuberculosis, among the leading causes of death in Africa, some companies have been leveraging blockchain technology to decentralize the flow of information and care for the continent’s most vulnerable demographic. Platforms like KinectHub have created a tokenized ecosystem to reward participants working to improve the continent’s health care sector. These projects also create electronic health records that accurately capture the medical histories of patients — a privilege hitherto only available to wealthy Africans. Blockchain technology provides a robust security infrastructure that ensures sensitive data won’t be compromised.

Access to potentially life-saving medication is also another significant health care challenge in Africa. According to the U.N., people in Africa mostly consume imported drugs, with only 2% of the supply produced on the continent. This statistic becomes even more alarming when considered against the backdrop of India and China — places with similar population densities, only importing 5% and 20% of consumed drugs, respectively.

Exacerbating this already difficult situation is the proliferation of counterfeit medicines. According to a study by the London School of Hygiene and Tropical Medicine, up to 158,000 malaria deaths per year in Africa are caused by fake anti-malaria medication. With blockchain technology showing some promise in the area of traceability, projects have been applying the technology directly in the African pharma supply chain. As previously reported by Cointelegraph, Uganda’s government partnered with blockchain pharmaceutical startup MediConnect back in July 2019 to trace fake drugs in the country.

While these projects have tackled various problems, there appears to be a shifting tide in the approach to solving the developmental issues plaguing the continent. With Africans leading the charge, the solutions created by these startups have a much higher probability of being tailored to specific African peculiarities. Cleverly touched on this subject, using developments in the supply chain arena as an example:

“Another fascinating blockchain company is fuzoDNA, a blockchain platform for supply chain management. The potential commercial and psychological value for Africa to upgrade its supply chain management from its current colonial-era system is hard to understate. Transforming this sector for Africans/by Africans would transform Africa and place it at the center of its own economy.”

As previously reported by Cointelegraph, one of the key takeaways from the 2020 edition of the Blockchain Africa conference was the importance of education as an important adoption driver for the technology on the content. Commenting on the major issues for more broad-based DLT adoption in Africa, Moru remarked:

Apart from these problems, African blockchain developers also navigate challenges like scalability and limited interoperability with legacy systems. Industry stakeholders will be hoping that these issues are not sufficient to dampen the enthusiasm of projects looking to utilize the emerging technology in finding lasting solutions to the continent’s major problems.