Bitcoin shows signs it is vulnerable to a severe correction, Libra embarks on a massive U-turn to woo regulators, and Maker slapped with a $28-million lawsuit.

Weekend trap? Bitcoin hits $7,300 in attempt to finally break out

At the start of the week, we knew a big move for Bitcoin was brewing — but it was unclear whether or not the world’s biggest cryptocurrency was heading to $6,000 or $8,000. After a scary slip below $6,666, we got our answer on Thursday: BTC was heading upward. Bitcoin vaulted past $7,000 with ease and headed toward $7,300 as the weekend roared on. But wait a second. Cointelegraph analyst Michaël Van de Poppe has warned the gains may not be sustainable as volume starts to drop significantly in the markets. To make matters worse, three technical factors have emerged that show BTC is vulnerable to a severe correction: There’s a deviation from the descending trendline, the emergence of a fractal resembling the 2019 top and an increase of Tether supply. Search volumes for “Bitcoin halving” may have reached all-time highs this week, but it seems there’s a real risk it will be overshadowed by the coronavirus pandemic and the economic fallout.

COVID-19 continues to dominate the headlines. On Monday, the crypto-friendly payment firm Square Capital — which was founded by Twitter CEO Jack Dorsey — announced it was among the first Bitcoin-related companies to become an authorized lender under the U.S. government’s Paycheck Protection Program. It means Square can now provide small businesses with low-interest loans that will be 100% forgiven if used to cover approved costs. This is a big deal considering that many fintech firms have been struggling to participate. In other news, data from Coinbase suggests that a small portion of Americans may be using their coronavirus stimulus checks to buy crypto. The number of new deposits worth $1,200 — identical in value to the funds being sent to eligible consumers — has spiked in recent days.

Remember Libra, Facebook’s controversial stablecoin project that looked dead in the water after receiving a firm pushback from global regulators? It’s back. Sweeping changes have been made to Libra’s white paper with a view to making the product more palatable for governments and central banks. Now, single-currency stablecoins pegged to the U.S. dollar, pound and euro are going to be created alongside a Libra coin backed by a basket of assets. Plans for a permissionless network have now fallen by the wayside, limiting what people will be able to do on the network. We’re yet to see how lawmakers in Washington will respond to the watered-down measures. Although it may seem like this massive U-turn is great news for Bitcoin, economists such as John Vaz believe Libra could still be a threat to crypto. Whereas BTC continues to grapple with scalability concerns, Libra has been purpose-built as a payments network that can accommodate a surge in demand. Vaz warned that the project could quickly become a major competitor, not least because Facebook already has billions of users on its books.

A new class action lawsuit has been filed against the Maker Foundation, with the DeFi giant accused of misrepresenting the risks investors in the ecosystem faced. Maker allows crypto users to use ETH as collateral for loans paid using DAI stablecoins. But it is alleged that these “collateralized debt position holders” lost $8.325 million when Ether plummeted on March 12 because their ETH was auctioned off with $0 bids. The suit is demanding these funds are reimbursed and that $20 million in punitive damages is also paid as compensation. “The Maker Foundation neglected its responsibilities to its investors by either fostering or, at the very least, allowing the conditions that led to Black Thursday,” court documents filed in California add.

Venture capital firm Andreessen Horowitz may have plans for another crypto asset fund. A report in the Financial Times revealed it is looking to garner $450 million in crypto. It’s not clear at this stage how big the new crypto fund will be. Also going by the name a16z, Andreessen Horowitz has previously invested in Coinbase, and it’s also a financial backer of the Libra project. The company, which was established by Marc Andreessen and Ben Horowitz over 10 years ago, already has a $350-million crypto fund in operation. 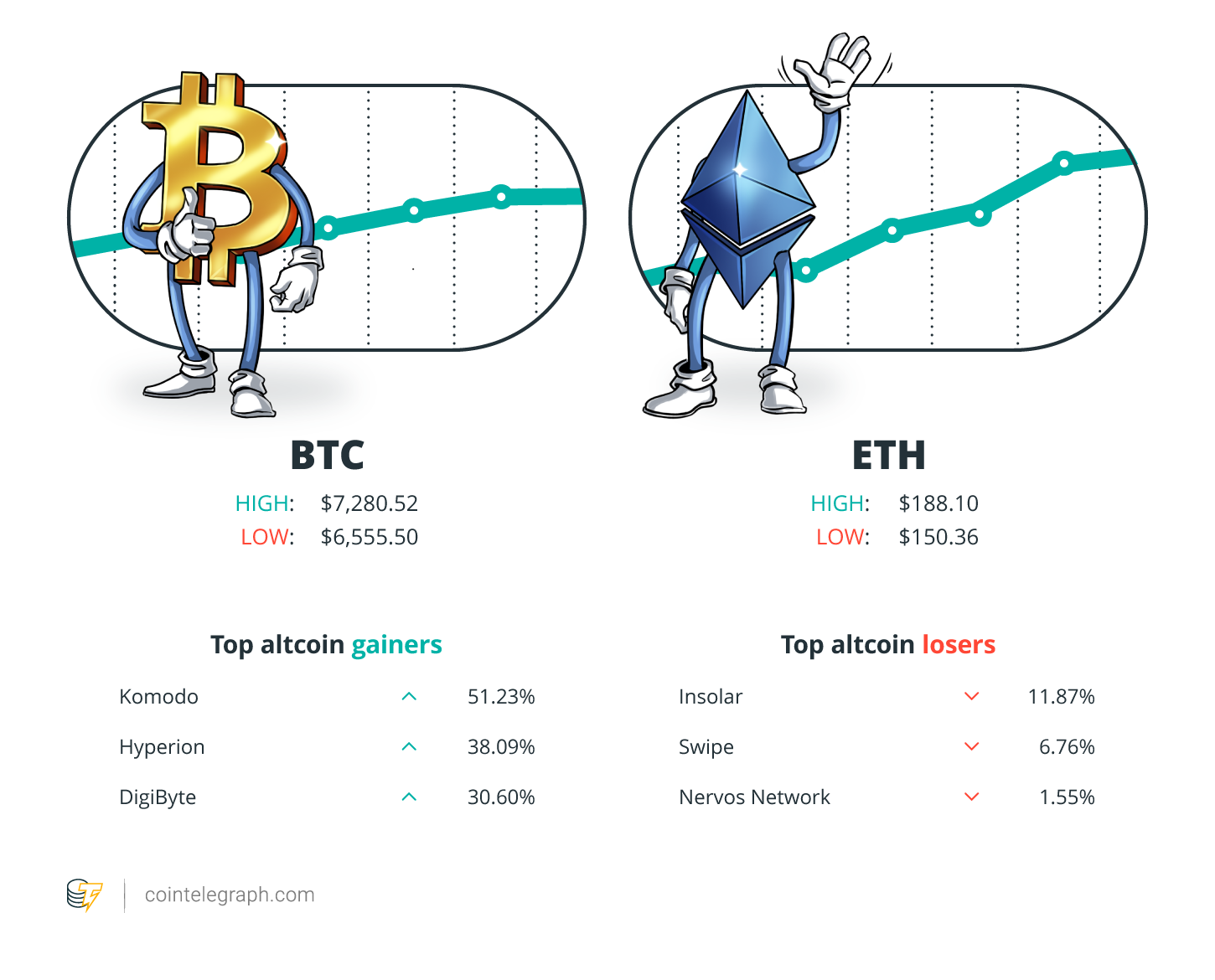 “The claims of a ceasefire made by ransomware groups are irrelevant [and] should be completely disregarded. Would you leave your front door unlocked simply because the local burglars had pinky-promised not to rob you? Probably not.” 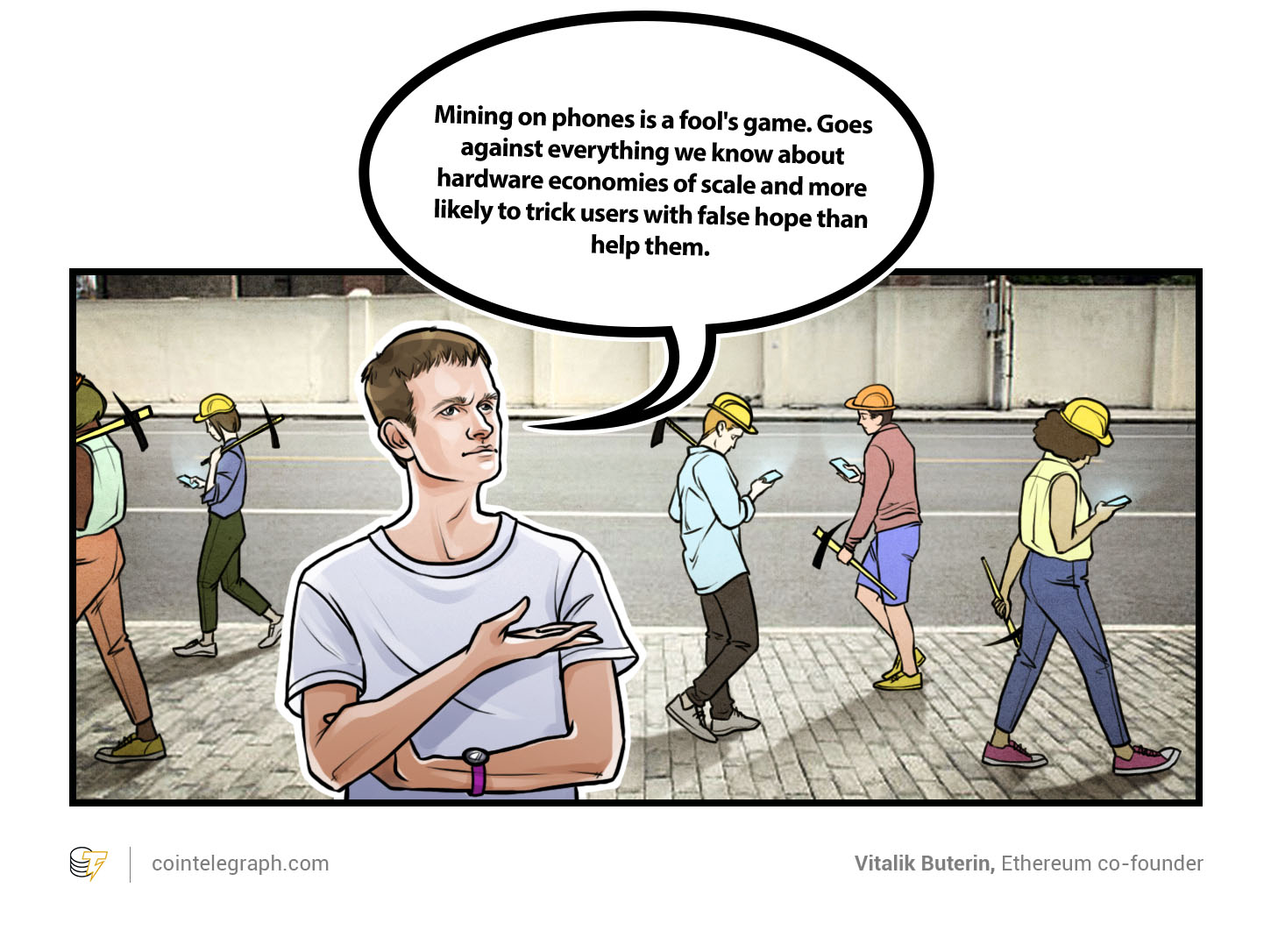 “Soon [it] will be difficult to value money. If so, all society’s values realign. Expect volatility.”

“There’s been a gargantuan explosion of phishing emails related to COVID-19. People are getting so many legitimate emails from their employers and vendors about the virus that ransomware attackers have an opportunity to blend in.” 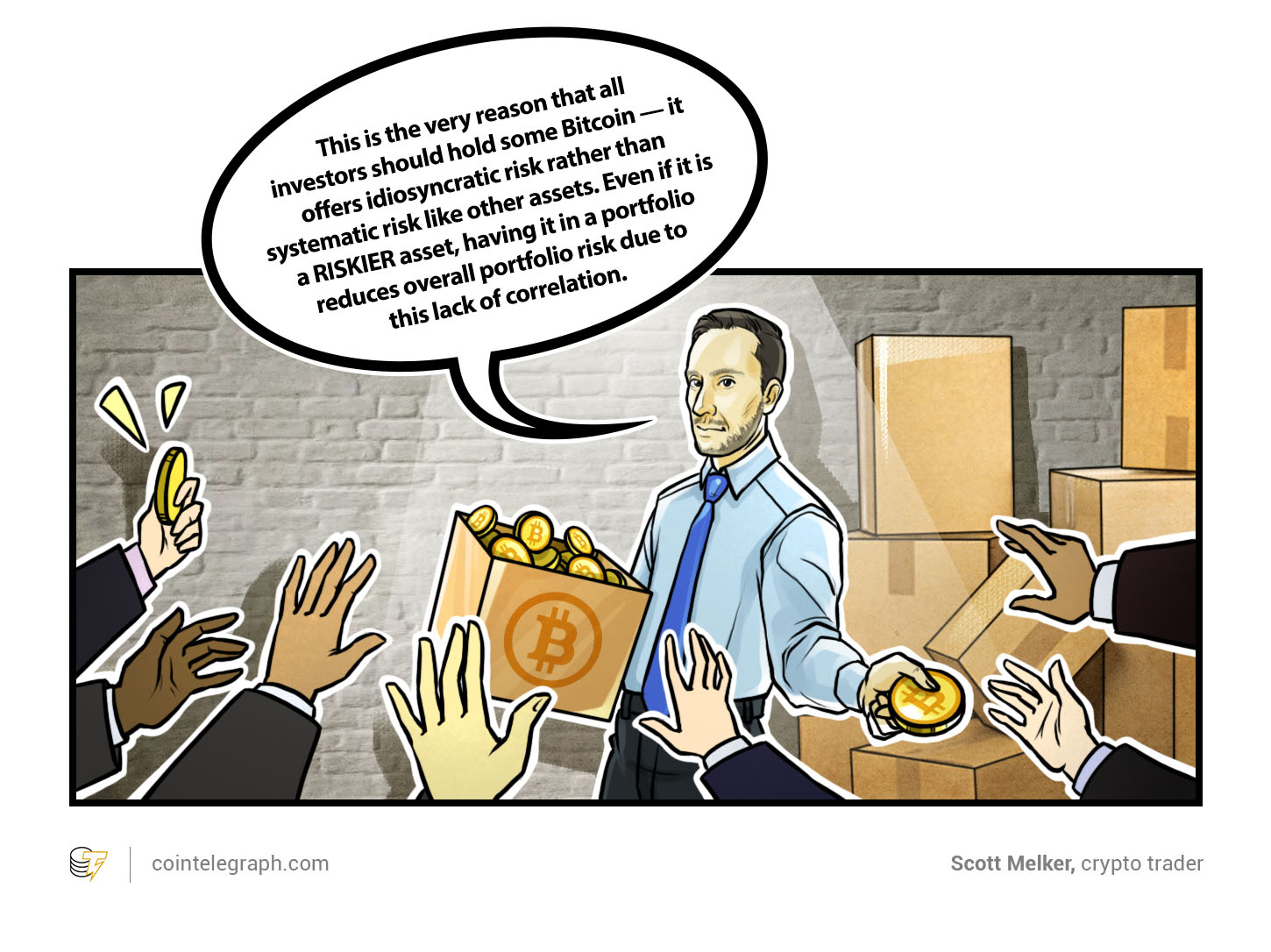 “CORONA CRISIS great for GOLD SILVER BITCOIN. US gov printing $10 trillion in FAKE US $ to save U.S.”

“The Maker Foundation neglected its responsibilities to its investors by either fostering or, at the very least, allowing the conditions that led to Black Thursday, all after actively soliciting millions of dollars of investment into its ecosystem.”

Speaking at the virtual BlockDown 2020 conference, Binance CEO Changpeng Zhao said he believes there are big things ahead for crypto. Although he admitted he was shocked by the impact that the aggressive pullback on global markets had on crypto, CZ insisted that trading activity has risen substantially and exchanges are “actually doing quite well.” He also believes that aggressive quantitative easing measures enforced in response to the coronavirus pandemic — where central banks effectively start printing new money — could spark a bull trend in the coming months. CZ added: “Mathematics works. If you increase supply of the fiat currency and Bitcoin is a limited asset, mathematics will eventually work.” 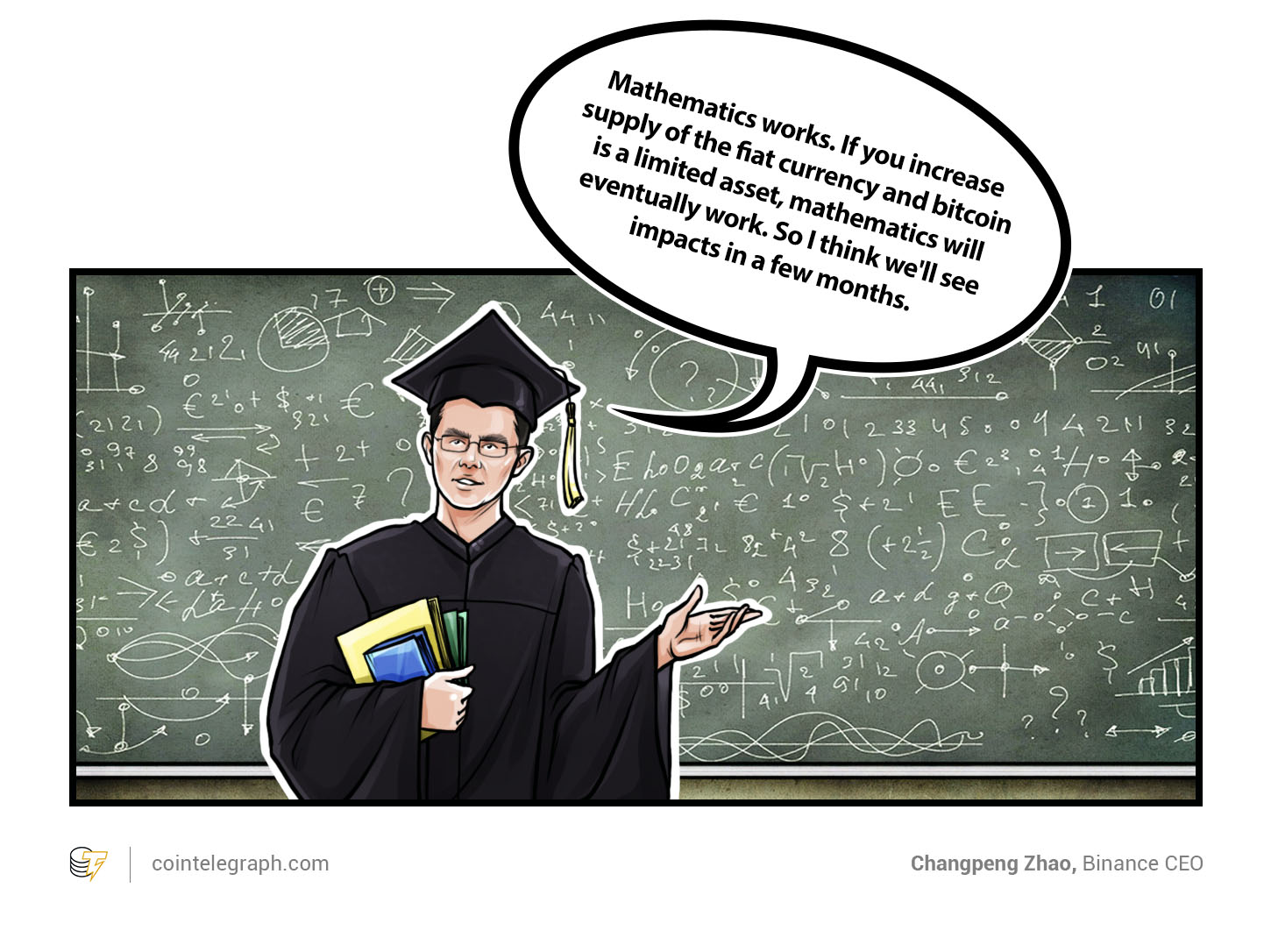 Ransomware groups may have made promises to halt their activity against medical organizations during the coronavirus pandemic, but one cybersecurity expert says these assurances should be taken with a massive pinch of salt. Emsisoft threat analyst Brett Callow told Cointelegraph that these promises are irrelevant, adding: “They’ve put lives at risk by attacking hospitals in the past, and it would be a mistake to assume that they would hesitate in doing so now.” He also compared taking these assurances at face value to leaving a front door unlocked because burglars had “pinky-promised” not to rob you.

Hospitals still being attacked despite big fall in ransomware

Perfectly proving Brett Callow’s point, a new report from Chainalysis this week found that hospitals are still being attacked by ransomware gangs. (That said, the overall number of attacks has dropped significantly since the coronavirus pandemic intensified in March.) The company’s senior economist, Kim Grauer, told Cointelegraph: “This is probably because they [hospitals] can’t afford to lose access to vital, often sensitive, patient data and, therefore, are considered more likely to pay up, especially during a health crisis.” She also cautioned that it’s difficult to accurately assess the true scale of ransomware incidents because there is a “massive underreporting problem.”

Criminals are selling COVID-19 infected blood on the darknet

Chainalysis also revealed this week that criminals claim to be selling coronavirus-infected blood on the darknet. These illicit marketplaces have not been immune to the adverse effects of the pandemic, with a 33% decline in the volume of cryptocurrency sent to scam addresses. In a new low for the darknet, one vendor claimed to be offering COVID-19-infected blood that was extracted from his hospitalized father that had been injected into bats. It’s not clear whether this listing is real or an attempt to scam users. To be fair, there are some signs that darknet operators are trying to take a dignified approach. Several venues have banned the sale of so-called COVID-19 “cures” altogether.

Journeys in blockchain: Akon of Akoin and Akon City

Darren Kleine speaks to the Grammy-nominated singer-turned-crypto evangelist who is looking to create an entire city in Senegal that’s a model for African financial empowerment.

Bolstered by the new coronavirus pandemic, scams continue to be rampant in the cryptocurrency world. As António Madeira explains, they still have the potential to hit the market where it hurts.

Some attorneys say this long-running court case may set legal precedents that could impact the future of Bitcoin. Andrew Singer has been speaking to them.