Bitcoin Dips Below $3,700 as All Top Cryptos See Severe Losses

All of the top 20 cryptocurrencies report severe losses, with Bitcoin tumbling below the $3,700 threshold.

Thursday, Jan. 10 — all of the top 20 cryptocurrencies are seeing severe losses in the 24 hours to press time. Bitcoin’s (BTC) price has dipped below the $3,700 mark, according to Coin360 data. 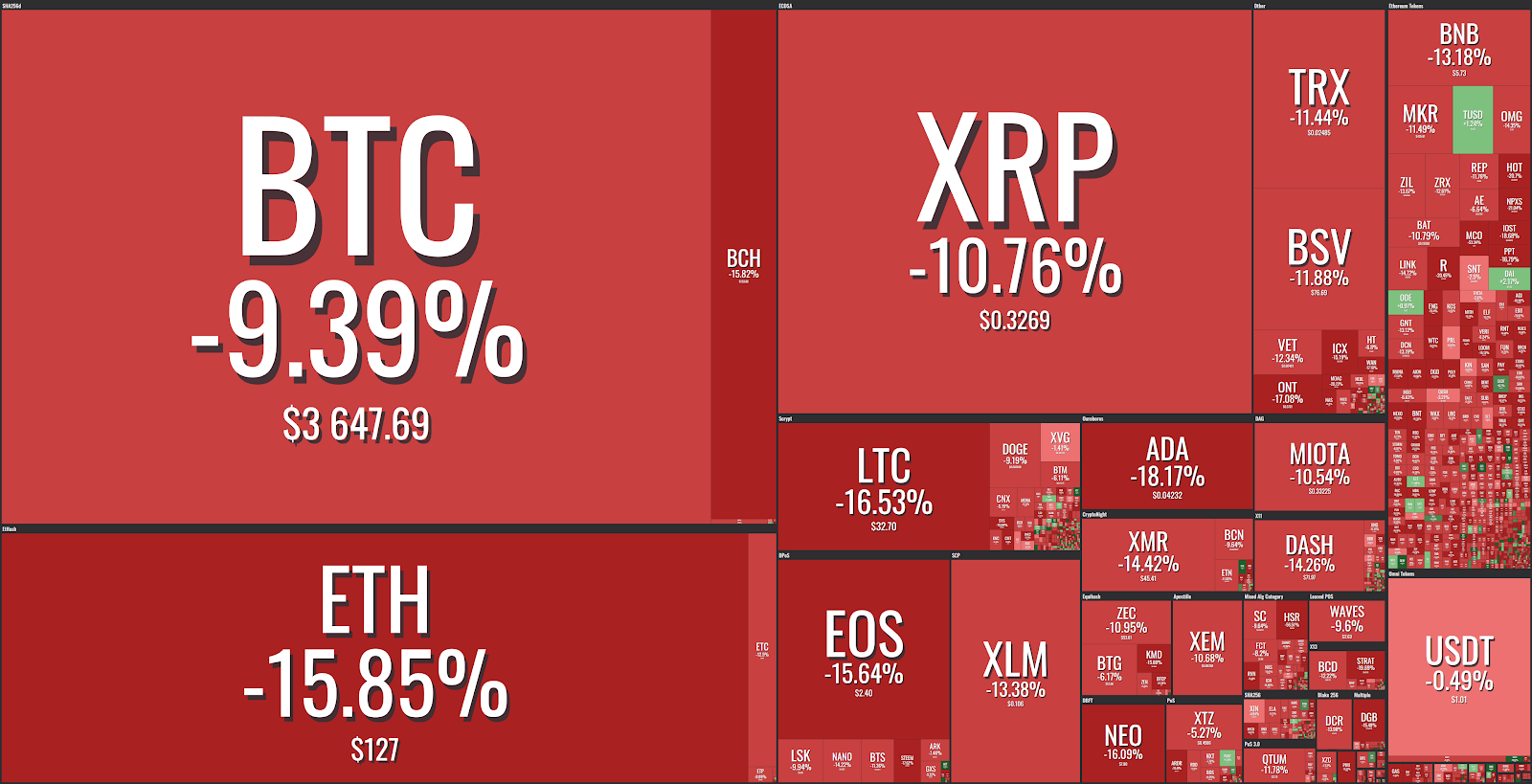 At press time, Bitcoin is down over 9 percent on the day, trading at around $3,661. Looking at its weekly chart, the current price is lower than $3,888, the price of BTC one week ago. The current Bitcoin value is also substantially lower than $4,108, its mid-week high reported on Tuesday.

Ripple (XRP) has regained its position as the second-largest cryptocurrency by market cap, overtaking Ethereum (ETH). Moreover, the divide between the two assets coins has shrinked, with Ethereum’s market cap being $13.3 billion and Ripple’s — $13.57 billion.

Ripple is down over 9 percent on the day, trading at around $0.33 at press time. On the weekly chart, the current price is lower than $0.364, the price at which the cryptocurrency started the week. XRP’s current price is also notably lower than its high of $0.381, reported earlier today.

Ethereum has seen its value decrease by about 16 percent over the last 24 hours. At press time, ETH is trading at around $127, having started the day around $151. On the weekly chart, Ethereum’s current value is significantly lower than $150, the price at which the coin started the week.

Among the top 20 cryptocurrencies, none are experiencing growth other than the stablecoin Tether (USDT), which grew by 0.65 percent in the last 24 hours. The cryptocurrencies reporting the most substantial losses in the top 20 by market cap are Iota and Neo, which are down over 16 percent.

As Cointelegraph reported today, a critical vulnerability that leaked sensitive user data has been discovered and quickly patched on the Nasdaq-powered cryptocurrency and tokenized stock exchange DX.Exchange.

Furthermore, news broke earlier today that several tobacco shops in Paris, France, have started selling Bitcoin despite a degree of regulatory uncertainty. Customers can reportedly purchase tickets for the sums of 50, 100 or 250 euros with an alphanumeric code and a QR code, which can then be used to obtain Bitcoin.