Most of the top 20 cryptocurrencies are reporting slight losses as Bitcoin hovers near the $5,100 mark.

Saturday, April 13 — most of the top 20 cryptocurrencies are reporting slight losses on the day by press time, as Bitcoin (BTC) hovers just over the $5,100 mark. 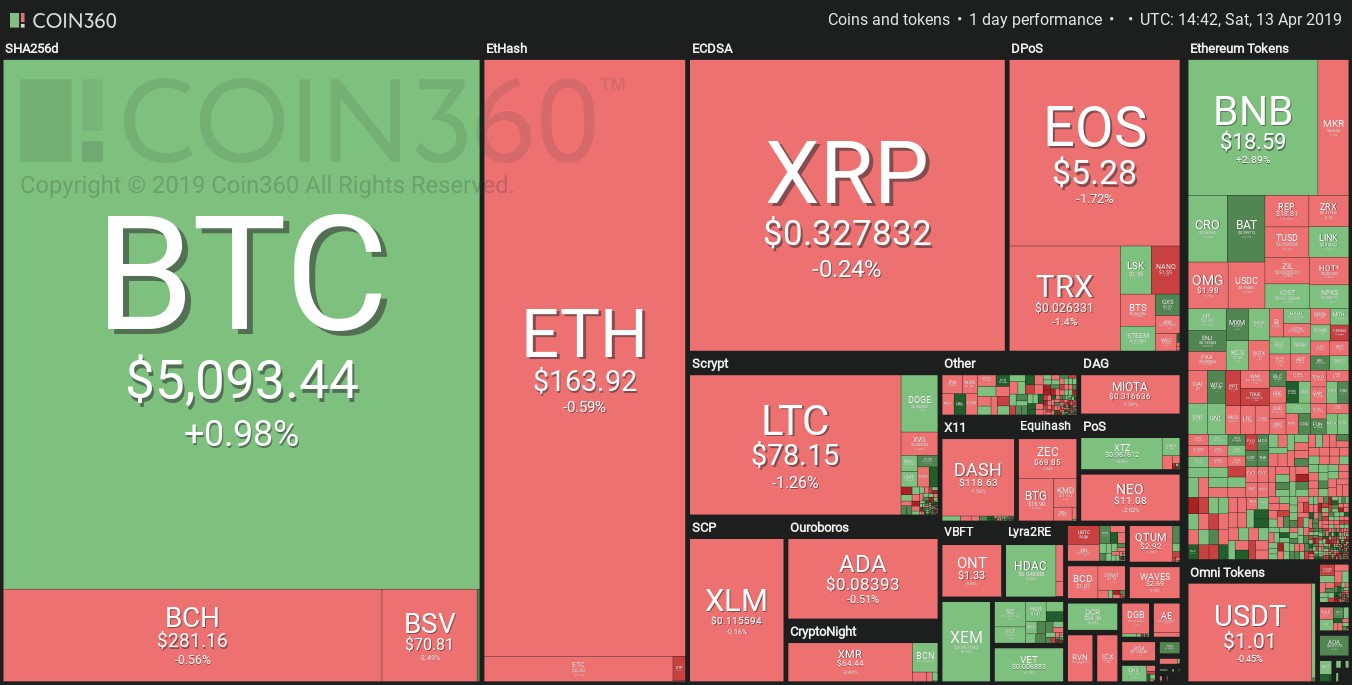 Bitcoin’s price is up about half a percent on the day, trading at around $5,107 by press time, according to CoinMarketCap. Looking at its weekly chart, the current price is also just half a percent higher than the price at which Bitcoin started the week.

Ethereum (ETH) is holding onto its position as the largest altcoin by market cap, which is at about $17.4 billion. The second-largest altcoin, Ripple (XRP), has a market cap of about $13.7 billion by press time.

ETH has seen almost no change over the last 24 hours, down a fraction of a percent. At press time, ETH is trading around $165. On the week, the coin has also seen almost no gross change, but reported a mid-week high of $184 on Monday.

During a recent developer meeting this week, Ethereum core developers stated that they are considering more frequent and smaller hard forks.

Second-largest altcoin Ripple is also seeing fractional losses over the 24 hours to press time and is currently trading at around $0.327. Looking at the coin’s weekly chart, however, its current price over 8% lower than what it reported one week ago.

Among the top 20 cryptocurrencies, the only one reporting notable gains is Binance Coin (BNB), which is up almost three percent. BNB has seen slightly more gains on the week.

The total market cap of all cryptocurrencies is currently equivalent to $173.1 billion, which is close to two percent lower than $175.6, the value it reported a week ago.

As Cointelegraph reported yesterday, French insurance markets can now invest in cryptocurrencies, following the passage of a new law.

The report released by BitMEX Research claims that BSV miners perceived a negative gross profit margin of 12% since the coin was created in a hard fork that split Bitcoin Cash (BCH).