Bitcoin in the Palm of Your Hand — Crypto Hardware Wallets Review

A breakdown of seven hardware wallet devices to help choose the one that fits every need.

A hardware wallet may just be the safest way to store cryptocurrency for average users. Nowadays, many different devices are trying to tackle the challenges of secure crypto asset storage. In this article, Cointelegraph will review some of the most well-known hardware wallets and compare their features. 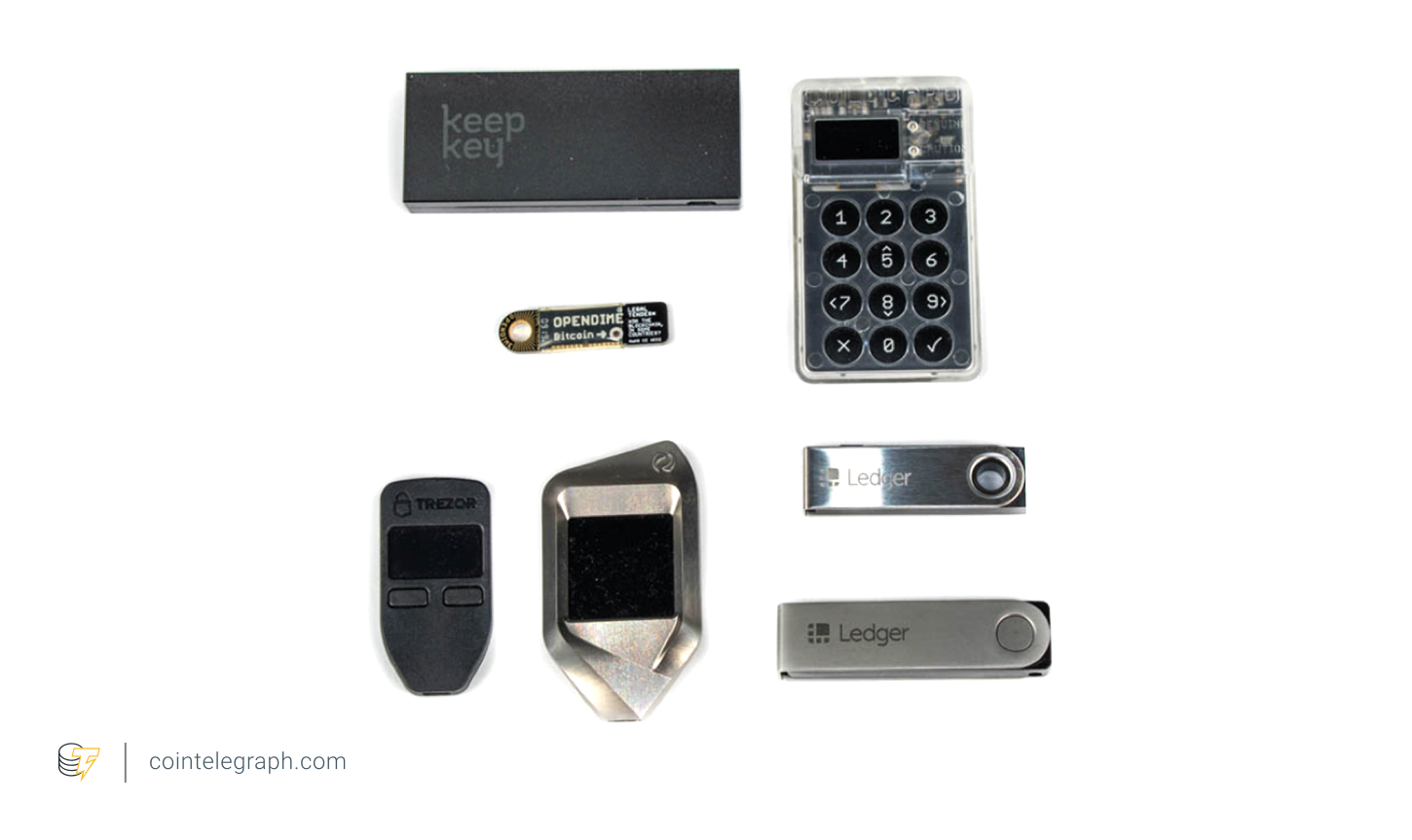 The cryptocurrency wallets that will be covered in this article are Ledger’s Nano X and Nano S, SatoshiLabs’s Trezor One and Trezor Model T, ShapeShift’s KeepKey, and Coinkite’s Coldcard and Opendime. It is also important to point out that all the wallets tested in this article, other than the Ledger Nano S (which was already owned), have been provided by the producers, free of charge.

Ledger’s Nano S and Nano X are similar devices when it comes to their functionality. Both interact with the same software, run the same applications and support the same cryptocurrencies, according to the firm’s official website.

The Nano X is different from all the other devices in this article because it is the only one that is rechargeable and works wirelessly via Bluetooth. However, during the tests, the device’s wireless connectivity was only functional with the Ledger Live mobile application.

Ledger Live allows users to update the device and to manage a significant portion of the crypto assets supported by the device. The rest of the assets are accessible through third-party software that is compatible with the hardware wallet.

Another advantage that the Nano X has over the Nano S is the larger and higher resolution screen. While no one will be watching movies on either device, the fact that an entire wallet address fits on the screen helps when checking where the assets are being sent.

The Nano S can hold fewer — under 10 in the tests — applications than the Nano X, which is advertised to hold up to 100. Not having the app of a crypto asset installed precludes the ability to manage it, but uninstalling and reinstalling the application does not imply a loss of cryptocurrency. Consequently, the limitation in the number of installed apps of the Nano S results only in a minor inconvenience.

Both wallets can be used on mobile devices, but the Nano S only works with a USB on-the-go cable. Third-party mobile apps also support both the Nano X and S. The Nano X is available on the official Ledger website for around $120, while the Nano S is just short of $60.

The SatoshiLabs’s Trezor One and Trezor Model T hardware wallets, on the other hand, share fewer similarities than the Ledger devices. The Model T  has a larger color touch screen than the One, a micro SD card slot and a reversible USB C connector. Yet, both support about 1,000 crypto assets.

The micro SD card slot in the Model T allows for signing transactions in an offline environment and saving them onto the memory card. The transactions could then be transmitted to the network from a second device that is connected to the internet. However, this functionality has not been added to the device yet.

In order to operate Trezor, the hardware wallet needs to be connected to a computer or a mobile device that runs dedicated software. This software can be Trezor's purpose-built Google Chrome browser extension or a third-party, web-based wallet. Moreover, the device has all the expected functionalities, as well as an intuitive user interface. Like Ledger’s devices, the Trezor hardware wallets are also supported by a long list of third-party software wallets.

SatoshiLabs also provides a mobile wallet that allows device initialization, recovery, label change, pin change, passphrase management, firmware upgrade and a full device wipe. Mobile wallets, such as Mycelium or Walleth, allow users to manage their crypto assets from a mobile device, although only via a cable.

Furthermore, the Trezor web-based wallet can also be accessed through the Android version of Google Chrome when the wallet is connected to the mobile device. According to the company’s website, the Trezor One is available for $55, while the Trezor T is just a little short of $170. The Corazon Titanium Trezor Model T — sold by Gray in a partnership with Trezor — costs about four times more than the standard version, which was also tested.

Although it’s lesser-known but is still a major player on the market, the KeepKey surprises with its large black and white screen and premium feel. The materials used for the front of the device make it hard to clean and can be easily scratched.

The device is significantly larger than the other ones in this list, and the number of digital assets supported is severely limited when compared with Trezor and Ledger hardware wallets. The KeepKey supports eight cryptocurrencies but also allows users to manage all their Ethereum-based tokens compliant with the ERC-20 standard.

During the testing phase of the review, some bugs were encountered in the dedicated software. The application stopped during an attempt to add an account, and it ran into multiple issues when unlocking the wallet.

Fortunately, no such bugs interfered when testing the beta version of the cryptocurrency management and trading interface developed by ShapeShift. It is worth pointing out that the ShapeShift service is not a KeepKey exclusive but is also supported in Ledger and Trezor devices.

ColdCard is an open-source hardware wallet that closely resembles a calculator and targets more tech-savvy users. The Opendime, on the other hand, is closer to a real-life version of the cyberpunk credit chips or a piggy bank than a traditional hardware wallet.

The Coldcard wallet only supports Bitcoin (BTC) and is the only wallet in this review that supports the Partially Signed Bitcoin Transactions format. This feature allows users to sign transactions, save them onto the SD card, and broadcast them at a later time — and co-sign them in the case of a multi-signature wallet.

The Opendime wallet is a single-use device that needs to be physically altered in order to spend the cryptocurrency. When it is first activated by inserting the device into the computer’s USB port, the user has to input random data onto its drive. The wallet then uses this data to generate a private–public key pair.

Once the device is initiated, users can see their public keys and send cryptocurrencies to it. What users cannot do is access the private key, which means they cannot move the coins.

In order to access the private key, the device's owner has to puncture the device in an indicated spot, permanently altering its electronic circuit. After piercing the Opendime device, users gain access to the private key that can be used to move the cryptocurrency to a software wallet.

This device can be viewed as a way to transform a digital currency into a physical currency. When accepting an Opendime as a means of payment, its balance can be verified while users can feel confident that no one will spend the balance without accessing the device.

This unique device is the perfect choice for some atypical situations. However, the fact that physical access to the Opendime device automatically translates into access to the cryptocurrency precludes its use in most cases.

Coinkite only sells the Bitcoin version of the Opendime device, but the Litecoin Foundation has one for Litecoin (LTC) as well. Coinkite’s official shop sells the Coldcard for a little under $120 and the Opendime in packs of three for just short of $45.

Views and beliefs expressed in the article are of the author, Cointelegraph does not endorse any of the products or projects mentioned.