Bitcoin Market Dominance: From 66% to 33% and Up Again

In the bull market from September to December 2017, Bitcoin occupied a 66 percent share of the total cryptocurrency market cap at its max.

However, the drastic change that occurred in December 2017 was likely due to investors learning there were opportunities to receive a higher reward if they invested in altcoins. Now that the some of the smoke has cleared surrounding the blockchain and cryptocurrency markets, and people no longer believe they will make a 100 percent return overnight — all combined with the uncertainty regarding the legal status of cryptocurrencies — Bitcoin is on its way back to dominating the market once again.

During that same period (September-December, 2018), Bitcoin generally occupied over 50 percent of the market cap for cryptocurrencies and reached its maximum market share of 66 percent on Dec. 7, 2018. 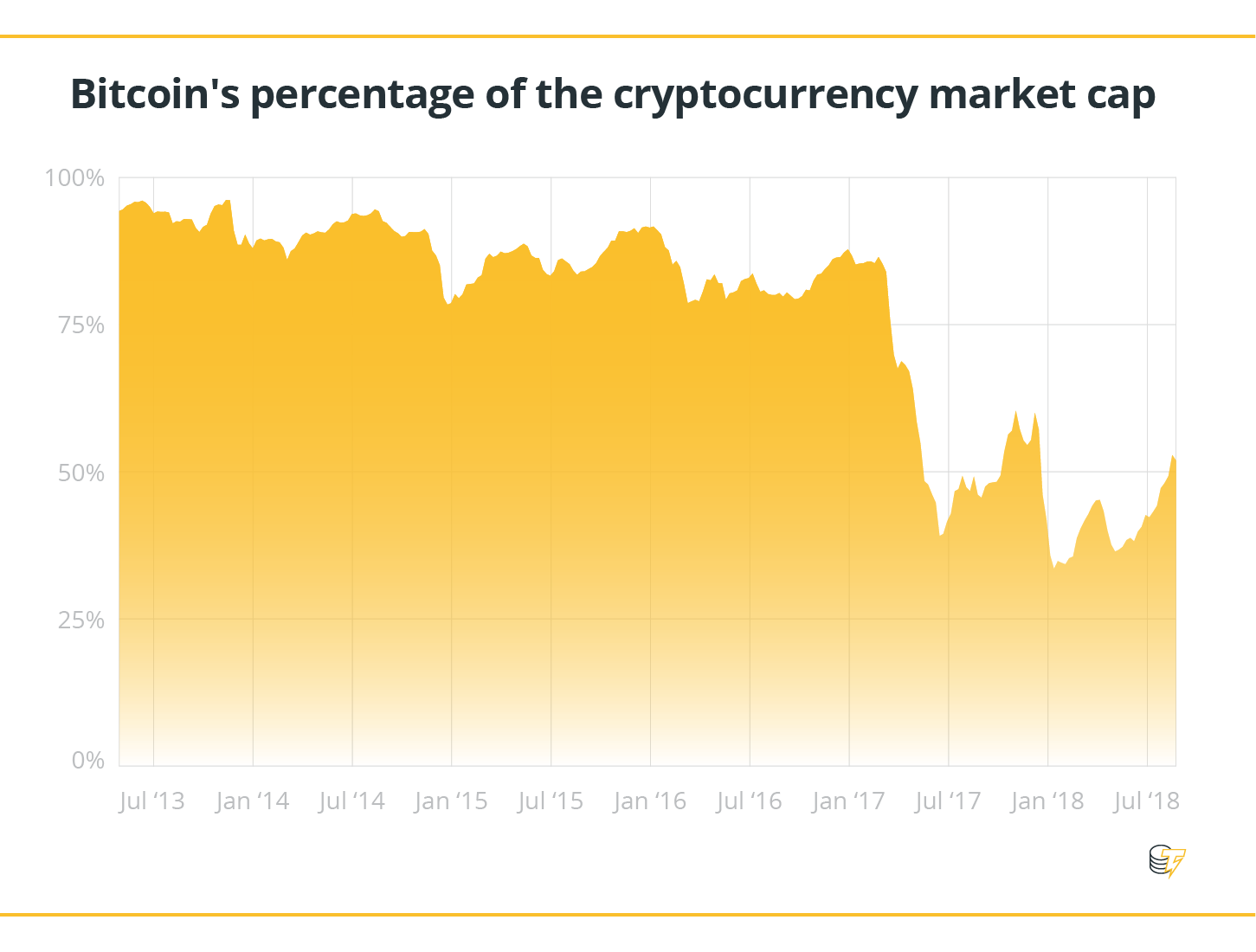 But as the bull market progressed and the price of Bitcoin increased, Bitcoin’s share of the cryptocurrency market cap decreased. When the price of Bitcoin reached its record high of nearly $20,000 on Dec. 17, Bitcoin’s market dominance dipped below 50 percent for the first time since September. Bitcoin declined past the 50 percent market share threshold on Dec. 19 — reaching a level of 48.26 percent — and from that point until mid-January, it was all downhill for BTC. Bitcoin’s market dominance continued to decline and its market share eventually hit an all-time low of 32.45 percent on Jan. 13, 2018.

What may have contributed to the nearly 18 percent decline in market share from December to January is the huge influx of main street investors who entered the cryptocurrency market. For retail investors, the psychological effect of seeing a price of an asset at $20,000 could be a bit intimidating, as those investors may not have deep enough pockets to take a risk. However, retail investors could definitely shell out some cash for cheaper coins, such as Ripple, which was under a dollar; Litecoin, which was under $100; and Ethereum, which had not breached the $1,000 level yet. Because cheaper options were more appealing and economically feasible for the average investor, a larger percentage of the cryptocurrency market cap was being allocated to coins less expensive than Bitcoin. 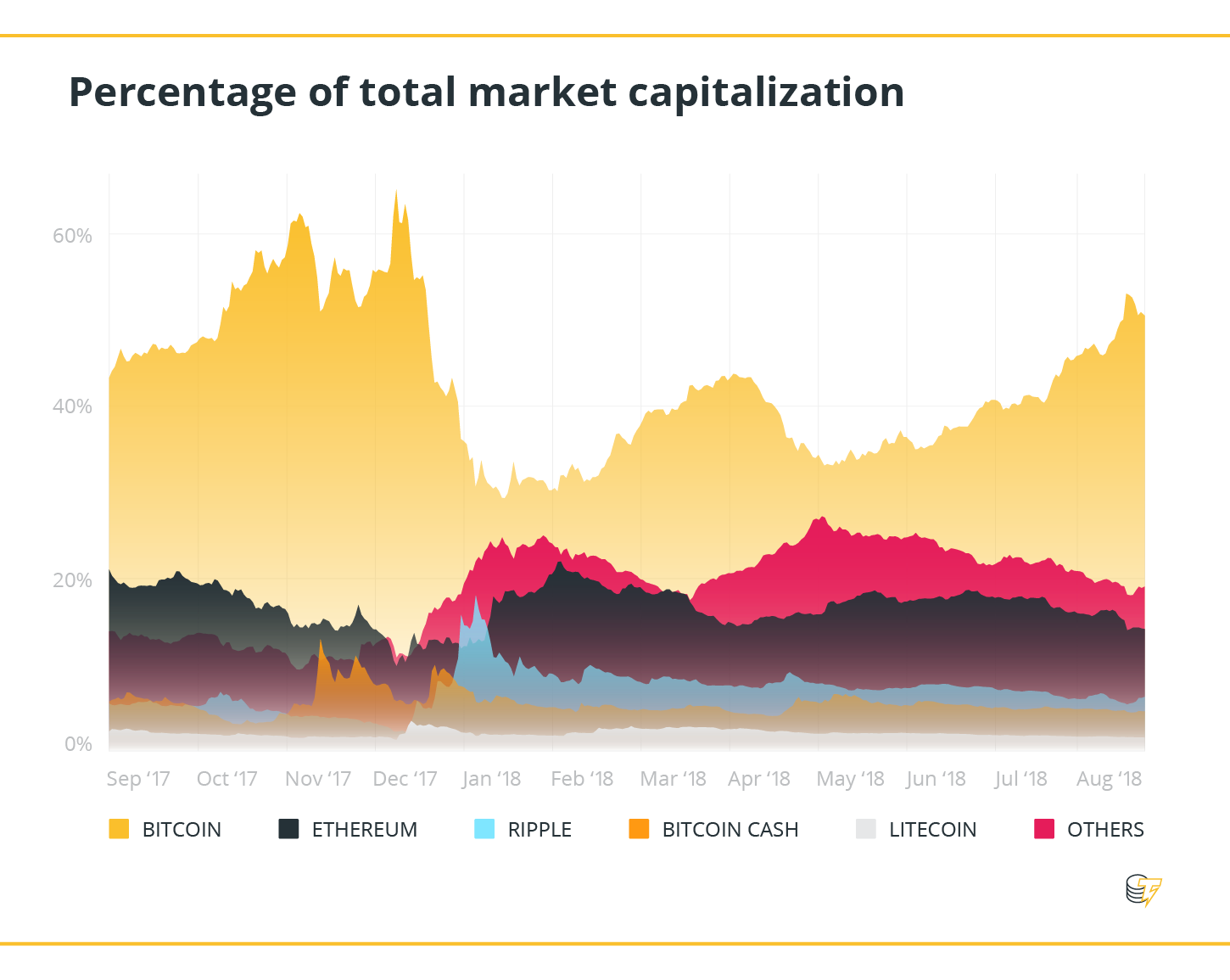 ThinkMarkets  chief analyst Naeem Aslam told Cointelegraph why he thinks Bitcoin’s percentage of the cryptocurrency market share was on the decline — until recently:

“Retail investors wanted to find the ‘next coin,’ given what we saw in 2017. More investors [were] interested in ICOs and in the altcoin market, [therefore, Bitcoin has seen a] major down trend since December. Recently, investors are going back into the major coins; investors are saying it's safer to stay in the top five coins by market cap.

“We [ThinkMarkets] did research where we looked at the performance of [the] top five [coins] on a quarterly basis with a $100,000 investment distributed by market cap, [we found that] quarterly gains are up to 68 percent. You are much safer by investing in the top five coins by market cap instead of going out there and being exotic.”

At first, the opportunities for wealth in altcoins were more enticing to investors than the possible rewards from investing in Bitcoin. During the September-December 2017 bull run, it was possible for people to invest in nearly any coin, ride it out and reap the reward. But when opportunities of that nature began to disappear from the market, investors felt like the best options for their money would come from investing in the top coins on the market. And this could be why Bitcoin has slowly been regaining its market share dominance.

Vladislav Shabanov, a managing partner at crypto hedge fund WhitePark Capital, seems to support Aslam’s statement. Shabanov believes that Bitcoin is regaining its market dominance because investors are interested in a quality investment rather than picking a racehorse and hoping for good odds.

“The crypto market and Bitcoin are still in an early period of development. We already witnessed a couple of huge corrections and we believe more is yet to come before the market becomes mature. During downtrends, altcoins tend to lose far more in percentage than Bitcoin; it’s rational to convert alt savings into Bitcoin to save the capital. Later, when [the market] recovery phase starts, investors will begin allocating their capital back into projects that they believe have potential.

“Some people might have lost faith or don’t see any improvement [happening in] the market anytime soon, so we see [a] ‘flight to quality.’ There might be another situation where people don’t want to lock up the losses — especially if they entered the market in December-February — and get out of the market, but instead are trying to play a safer bet and experience less volatility [by investing in Bitcoin]. It’s also the case that after such corrections, some coins never rebound. So it makes sense to wait for a better time [to invest in altcoins by] holding your investments in Bitcoin.”

So is the bear market over?

Maybe Bitcoin gaining a larger market share will lead to a reversal in the ongoing bear market and push us into a bull market. Or maybe the cryptocurrency market is resembling one of its earlier states before thousands of altcoins existed and Bitcoin was really the only viable investment option — as was the case from 2014-2017 when Bitcoin occupied over 80 percent of the market share on average. Shabanov believes that Bitcoin’s increasing market share isn’t necessarily a reason to get our hopes up, because markets typically work in cycles like this:

“When Bitcoin is in the bullish trend again, we expect the dominance will continue to decline because of the arrival of new coins with support from financial groups and — as already mentioned — reallocation of savings from Bitcoin back to existing projects. This process is natural. You can see that back in 2016, Bitcoin’s dominance was around 85-90 percent and basically the total market was represented by Bitcoin. But then the boom happened and lots of new projects appeared on the market, and they attracted attention from investors. Money started to flow from Bitcoin to altcoins, causing a decline in Bitcoin’s dominance.”

They say that when Bitcoin sneezes, the market catches a cold, so it would not be surprising to see altcoins thrive alongside Bitcoin and Bitcoin’s market share decrease because of it. But one thing is for sure, as long as sophisticated investors see chances to make money in the cryptocurrency market, money will follow those opportunities; for that reason, we may see the market shares by market capitalization continue to fluctuate.